Sometimes I get writers block.  Other times I just don't feel like writing.  Lately I just don't have the desire to write at all.  To be honest, I don't feel like doing much of anything.  My biggest feat in the last month has been that I cleaned the windows of the apartment I'm in.  I really only did it because I got to try out a water hose and nozzle I bought, but it was fun nonetheless.

I guess I should explain the title.  Some days I want to write blogs like I used to, and other days I just want to come on here and just say I'm done blogging.  I have to be honest, the second option seems to cross my mind more often lately, but I usually conclude if I don't actually announce it, then that book is still open.  So I can write whatever, whenever.  I guess what I'm saying is that I don't plan on ever calling it quits, but I don't expect to be a daily blogger anytime soon if ever again.  When I started this  I told myself I had to have a post limit to keep going to motivate me.  I knew once I slowed down, it would become harder to keep doing it, and that has been the case lately.  I just need to get motivated to do it.  Who knows maybe in a month or two I will, and will churn out 3 or 4 posts a week, but for now I'll be happy if I get one done a week.

Anyways, It's been a month since I last wrote, and I thought it was time for a post.  Last week I scanned quite a few things, so if I get the urge, I'll have stuff to post.  Today's post will be short though, but it will be about cards at least. 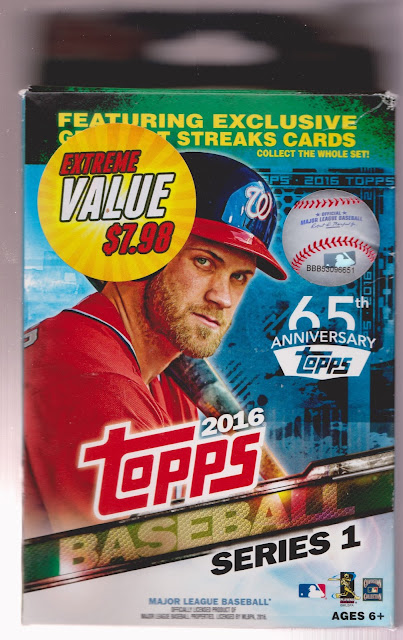 Everyone seems to be clamoring over the 2017 Topps set, but I just don't like the design.  I mentioned I wasn't going to buy any from this year, and so far I haven't.  I have been tempted to get some singles online (wait, the wording of that seems odd...) but I've swiped left on those as well (see what I did there?).  So instead I saw a box of 2016, and figured, why not try to finish the set off.

I made a mistake though.  Well, two actually.  While 8 bucks seems pretty fair, it's not that much of a discount, only a couple bucks, I thought I was getting a better deal.  Oh well, I wanted to open some cards.  The bigger mistake though was I have about 2/3rds of Series One, and as a result, most of the box were doubles.  So it wasn't a good investment for me, though I must say, I still got a few decent cards, so let's take a look. 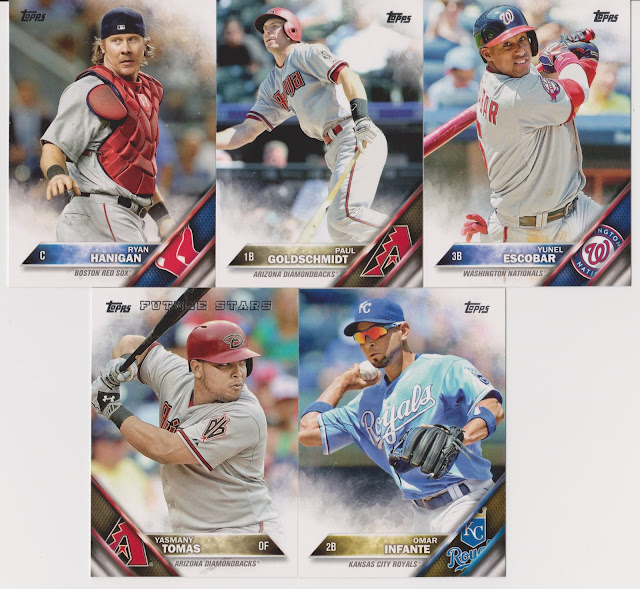 Who knew I still needed an Omar Infante card?  That seemed odd, but hey, I was happy to pull it.  I think by this time last year the Royals already released him.  I also got a couple Diamondbacks that I didn't have, and it was nice to pull the Goldschmidt.  Again, this box had a ton of duplicates.  I think out of the 64 or so base cards, all but 12 were doubles, maybe even less.  Maybe next time I go I can find a box of Series Two or Update, those I need more help with. 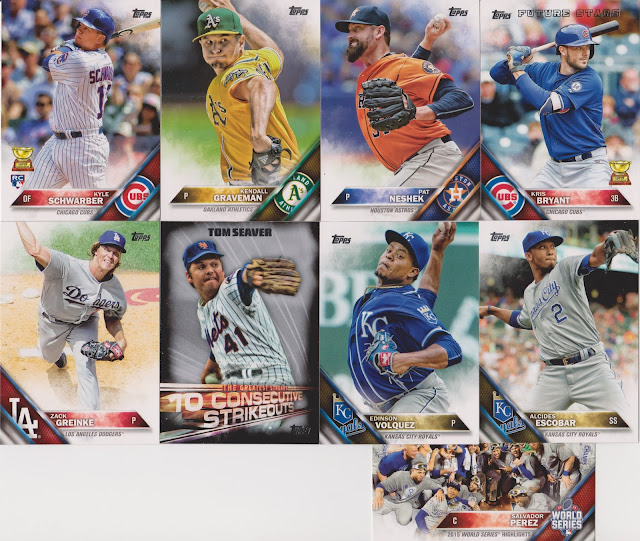 I think I needed all of the top row and the Greinke... maybe.  I can't remember anymore.  I know I already added them to my list on TCDB, so that's the important part.  I was happy to pull the Schwarber and Bryant cards.  The Graveman card I have already, but its the Chrome version.  I remember the facial expression, I won it off Listia last year.  The Neshek if it is a double maybe I'll send to get autographed through the mail, he seems to be an easy TTM signer and a good first time try for me.

The Royals cards I already had, but I'm not sure if I have them in my Royals collection already or in my set collection.  Either way, I'm covered now either way.  The Tom Seaver is a double, but is the only insert card that I got that was a double, so I'm happy about that.  I could have done much worse on an insert double. 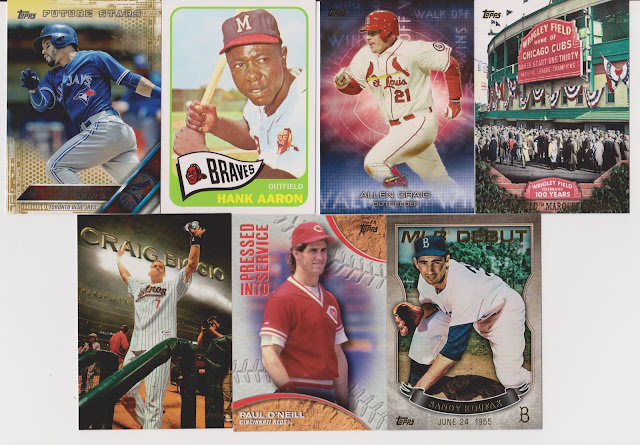 As for the inserts, I think I did a pretty good job on those.  While none of these guys really fit into my collections otherwise, I can still add them to my 2016 binder and who knows, maybe I can finish off some of those sets.  My favorite of the bunch is the Sandy Koufax.  I believe its the Gold version which is my first, and it will look nice with the rest of the set.  I'm still not crazy about most of the insert sets 2016 produced, but the MLB Debut was pretty great.

So not much to report on this box.  Did I get my money's worth?  Well, since so many were doubles, I can't say yes.  However if this was my first box I opened, I think I would have been pretty good on the price.  In fact, despite the risk, if I see another Series One box next time I go to my local Walmart for the same price, I might take a chance on it.

This box wasn't the only 2016 Topps cards I opened recently, so look out for more in upcoming posts.  When those might be, I'm not sure, but I have already scanned most if not all of them, so whenever I feel like writing, I'll share them.  Thanks so much for taking time and reading my blog, I really appreciate it.  I hope everyone has a safe and fun weekend.
3 comments: