According to the blogger stats, this is my 500th post.  I'm not disputing it, and usually I would be excited and have something big planned.  Though honestly I don't.  I haven't posted in a couple months and I could easily blame  whats been going on with the virus, but I just had other stuff to do, and I didn't feel like doing one.  Today I really don't want to do one either, but I needed to take a break from the newscycle and really had nothing else to do.  In my time away I haven't really done anything card related either.  It wasn't until this week that I logged into TCDB for the first time in almost two months.  Only then it was to catalog a card I won on Listia, which I'll show another day.  So how do I plan to celebrate my 500th post?  By cleaning up my computer with random stuff.  At least I made an effort to create a logo for it, which I might use again in the future. 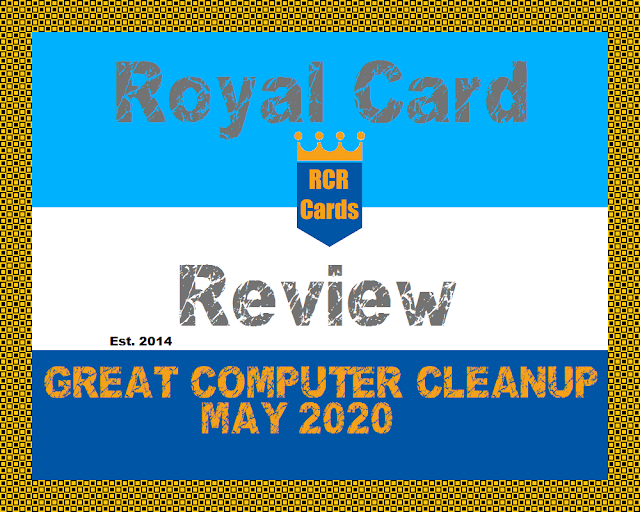 Look at all that hard work I did, took me three minutes, it took longer for it to upload on here.  Now I'll have to redo it for future issues.  Anyways, this will be a mix of random stuff I have on my laptop that I took pictures of for some reason or another and was meant just to have a little fun.  A couple of these I took pics of so I could possibly sell on Ebay, but we'll see.  Let's dive in. 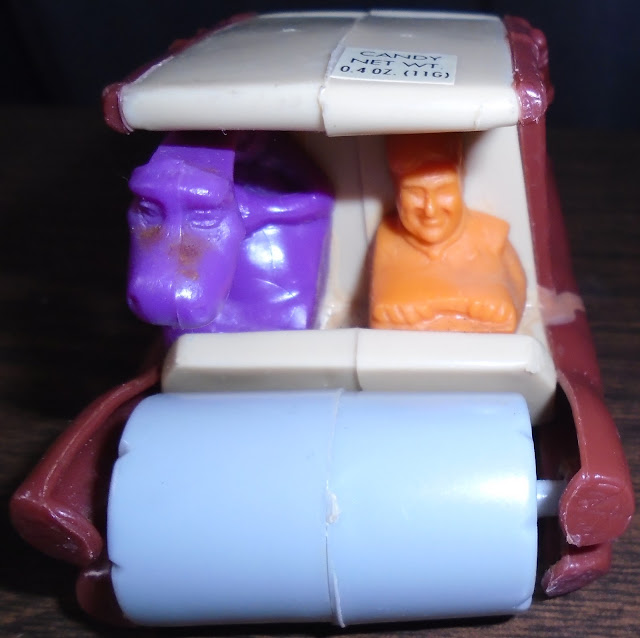 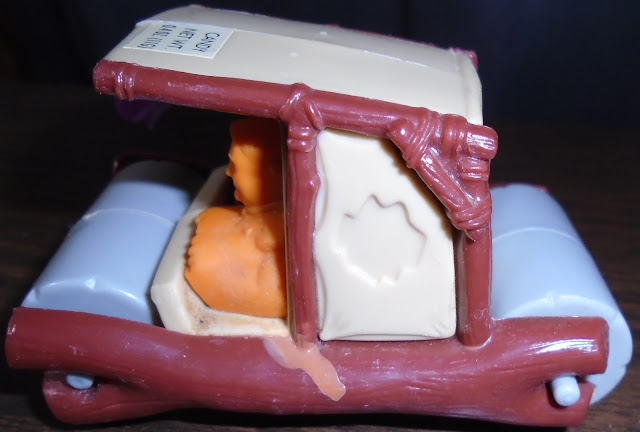 This was some sort of candy container that my dad had kept for some reason.  I'm not sure if I really want to keep it, but luckily there is no candy inside.  I admit I like the Flintstones, and liked the 1994 live action movie they made which I think this is from, but I don't see a reason for keeping it, even in photographic form. 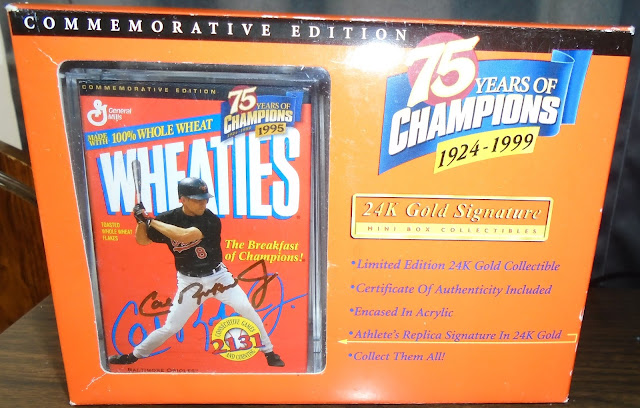 Another item in his collection was actually kinda my mom's.  She thought Cal Ripken Jr. had the prettiest eyes, and one day while shopping at a Dollar Tree type store (R.I.P. Deal$) we found this for a buck.  She has no interest in keeping it, and I'm tempted to look it up to see if it has value.  I have no desire to keep it but it does display well, so I might hold on to it for a bit. 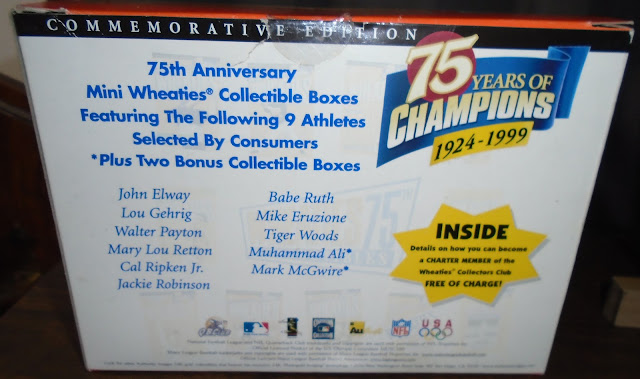 Here's the back of the box.  I never saw any of the others and really wouldn't care about getting the others.  Now if George Brett, Greg Maddux, or Roberto Clemente were included, I'd reconsider. 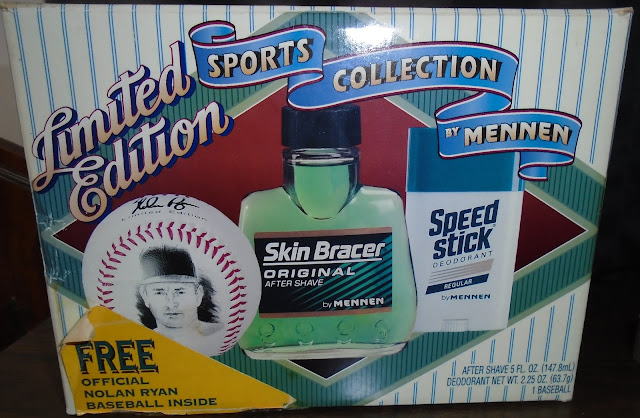 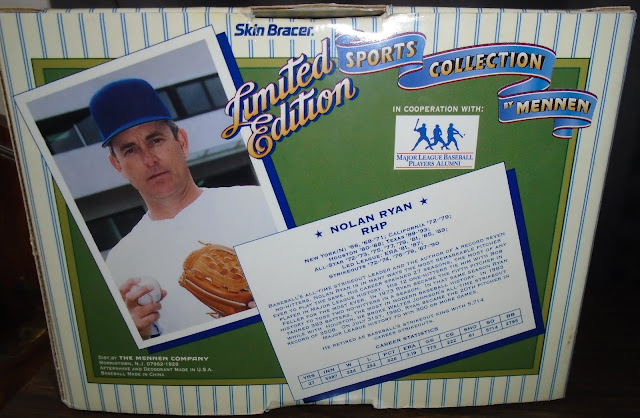 Thank goodness that aftershave was not still in this box, though it still had that smell.  You know that smell.  Though I wouldn't have been too mad if the bottle was cleaned out and still in the box, I might have displayed it.  I think if I ever became a billionaire I'd have like a whole house of just stuff on display that was old advertising- empty aftershave bottle in the bathroom and such.  Good thing I don't have money. 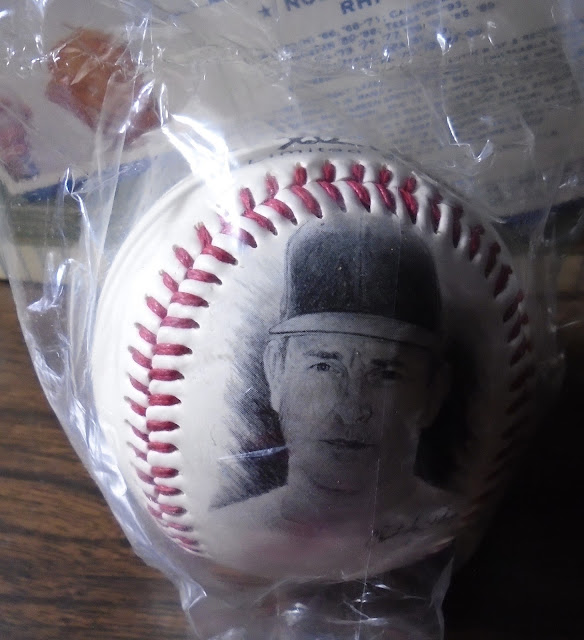 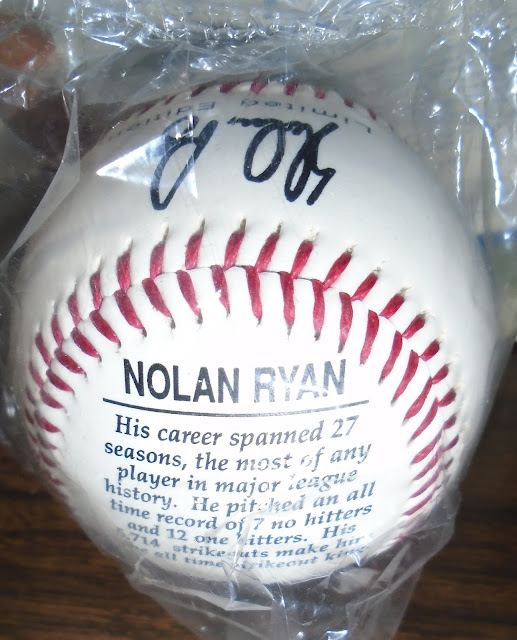 Inside the box was this baseball, so that was nice.  Still sealed too, so hopefully none of the aftershave smell made its way in. This would be another cool item to display, but I don't have much space to display a lot of stuff and right now I have to rotate stuff out every few months as it is, so I might see if this has value as well.  If not I have a friend who's a Ryan fan and I'm sure he'll like it.

Next I have something that will make me rich.  So rich that I can buy that house with all the empty bottles of aftershave to display. 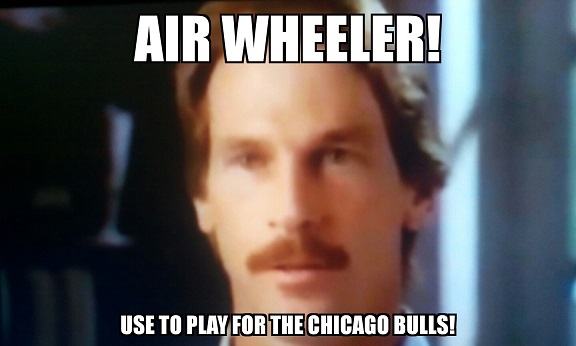 So those weren't what I wanted, but any Unsolved Mysteries fan might know what I was getting at.  I wanted a meme of Mr. Wheeler there saying his infamous line, "right, right, and my name is Michael Jordan, and I play for the Chicago Bulls".  Which is possibly my second favorite clip of all time from Unsolved Mysteries (the other is one I recently found related to the Epes Alabama Postal robbery).

Anyways, what am I getting at by all this? 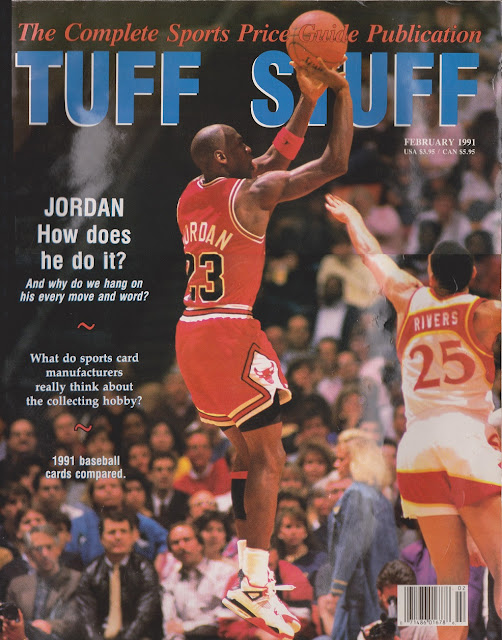 Not sure if I ever mentioned it here but in the last year I found an old Tuff Stuff magazine at my local second had store.  I was going to pass on it, but for the price I figured at worst I could scan it for the TCDB.  Inside though was what made my decision easier. 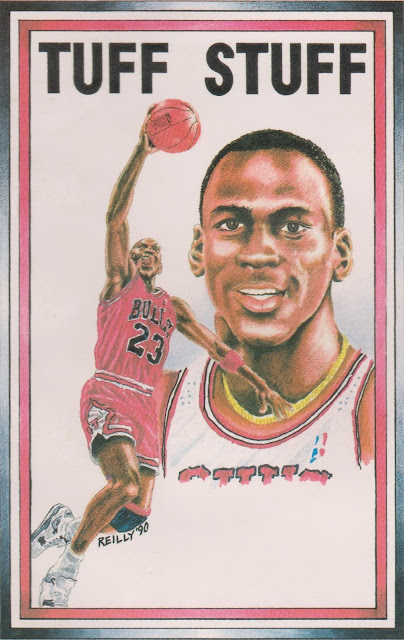 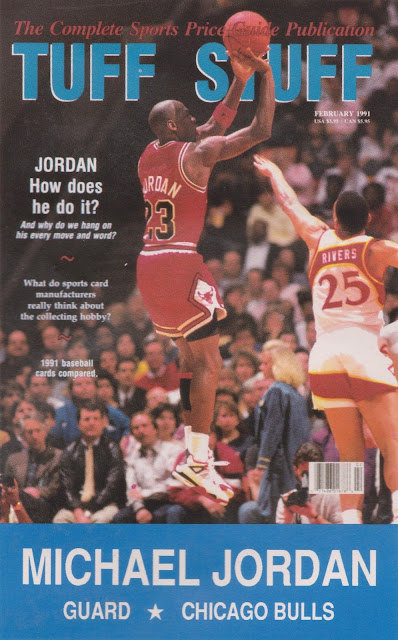 A couple of Jordan postcards, I was surprised they were still inside.  In reality I know these aren't worth millions of dollars, but since that documentary which I watched bits of, all Jordan stuff seems to be skyrocketing in price.  Too bad I plan on keeping these though.

Here is the back of the cards. 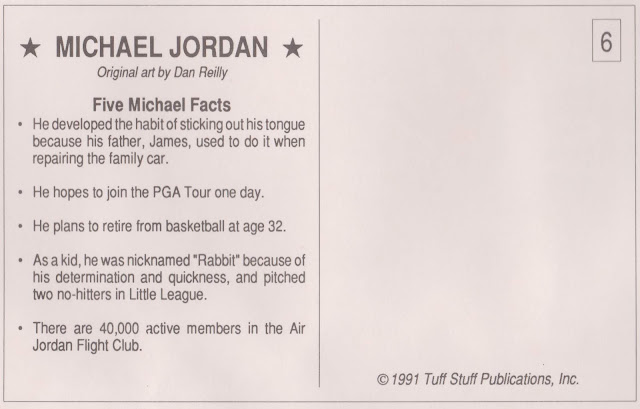 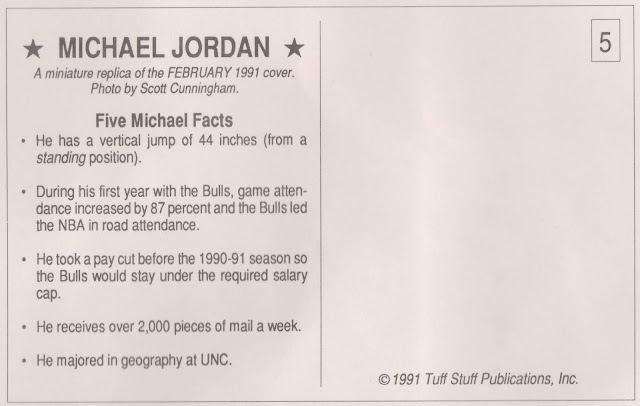 I should find something to display them with.  Right now its on one sheet, but if I cut them out, I might have a couple picture frames that I could put them in.  Hmm.

On the same trip I found another price guide. 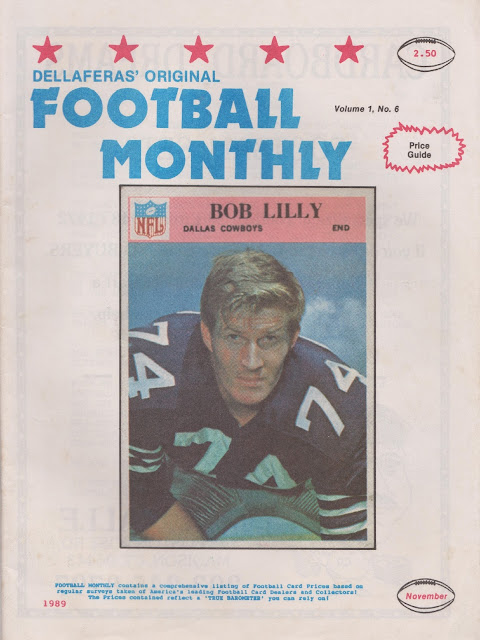 I actually enjoyed this one a bit more than the Tuff Stuff and on another day, maybe I'll scan the inside and show it off.  I didn't take other pictures so this is all that's on my computer for now.

Before I wrap it up, I have one more photo that I now think I've shown on here before. 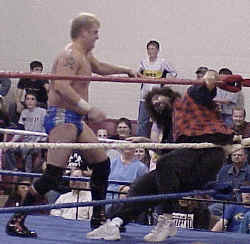 Sorry for the potato like quality, but this is straight from the archive of the Harley Race website.  This was one of Trevor Murdoch's last WLW shows before signing with WWE in 2005.  Here he is attacking Mick Foley, one of the nights special guests.  It was the night I met Foley, Harley Race, and Terry Funk.  The reason I kept this photo from their website is in between Trevor and Mick and a face in the crowd, the only face you can see totally.  That would be me.  I always thought it was cool that they took a photo and put it on their site and I was on their site.  Many years later and I still am amazed by this.

So with that I'll wrap things up.  I have more computer cleaning to do, so I'm sure we'll see more of these features in the coming months and hopefully more card related posts as well as the return of Savvy Loot series when I finally go and visit my local second hand store.  Until then, thanks for reading and have a great weekend, amidst all that going on in the world right now.
4 comments: