My stuff to show is ever expanding and I'm honestly over a year behind on stuff.  Yes, a year.  In 2017 around May or so I bought a big order from a website, and I just never posted it.  I'm not talking like a box, or a few packs.  It was pretty big.  I'm not sure if I ever even took pictures of everything and if I didn't I'll have to find the order slip to see what I did get.  Anyways, I figured today would be a clean up edition of stuff I've scanned or photographed in the last few months that I've never shown.  At least I think I never have.  Some I know I have, so I might not post them today, but there will be a few of these specials from time to time until I get caught up on stuff.  The problem though is I can't remember how I acquired everything, so some of it is a foggy memory, but if they were given to me, I'm pretty sure I thanked the person at the time I got them.  Anyways, let's see what's in my cleanup folder for today.  It's a wild mix of cards, sports, and whatever else I took pictures of.

Let's start with an EBay purchase I made in the last few months.  I found these pretty cheap and had some EBay bucks so I bought them.  Its a complete team set of Royals 1992 Topps Gold Winners cards.  I got them for about the price I would probably pay just for the Brett, so it was a good deal.  The only hiccup was cards with players from other teams weren't included, so some of the rookies I didn't get.  I'm okay with that, and once I update what I have I'll see what I still need and likely get it through COMC or something.  Still I'm happy to get most of them but do wish the seller would have specified that not EVERY Royal would be included. 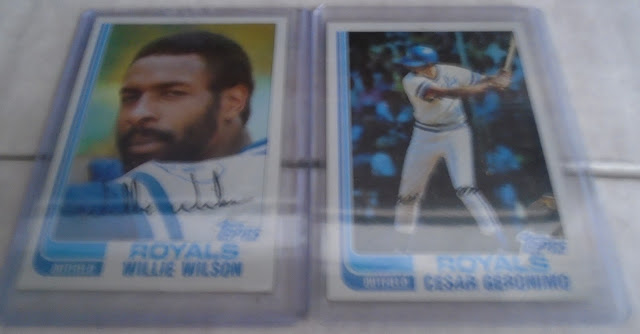 I got these from TCDB.  At the moment I can't remember who it was that sent them to me as a few people sent me cards this year, but I always thanked them in the Pay It Forward thread on the site.  I'm thinking C2Cigars sent these around Thanksgiving when he noticed they were on my want list.  It's nice somebody thought of me and that I could knock a couple older cards off my want list.  I didn't spend a lot of time on Royals cards last year, focusing more on organizing than collecting, but I hope this year I can focus more on it.  We'll see what happens.  First I need to finish sorting all the stuff I hope to part with. 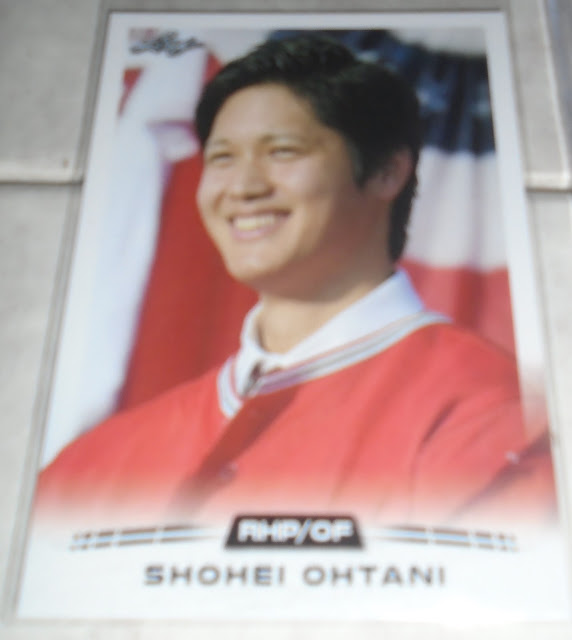 At some point in the year I had an itch to open a box of cards, and got one of those repack boxes at Walmart.  Included was an Ohtani card and this was it.  It's a nice card, and while I don't collect him, I did kind of get it just so I could have a couple of his cards.  However I was quite surprised as my box had a bonus card that 1:10 or 1:100 or something had. 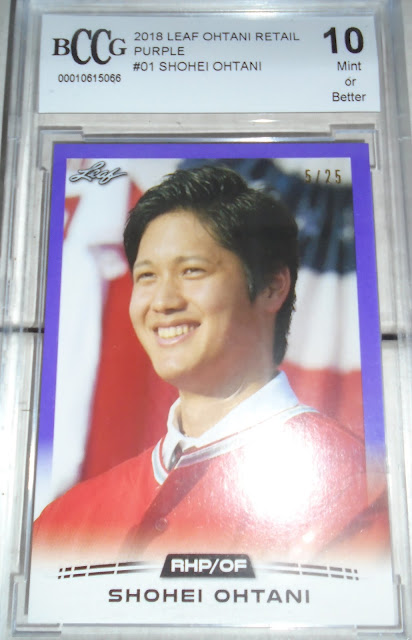 This was numbered /25 and its a low number too, which was pretty cool.  I had no intention of pulling it, and wasn't even really aware of it until I opened the box and found it.  I had to look back at the box to see the odds.  I thought about putting it on Ebay, but it was about the time he got hurt and figured I'd hold on to it until prices might go back up.  If they don't I still think I did good on the box.  The box itself promised 10 packs of cards and even now indicated you get 5 bonus packs of Triple Play cards.  So they tell you up front so you won't be too mad.  Hey 15 packs for 20 bucks is still a good deal. 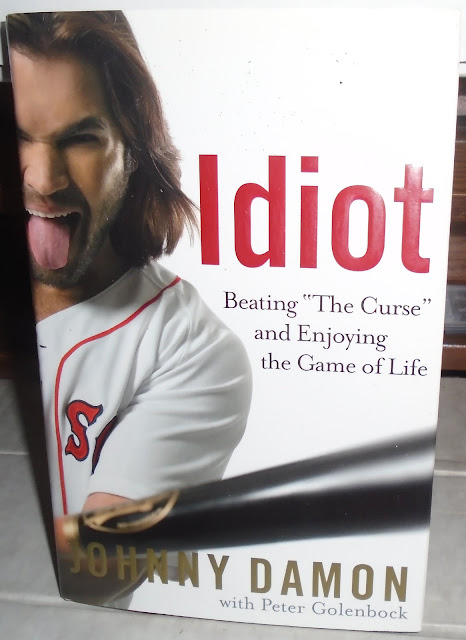 My sister got me a book called Idiot and I was the happiest brother ever.  How often does that happen?  I was happy because she remembered I was a big Johnny Damon fan and when she found this she knew I'd like it.  I don't make New Year's Resolutions, but I do hope I start reading some books this year.  Between this and the Clemente book she got me the year before, not to mention the countless books I've bought or received as gifts (like the autographed Booker T. book my friend got me), I have some reading to do.  Maybe this will be the year.  At the least maybe I'll build a bookshelf to display all of them. 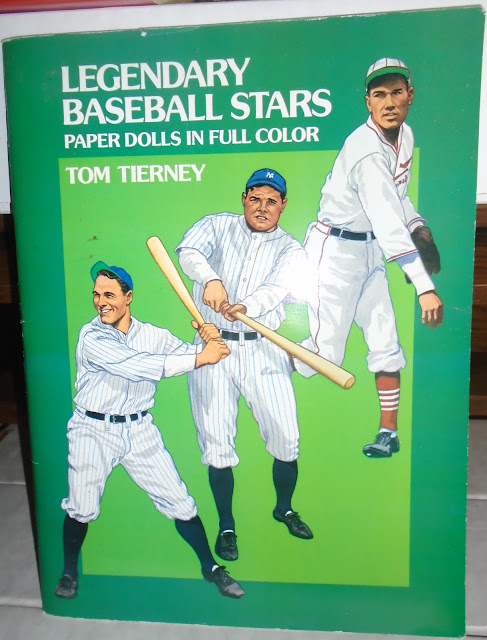 Another book my sister got me was this odd one.  You can make paper dolls of baseball players.  She thought I might like it and I do.  She didn't pay a lot of attention to who was in it, but I noticed that it was an old book.  It has to be mid 70's or so if I had to venture a guess.  No George Brett or Nolan Ryan, but some big names were in it. 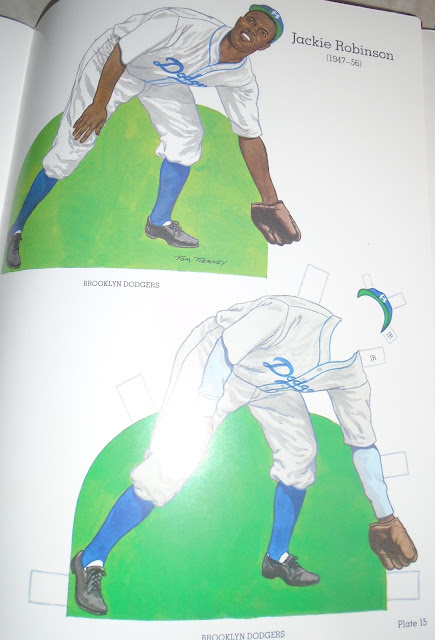 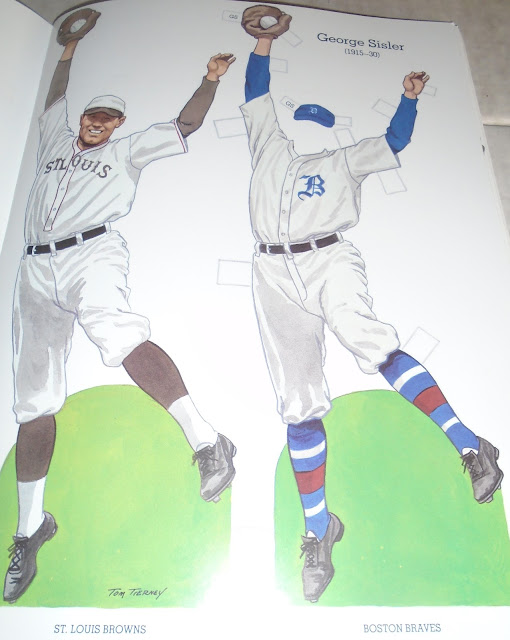 Sisler and Jackie Robinson stood out to me, and so I took pictures of them.  Sure there are some of Babe Ruth or Ty Cobb, but I picked these instead.  My sister didn't really look through it well she admitted, but I still liked it.  Then I looked at the last page and liked it even more. 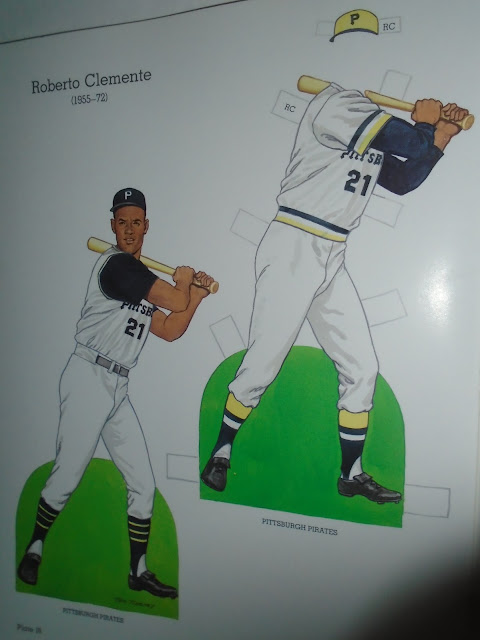 Roberto Clemente!  My sister was pretty excited when she saw that since she didn't even notice it.  I have no desire to cut these out or do anything other than just keep them in the book. 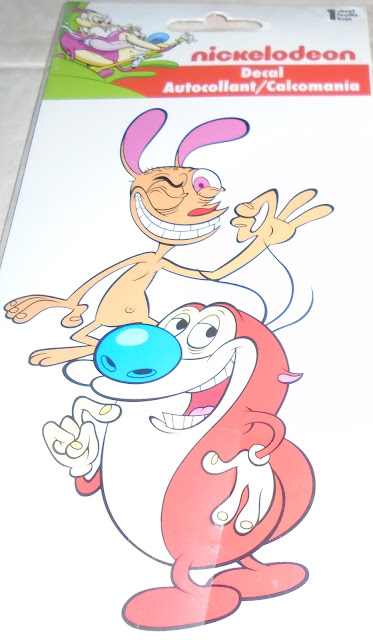 My sister also got me this Ren & Stimpy decal which I don't know where to put it but I like it.  I liked Ren & Stimpy a lot in the 90's and would like to see them again.

Next is some movies I bought recently, well, maybe October. 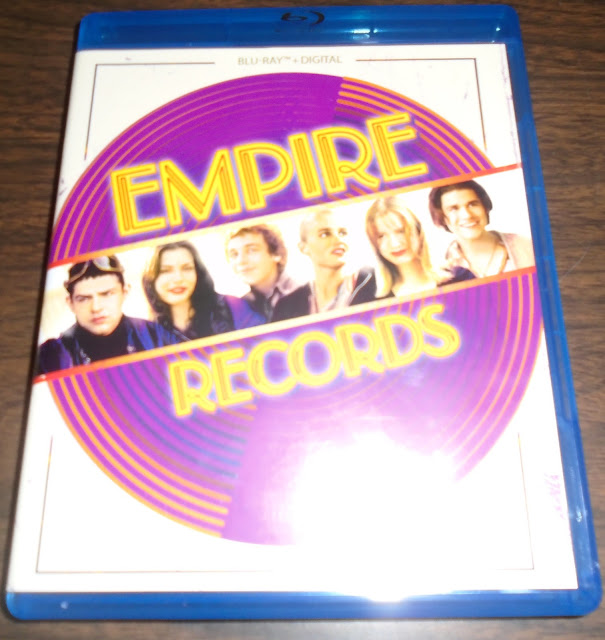 I recently tried to watch my DVD copy and it was scratched and I wanted to upgrade it, so I found this Blu Ray was released in 2018 and included the digital copy.  I've been wanting to upgrade anyways, so this was an easy choice to buy.  The only difference is I don't think there are that many extras on it as my DVD had, but lately I haven't watched extras all that much, so I'm okay with that. 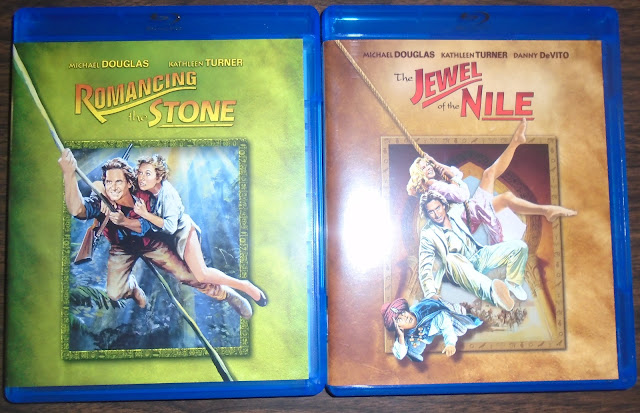 These two movies I've wanted to get on DVD for quite a while but either never found them or decided against it.  I found these on blu ray pretty cheap so I went ahead and got them.  This year I hope to watch more movies and keep track of them, and I think I will probably watch them soon. 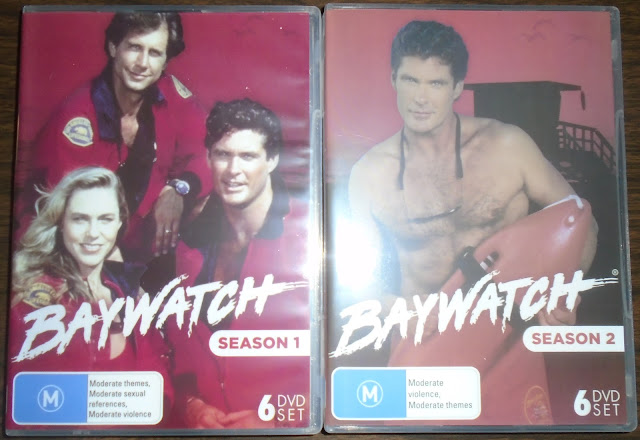 When I was growing up I was a big fan of Baywatch.  People laugh, but oddly I enjoyed the first two seasons much more than the Pamela Anderson years.  I thought the scripts were better and more dramatic.  Shawn Weatherly's character in the first season was amazing and if you never watched it, you should look it up on Youtube.  These were imports and I've yet to watch them much but the video quality seems sub par so I'm on the fence if I should have gotten them, but you live and learn.  I think I'll stay away from imports for now, but I am glad I get to see them again.

Next is an item I found on the 10 cent table at Savvy Seconds a few months ago, and was quite surprised I found them, but I was much more surprised when I got home.

All I saw was this and two I guess you call them finger skateboards.  A few years ago I jokingly told my youngest nephew if I ever became rich I'd buy a bunch and have some fun.  When I got home I noticed the bottom of this opened, and it is used for storage for other boards and materials. 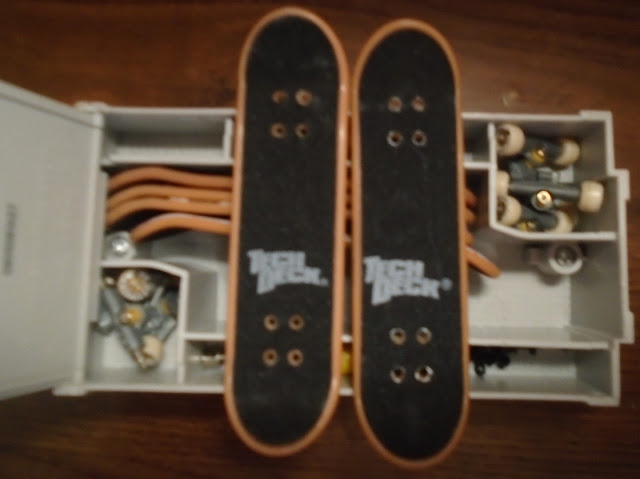 HOLY CRAP!  Look at all those decks!  Wheels too!  It even had the tools to change them out.  Even more surprisingly were the fact that most of it looked pretty new and not very used.  These came out after I was an adult so I didn't ever play with them, but I always thought they'd be cool to play with if I was a kid.  I haven't seen my nephew much lately but at Christmas I saw him, and I forgot to show him.  I'll have to remember the next time I see him.  At worst if I don't know what to do with these, I might put those tiny metalfigs on them and make them look a bit cooler.

So the last item to show today is a new purchase I made a few months back.  My local Walmart was clearancing out some wrestling action figures and I found one for 5 bucks. 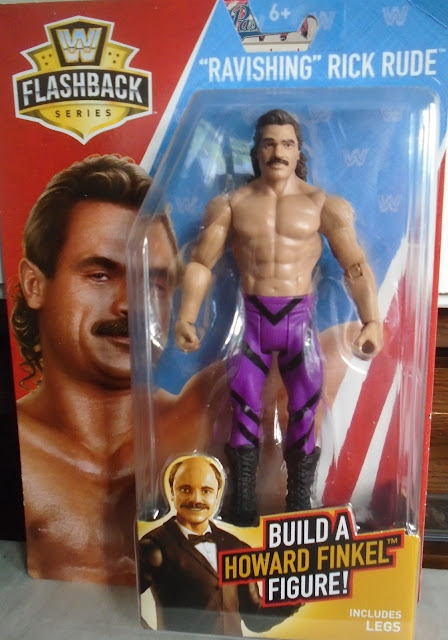 If I was smart, I would have bought all 4 from the set so I could built the Howard Finkel figure.  But I didn't because one of them was sold out, and I didn't really plan to open these, so I just wanted the Rick Rude.  Hopefully this year I will find a nice place to display all of these figures.  I might take my tins down for a while to display these, but once I get rid of some cards, I should have another shelf to display stuff.

So that about wraps it up for today.  I'm not sure how much I've cleaned up, but at least I can get rid of these pictures and see what else I have that I never posted.  I hope you all enjoyed and I tried to show off a variety.  I also hope everyone had a great New Year.  I didn't plan on setting any card goals this year, but I still hope to accomplish a lot this year.  Thanks everyone for reading and have a great day!
3 comments: