First let me point out two things about the title- first I realize its 2021 but what I have to show you today is all from 2020, maybe even before, so I didn't feel 2021 was correct.  Second, don't let the "finale" worry you, it's only a wrap up of 2020, not this blog.  While figuring out the future of this blog, I figured if I was going to start posting more often, and even if I didn't, I really needed to get caught up on cleaning up, so its better to clean up before scanning or taking pictures of more stuff.  As for the future of this blog, I will address that towards the end of the post, if I remember.  Long story short, I have no plans of ending it anytime soon.

So with all that out of the way, it was obvious that I didn't post much in 2020.  It wasn't by design, and I won't even blame the events of 2020 as the reason.  In reality, I was just in a rut and not sure what to write about.  I didn't collect too many cards in the last year, and for a few months hardly ever touched my cards.  I was working on other projects or interests in the last year and cards were the least of my thoughts.  However today, I do have some cards to show, so let's start with them. 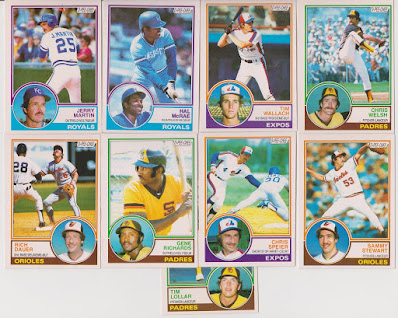 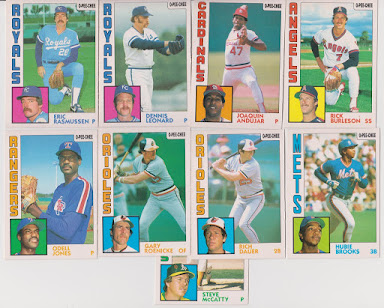 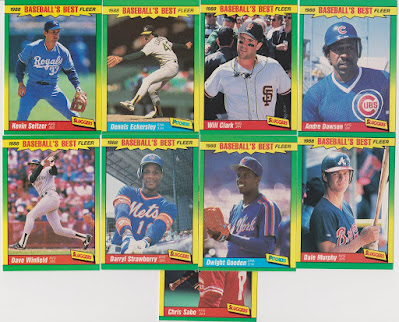 It wasn't until late in the year that I decided to give Listia another shot.  It was almost a year since I last attempted to bid on cards, but for a month or two I did win quite a bit.  Another win or two and my credits/points/whatever they call them this month will likely be depleted and at that point I'll decide if I want to stick around.  Though I didn't win a lot the last few years, I think I got a lot out of the site especially since I only put one dollar into my account throughout 8 years or so.  In return I got a ton of cards and even a complete set of Simpsons cards.  Maybe if I do stop buying on there I'll screenshot all the wins I had, or at least the better ones.  Over 200 wins and counting, that might make for a long post.  As for these cards, I bid primarily for the Royals cards, but I can't complain when I can add Eckersley and Winfield as well.  I have a feeling I will stick around on the site and build up my points again, just for the fact its not costing me anything.  Wins are harder to come by, but even getting 1-2 wins a year is pretty good. 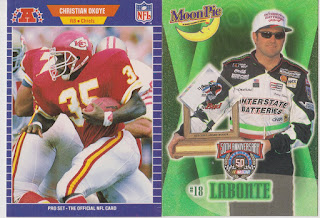 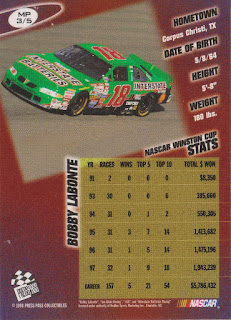 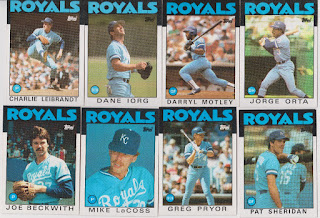 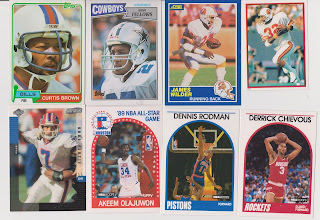 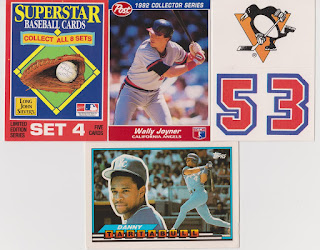 While trips to my local second hand store Savvy Seconds were few and far between, I did find quite a few cards there  during the year.  I've showcased them a few times during the year, but never sure if I ever got around to these.  Until the last year or two, cards weren't there so movies and music was what I looked at mainly, but for the last couple years, cards have been pretty steady and likely will be for a while.  I hope more come soon though because I've managed to pick through what they have now.  As for these oddball mix of cards, my focus was on the Royals, but I managed to fill in some PC's and even my Mizzou collection.  I predict by 2030 I will finish that Long John Silver's set, which is one of the few sets I'm building.  It would be nice to work on a Post set too, but let's not get ahead of ourselves.  Anyways, I think I'd rather build the 1993 Hostess set before I work on a Post set. 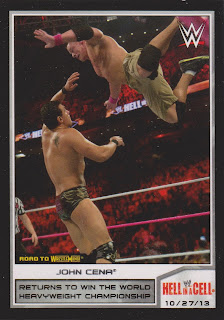 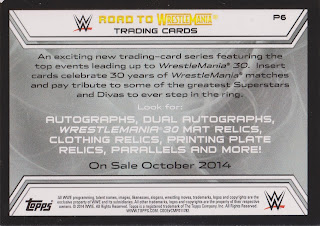 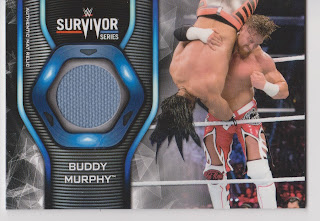 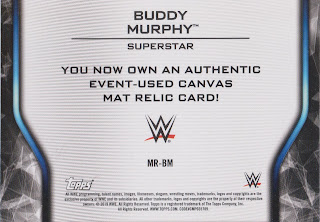 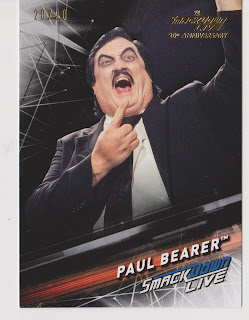 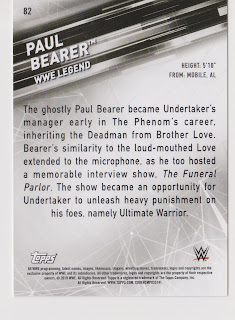 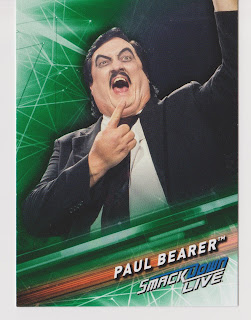 The Hell In A Cell card I've had for a few years, actually came in a DVD of Hell In A Cell.  I finally decided to scan it in 2020....PROGRESS!

The Steiner Brothers card was found while cleaning out a box in the storage unit I'm going to clean out at some point.  I forgot I still had any cards from that set but its a reminder that I really wish I didn't sell my set off in the early 2000's even if none of the cards had value.  Under the card is a couple stickers.  They were inside a green baseball binder my dad had.  It was a binder I loved because it really made me think of my dad collecting and seeing it made me happy.  A few years ago when finding it again I noticed it was in terrible shape.  So I spent a few years searching for one online, and finally a couple years ago I found a brand new one which I bought.  I've yet to use the binder, but its still in the box and I hope to take pictures of it (if I didn't already mention it in years past), and possibly fill it up with cards originally from my dad's collection.  I finally had to trash his binder this year but I kept these stickers because one day I'll find these exact ones and put it in my new one just to remember him.

The wrestling cards are a reminder that I actually bought a blaster box this year.  It was discounted, but I still got to open packs.  I planned to do a blog on it, but never did.  I however scanned these for the TCDB, which I don't think I ever uploaded, so there's that.  I don't know how my collection will change in the coming years, but I don't plan to give up collecting wrestling cards even if I may not have a desire to collect too many of the current products.

So far this post has been pretty long, so I think I'll just post a bunch of pictures next with little words. 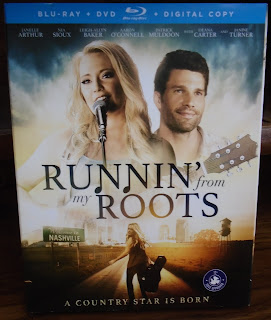 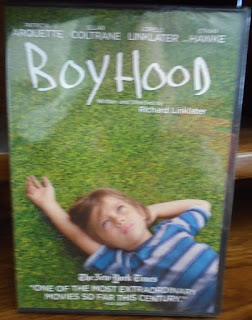 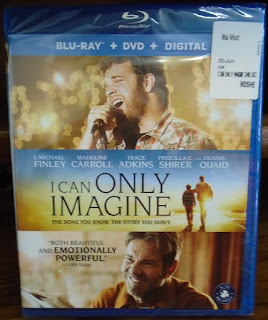 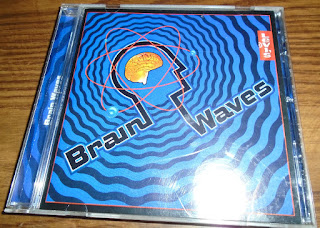 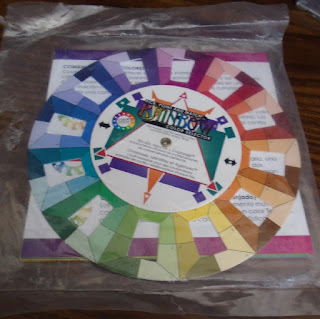 Movies were from the Dollar Tree, one of my main time wasters of 2020 was movies.  The CD was from Savvy Seconds, one of a handful I got throughout the year.  I also got the color wheel there too, but it was free. 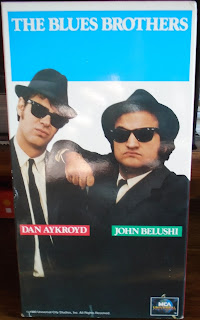 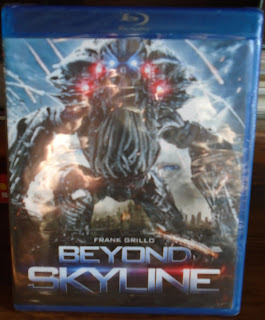 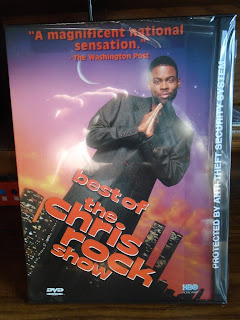 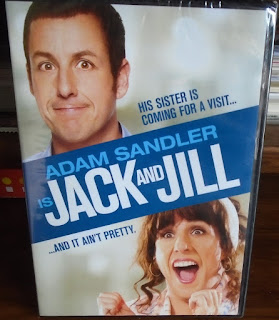 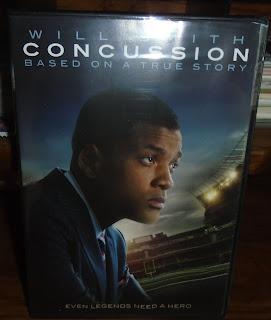 More Dollar Tree movies, except the VHS tape of The Blues Brothers.  I've been building a small collection of VHS tapes I remember from childhood as long as the tape box looks good.  I'm also converting stuff I recorded off TV and family videos to DVD.  It's another project I did in 2020 that took away from card collecting.

At this point I think I'll stop this post and do another one later.  I didn't realize I had this much to clean up.  I guess its not the finale.  However I have one more picture to show real quick. 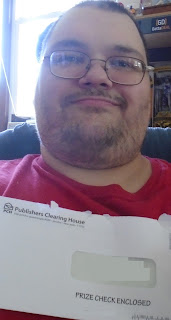 So a weird thing happened in 2020.  My mom is under the impression that I'm lucky and in early 2020 she signed me up for Publisher's Clearing House.  I admit I have a string of luck at times, but I haven't had that kind of luck in years.  Anyways she was unaware that that once I entered my email, I would be BOMBARDED with emails from them daily.  At first I entered daily just to make her happy, then later just did it out of boredom.  Anyways in late August I was playing (side note at the time it took around 3 hours to basically do your limit of games on there), and I had the daily high score.  A few hours later I went to check and I fell to like 3rd place.  I then realized I forgot to play a few games and made my way back to #1.  I checked a couple hours before the end of the day and was still leading.  If you are the leader at the end of the day you win a money depending on what level you are.  I checked just after 11 PM Eastern and it reset, but I quickly got an email saying I was the leader.  I don't like to discuss money online, but it was a nice amount.  We'll say in the $200-$500 range.  I didn't expect to win it, and when the check came it finally hit me that I won.  It came at a good time too because we were in need of a few things, so I didn't get to blow it on much, but it was still a good win.  Since then I have kind of stopped playing because I'm tired of checking in daily and I have other stuff I've worked on, but it was fun while it lasted.  I had won a couple other instant prizes of 10-20 bucks a time or two, so I guess if you have a few hours a day to waste, its worth a shot.

So I guess that's it for now.  As mentioned earlier, I have no plans of ending the blog.  I've noticed a few bloggers have mentioned changing directions of their blogs and expanding it some, and I feel I've done that in the last few years.  I've shifted to showing more knick knacks and movies, and less on cards.  That aspect likely won't change, but if I do start writing more, my goal is to show off more of my collection again.  In fact once I get everything sorted and hopefully downsize some cards I don't want, it might be fun to show them off again.  No timetable on when that will be, but until then, I'll post whenever I'm in the mood.  Thanks for reading this and I hope everyone has a great weekend and a Happy New Year.