Adding New Cards To My Collection!

To say 2020 has been crazy would be an understatement.  I could say anything like "I've been busy" or "Where does the time go", or anything else, but the truth is- I just haven't felt like writing.  I may or may not have stated on here before that I used to write poems a lot.  None were that great but I improved each time and they were getting better.  In 2006 my father passed away and around the same time I started to develop writer's block.  I just couldn't write anymore, and I believe it was around this time in 2006 that I wrote my last poem.  After my dad passed I gained possession of his card collection, a collection that sit dormant since the MLB strike of 1994.  I myself sold my collection in around 2003 or so and was out of the game.  Even after gaining my dad's collection, I didn't have a real desire to collect again, though I did have fun sorting the cards he did have.  He was a set collector, and for the most part his collection was pretty complete among the sets he collected.  Fast forward to 2011 and I lost my job due to a back injury and while I recovered I bought a pack of cards here and there.  I wasn't full into the card game again, but it gave me something to do to pass the time.  It was around that time that one of my sisters (who would have turned 43 today) was diagnosed with stage 4 cervical cancer.  All of that going on really needed me to get a hobby to take my mind off things.  When she passed away, I really needed something to do.  What started as finding a way to catalog all my cards to find their value or even unload them off turned me into wanting to collect again.  A year or so later I began to try out this thing called "blogging" for a second time (the first time was through a site called Xanga around the mid 2000's, and I wrote a few movie reviews besides using it as a journal).  For a couple years, I wrote a lot, then I set a goal of writing more than the previous year, and I believe because of that, I got burnt out of blogging.  To best experience blogging I think you should write when you feel like it, not to meet a quota.

This year I could have written more, maybe some of it was writer's block, but to be honest, I just didn't feel like it.  No sports for a while, then when it came back, I still had no desire to watch.  Since March I think I've watched 5 NFL games, maybe 3 MLB games, and a handful of NASCAR games.  My TV viewing has been mostly on free streaming apps like Pluto and watching wrestling and movies.  Anyways, during this time I've also spent very little time on my card collection.  My desire just isn't there much.  I've gotten a few cards and in the last month or so have gotten back into it a little more.  So I figured today I would post some cards I've gotten in 2020.  I have enough for two posts, but I'm not going to say when part two will be wrote, lets just enjoy this for now! 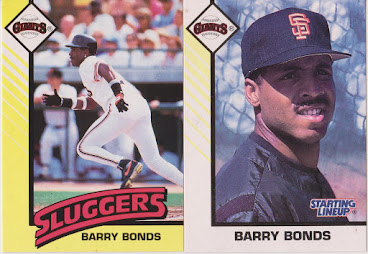 Let's begin with some cards I've had for a couple years.  These were inside an unopened Starting Lineup I got of Barry Bonds at my local second hand store Savvy Seconds, but the plastic was starting to yellow so I decided to free the figure and take the cards and add them to my Bonds collection.  I have no regrets and the figure looks nice near the Johnny Damon one I have as well. 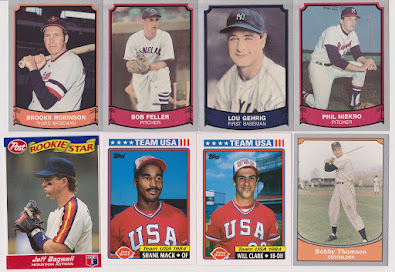 On a trip to Savvy a couple months ago I snagged these cards.  Not a bad day when you can get a Gehrig, Feller, or Niekro.  I'm also a sucker for Post cards, so while Bagwell isn't a PC player per se, I can still be happy to get it.  Same with the Dairy Queen cards.  I would like to work on that set a bit more and I imagine it shouldn't be too hard to find more.  The Bobby Thomson card is similar to the top row but from another set.  A set I have a feeling I'll get more cards from soon. 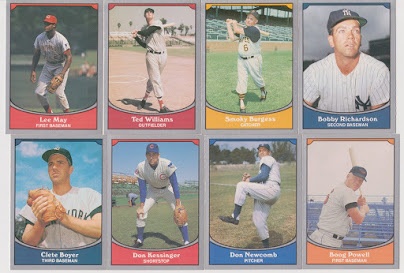 WOW that was quick!  In fact on the same trip I picked these up.  I know these I guess are um... vintage modern vintage (I mean made to look vintage but are modern, but now old enough to be classified as vintage) but I'm still happy getting a Ted Williams, no matter the age.  This was a pretty good day of picking cards. 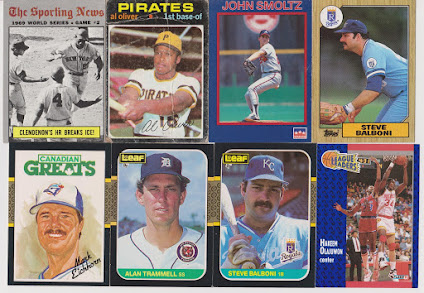 This was on another trip a few weeks later.  An odd mix of cards, but ones I wanted nonetheless.  A pair of Balboni Royals, a Long John Silvers card, and a Hakeem Olajuwon card are a pretty nice addition to the collection.  The two top left cards are well loved, but that was what made me like them and they will be nice additions to the collection.  The Alan Trammell card is a PC as well so I can expand that collection a bit too.  The Mark Einhorn card doesn't really fit into any collection, but I've never seen a Canadian Greats card before and for a dime I couldn't pass it up.  Overall I was happy with these pick ups. 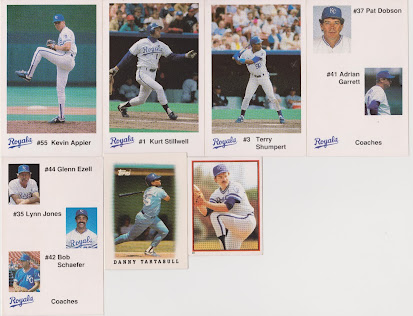 Most exciting on the trip was pulling these Royals cards.  I never expect to find a team set complete or not so getting a few of the Police cards were really exciting.  I'm not sure when I'll be able to finish that set but for now just finding them was good enough.  The same goes for the Quisenberry sticker.  I have no idea when or how I can finish that team set, but it will be fun to try.  I think the main difference between the way I collect and the way my dad collected was I am more of a team collector and he was a set collector.  It's not that I don't want complete sets, I just don't know if I have the room for them and figure it might be easier and cheaper just to get the Royals cards and if I want build from there.

The Danny Tartabull I was worried I already had since I have a few from that set, but I didn't.  The other great part about scanning these cards recently was I also was able to put them into my collection and update my have and want lists.  I've been able to complete a few team sets as of late and expand my want lists as well.  A set doesn't go into my want list until I have at least one Royals card. That way I don't clog pages with sets I don't have any cards of and also I can crosscheck sets I either have finished or none at all and maybe can get a full team set.  It's been working good so far, but in the future I hope to find a way to keep a checklist on me when I go places.  I don't have a cell phone, so its tougher to check.  Though I did find my sister's old Nook which I might see if I can put checklists on there and carry that with me.  We'll see.

Before I wrap things up, I thought I'd share one more card.  I admit I don't read as many blogs as of late, but I sometimes find some and read.  One I recently read was giving away cards, and I asked for one, and it arrived a few days ago. 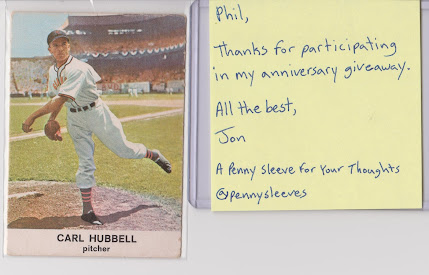 If you've never read Jon's blog, A Penny Sleeve For Your Thoughts, you are really missing out.  Besides being a great blogger, Jon is a nice and generous guy too.  When he posted this card at first I felt guilty since I don't blog as much and other people may want it.  Though I noticed it had been a few days and I felt if someone really wanted it by then, they would have claimed it.  One of my pet projects is collecting cards (not everyone, but at least one) of people from Missouri.  They can either be born in Missouri, grew up in Missouri, lived in Missouri at one point or went to college in Missouri. College ones are really a different collection, but just giving you an idea.  I also want to collect at least one card from every team who ever played in Missouri.  Anyways, Carl Hubbell was born in Carthage, Missouri in 1903.  While I can't say I've been to a ton of Missouri towns (though I have a list somewhere where I list every town I've been to), I can say I've been to Carthage.  I went in 2002 and stayed the night there as I made my way to a Music Festival just outside of Joplin.  Carthage isn't too far from Joplin, and is headquarters to Precious Moments the little Christmas ornaments.  I didn't do much in Carthage but at least I can say I was there. While I haven't catalogged my Missouri collection much outside of Mizzou I believe this is the first or second Carl Hubbell card I have and am really glad I have it.  Thank you so much Jon for the card.

So that will wrap it up for today.  I hope you enjoyed reading it and I hope to have another soon, but I won't say I will.  As for blogging, its tough to get back into after being away for a bit, but I've noticed changes on Blogger, and I'm not sure how I like them yet.  Maybe writing more will get me more comfortable in writing and the site.  Anyways, thanks for reading and have a great day!