Dollar Tree? Can It Be?

Thought I should write a post to show I'm still kicking.  I didn't realize its been over a month since my last post, but I haven't wanted to write anyways.  Today however this post will have cards featured.  Also movies, but the focus will be on cards. 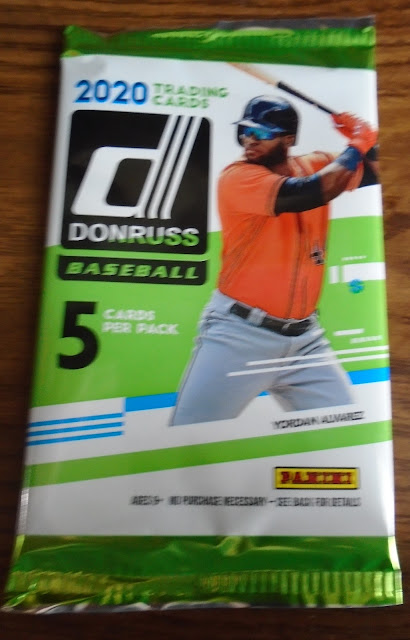 On a June trip to Dollar Tree, I was beyond shocked to find a pack of baseball cards.  My local Dollar Tree hasn't had any sports cards in maybe 4 or so years, but I still look.  This is the first current year pack of cards I've bought since I think 2017, so it was exciting to open them up. 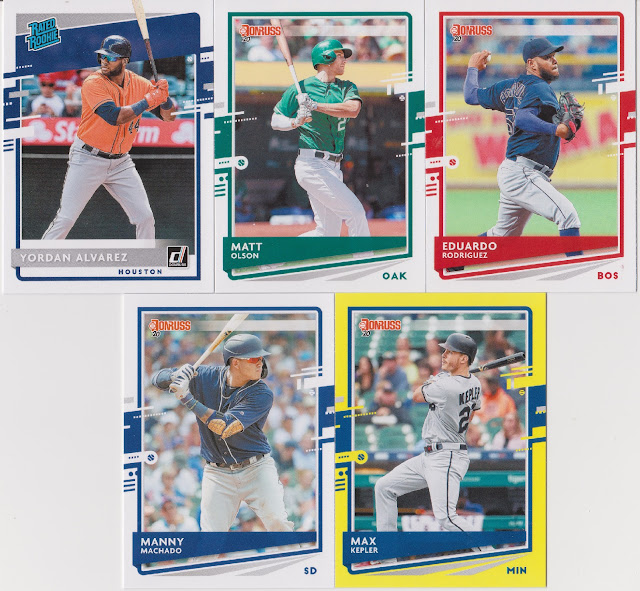 I like the look of the cards, but I don't get why they don't spell out the city name on the cards.  It's the least they could do since they can't name the team.  None of these scream keeper to me, and good thing.  A few days ago I went to move something on my desk and it hit the cards and bent one of the corners to bits on all the cards.  Luckily the other cards on my desk were safe, but still was upset by it.  Especially the Kepler since the was the only real keeper I considered.

Since I'm showing cards, I'll show some others I got recently.  A couple packs from my sister which was a few months ago.  I'm sure I haven't posted them, if so, sorry. 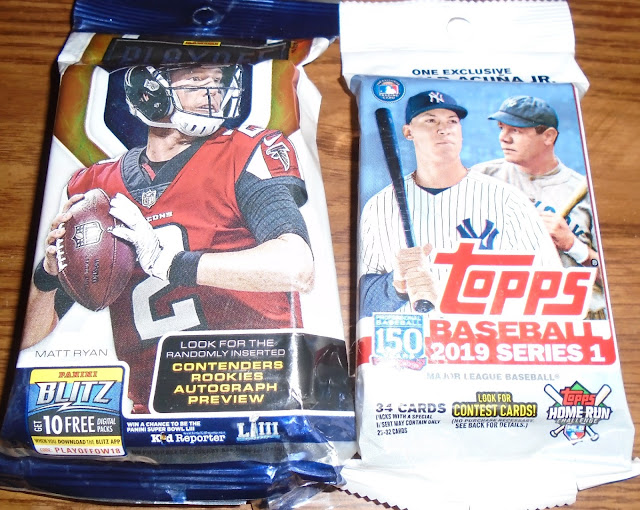 My first pack of either, so again it was fun to rip these open. 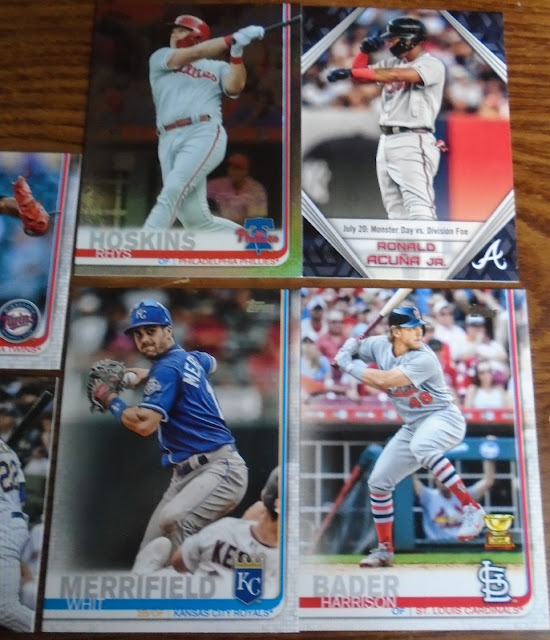 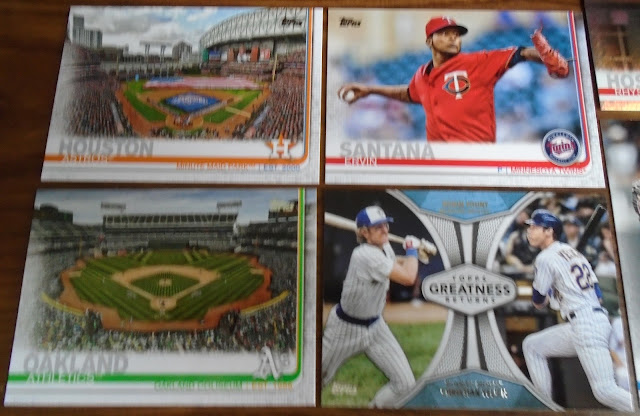 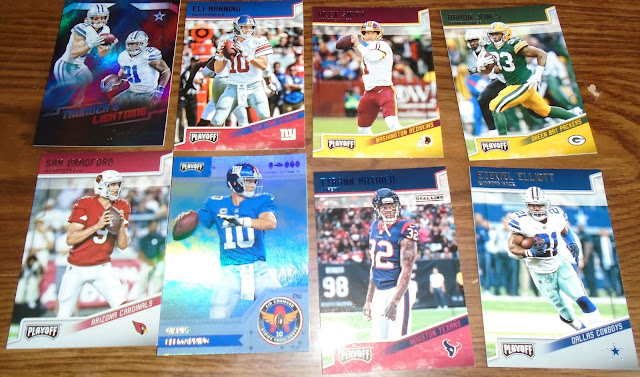 I was pretty happy with the baseball cards.  I got a Royal card, so anything else is icing.  However I've been working unofficially on a Frankenstein set of Stadium cards, so getting the Oakland and Houston cards were good.  Plus who would be disappointed to pull an Acuna or Yount card.

As far as the football cards, I don't really collect too many anymore, but this was also a good pack.  In fact most of these cards I do plan on keeping.  I'm not sure why but I collect a few Sam Bradford cards, as well as Eli Manning.  My favorite is the Alex Smith card though.  Most Chiefs fans may have been tough on him, but I always liked him.  I understood why they traded him and it worked out for Kansas City, but I wish it would have worked out better for Alex.  I still haven't watched him get injured yet.  I've seen what his leg looked like on the ESPN documentary though, and that was enough to cringe, so I don't need to see the play.

Since I had more cards on my desk, might as well show them too. 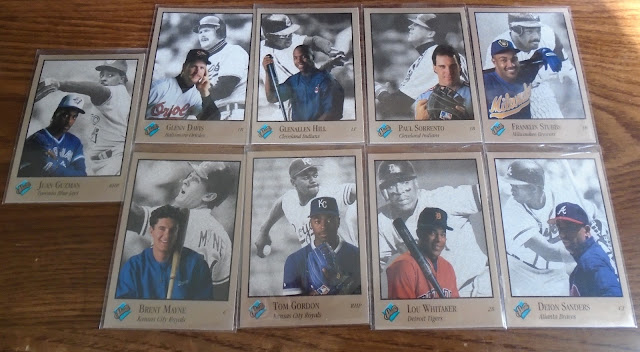 I feel bad for not remembering how I got these, but these are all keepers.  I liked the Studio sets, and maybe one day I will build them.  But not until I clear out a lot ones I don't want first.

I apologize for not writing much on these, I'm just not sure what else to say.  Also upset at blogger right now for being slow and moving my pictures I just uploaded, so I am speeding this up a bit.

So that's it for the cards, but while on that trip to Dollar Tree, I found some movies.  Anymore my trips to Dollar Tree are in hopes of finding movies, and this trip didn't disappoint.  So let's see what I picked up. 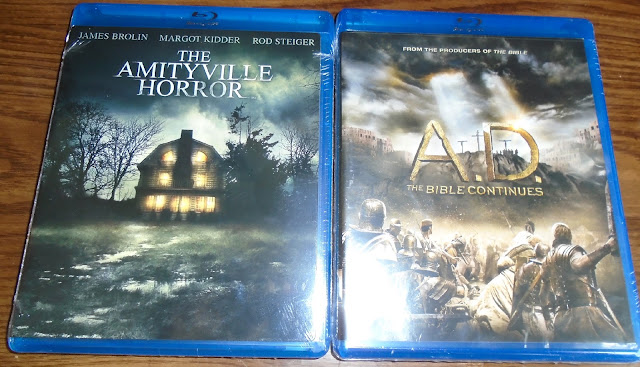 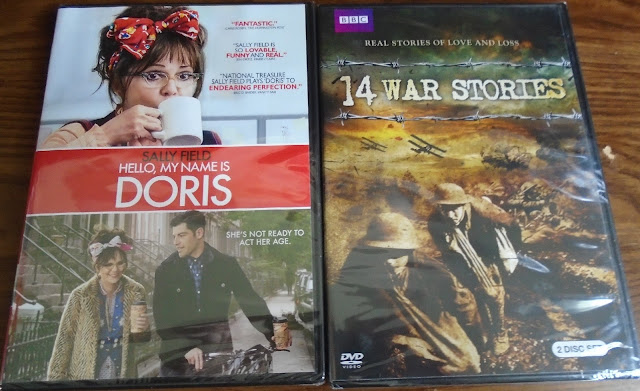 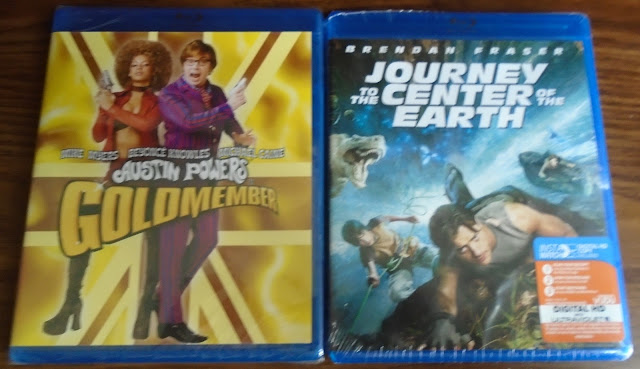 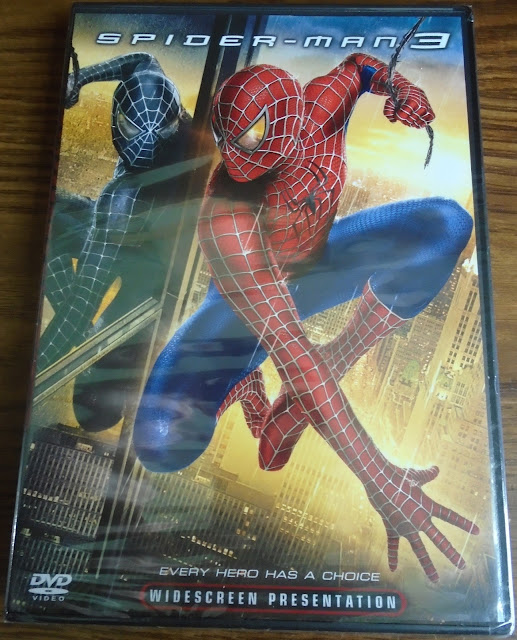 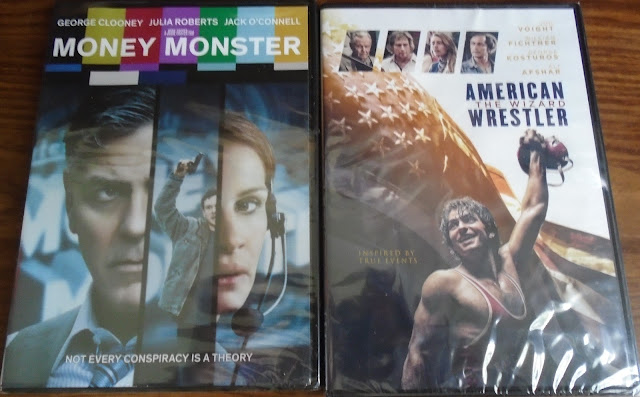 The top two pictures are movies I got for my mom.  She was excited to find The Amityville Horror, and I was excited that it was on Blu-Ray.  The others were movies she hasn't seen before, but for a buck its hard to pass them up.  I figure if you watch it once, its like renting it.  If it's good you can keep it, if not you either hang on to it or give it away.  Maybe put 50 cents on it at a garage sale and hope for the best.

To me, Goldmember was the worst of the 3 Austin Powers movies, but I was happy to upgrade it from the DVD I have, now only if I can get the second one either on DVD or Blu-Ray.  The Journey To The Center Of The Earth I got because of the hopes the digital code worked, which it did.  I haven't seen it, but I have Journey 2 for some reason, and never seen it either, so this way I could watch both.  Plus Brenden Fraser is good in some movies (probably can't beat Blast From The Past though).

Spider-Man 3 I was happy to get because I have the first two so this will finish it up.  Though I've never even watched the second one, so I guess I have a night to watch stuff.

I never heard of of American Wrestler, but it was a blind buy, and I figure I'll watch it soon.  The one that made me happiest to find was Money Monster.  I know its not the most exciting movie, but I really liked it and have wanted to get it for some time.  I figure I could watch it by the end of the month if I get bored and nothing else to do.  If not I might do a movie challenge next month and it will be on my list.

Before I go I wanted to show a couple screenshots.  Last month I got bored at like 4 AM and I googled myself.  Well, my screen names.  I've known a few websites and social media that has retweeted me or showed a tweet of mine, but I stumbled upon one I had no idea I was mentioned.  Here is a couple websites that have shown my tweets on their site. 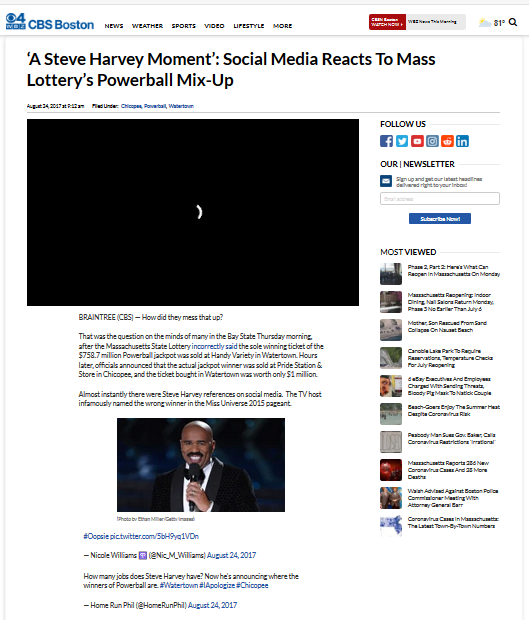 The first one is from ESPN, and I've known about that one for quite a while.  It my be one of my favorite tweets.  For context, the Royals started off bad one year, and I made a joke about selling off the team.

The second screenshot I had no clue I was mentioned.  To be honest I don't even remember the tweet and vaguely remember the incident.  The lottery announced a winner of a jackpot and then a few hours later announced it was the wrong location.  I guess I tweeted that, making a joke about Steve Harvey, which was the cool thing to do at the time.

So anyways, I guess I'll wrap it up for now, thanks everyone for continuing to read my blogs, even though I don't post as much anymore.  I hope everyone has a great rest of the summer, all things considering.
1 comment: