All Over The Place

Summer is here, and just last night I found a folder from 2 years ago that has probably a week's worth of posts in them.  So there's that, however that won't be what I mention today.  This is a bit of a random post but it does include cards, and a few other things.  All of which I've acquired in the last few months. 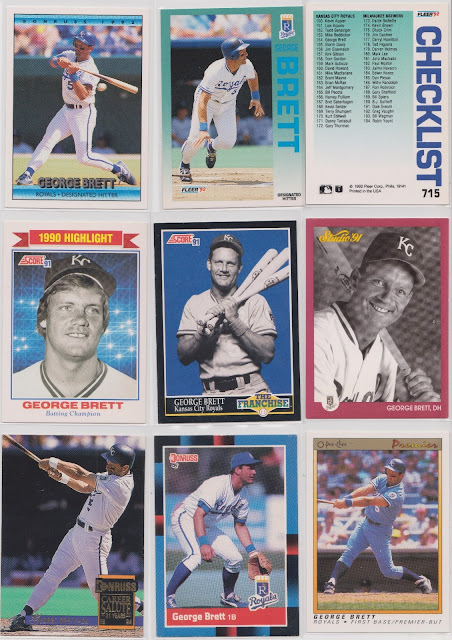 While not being too active on here, I still visit the Trading Card Database daily.  One of the forum postings has a fellow member having a contest.  Basically whenever the Phillies win a series the first five to respond to that post get 20 cards off his for trade/sale list.  I'm usually late to join in but a few weeks ago I was lucky enough to get in.  He has a ton of cards on his list so I could have easily found 20 cards, but in this instance I was looking to fill in a few holes on my Royals wantlist.  I had a few mishaps with the database trade function, but it eventually worked itself out.  I wrote him apologizing for asking for so many George Brett cards, but they pretty much all were the last card I need to complete the team sets.  The checklist card though I might have been even happier to get because its not really a card I'd want to pay for, so it was nice to get.  Those 1991 Score cards I bet I have, but I tend to mess up a lot adding cards to my wantlist, but after getting them, they weren't in my box of Royals cards, so I guess I've only seen them online or remember having them the first time I was collecting. 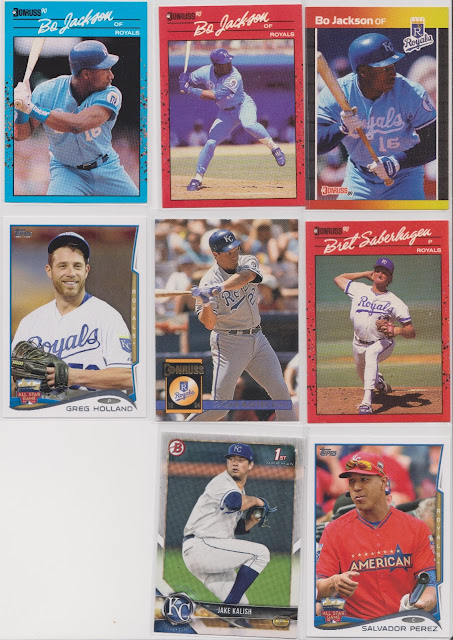 Like I said, I was filling want list holes, so I got some Bo Jackson I didn't have and even a few newer ones.  The newer ones I don't think I'm close to finishing but I did want a few newer cards.  Glad I got the Jake Kalish card since I've been hearing good things about him, but to be honest, I haven't kept up too much on minor league happening like I have in years past.  I haven't even listened to a minor league game on TuneIn since the first week.  Maybe I'll get back to that soon.

So I had a couple more cards to pick, and there were plenty of Royals cards to pick.  However, I decided to see what else he had to see if there might be a hard to find card I've wanted, or maybe just something I've never seen before.  I was quite happy to find these last two.

Well, I forgot about the McRae, which may or may not finish that set.  However the two racing ones I was happy to find.  One day growing up I went with my dad and grandma to a nearby town to do some shopping which wasn't too unusual.  However at the local Western Auto store they had two race cars on display.  One was the Darrell Waltrip 17 NASCAR which is similar to the one on this card.  The other was the NHRA car driven by Al Hofmann.  I've looked for cards featuring Waltrip's car before but never got too far into it.  I never even looked for cards of Hofmann knowing not many NHRA sets were made, but knew of a few.  Ideally I'd like to have a card with his car on it, but this works for now. 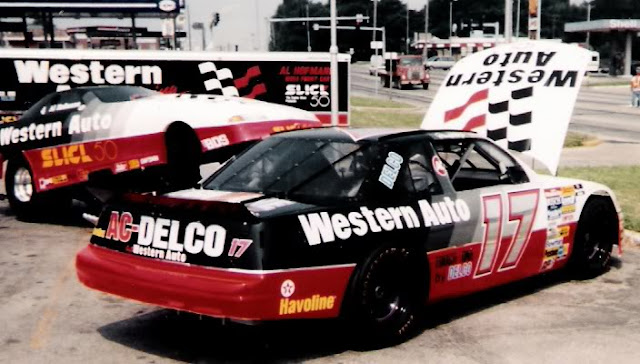 I might have another photo of both cars as well, but this was first one I found.  I was a huge NASCAR fan so seeing DW's car was awesome.  I was never into NHRA but did watch it at times, and this was the only time I saw any type of car from their series, so it was pretty cool.  Other NASCAR cars I've seen on display include Bobby Labonte's Interstate Batteries car and Sam Hornish's AAA car.  I have pictures of both which I'll post at another time.

So overall I was quite happy with not only winning, but the cards I got.  I hope it goes smoother next time if I win again, but might just let others win a few first. 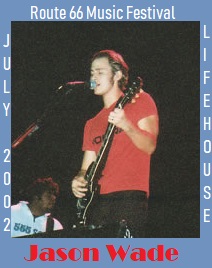 The Bobby Labonte car I saw was actually during a festival in Joplin, MO called the Route 66 Music Festival.  One of the bands there was Lifehouse, however I didn't get to see them.  Maybe one day I'll write about that fun road trip with a good friend and my cousin.  A lot of great music and times.  A while back I was using the Wayback Archive to look up the Music Festival (it was the last one they held) and came across this photo of Jason Wade the lead singer of Lifehouse taken from the festival.  It was my first custom attempt in a long time and it shows, but it was still fun to mess around with.  Now I'm a bit anxious to write about it, hmm, maybe I could whip something up soon.

Anyways, that isn't the only custom card I've made recently and this next one is much better I think. 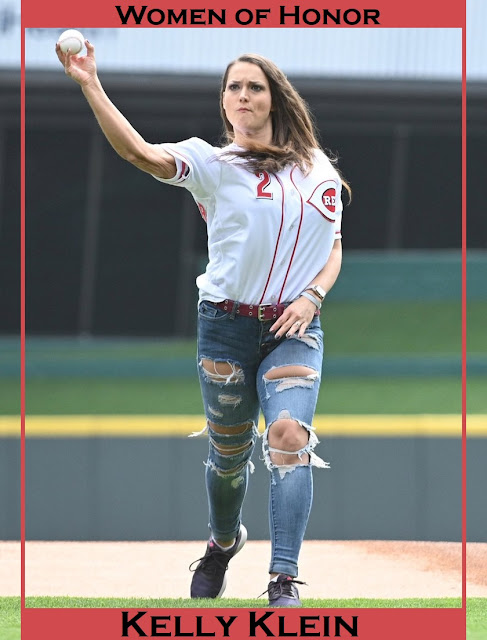 It's not perfect, but again, I haven't made custom cards in over a year.  These days while I still keep up on pro wrestling, I don't watch as much.  However one of my favorite female wrestlers these days is Kelly Klein.  She wrestles for Ring of Honor and was their woman's champion.  She might still be but I haven't watched in a while.  This isn't the first time she's thrown out the first pitch of a game, and I almost made a card last time.  This one I whipped up pretty quick and really like it.  If I ever did TTM autographs, I would consider printing this card to get signed.

Okay, so you may noticed my last blog was about stuff I found on a thrifting trip, and while I plan to do more, this was a standalone item I bought from my local second hand store and wanted to share. 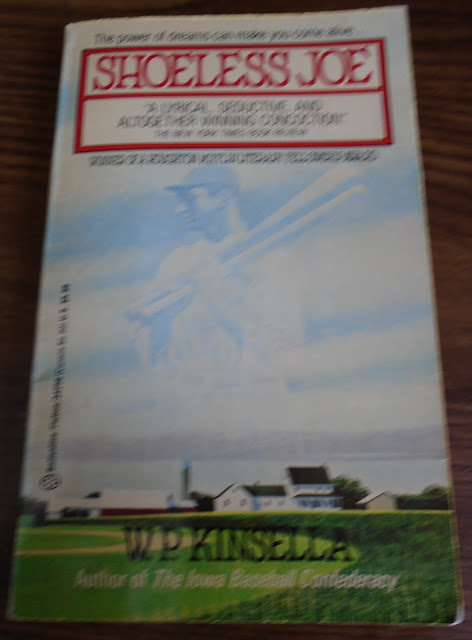 For some odd reason I buy quite a few books.  I mean 10 for a quarter its hard to resist.  However, I usually don't read them.  I'm not sure why but I want to change that a bit.  When I saw this book (in the kids book section) I was quite excited.  I love the movie Field of Dreams and this is a book I've looked for as long as I can remember.  I've found another of W.P. Kinsella's books and started to read it, but honestly, I'm not a fan of his style of writing.  He has a very roundabout way of writing.  Which is funny since most of my blogs are like that, but I like reading more to the point stuff.

So I can gladly say I finished the book.  It took a while but I can say I read the book.  My thoughts on it?  Welp, without spoiling too much, I prefer the movie a lot more than the book.  Events in the book never happened in the movie, and a lot of stuff was different that didn't really need to be in it.  I think the movie was a little more tighter and wrapped everything up quite nicely.  Having said that, I won't ever read it again, but I'm glad I read it once.  I also don't want to discourage anyone from reading it because of what I thought.  Some may love it, it just wasn't for me.  It will stay in my collection though because I'm still very happy I found it.

So a couple more things to show off before I wrap things up.  Recently the big talk around blogs and twitter has been buying packs of cards off Walmart.com.  Mostly something like 50 packs of baseball cards for 20 or 30 bucks or whatever they are.  They sell out quick though.  One day I realized I had some gift cards saved up and figured I'd look.  No baseball cards.  So I looked at what else they had.  They had football, but I've been dumping a lot of them off to a friend, so that would have be pointless.  They had hockey, but I'm not a big fan of the sport.  Then I saw NASCAR and wrestling.  I was tempted.  I haven't bought either in a while and figured at worst I'd find at least a few cards I'd like.  I think it was like 30 packs for 15 bucks, or something similar.  So I added them to my cart and needed to get a couple other items for free shipping.  I bought them and once I finish cropping pictures and scanning more I'll blog about them.  It was fun to open and I might do it again.  Anyways since I needed a filler item, I bought a movie and then decided to get something that helps me survive every summer. 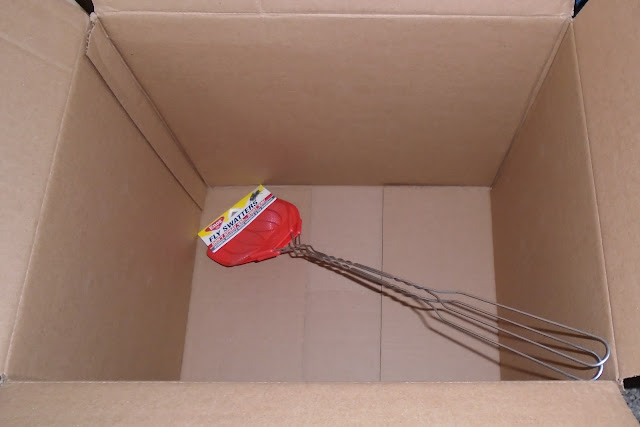 A two pack of fly swatter for a buck.  My sister laughed when I told her I bought them, but I'm glad I did.  These are metal handled ones and anymore all I ever see are the cheap plastic ones which break after one hit (sorry but I want them flies dead!).  I ended up getting 3 different shipments for all the items, the movies came second in a little package.  All the cards last in a medium sized box, and the fly swatter first, in this massive sized box.  I mean its a regular sized box, but it was funny all it had was 2 flyswatters in it.  We joked that the packaging cost more than the flyswatters and then mentioned if we ever needed more boxes, this might be the way to go.  Currently the box is used to store all the VHS tapes I have that I need to try to convert to DVD.

Speaking of the cards however, I got more packs than I was supposed to.  I got the right amount of wrestling, but I got like 4 extra packs of racing.  I'm not mad at it, just a bit confused.  However I also got two other packs of cards I guess they thought would go with racing, but I think its more non-sport to me. 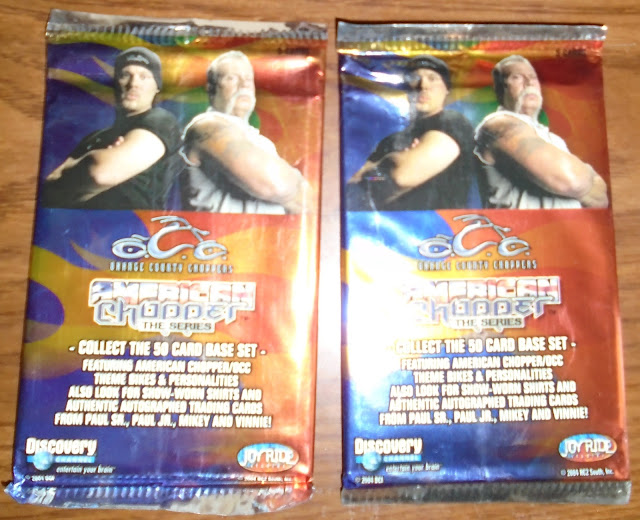 I never had a desire for American Chopper cards, but when I saw these I hoped to get a card of Mikey.  Since they don't fit in either racing or wrestling I figured I'd show them off now. 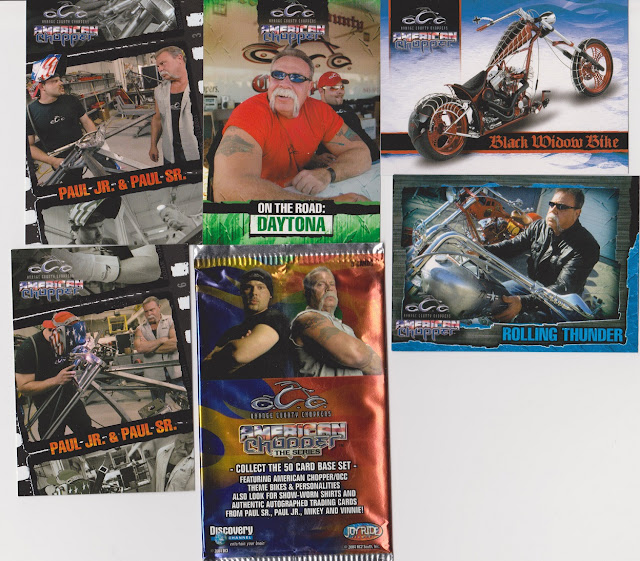 To be honest, I'm not a big motorcycle guy and didn't watch the show much.  My dad did but I think he just liked Mikey and thought it was funny when Paul Sr. yelled at Jr. which was every 2 seconds.

Aside from the lone bike card in this pack, these don't do much for me.  I'm not against the set, I might even try to build it one day, but I just thought for a 50 card set there would be a bit more variety and more bikes shown. This pack is so much better.  I like these cards.  This was why I thought about building the set.  I even like this Rolling Thunder card with Sr. on it.  It looks like I struck out on a card of Mikey, but I got a card of his bike, so that's something.

I saw the show came back but I've only see a few minutes of it.  I still have no desire of watching.

Anyways, that will wrap it up for today, maybe next time I'll delve into those wrestling or racing packs.  Thanks for reading and have a great day.
No comments: