I know my posts have been few and far between, and I didn't plan to post so sporadically but oh well.  Recently I took a trip to my local Walmart and checked out the cards.  I haven't mentioned it on here, but I don't like the 2017 Topps design and have no interest in getting them aside from the Royals.  So I was hoping to find something that caught my eye. 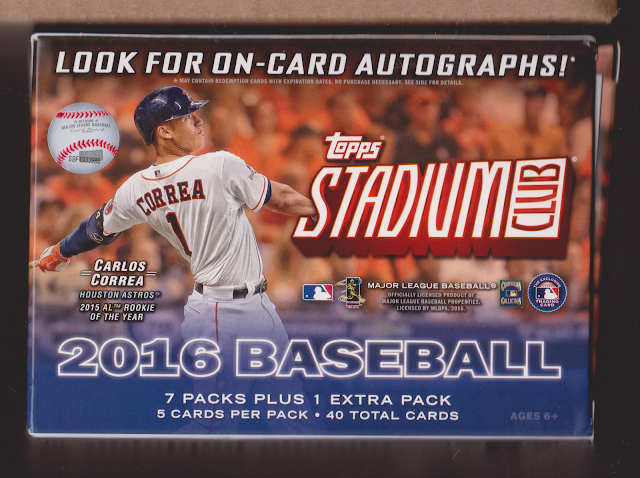 I found some 2016 boxes marked down.  I decided to get a box of the Stadium Club for 12 bucks.  Normally I would pass with so few cards, but since they weren't full price, I thought it was a better deal, and since I didn't have any of the cards, a chance to pull some Royals. 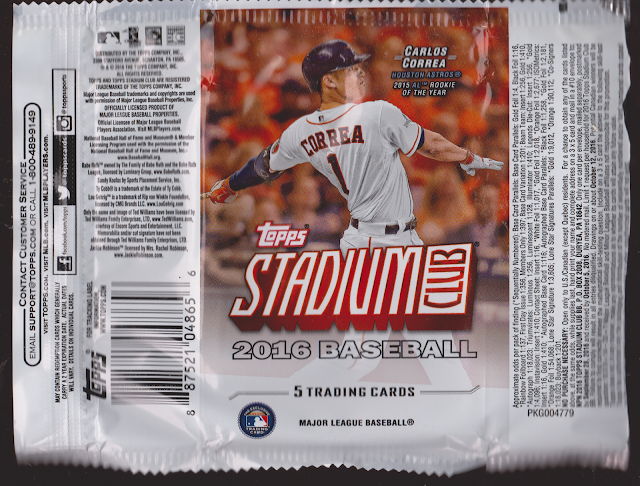 For some reason, none of the packaging was added to the Trading Card Database, so I scanned it all to add to the site once I get around to it.  But we didn't come for the packaging, we came for the cards, so let's dig in. 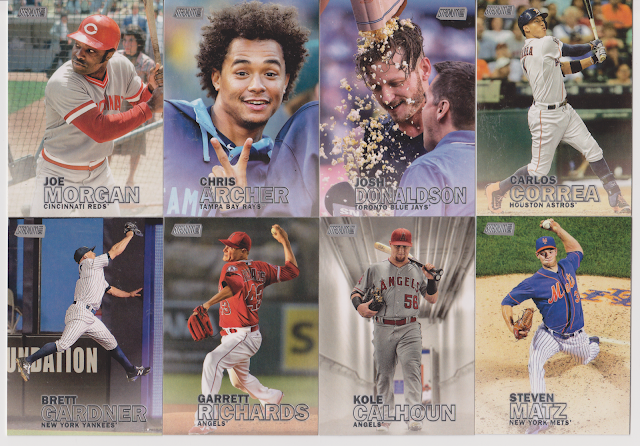 I will give credit to Topps for the picture selections and the design of the 2016 cards.  I think they were done beautifully.  It was also nice to pull some legends alongside current players.  My favorite in the batch are the Joe Morgan and the Chris Archer.  I have to decide if I'll build the set or just keep a few that I really like.  I doubt I'll build the set though. 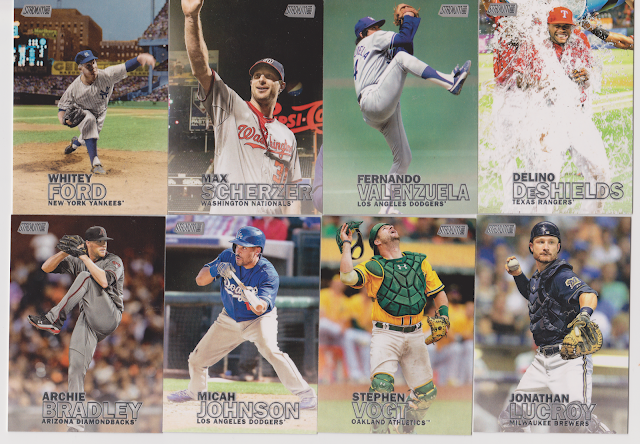 No singing the blues pulling the Whitey Ford.  I honestly love that entire top row of cards, specifically the Scherzer who fills a collection of mine, being Mizzou Made.

I don't have a huge passion for starting PC's for newer players, but if I did, Stephen Piscotty might be one.  I keep a closer eye on Cardinals than other teams (besides the Royals obviously) so I do root for some of the players.  Once I considered a PC for David Wright, and while I still kind of like him, its not a huge need anymore. 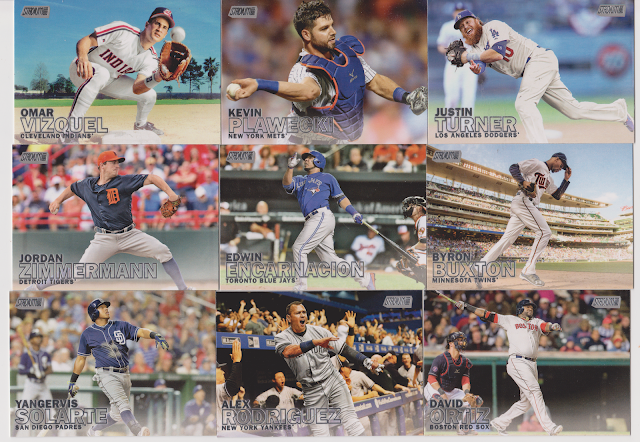 A-Rod and Big Papi?  Yes, please, mi amigo!  Alex fills a PC and Ortiz is the closest to being a PC without being fully committed to it.  In the past I've also considered a PC for Jordan Zimmermann, so this was a nice batch of cards.  My favorite though might be the Omar Vizquel, something about it just pops. 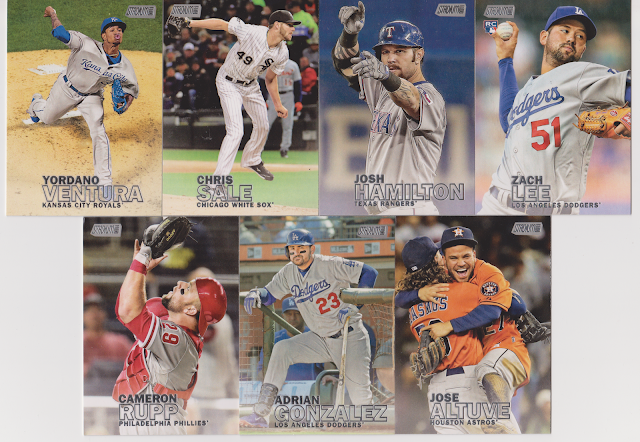 It was very bittersweet opening this pack and the first card I saw was Yordano Ventura.  Just weeks after he passed away, I knew I needed this card, but it also made me realize that I'll never get to see him pitch again. It made me wish I got to see more Royals games on TV.  Right now I have a free trial to Sling on Roku, and it would appear if I kept it, I would be able to watch Royals games again, but I'm not sure I'll keep it once the trial runs out.  It depends on how much I enjoy the programming and so far, I just can't get into it.  That might change though in the next month and a half I still have for free.

As for these other cards, I thought this was the best pack I opened.  It also contained Chris Sale, Josh Hamilton, and Jose Altuve, all borderline PC's.  I also chuckle each time I see or pull a Zach Lee card, thinking of a little rivalry I had with a friend.  I am a big Mizzou fan, and he was always a die hard Cornhuskers fan.  One year (well, usually every year) Nebraska would beat Mizzou in football, and this one time they had a QB with the similar name Zac Lee.  Usually we would taunt each other with different cheers, mine being M-I-Z!  and before I could finish, he'd go Z-A-C! L-E-E!  Those were fun times.

As for the special cards I pulled, nothing super impressive, but then again, I never really think of insert cards or parallels when I think of Stadium Club.  With that being said, I did pull a sweet David Wright, who again, is almost at a PC level, so it was nice to pull.  I also like the gold Yasmany Tomas card as well.  He doesn't fit into a PC, but in recent years I have kind of liked the D-backs a bit more.  I think besides the Mets, they may be my favorite National League team. Though I really don't like calling them the D-backs, so I still call them the Diamondbacks.

However, the best card I pulled was the Ian Kinsler.  Just looking at it, it may not seem to special, but when I noticed it was some sort of parallel when I first saw it.

When I turned it over, I noticed it was #'ed to 25.  I can't think of the last time I pulled a card with such a low number.  The last I can think of was about 4 years ago pulling #1/50 of a Topps Update card.  Not just one, but the #1.  I was pretty happy.  However this one to me is better, not just because the lower production number, but because Kinsler is also Mizzou Made and will fit perfectly into my collection.

All in all, I think it was a pretty good box.  I think the price point for me was very good, and if I saw another box for that price, I would have gotten them.  However if I had to pay full price, I wouldn't have been as happy.  I admit I'm cheap, but 40 cards for 20 bucks isn't worth it to me unless you know what the 40 cards are.  Over 50 and its a better deal, but for only 12 bucks, its a pretty good risk.

Since its been a while and I did some scanning, I thought I'd show a couple more cards I recently added to my collection. 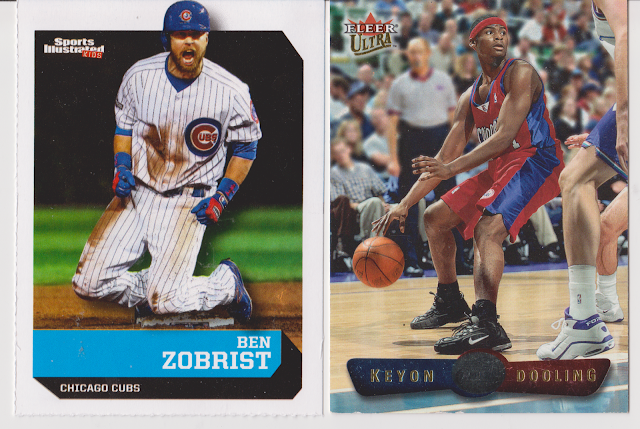 Like many Royals fans, I fell in love with Ben Zobrist once he became a Royals player.  So much so, that when we knew he wasn't going to resign, we were happy for him.  However depending on who he'd sign with, we might have kept on cheering for him.  When it was announced he signed with the Cubs, were were very excited.  In fact we were so happy that when he won the World Series with the Cubs last year, it felt like a win for all of us.  So when I got my most recent SI for Kids magazine and saw this card, I was ecstatic.  Its been a while since I truly loved a card they had in the magazine, so this was perfect.

The Keyon Dooling I got from Listia.  I don't spend much time on there anymore, partly because of having so few points and most auctions want a lot more points in the past, but also because I'm just a little burnt out from it.  I still browse but rarely find a card worth bidding on.  I found this one and decided to bid just because he was Mizzou Made.  I don't have a ton of his cards compared to Kareem Rush or Anthony Peeler so it was a safe bet I didn't have this one, and it turns out I didn't.

So with that, I guess I'll wrap it up.  Just today I went back to Walmart again, and I found another box of cards marked down.  This one wasn't Stadium Club, but it was 12 bucks and had 70 or more cards in it, so it was a great deal.  First pack I opened was almost worth the entire box, but I'll save that for a future post.  So I hope everyone has a great weekend, and thanks for reading.
No comments: