Savvy Loot: Hear Me Out, now with CARDS!

I've been working on a few things recently, but decided to go to my local second hand store, Savvy Seconds.  While I struck out on finding CD's this time, I do have quite a few to show in the future.  However, I did find some cards, and even some free stuff.  So its time for a Savvy Loot post.

Initially I looked at CD's and while last time I got a few of them, nothing interested me this time.  I walked around the store a time or two and still didn't see anything.  I found a couple boxes of cards that was there last time, but I didn't look.  Then right before giving up I spotted two more boxes of cards.  One was an 800 count box that I almost passed on but noticed some non-baseball so I looked.

I'm not focusing on much outside of baseball these days, but for 10 cents a card, I couldn't pass these up.  The Roenick I think is a rookie, so that was really nice.  I was always confused on the Akeem vs. Hakeem naming of Olajuwon cards and such and still am.  I always liked him and even have a Walmart knockoff style practice jersey of his I had in high school.  Its tattered and torn and my gut sticks out, but its nice to wear around the house.  I'd love to find another just like it one day.

The exciting find though was the King B card of Mecklenburg.  I wish I kept more of those beef jerky cards I had as a kid and would totally buy it again if they made them again with cards.  This one I got in hopes of it not being on the TCDB, and it wasn't. 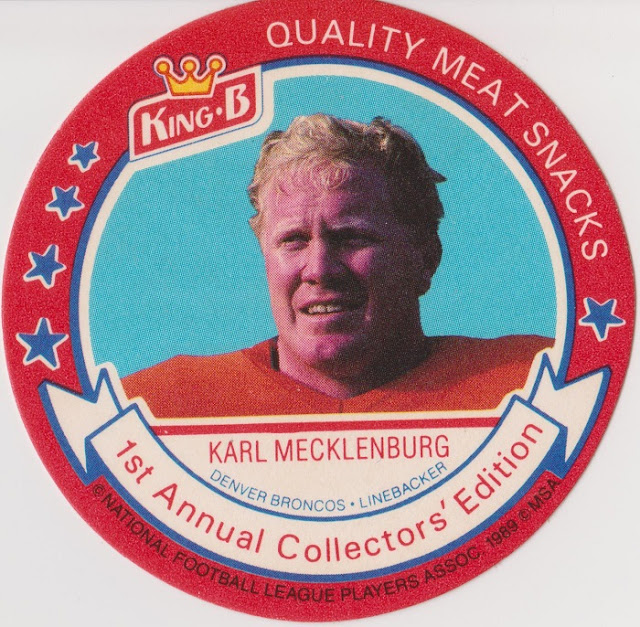 So this is the scan for there.  I kind of cut the top off, so I might have to rescan it, and the back too. 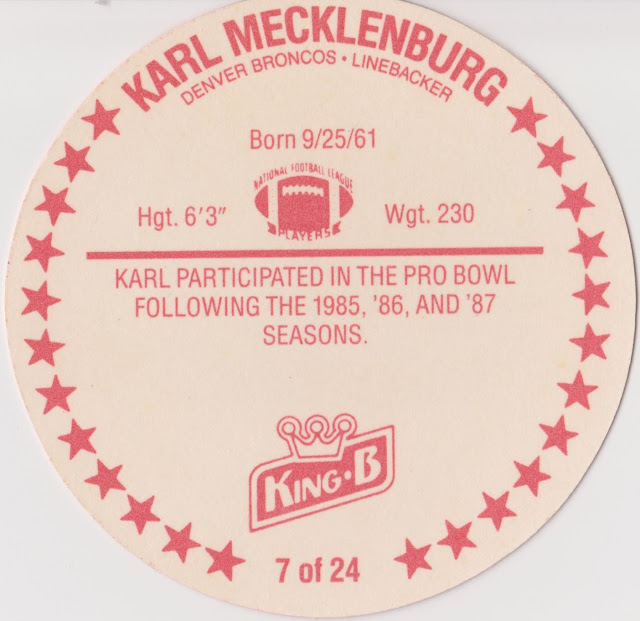 As fun as that was, it was ultimately baseball cards that made me happiest with this box. 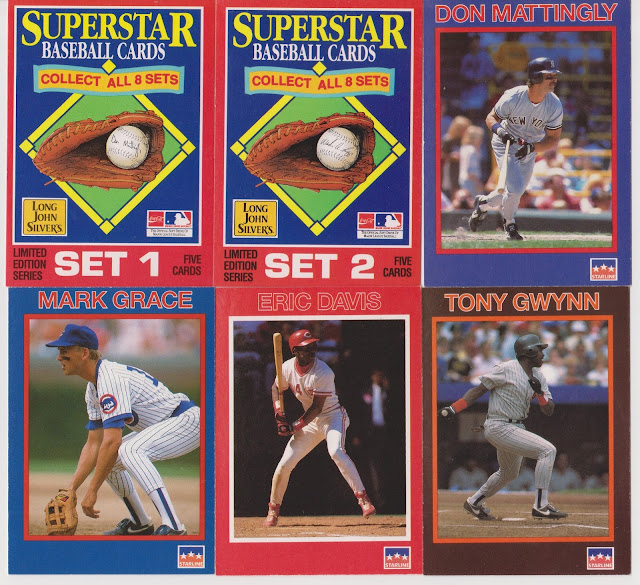 While its not at the top of my list, I've wanted to build this set for a long time, and was actually most excited for the header cards.  I probably have the Grace and Davis cards, but I know the Gwynn is new to me.  If they had doubles of these I'd have got them too. 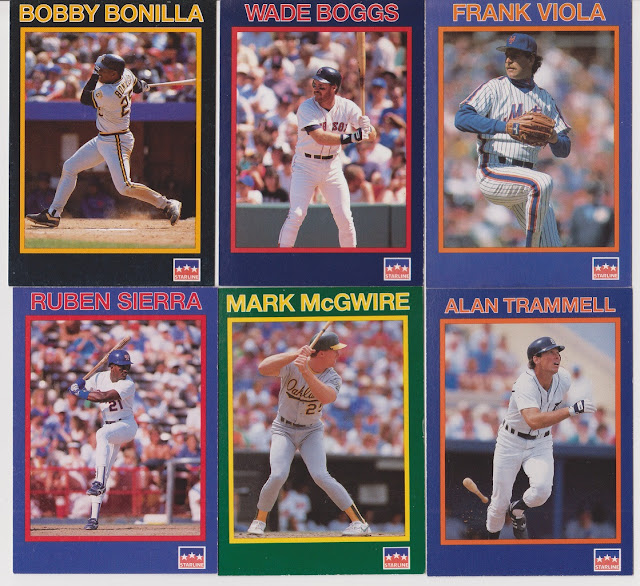 However, I was excited to get the first 10 cards, so now at most only need 30 more.  I know I have about 10-20 cards already, so I have a feeling I'm half done.  Maybe if I find some cheap on COMC during the Black Friday sale I might work on it. Even if I didn't build the set, I'd still have gotten the Gwynn, Mattingly, Trammell, and McGwire.  Oh, and the Boggs.

At the end of the box was more football, so here are some more from the box. 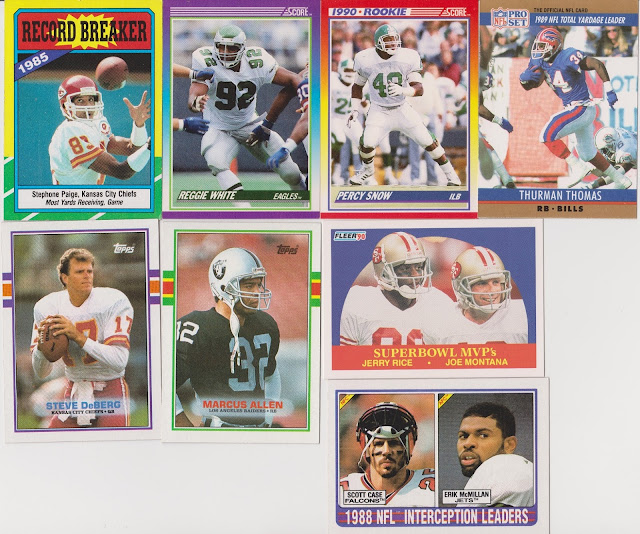 Football I've really cut out of my collection, but I still collect a few players, so these were some great ones to find.  I might have the Percy Snow already, but the rest were new.  I got the Erik McMillan on the bottom I got for my Mizzou collection.

The other box I felt a little bad picking cards from, but I figured if it was open, it means it had been picked through.  It was a 1992 Topps factory set.  My first thought was "wonder if the gold cards are still in there".  They were, but none I really wanted.  If I remembered the set better I would have looked for rookies and Hall of Famers.  I was ready to leave though so I only looked at one end of the box.  If there next time I know what to look for. 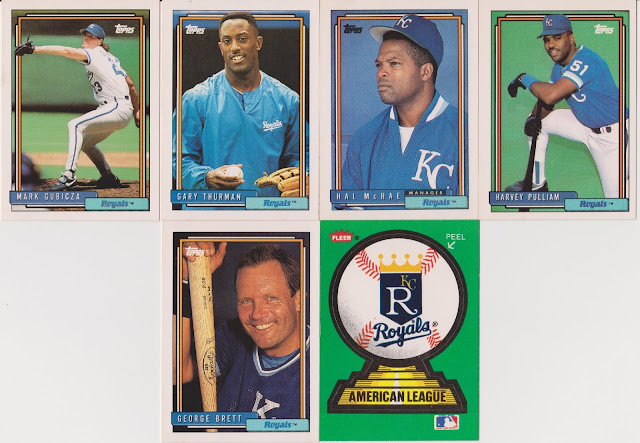 First the sticker was in the other box, but I figured I didn't have it and I was right.  As for the Royals, I think I needed the Brett and the McRae, so all is well.  I still need two more Royals from the set (one being a checklist) so I hope they are still there next time.  Also hope to get the Greg Maddux because somehow I don't have that one.  Overall I was happy paying 10 cents a piece on these.  I could have bought a box for 25 bucks, but this was much better.  Next time I might find a couple bucks more.  I am happy how many cards have been there this year.

So after getting my stuff and leaving I always look at the free basket out front.  Its a shopping cart with stuff they will probably toss, sometimes broken stuff, and sometimes stuff they just don't know what to do with.  When I get to previous finds, there is some good stuff to find.  This time it was mostly loose fabric pieces that weren't really fit to be sold (cut small pieces and such).  Anyways I saw something on the top and took a look. 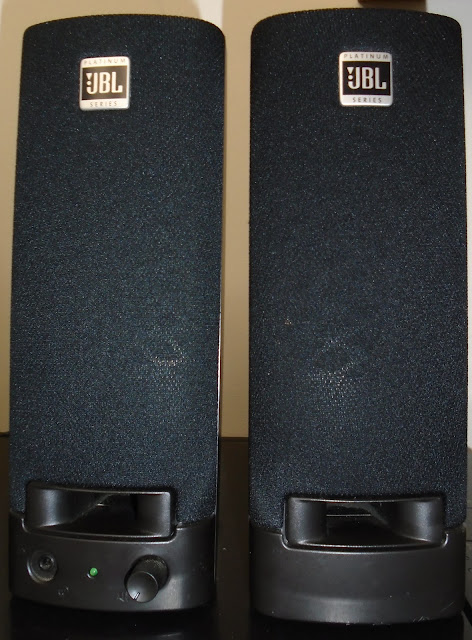 JBL computer speakers.  Now to be honest, I don't really need speakers, but they were free.  At worst they don't work and I can throw them in the dumpster.  If they work I can decide if they are better than the ones I have and use them.

Turns out, they work great and just needed cleaning.  Also a power source.  I had a power source, so now I think I'll use them when I use my desktop next time.  I was pretty happy.

However, I wasn't done.  I saw a black box inside the cart, and was curious, so I dug around the fabric and found three more speakers. Wow!  These could work as surround sound speakers if I knew how to set it up.  I can't find much on them, but they don't need a power source, but do need speaker wire to connect to a stereo.  I have a stereo in storage, and hope to go get it this week.  When I got them I thought again, at worst, I could take them apart and use the square box for something.  Now I'm not sure.  They have hooks on the back, they could be interesting shelves to put small things on.  Even if they don't work, it would look different.  I have a feeling they work though.  I hope to find a way to hook them up to a tv, and then I could use them as surround sound.  That would be fun.

Anyways, for 3 bucks, I think I came out ahead by a wide margin.  In fact looking up the JBL speakers on Ebay, some of the same kind have sold for $10-$20 bucks in the last month.  Maybe I can make a few bucks, but most likely I'll keep them.

So that wraps it up for today.  Before I go though I want to post a link to my Youtube page.  I'm not asking you to check it out or even subscribe, but wanted to mention it.  It's what I've been spending a lot of time on lately.  In the last few months I've spent more and more time on Roku looking at Youtube and got tired of searching for stuff on there, so I started making playlists so it would be easier to watch stuff.  I plan to make more playlists, but for now I have 3 live camera playlists. One is all animals, mostly Penguins since my mom likes them.  The other two is random places and such.  I have somewhat of a focus on colder places and beaches.  I hope they look nice when it snows, and hope the beaches look warm when it snows here.

In addition I have dedicated pages for Christmas and Thanksgiving.  I hope to build on them in the next few weeks and even work on some dedicated to music.  My main focus right now are parades.  I also have a playlist dedicated to Movies.  They are for the most part Made for Television movies from the 80's and 90's, but they are still some you may not find on other streaming services.

In the future I hope to do more with music and other random stuff, and always open to suggestions.  I never look up too much related to trading cards on there, but if I do I might make a list.  I tend to change them up often, so if something isn't on there one day, you know I've been working on it.

In the future, once I get ideas I might even start uploading more stuff on there as well.  I don't plan on doing any related to blogging, but you never know.  Anyways here is the link.  https://www.youtube.com/user/jupiterhill

By the way I know the ones I created are bad, but they are worth cringe watching at least once.  If you do want to watch or subscribe I thank you, and if you have any ideas of future playlists, let me know.  I might work on some wrestling and arcade stuff in the future as well, but might need ideas.

Anyways, thank you all for reading and I hope everyone has a great week.