As spring appears and Topps has released the 2017 version of the Bunt cards, a couple months ago I bought a box of the 2016 cards, and I'm finally going to show them off.  I really wanted a couple other items from Dave and Adam's but I had a coupon for 5 bucks off 50, and figured I might as well add some newer stuff anyways.  Let's take a look at what I got. 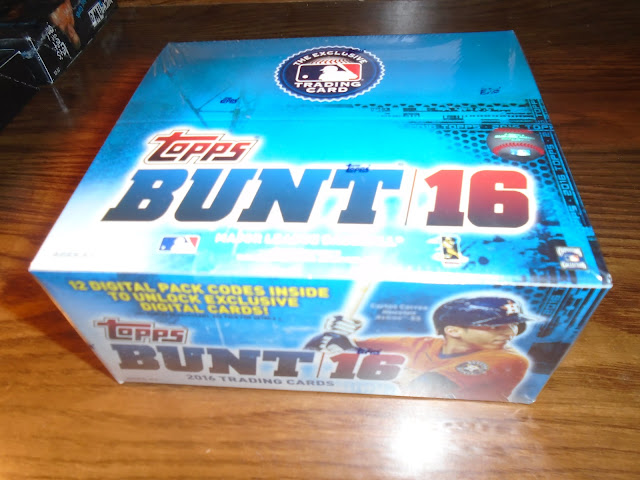 First let me say that I was excited when I got this, but I really thought I bought a hobby box, but I didn't.  I never bought a hobby box before of anything, so I was really wanting one, but maybe next time.  My only real goal was to get a complete set, or be super close to it, or at worse filling out the Royals team set. 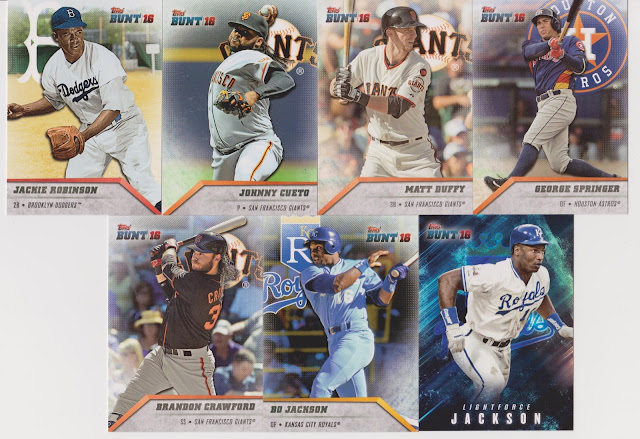 I thought I would show the first pack I opened.  Right off the bat, the first card I see is Jackie Robinson.  I think this will be a good pack.  Next card was Johnny Cuerto, a former Royal.  If all the packs are like this, I'll be real happy.  A couple cards later was the insert, which was a Royal and of Bo Jackson no less.  This pack was amazing.  Close it out with another Bo Jackson, and I don't think I'll find a better pack in this box.

Since I have no desire to show every pack, I sorted them out and will show some base cards first. 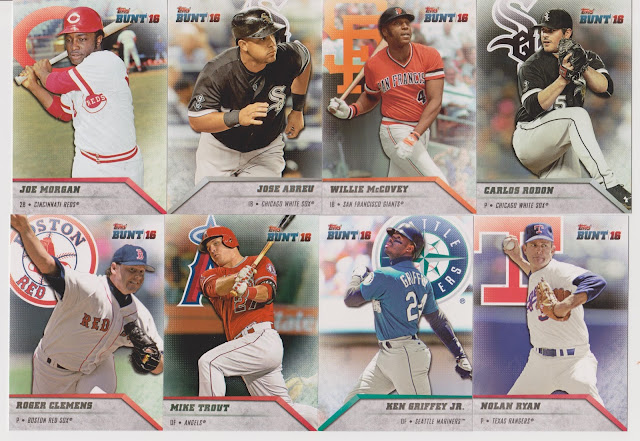 I really like how they mixed in some legends with some current players.   I think the Griffey and Nolan are my favorites in this bunch.  It's odd that the background logos stick out so much in some photos and are sometimes hard to spot in others.  I really like the design though, and I was aware of what they looked like before buying them, so I didn't go into it blindly.  I really think at this point Topps could discontinue the Opening Day set since its basically the same thing as the regular series at a smaller price point.  Replace it with Bunt with the dollar a pack price point, and it would be great.  It's a simple design, but I like how its different then the flagship set. 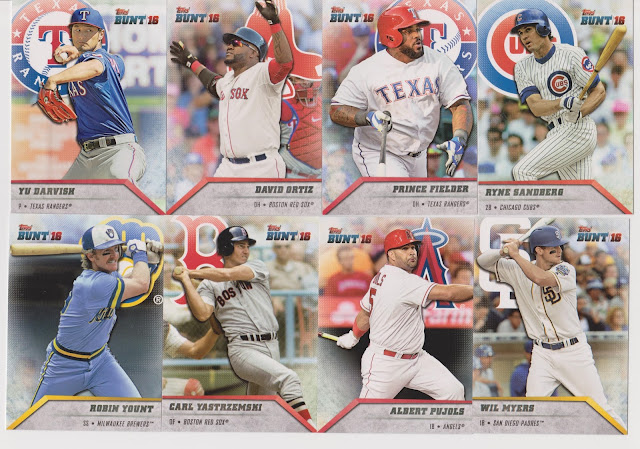 Another thing I just noticed is how the team logo's varies from card to card.  Yu Darvish has a different Ranger's logo than Nolan Ryan got.  I presume they use the logo from the year(s) they played on the team for the older players and use recent logos for current players.  That is a nice feature to use, especially since they have the licensing from MLB.  I hope they use that more often.  If they already have, I hope I notice it more often from here on out.  As for this batch, its hard to pick a favorite and I seemingly collect all of these guys.  If I had to pick one, I'd have to go with Yount because I was most excited when I pulled it.  If Pujols had a better photo, it would be considered too. 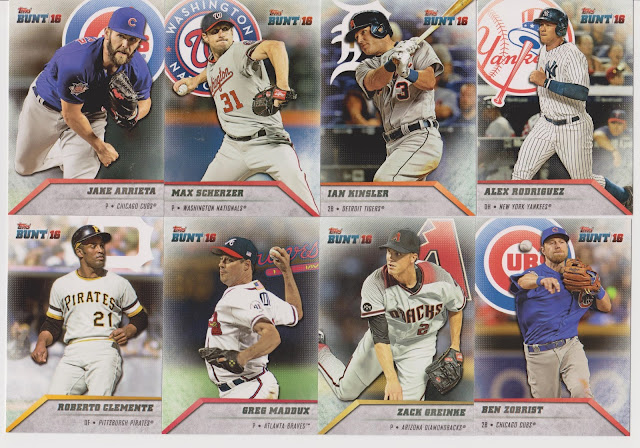 Clemente and Maddux?  You know this made my night pulling these two.  Add in former Mizzou products Max Scherzer and Ian Kinsler and this is a good batch.  Also a couple former Royals and an A-Rod and now we're cooking with fire. 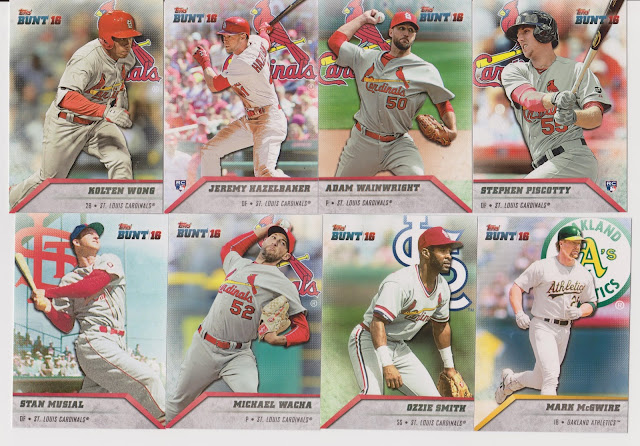 I nearly had an overdose of Cardinals.  However the Wong, Wacha, Ozzie, and Musial all fit into my collection, and I think I can find room for Waino, and Piscotty, and I'll hold a spot for Hazelbaker since I don't know a lot about him.  I also like how they have McGwire as an Athletic instead of a Cardinal, nice move.

So far I'm doing good with completing this set, I hope I can complete it. 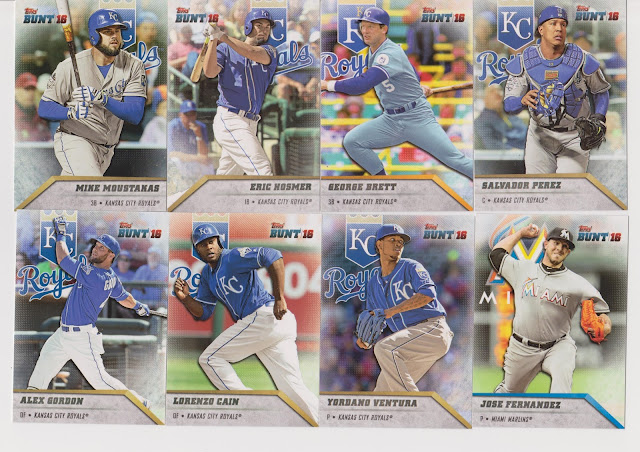 How bout them Royals?  I have no idea why I couldn't organize them better, but hey I scanned them.  I mean it took two months to blog about them, so at least I'm doing something.  I'm happy I got all these cards.  However I did get a little teary eyed pulling the Ventura since it was the first card I got of his since his death.  Likewise it was also sad pulling the Fernandez card even though I didn't really collect him.

When the dust settled, or should I say, the packs opened, I did finish the entire base set, so I was pretty happy.  With that out of the way, let's see the inserts I pulled. 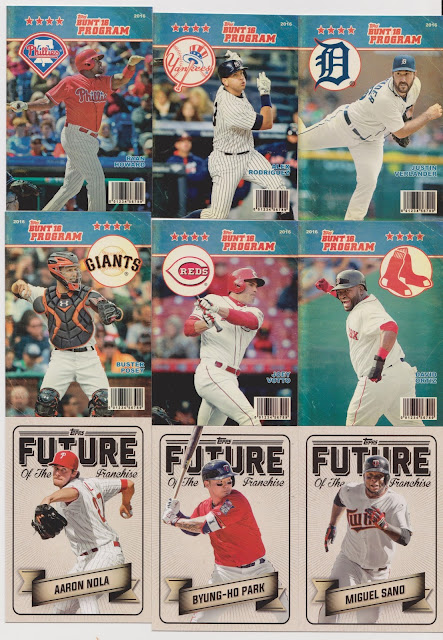 I must have been tired when I scanned these.  No way I would have scanned them all messed up like this.  At any rate, I really like the program set, it is something I hope they did again in the 2017 set.  Maybe take it a step further and make it like a Collect-A-Book and have a page or two inside it.  The Future of the Franchise isn't bad either, but a tad plain for an insert set.  Still, I can't complain. 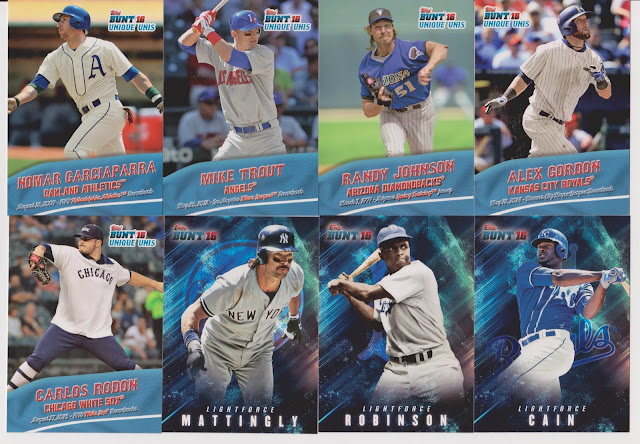 I love the Unique Unis set.  I hope that is a product in every future Topps series, as there is so many special uniform days now that it can be done.  The Lightforce set isn't too bad either but I'm not a fan of the name.  I do like the look of the cards though.  I like how I pulled some Royals in these insert sets too.

So overall in one box I got the whole base set, and got some nice inserts too.  I can't complain about the box or the series and I think I might buy a box of 2017, even if I do wait a few months when they go on sale.  I made a promise not to buy any Topps cards from 2017 because I don't like the design, but if I saw a pack of these, I would think about it.

So in reference to the cards I bought from Dave & Adams that this was a part of, here is the picture again.  I think I posted it last time I did a post on some of the cards, but here they are. 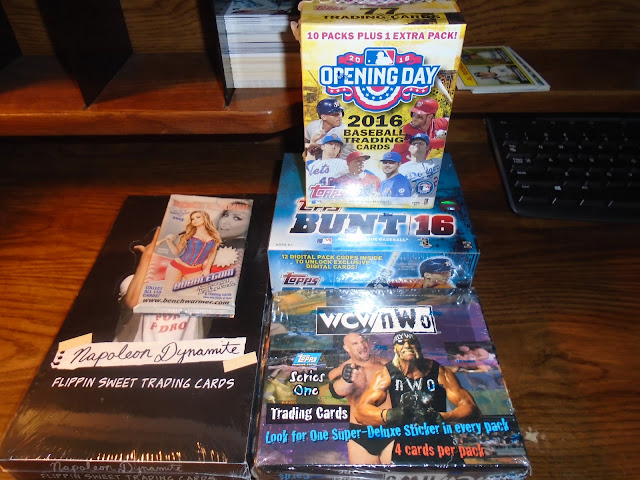 Somewhere along the way, I didn't scan the Opening Day cards, but since it was a blaster box, you didn't miss much.  I was hoping to get closer to a complete set, but came up quite short (even before you account for the doubles I already had, so I think I'm done with that.  So I guess next up will be the cards on the left side of the photo.  I already scanned the Benchwarmers, and once I scan the Napoleon Dynamite cards, I hope to post them.  I'm trying to scan them all for the Trading Card Database, but there's no checklist yet, and its tough to name the cards for a checklist because quite a few don't have words on them aside from his name, and they aren't numbered.  So once I figure it all out and scan the cards for that site, I'll post the cards on here too.

That wraps it up for today, thanks for reading and have a great night.  I'm hoping it won't rain this weekend and I can go to a flea market or something and take some pics.  If I do, I might have a blog or two next week.  If not, I just had to move all my cards so I guess I might sort them again.  Anyways, it should be fun whatever happens.