While I'm a bit backed up on posts and vow to catch up soon, I thought I'd do a smaller post today.  My family celebrates Christmas in January since we don't all get together all the time and we sandwich a get together between Christmas and my mom's birthday at the end of the month.  This year we plan to have it the first weekend of January.  Part of that decision was based on the assumption the Kansas City Chiefs would have a bye during Wild Card weekend, so if they could not screw that up, that would be great!

Since we plan it later than normal sometimes the Christmas decorations don't go up very early, but I finally put the trees up this year and have a decent display. 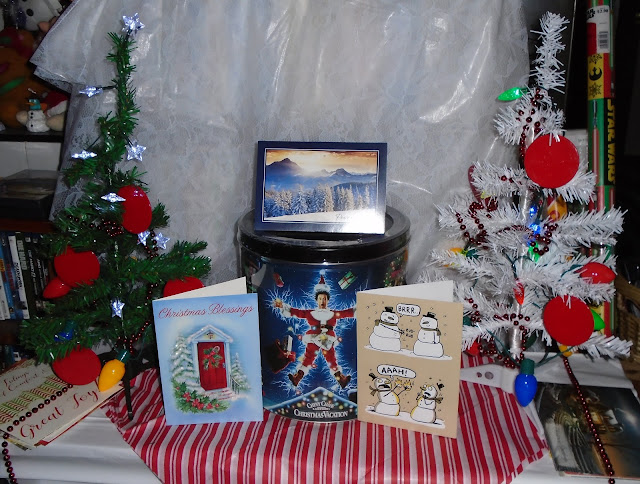 Hey I like this little trees, that I got from Dollar Tree.  THEY ARE LITERALLY DOLLAR TREES!  The lights on them also came from there.  The red decorations on the trees came from a second hand store where I got like 10 for a nickel.  The round things were connected to the beads when I got them.

The cards were ones my mom and I got in the mail this year, with the snowman one coming from my sister who always sends a funny card.  The Christmas Vacation popcorn tin took a while to find but I finally got it at Walmart.  When they first put out the tins this year they only had one, but it was dented really bad.  So last time I went they had more and I grabbed it.

Keen eyes might also notice Star Wars wrapping paper on the right of the photo as well as a Perry The Platypus ornament on the left.  He is sitting in front of Fozzie Bear and Miss Piggy from the 1988 McDonald's Christmas toys.  I really should order the Kermit to finish the set.

Since I'm talking about Dollar Tree, before I show a couple gifts I've already got, I think I'll share some deals I got recently.  One of the things I've wasted my time on this year is watching movies and becoming a member to a forum discussing movies and having a 50 Movie Challenge.  The basis is you watch 50 movies a month.  I reached 40 last month, and might hit 30 this month.  The reason I found the site though was to find out about movies sold at Dollar Tree.  Since July, I visit the site daily to find movie deals, and get info when sales are about to begin.  A few days ago I got a tip that Dollar Tree might have a new stock of movies for sale, so we took a trip.  And honestly, we'll probably go again tomorrow or Friday. 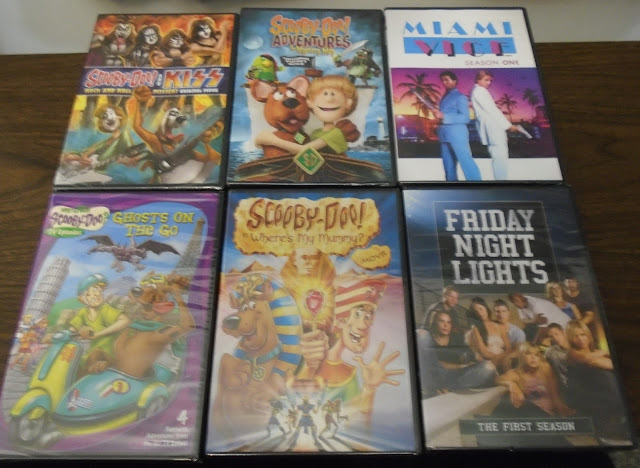 If you thought card collecting was addicting, so are movie collecting.  At this point I don't need more movies, but honestly, how can you pass up $1 movies?  What members on the site call "blind buys" spending a buck is still cheaper then renting a movie, and if its good you can keep it.  If it sucks, at worst you could donate it somewhere.  As I walked in, other people were checking out the movies, but I found a spot and dug in.  My nephew is a huge Scooby-Doo fan so when I saw these, I knew I had some gifts to give him.  The one I did keep was the one with Kiss, since, you know, its Kiss.  I'm not their biggest fan, but I do want to see it.

Then I found Friday Night Lights.  I've never watched the show, but oddly enough I once owned the first half of season one.  I think I gave it to a friend.  However, FOR ONE DOLLAR, I could get the entire first season.  15 hours of entertainment is worth that.

Then I found Miami Vice season one!  HOLY CRAP!  I watched most the series recently on one of the streaming apps, but now I can watch it anytime without it possibly buffering or sitting through commercials.  By the way I believe the NBC app on Roku has the whole series, but again, while its free, it does have commercials, though I could live with that.  On a side note if you have CBS All Access or want to do a trial of it, most of the Nash Bridges series is on there and it was fun to revisit recently.  My trial just ran out, but I thought it was worth the 5-10 bucks a month to watch older shows and even live TV if I need to.

Here's the thing though, as I may have discussed before, I'm trying to stop buying DVD's especially since I have a Blu Ray player now so I'm looking to possibly upgrade movies and hoping to find digital copies as well.  So I was quite pleased I made this trip.

I found a nice amount of Blu Rays this time, though from this picture of the ones I bought, the only one I've seen is The Marine 3.  I liked the movie and have been wanting to get it on Blu Ray since I have parts 2 and 4 as well.  I have the first one on DVD and would like to upgrade soon as well.  The rest of the movies were called "blind buys" but again, I think I'll watch all at some point and all came with digital codes.  However The Warriors Way and Take Me Home Tonight were from a out of business company so I had to do a workaround and the digital codes only worked on Itunes, but oh well, I still have physical copies.  I've stayed away from the remake of Robocop but I thought I'd give it a shot and also wanted to build up my collection.  My goal next year is to watch at least one movie a week, and most the time them being ones I've never seen before.  With these additions as well as free streaming apps like VUDU Free, Tubi, and Roku Channel, I think I'll have plenty of options.

Hopefully I can find more next time I go, but if I don't I think I'm good for a while.

So anyways, lets get into the heart of this post.  My friend stopped by on Christmas Eve bearing gifts as he always does.  I had some stuff for him as well as gifts for his kids.  First gift I opened which I didn't take a photo of was a giant magnet of the Kansas City Royals logo.  The KC looks really well on the side of my fridge which is next to my desk.  That however is one I bought last week when I first saw them.  Though I told him this would still get used because I wanted to put another one up on my filing cabinet, so that's where it will go soon.  Unlike the one I got, this one I might not tear apart from the rest of it, just displaying it as a whole.

Then he had a box for me.  He always finds great things to give me, and I feel bad my gifts are nowhere near as good. 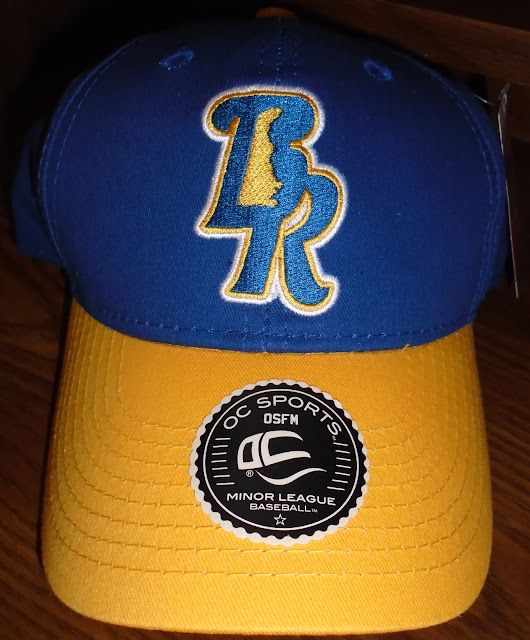 Is that a... Wilmington Blue Rocks cap?  SWEET!  They are the minor league single A affiliate of the Kansas City Royals.  Earlier in the year my sister got me an Omaha Storm Chasers cap which is the Triple-A affiliate of the Royals.  Getting this hat makes me realize I could potentially build to having caps for all the affiliates of the Royals.  My next goal is to find a Northwest Arkansas Naturals cap.  After he left I examined the hat more and was even more happy. 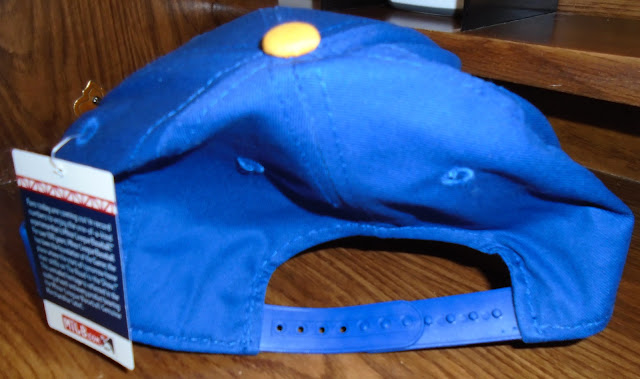 IT'S A SNAPBACK!  I'm not sure if he planned that or it was luck, but we've discussed how much I love snapbacks or even Velcro backs to fitted ones.  I guess I just like having the hole in the back.  That made this so much better.

However, he wasn't done, he had another gift inside the box! 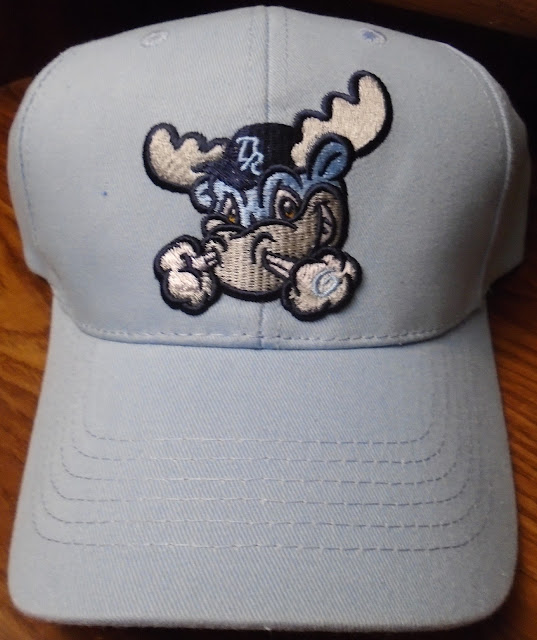 ANOTHER Wilmington Blue Rocks cap?  WOW!  This one features their mascot Rocky Bluewinkle and if I ever bought one this would be the one I'd get.  Since this is the single A team and they are based in Delaware, I don't follow them as much, but I do try to follow them throughout the year. 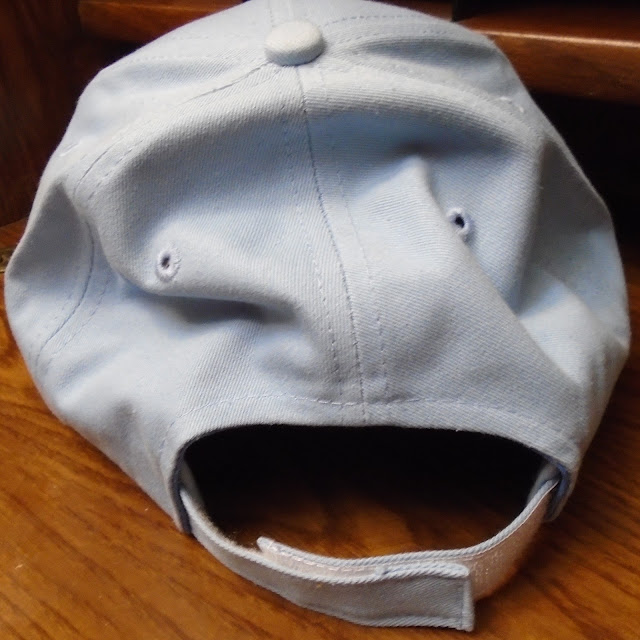 This one had the Velcro back and again, I love it.  I hope they never stop making them like these.  I also love the color of this hat.  It will be tough to decide which hat to wear out in public now when I got out.  While I have a ton of hats, I've narrowed it down to the Royals and Storm Chasers before I got these.  Now I might have to get a hat rack or something to not only display these but so I can have them ready.  I might get my Reese's cap back out and wear on occasion next year as well.  Also when my nephew came over he asked me about a gift and alluded to he might get me a hat as well, so my head will be covered up nicely for a long time to come.

So that wraps up this post.  I can't think my friend Jason enough.  He finds great deals, and one day I will find something he will really enjoy.  Thanks everyone for ready and I hope you all had a great holiday season and Christmas.  I've read a few blogs lately and it looks like some of you hit the jackpot.  I'm hoping to do some more scanning soon and might churn out another post before the new year, if I don't I hope everyone has a Happy New Year!