So today marks I guess a new feature on here.  It really it just an extension of a regular series on here called Savvy Shopping, but it spawned from a realization a few months back.  I really wanted to do one of those subscription crates like Loot Crate or something, but I'm cheap.  I also am quite sure I wouldn't like everything I'd get in the crate so I never did.  My reasoning: Why pay 20 bucks or more for a box of stuff I don't know I'll like.  Plus, I'm cheap.  I do look at another bloggers subscription crate each month and sometimes really consider getting one, but usually the ones I really like sell out.  By the way if you have never checked out Dinosaur Dracula I highly recommend it for folks stuck in the 80's and 90's nostalgia like myself.

Anyways while taking photos of stuff I bought from my local second hand store, Savvy Seconds, one day I realized that I'm basically building a custom crate of stuff that I like on most trips anyways.  So not only am I getting a handful of items, but also spending much less.  I've been looking at thrift shop finds on reddit and my goodness am I glad I live in the Midwest.  They find stuff for 30 bucks I can find for 10.  They pay 5 bucks for used CD's where I won't even consider more than paying 2 (and that's if I REALLY want it and in KC or something.

So the concept is easy, whenever I get more than a couple items in one trip, I will call it Savvy Loot.  If its less than a few items I'll either post it as a combination as a regular Savvy Shopping post or cleaning up post.  If its something like 30 CD's I get (doubt I'd ever do that), it would also be a regular shopping post.  If I find trading cards, it will depend on how many how I will post them.  Today it will include them in the Loot post since I only got 10.  20 or more might get an individual post.

Enough Talk, let's start looking.... OH WAIT, Let me PAINT a cool graphic for this feature like I did for my Ranting and Raving feature that I hardly do since I never post.  Wait a minute...

Wow, that's not creative at all, but oh well, let's get on with it.  What to start with first.  Let's get the music out of the way.  I bought one CD. 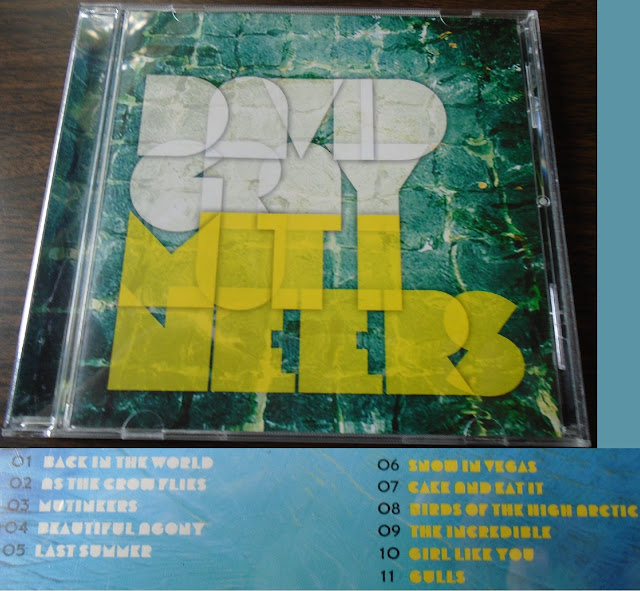 I was a bit excited to find a David Gray CD, but I didn't recognize any of the songs.  I haven't listened to it yet, but this came out it 2014 it looks like so it was well past when I was listening to him.  However for 50 cents, its a good start.

Let's stick to music and find these rare gems from yesteryear. 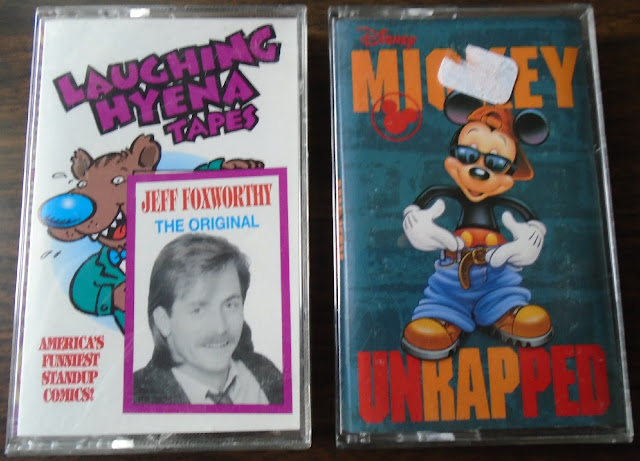 At the price of 2 for a quarter, how could you pass it up.  Kids, these are called cassettes.  I mentioned to my mom that kids today have no idea what these are and in a few year won't know what CD's are.  She replied "I bet they never heard of 8 tracks either".  I had to remind her that 8 tracks were more or less obsolete by the time I was born, but she was right.  Anyways, I saw the Jeff Foxworthy cassette and was pretty happy.  Next to it was another one of his and I grabbed it.  Unfortunately that one contained a Roy Mercer album, and while I never listened to Mr. Mercer, I was in the mood for America's Favorite Redneck.  So I went looking for another cassette.  Not much different from the last time I looked, but I did find Mickey Mouse singing rap (with help from the likes of Tag Team and Color Me Badd no less).  I'm out a quarter and an hour if its total crap.  For comedic value though, I think it will be worth it.

Let's move on to things you can watch.  I passed on some DVD's this time since none caught my eye, but another relic kids today may not know (as judging from the React Channel on Youtube), VHS tapes! 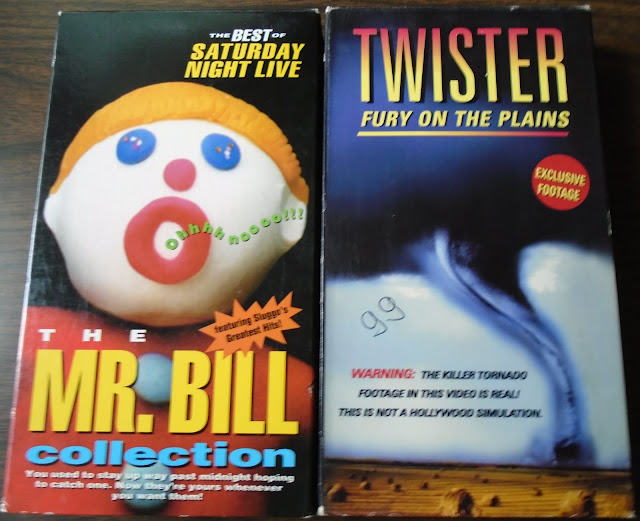 Priced at 5 for 50 cents, if I find one that I have an interest in, I tried to find 4 others that are oddball or they don't have on DVD.  So basically no actual movies but more along the lines of  "some sucker will buy this randomly put together crap if we put it on VHS and try to sell it".  Jokes on them, I'd never pay full price, but a dime a piece, I'll give it a try.  Maybe I'll upload these to Youtube unless someone beats me to it.  Doubt I'll do it for Mr. Bill since SNL is a bit strict, but oh well.

Mr. Bill wasn't something I have memories of, but it was oddball enough to grab it.  The Twister one is a bit of an odd choice since there's been an outbreak of tornadoes around my neck of the woods lately, but no way you'll find it on DVD.  However I think it might be on Youtube. 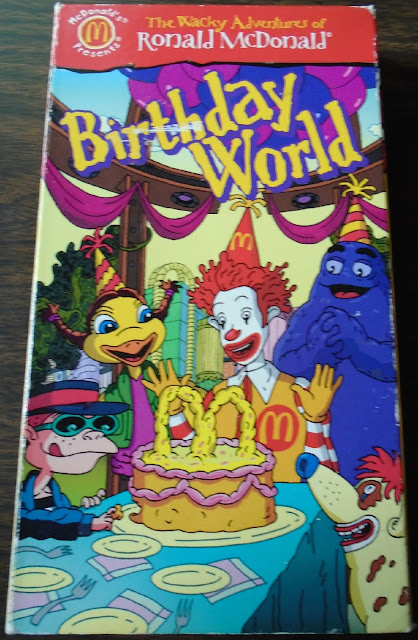 WHAT THE??? I bought this because of the scary image of Ronald McDonald and no other reason. 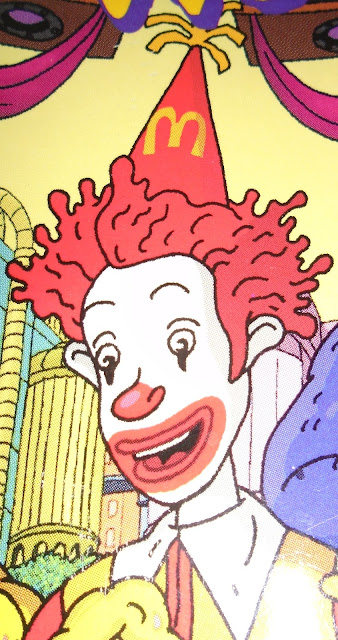 That will haunt your dreams!  However it also reminds me of Rugrats animation, so now I'm intrigued.  If you are as well, this is on Youtube already, so no need to upload.  The positive/negative of finding these on Youtube is I didn't need to get them in the first place, but at 10 cents each, I'm not out much of anything.

Those were ones that were filler.  Most crates seem to have filler, but they also have killer!  So less filler, MORE KILLER! 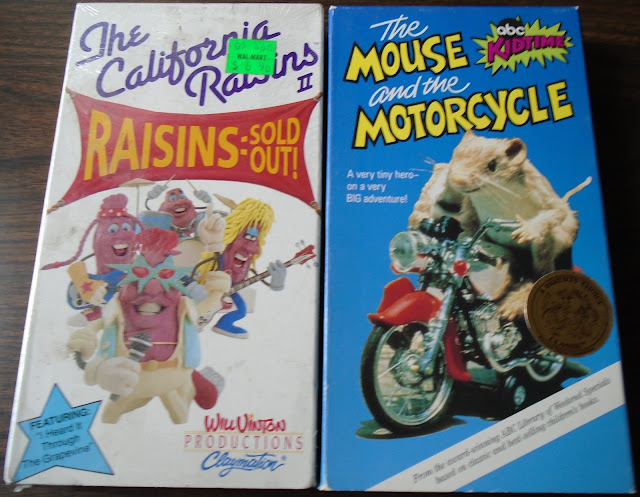 Originally, the only reason I got 5 movies was because I saw The Mouse and the Motorcycle.  I'm very afraid of mice, but I loved watching this growing up.  I was happy to find it.  After finding 4 tapes I was really just ready to go, so while hurrying up, I stumbled on the California Raisins.  Even better is its still sealed with a vintage Walmart price tag on it.  HA HA! 7 Bucks!  More like 7 cents!

So lets look at the 50 cent or less table. 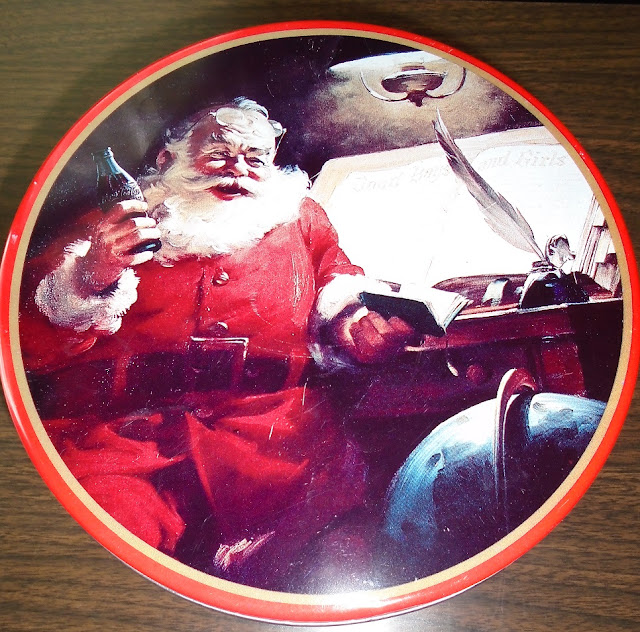 10 cent tin?  Sure.  Has a few marks on it, but its great to display at Christmas time and when not on display I can store stuff in it.  I think that's a good deal.  I did pass on a Twix tin, but it didn't have anything on it other than the logo.

So I did find some cards this time, and most are leftovers from the 10 cent stash they've had for a few month. But found a few new ones so I got 10 I thought I didn't have or would go into various collections. 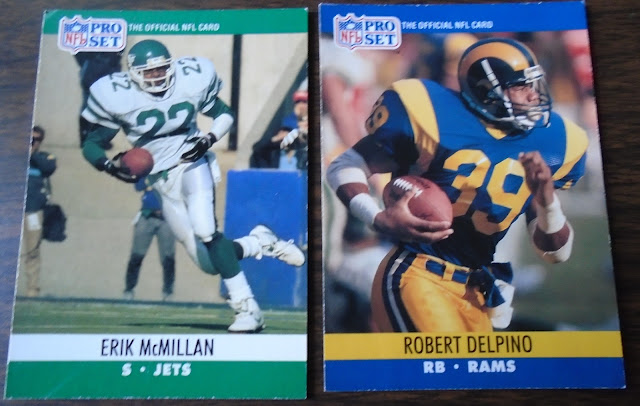 The most iffy purchase were these two cards.  I have a ton of McMillian and Delpino cards from my Mizzou collection.  Surely I had these already.  Turns out I did... NOT!  I had another McMillian from the set but not that one.  So I was pleasantly surprised these weren't doubles. 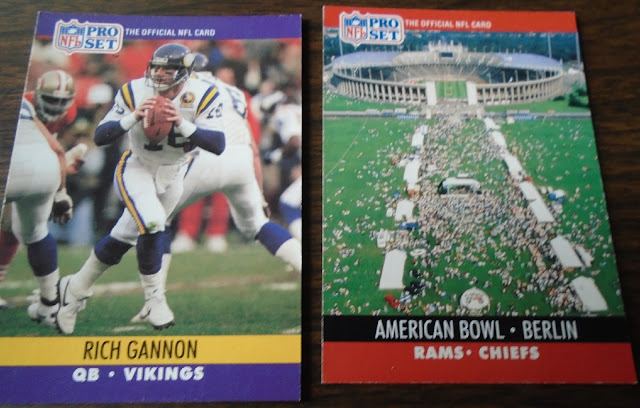 I'm not sure if I have a Rich Gannon card, so its good to get one.  I've been working on sorting my collection and have had success so I'm getting better at finding out what I have (though my Mizzou stuff is really outdated, so time to upgrade).  The American Bowl card I've never seen and figured it would be a nice addition to the Chiefs cards I have.  It seems like an odd card though, almost like a LEGO creation snapped from above to make it look huge. 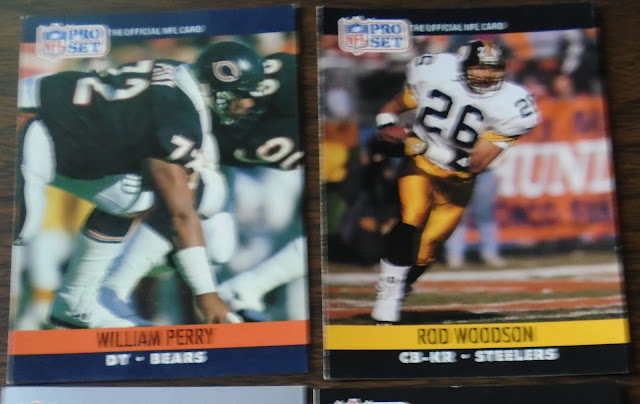 My goal wasn't to get a bunch of football cards, but here we are.  Hard to pass up some Hall of Famers. 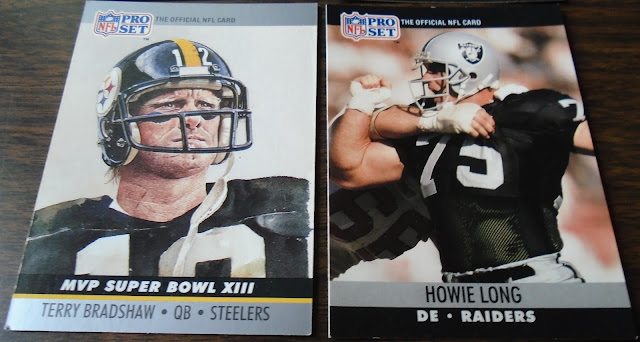 and more Hall of Famers.  While I don't plan on making new PC's for football players, I will still get some Terry Bradshaw's that I like.  I liked this one.

Again, these were for the most part filler, I just wanted to get to 10.  So what was KILLER to me? 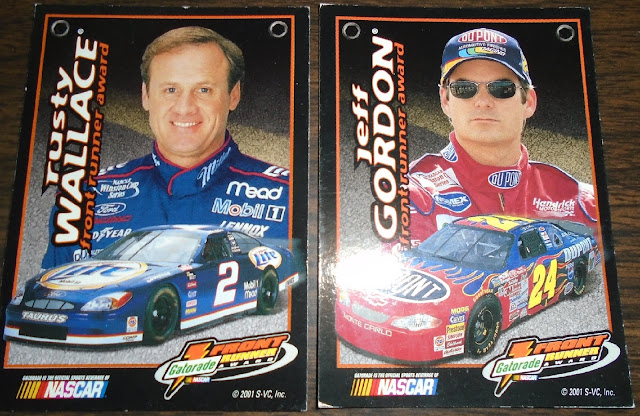 NASCAR Gatorade cards?  I never heard of these and was curious to find a huge stack of them.  After getting home I realized I could have got about 4 of the 10 or so cards but I only got these.  The others were tons of doubles of these and Ward Burton and maybe Bobby Labonte (forgot the other one).  Since I couldn't build the whole set, I'm glad I didn't get them.  I got the Gordon because while I was once a huge fan, I got tired of him winning all the time and found other drivers to root for.  But its still nice to have some Gordon cards, especially ones you don't see everyday.  The Rusty Wallace I bought to add to the Missouri collection- people born/lived/associated to Missouri (Mizzou is a more specific set, this is for everyone else).  If they had a Mike Wallace I would have gotten him or Kenny.  Think I might be working on that though.  At any rate, happy I got this card.  Too bad it wasn't earlier when he was still driving the black Miller Genuine Draft car, maybe one of my favorite car designs ever (even if it was basic).

So a nice loot crate, and a total of $2.35 I did much better than a $20 box that would maybe have more stuff brand new but not stuff I'd be interested in.  To top it off I also got a free item as well as I was leaving.  I didn't need it but hey, its free and maybe I'll find a use for it.

I covered the winner's name but thought this was pretty cool.  I was never artistically inclined so I never won one of these, but once did do a good tracing of Billy from Family Circus and I was proud of that.  I'm thinking I might remove the name on the bottom and display this on a shelf for my mom.  I mentioned to her she could put it on a shelf and on each side have a drawings from her grand daughters.  She liked that idea, and they are much more talented in drawing then I ever could be.

So overall I think I came out quite nice.  I also managed to write a second post this month and that is also nice.  I already have plans for a few more, one on a more serious note but need to gather a few things before I post that one.  I enjoy doing those, but more details later.  Anyways, thanks for reading and hope everyone has a great weekend!