I've been working on scanning pictures a few days last week, and when I finished I realized I had a few more to scan.  Last month for my birthday, my best friend brought me a few gifts and among them were some pictures.  He is a really good photographer, but he didn't take these shots.  These were from before he was born.  These were from before I was born.  He got some pictures from a Milwaukee Brewers fan that would visit Kansas City to see the Royals and the Brew Crew battle.  Back then most remember they were division rivals, and I always think they paralleled each other while they were rivals.  Both had some success, and both had life long players that debuted around the same time and retired the same time, both went into the Hall of Fame at the same time.  I'm talking about Robin Yount and George Brett.

So the pictures were a nice gift, and I've been wanting to scan them for a bit and finally did it.  After I did I took a deeper look at them and did some research.  If I really tried I could have researched more and found out more, but I'm happy with what I found out.  So today let's look at some old pictures, and you'll be glad that you did.

Let's begin the trip at the airport.  While researching I found out that the terminal was rebuilt in 1972 and was pretty much a brand new airport when this was taken less than a year later in July of 1973.

You'll have to forgive me if these photos are out of order.  The person told my friend they were all from the early 70's but some were from later years.  I'm still fine with that though, as it still tells a history of the stadium.  It sure has changed from then to now.

So I did a little digging to find out when these could have been taken.  1973 narrowed it down a lot, and looking at the pictures gave me some clues.  In the outfield beyond the fence you can see writing.  I forgot that in 1973 the Royals hosted the All Star Game.  Which narrowed it down to July.  I found out Milwaukee played Kansas City as the final series before the All Star Game, so this was July 20-22,1973.  The one picture I thought was maybe a band setting up for a concert which threw me off because they did host concerts, and Three Dog Night did a show there in early August.  I think it was after the Sunday game  and they were preparing the field for the All Star Game.

1973 was the debut of the Royals Stadium.  While doing research, I found out something really interesting though.  These photos mean a lot more to me now.

At first I was like, eh not the best shot of the fountains, but through research I found out the fountains weren't completed in time for the stadium to open, and was delayed.  They were finally completed and debuted on the Saturday night before the All Star Game.  Meaning these photos were from when they first were turned on.  These could be the first photos when they came on.  I really like these now.

I don't have an idea when these were taken, but judging from other pictures, I think these were taken in 1977.  At least you can see the fountains better in these photos. 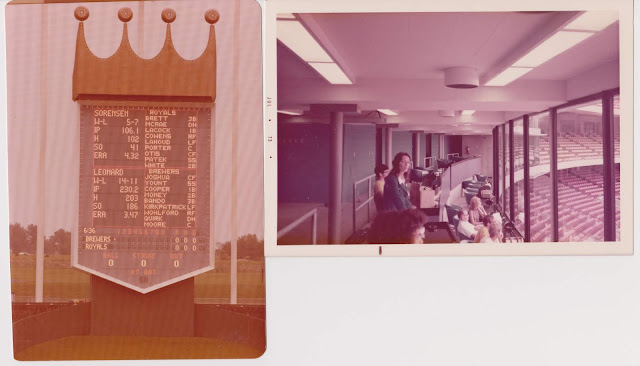 Here is more of the photos.  Again, I think most are the late 70s.  The top left photo is from 1977.  The game is from September 3rd, 1977.  Thanks to baseball reference I figured it out.  I assume the other borderless photos are from the same weekend.

My friend pointed out the photo of the press box shows the chairs that he and I now have.  I've show it before, but since I'm working on sorting cards I might take a photo of my setup and show my chair again soon.

Here is the final photo, and there's not much to say.  I do remember a few time riding past the Stadium and trying to get a photo like that.  I always smile when the few times I've been on I-70 riding past the stadium.  The other photo is the dugout.  It would be fun to stand in the dugout one day.

So with that I guess we'll wrap things up.  Before I do I'll show a few links for my research.

I had a lot of fun looking at these photos, and had even more fun researching them.  I have to thank my friend again for the photos, and I didn't even show the other gifts he got me, but unfortunately didn't get photos yet of the other items (they were too big to scan).  Once I clear some space I'll take some photos and include it in a future blog.

I hope everyone is doing well in these tough times, and hope you enjoyed reading this blog.  I'm not sure when I'll post next, but when I have time or something to post, I'll write some more.  Thanks for reading and have a great day.

Email ThisBlogThis!Share to TwitterShare to FacebookShare to Pinterest
Labels: 1973, 1977, Royals