When I order from COMC, its usually at least 6 months before I even consider another shipment.  However during the last Black Friday sale they had an incentive where you could get free shipping in the first quarter of 2022.  By the time the deadline approached for the free shipping, I had about 25 cards.  Normally it isn't worth it to ship them, but eh, it worked out perfectly.  I drained my account down to 2 cents, and I requested the cards.  I requested them about a week before the deadline hoping they'd come a bit sooner before everyone else who partook in the deal asked for theirs.  I don't think it made much difference, but like I said, I had no money.  I thought about trying to flip a couple, but none had much value and I didn't want to wait.  So here is what is likely my last COMC order for a while.  A combination of no money, and less of a desire of collecting is to blame.  I waited out COMC's shipping struggles, so I don't fault them on that.  I'm hoping to sell a few things and maybe add a few bucks, but I figure that will be later in the summer at the earliest.  So enough talk, what did I get? 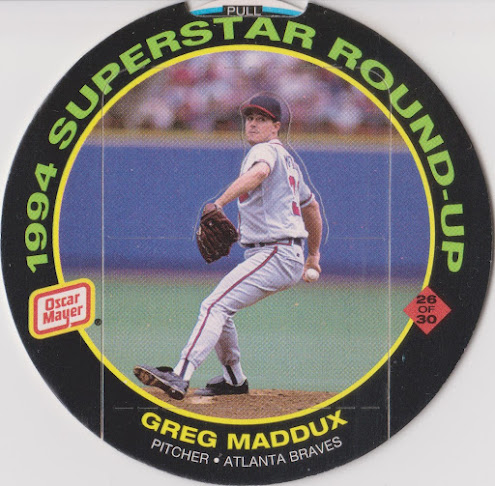 My collection has a first name, it's.... wait I never named my collection, but how could I pass up and Oscar Mayer card of Greg Maddux?  It was one I've watched for a bit, and a Maddux I never had, plus it was cheap.  I forgot the price, but I had less then 10 bucks in my account I'm sure maybe 15, so it was enough to get 25 cards, aka, under a buck.  I hope later this summer I'll reorganize some of my PC's, and maybe might work on Maddux a bit. 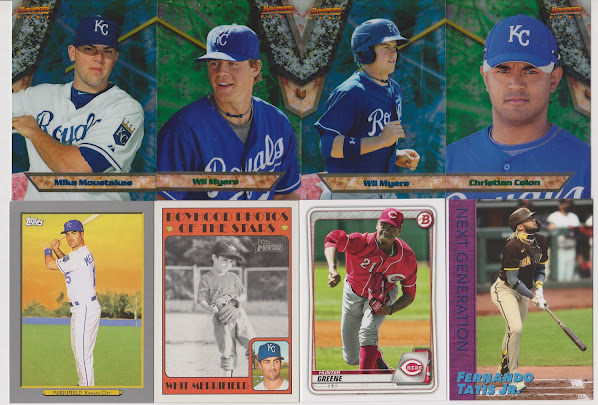 I had to get some Royals cards, even if they are the hard to find on TCDB Bowman inserts.  I don't fault the database, I fault Topps/Bowman for their dumb numbering.  BPP382Vo#$niner487 are terrible ways to number cards especially when they are named across multiple sets.  All I can say is I think the top 4 cards were the only 4 I needed (across 2 sets) so I think I can say its complete.  If I ever get back into collecting aggressively, besides the 2017-current ones, I think the early to mid 2000's are what I need to fill in the most.  Even up to 2011 I still have some holes.  I'm not sure how hard I'll work on the very early Royals from 1969 to around 80, but maybe I will.

Bottom row has a couple more current cards, one from 2020 one from 2021 (which is rare for me).  I still haven't watched a game this year, and still have no desire to.  I saw on Twitter the Royals are 14 games under .500 so I don't think I'm missing much.  The Hunter Greene card I've had for a while and thought about selling, but decided to keep.  I really hope he becomes a superstar, but as each year passes, it looks less likely.  The Tatis card I've also had for a while, and for a short time tried to flip it.  It was part of Topp's Throwback series where they'd do 4-5 cards a week in an old design from their past (like the Ozzie Smith Simpsons one I showed from my last COMC order).  This design is from the 1998 or 1999 Topps WCW set.  I really liked that set (Chris Jericho has a nice card with this design), and I wanted a Tatis card.  I'll also be honest and thought since it was a low production number I could maybe flip it.  I actually bought it for less than the seller wanted (I've gotten better at making offers on COMC the last couple years).  After he accepted, I did wait a while to try to flip it.  I didn't expect to make much because I'd been watching the card for a while and nobody had interest in it. Oh well, it looks nice in my collection. 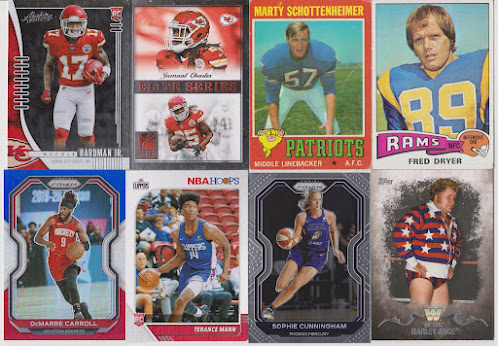 The Mercole Hardman I liked so I bought it fairly cheap.  Maybe since the Chiefs traded Hill, Hardman might step up this year.  The Charles card I've had for quite a while and got it cheap (under 30 cents), but got buyers remorse shortly after.  The same went for the Harley Race card and the Marty Schottenheimer cards.  I like them all, but I should have sat on them for a while before deciding to buy them.  They all look good though so I'm not too disappointed.  The same can be said for Terrance Mann.  I've been burnt twice on cards I bought for the sole purpose of flipping.  Both times have been NBA cards.  I should really stop doing it, but then again, the biggest flip I ever mad was on an NBA card, and it covered up the losses I made on the 2 bad cards, so I still came out ahead.  Most cards I do decide to flip are after owning them for a bit and seeing the price go up and deciding I don't really want the card or how many other cards I could get for the money I'd make.  I don't plan on being a flipper, but if I can get some good cards as a result I'll do it.

If you get a sense of Deja Vu, it might be because you read Penny Sleeves blog recently of his COMC order which contained the same Fred Dryer card.  I have a somewhat oddball collection of football players who became actors, and didn't have on of the Hunter star.  I don't actually have it organized yet, but when I do organize it, he'll look good next to Bubba Smith.  Two other cards in this batch are basketball cards which I don't actively collect unless they are Mizzou related.  For whatever reason if I see a cheap DeMarre Carroll card, I'll buy it.  I'd like to have at least one card from every year he played, so when I finally decide to sort my Mizzou collection, I'll see how far I've come.  I should be close.  The Sophie Cunningham is my first Sophie card and my first WNBA card in over 15 years.  I really would love to see Mizzou become a powerhouse in women's basketball, just so more players can make the WNBA.  Maybe I would watch the games more.  I am happy for Sophie though especially since it seems the Mercury are on TV all the time.

I don't know as many players on the Mizzou football team as I used to, but I still try to collect whoever I can when they are cheap.  I know of Hall though, so I was happy to find this card cheap.  I don't think that's a real jersey, it feels more like a replica, but still happy to have the card.  The Shields card I've watched forever on COMC, this card specifically.  I liked the way the fabric looked over the other ones offered up.  I finally bought it when my funds were dwindling just because I didn't know when I'd get a chance to.  It also completes that insert set, since I already have the Salvador Perez card.  I really hope I can get organized to start showcasing some of these cards.  I've been trying to organize other stuff lately and my card collection has taken a backseat.  It's okay, but I think in a couple months, I'll devote more time to it.  At least I hope.

Well this batch is almost up, but we still have one more scan to see, and it includes I think the highest paid card in the batch, and my favorite. 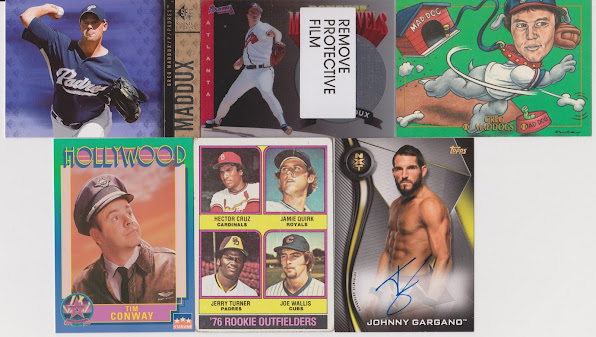 I added a few more Maddux cards, two which I've watched for a long time, and the Padres one I found cheap.  The Maddogs one I waited for the price to fall but it never did.  A few years ago I could have bought one for 55 cents.  When I bought this I think it was 80 cents.  25 cents isn't much, but if I played my "cards" right, I could have got at least one more card.  Oh well.  The Tim Conway wasn't as much of a buyers remorse as a jumping on the train before the prices potentially skyrocketed.  I feel bad about buying cards of recently deceased people, but I also don't want to pay double for them down the road if I do want them.  I sat on this for a while then decided to flip it.  There wasn't a market, so it wasn't a bad decision to keep it.  I liked him and I like the set, so who knows, maybe I will build it one day.  I know he passed in 2019, but I've had it in my account since his death.  That's how long I hold onto some cards in my account.  I didn't have it shipped earlier just because I tried one last time to sell it with no bites.

One more Royals card as I added a Jamie Quirk rookie for around 30 cents, not a bad buy though it has a small crease in it.  Finally the card I spent the most on- a Johnny Gargano autographed card.  I've followed Johnny since 2008 when he wrestled in a promotion called Pro Wrestling Ohio, and cheered him on ever since.  One of the only current wrestlers I actually have an action figure of, I've long wanted his autograph.  I finally decided to make an offer on this one and the buyer accepted.  Even though I wanted it in hand, I considered flipping it, but never really tried to.  I was going to try after he either went back to WWE or joined AEW, but as I write this, he hasn't done either yet, so the card hasn't really changed in value.  I'm glad I have it in hand now, so it doesn't matter.

Well, that wraps it up for this order, and for this blog post.  I might try my hand at another blog soon, but we'll see.  I'm still working on a few other projects, and as I write this my computer is acting up.  I think it needs a new fan and heatsink, and if that's it, I might be able to fix it, if its not that, than this blog might have to go on hiatus for a while.  If it does I'll either try to get a new post before or at least mention it on twitter.  Either way, I thank everyone who read this and have a great week.