The tradition in my family the last few years is to celebrate Christmas in January.  No its not some social statement or anything, its just that people are busy and January usually is downtime for everyone.  We also celebrate my mom's birthday as well, so its a nice combination.  This year we had it as I mentioned the day I found out Yordano Ventura passed away and I secluded myself more than usual.  However we opened gifts and everything and today I thought I'd show off what I got.  I actually got a lot this year, but a big chunk of it I was already aware of.  First we'll dive into what I wasn't aware of. 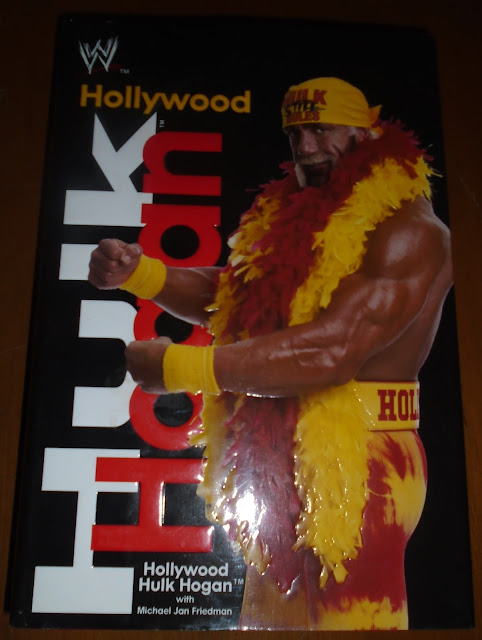 LET ME TELL YOU SOMETHING BROTHER!  I think I already have this book, but that's okay.  I never read it though so maybe this is my chance to.  I've got a trial subscription to WWE Network to watch the Royal Rumble last night (don't get me started) so I go back and watch old WCW stuff and Hogan is usually the focal point. 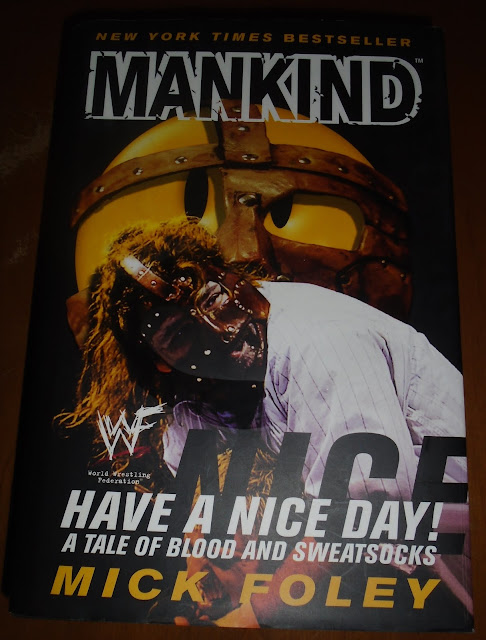 BANG BANG! BANG BANG! BANG BANG!  I have at least two Mick Foley books, but for some reason I don't think I have this one.  Aside being a big fan of his in WCW and his Cactus Jack days, I'm not as big of a fan these days, but that's okay, it still should be a good book.  He's one of the few wrestlers I've met, so its cool to have books from him.  I met him the same day I met Harley Race and Terry Funk.  That was a fun day. 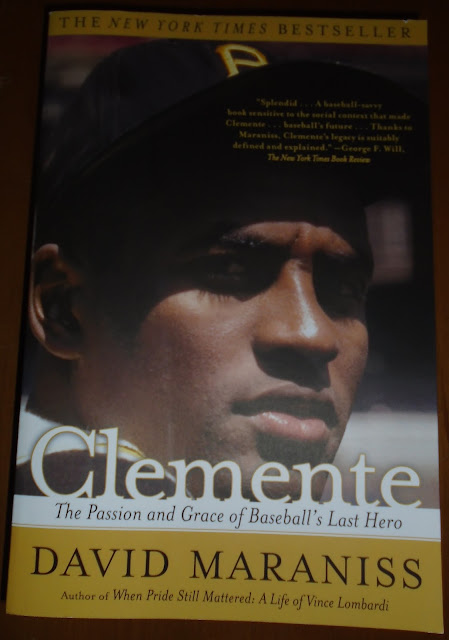 HERE WE GO!  I am ready to dive into this book, which you won't hear me say too often.  The two wrestling books I actually knew about, but I didn't know about this one.  I was really excited.  Then I got a bit sad thinking about how he died in the off season just like Yordano.  I know it was different circumstances but it still made me sad.  I might do a book report on it once I finish, but I haven't started it yet.

Since I got my Roku a couple months ago, I've been using all the free trials so its taking a lot of my time.  I just finished binge watching season one of the Robert Stack Unsolved Mysteries on Amazon, and hope they release more before my trial runs out.  It was sad I remember so many of the stories on there, but it was awesome to watch.

Another reason I haven't started reading yet is because I have to clean.  I have a closet that is mostly filled with cards and other sports stuff and I have to make room for more cards. 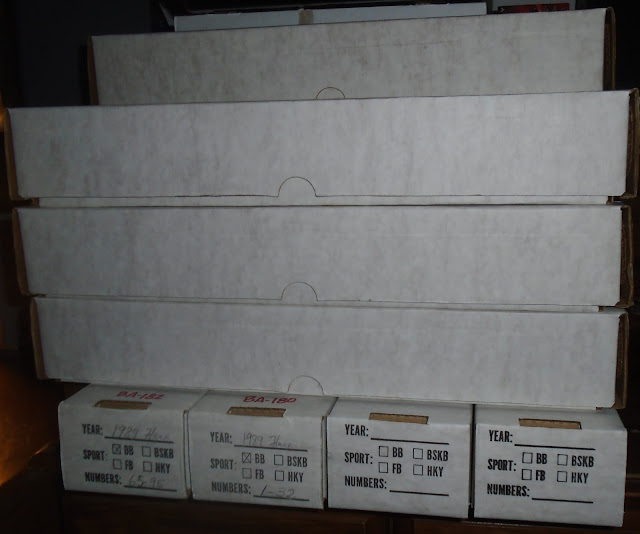 11 boxes! ELEVEN!  My brother in law saw they were being given away for free and asked my sister what I collected and she said, just grab them all.  She didn't expect so many, and then when she told me, I didn't expect so many boxes either.  She said a few boxes, so I was thinking like 5-6. She went through some and noticed it was a bunch of doubles and assumed most the good players were taken out.

She would be right, but I'm okay with that.  As she mentioned, if nothing else, I have some boxes I can use.  These boxes are nice too, they are two piece boxes which I've never used for 800 count cards, but actually I think these might be 1000 count boxes.

So now you may wonder what was in the boxes.  Well, here it is. 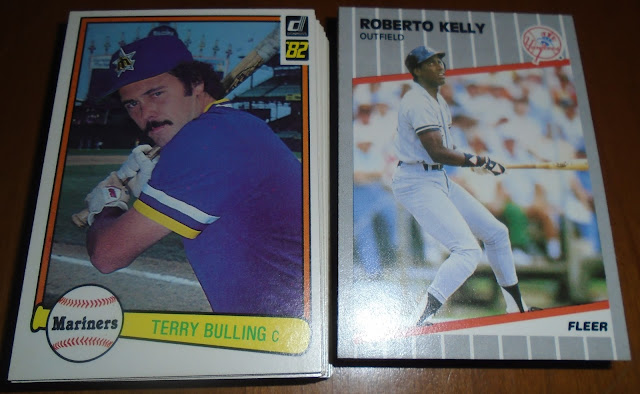 11 boxes of 89 Fleer and 82 Donruss.  That's it.  Again, I'm not made, in fact, I was happy to see the 82 cards because while I'm not a set collector, it would give me a good chunk of them and would be one of the oldest sets I have over half the cards of.  In total I got about 67% of the set completed, and yes, its missing the big names and rookies, but I did pull some Danny Ainge cards, which I've wanted for a while.  I also got one of the San Diego Chicken, and a few Royals as well.  I got some Error cards and some Corrected cards as well and overall I was happy.  I did even get a few rookies but none come to mind just yet.

No, none of Billy, but I'm fine with that.  Not as many of the 89 set, but I did manage to get 33% of the set, and I think I have some as well, so I might try to complete it.  Neither set are priorities and I'm not seeking out cards to finish the set, but I will keep my eye out.  Having said that though if you are missing some cards from either set and need some, let me know.  There were multiples of multiples of many cards just not the star names.  On top of being surprised at the amount of cards, I was surprised at the shape they were in.  They really looked like they were pulled straight from the packs and never touched again.  It had to be some dealer because I can't imagine a set builder having to buy so many boxes of cards to complete sets and having 30 extras of a common player.  Not mad though, it was fun going through them. 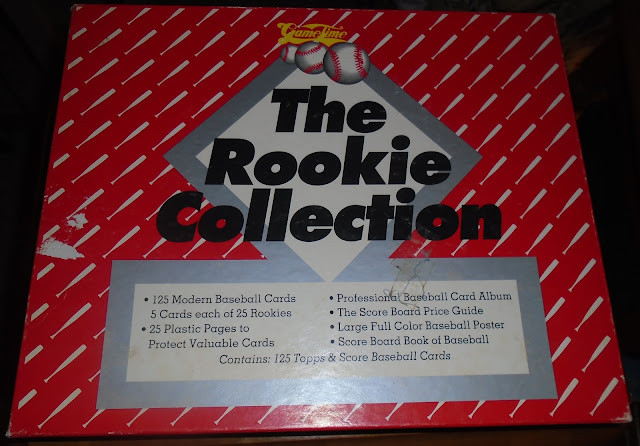 In addition to those boxes, this box was also included.  I have never seen this before and I couldn't find any info about it online either.  In fact I found very little about Score Board in general, but my assumption is that this was probably like the Hygrade Collector Kits from the late 80s.  The difference is that this box once contained all rookies if I'm reading it right and had other goodies.

I thought the box was pretty good actually.  It's in pretty good shape too beside one corner coming apart.  As for the contents inside there was more cards scattered inside, but it was a lot of random 91 Hoops basketball and other basketball cards.  It had a couple football and some baseball cards too.  There was one other item inside though I thought was pretty cool.  Not to say the cards weren't, I did find some Joe Kleine's I didn't have, and got some Olympic cards and even a couple Michael Jordan's, so not all bad.  Though this was the cool part. 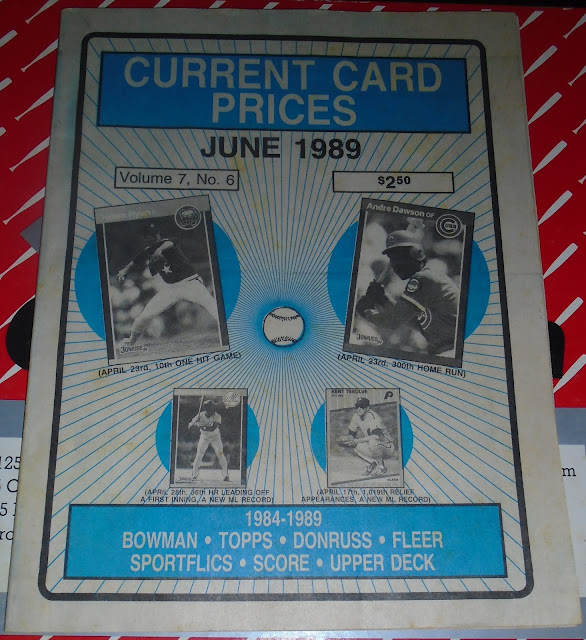 I never heard of this before either, but I found this issue online after searching a bit and a few others.  It seems they were somewhat popular.  I'm glad they had alternatives to Beckett back then.  I preferred Tuff Stuff to Beckett. 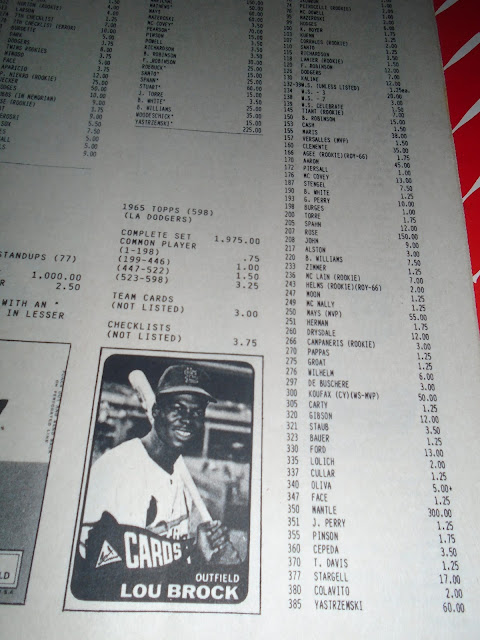 In addition my sister also got me some cards from I think a Saver's in St. Louis.  It was a bag of 1988 Donruss cards.  I got some decent ones in there and actually got 25% of the set filled with the cards, so it was pretty nice.

So that is keeping me busy for now.  Now to find room to store all of it.  It gives me a good reason to organize anyways.

So that wraps it up for today, thank you for reading, I hope you enjoyed it.  Have a great day.  As for me, I think aside from cleaning I might watch some more old wrestling on the WWE Network.  They've added more stuff since the last time I had it and I might watch some Smackdown's for 1999.  Later I'll turn on the TV and catch the Apprentice and then Scorpion.  Mondays are the only night I actually watch TV anymore.