I was at my local convenience store a few weeks ago and found a new card product there.  It didn't have a price on it, but I wanted to try it out (it was a day I came up empty after a Walmart visit).  So I tried my luck and it was 12 or 13 bucks.  Here's what I got, and heads up, not a lot of typing today, as I don't feel good and might try to sleep soon, but here we go. 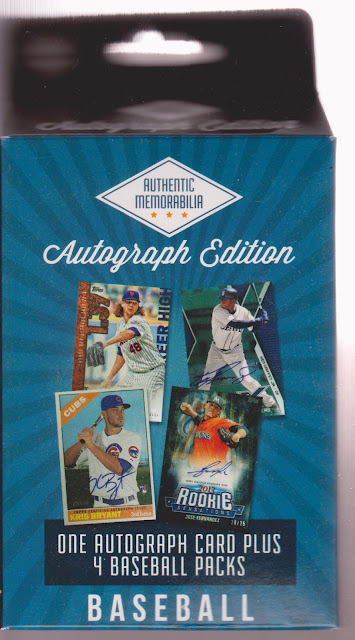 I figured 4 packs were about 8-12 bucks alone, so depending on the autograph card, I would break even.  I didn't expect a good autograph to be honest, but at least good enough to be happy. 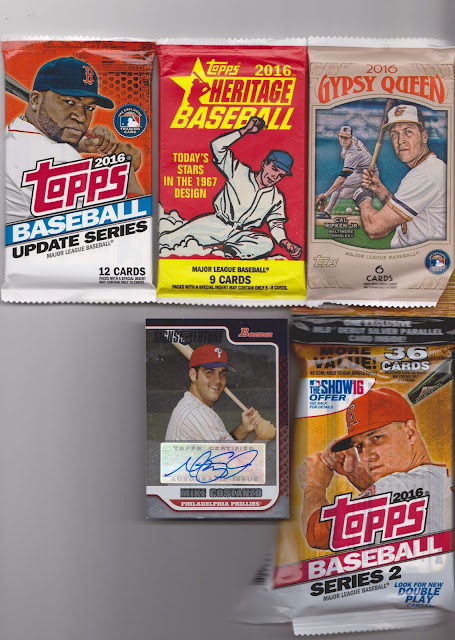 I admit, its not a bad autograph card, but I was extremely disappointed with how it was packed in the box.  It was just thrown in without even a penny sleeve to protect it.  so depending on how the boxes were handled, it could have been totally damaged before anyone opened it.  It really was at that point I decided I wouldn't buy another box, unless I really needed a fix.  As for the packs, I was a bit surprised at the jumbo pack, but happy they were all 2016 packs, though I would have been happy with an Archives pack, but I can't complain about the packs included. 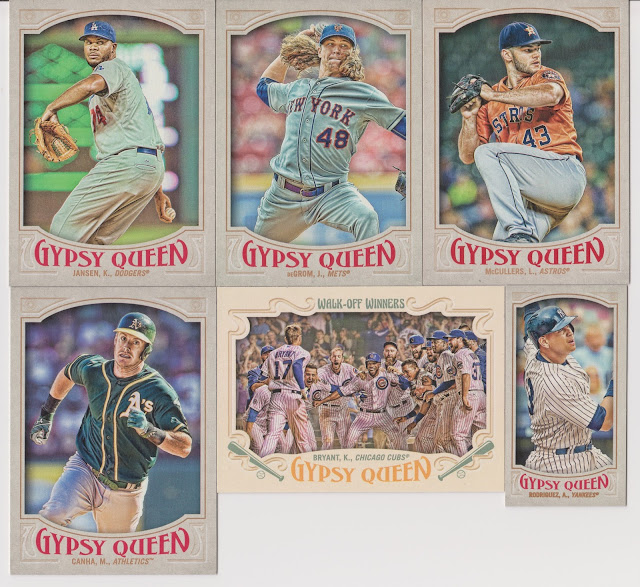 I'm not a fan of Gypsy Queen, but I think it was a really good pack.  I was happy with the A-Rod, and also pleased to get the deGrom, Jansen, and Kris Bryant cards.  So I was happy with what I got. 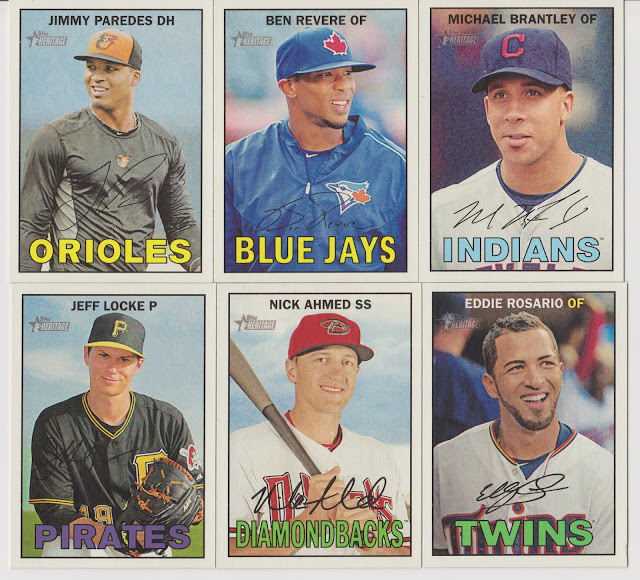 If I had my way, I'd discontinue either the Heritage or Archives line.  I'd use one of them, and use the Heritage cardstock, but the designs of the Archives.  I think they could even make it a slightly bigger set too, but not by much.  Anyways, as for these cards, I'm not too impressed with them, but I will say I like the Blue Jays and Diamondbacks caps.  Maybe one day I should get them at some point.  I have a Pirates one somewhere, and also a Giants one too.  Not to mention the Royals one I where proudly, and probably a Cardinals one that I have somewhere. 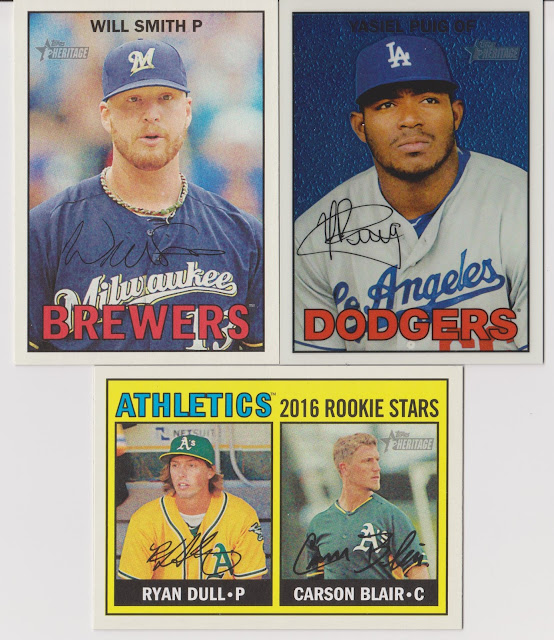 Will Smith, YES YES Y'ALL! Okay, I'm not that excited about it, but I did want to throw in a song reference there.   However, I was more than happy to pull the Yasiel Puig card.  I don't have many of him, but this one will go into my binder.  Lastly is an Athletics Rookies card, of a couple guys I don't know much about.  Its a nice card, but not a fan of the jersey Blair is wearing.  Oh well. 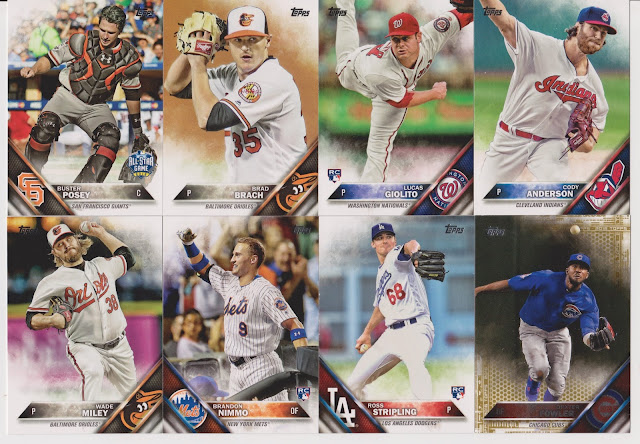 2016 Topps.  Not much more to say since I've blogged about it since they've come out. 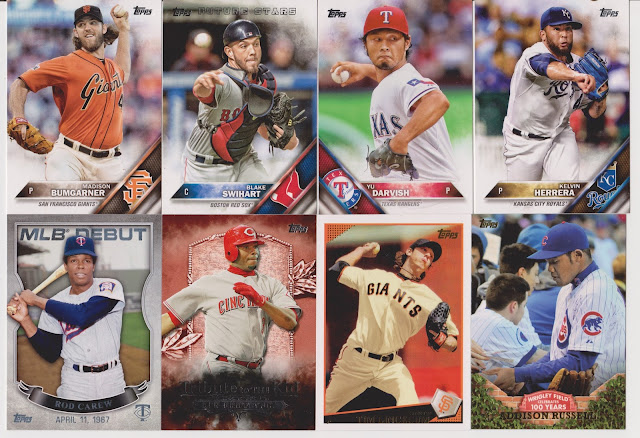 More 2016 Topps, and again, not much to add.  Though I was happy to pull the Herrera card.  Also happy to pull the Darvish, MadBum, and the entire bottom row, especially the Kenny Griff card.  I don't have a lot of good ones from his Reds days. 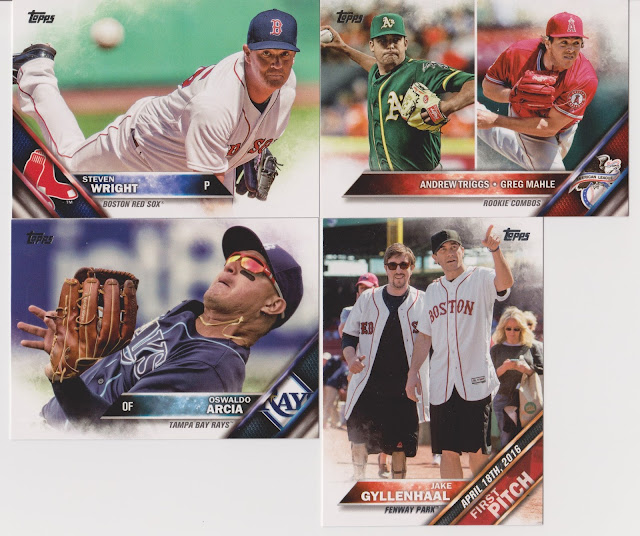 The last scan has a Steven Wright card I was happy to pull.  I see his name trending on twitter a lot and usually assume its about the comedian, so getting a card of the player allows me to know a little more about the pitcher.  Also to remind me to listen to more of the comedian.  Finally the Jake Gyllenhaal card was a nice surprise because I bought one on COMC a few weeks earlier, but now I can try to resale it.  I figure at a loss, but either way I have the card now and don't need another.

Overall, I can't complain a lot about the packs, as it was worth the 10-12 bucks, as that's what the the packs sell for individually and are still fairly new, so it was okay.  The turnoffs for me though was I would expect a little more bang for my buck since they were still from last year.  Maybe another pack or maybe switch a Topps pack for an Archives pack, or something.  At least they weren't Triple Play packs.  The biggest complaint though is no protection for the autographed card.  I would be majorly disappointed to get an Aaron Judge autograph and it was dinged to hell.  At worst putting it in a penny sleeve inside a hard sleeve, but for that price maybe put it in a one touch.  The repacks I get at Walmart has many more packs for a buck or two more, but no guarantee of an autograph, but all include a one touch.  I like that risk a lot better.

So, in conclusion, this wasn't a bad box in a pinch, but I doubt I'll get another one.  So that wraps it up for tonight, thanks for reading, and have a great week.  It's supposed to be super hot here, so I don't I do much.  For now I think I'll take a Nyquil dream and cut my losses on the rest of the night.