Early Birthday Bash: I OWN YOU PETE!

So the other day I showed off a set I've wanted for a long time- Daredevil trading cards, and today I thought I'd show off another set I recently bought from Ebay.  It is another one I've wanted for a while, so I was happy when it arrived. 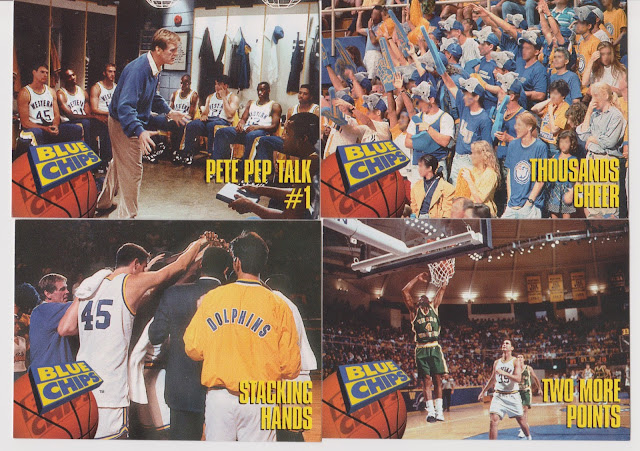 AH GEEZ, I'm talking about Blue Chips aren't I?  I mean of course I am.  Will it ever be placed among the best sports movies ever?  Not likely, but I do like watching it every year or two if I can find it.  It's a movie I don't own, but would like to at some point.  They made this a 90 card set, and I'm glad they did because they did a lot of things right with this set.  Such as showing a lot of scenes from the movie, especially good or important ones (unlike the Daredevil set).

I do wish the shot of the basketball was on the left card, but still.  The point is, they chose the right ones for this set.  I included the right photo because while I don't remember it from the movie (maybe it was an extra), it shows reporter Todd Donoho.  While at the time I didn't know of him, he was an actual sportscaster for KABC in Los Angeles, and like in the movie, he used the phrase "Take a hike".  The reason I was happy to have a card of him though is because after he left the station (heard he was fired), he ended up going to where he graduated from Journalism school- MIZZOU!  I don't know if he still works for Learfield doing the pregame shows, as I can't find anything about him for the last couple years and I haven't listened to pregames in a while, but it was great to hear him on the radio a few times I did.  He also wrote a couple Mizzou books. 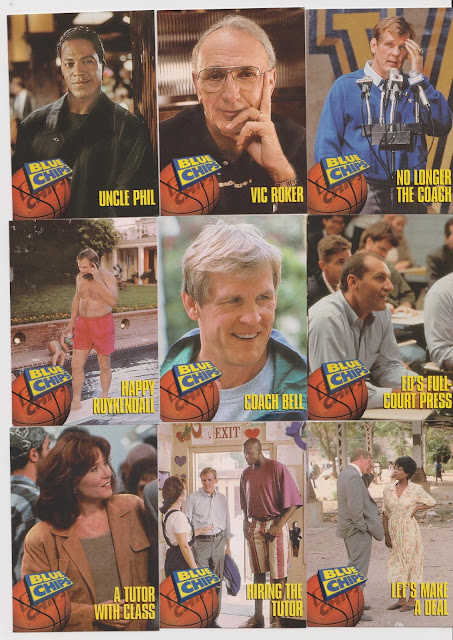 I like how they feature a lot of the main stars on multiple cards.  That is a great center card of Nolte, I must say.  I love the cards with Shaq and Mary McDonnell and there are a few, it just shows the height difference.  I would have preferred a better card for Happy, but it is what it is.  By the way, the title I OWN YOU PETE is a quote from the movie.  Happy says that to Nolte's Pete Bell.  It was a good way to use a line from the movie, and its true. I do own several Pete Bell's now. 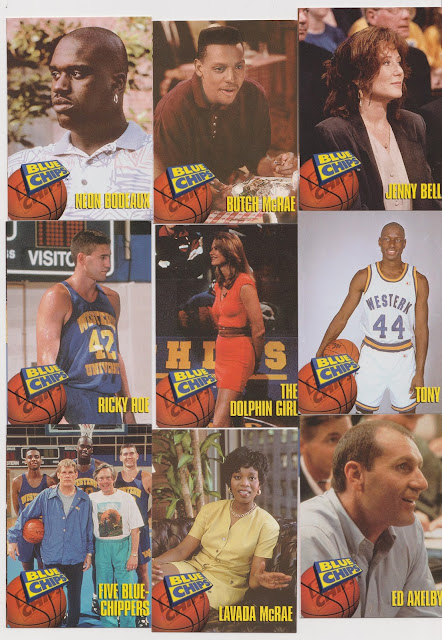 I do think the set did a disservice to Tony though.  I mean I know he was flunking TV, but still, he deserved more respect in this card set.  I also didn't realize the Dolphin Girl was such a crucial part of the movie that she needed two cards.  Though that is part of the problem with this set.  They must not have had much of a budget for these cards, because none of the people with cameos are on cards.  No Larry Bird, no Dick Vitale, nobody famous outside of the main cast.  They don't even have a card for Lou Gosset Jr. who was Butch's high school coach.  That might be forgivable since he isn't even listed in the credits.  However, after looking at the credits, a few famous people did have small parts in the movie.  My favorite is Tony Gonzalez was in the Dolphin suit.  That would be a cool card to have.  Which also I must say a card of the Dolphin mascot would be nice too.  Allan Houston, Rodney Rogers, Matt Painter, Bobby Hurley, Rick Fox, and Chris Mills were some names of players on the other teams.  I think they might sound familiar.

There was another issue with this card set though.  Well besides and oddly thin cardstock. I've seen thicker business cards, but I'll let that slide. 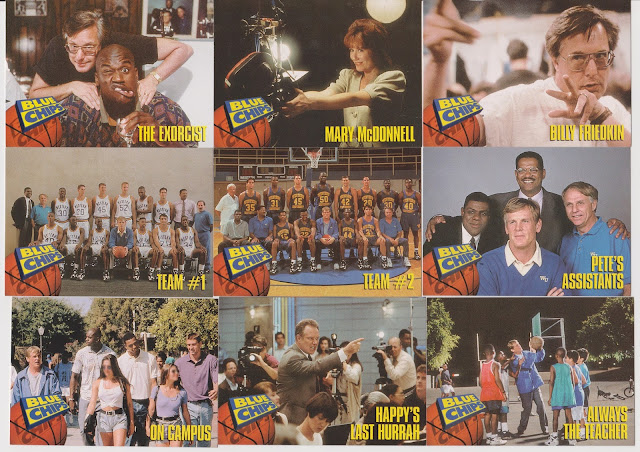 Remember how I said they must not have had a budget for the set?  I mean Robert Wuhl didn't even get a card.  Aside from that, look at the bottom left card.  Extras faces are blurred out on cards!  I've never seen anything like it before.  I would think they wouldn't need permission from extras, but I don't know.  I'm sure a few extra bucks and they would all have been happy.  Even if they blurred the people behind them, this one card irks me a lot.  GIVE THE LADIES A FEW BUCKS TO SHOW THEIR FACES!  Aside from that, I do like the two team photos showing before and after team rosters.  I also like the one of the assistants.  They made some pretty good behind the scene cards as well, I liked the Shaq one.  Mary had a lot more cards than I thought, and it almost seemed like she signed a contract to get more cards.  Aside from Nolte, I think she had the most cards.  The bottom right card I really liked because it shows while Pete quit coaching he never really could give up the game. 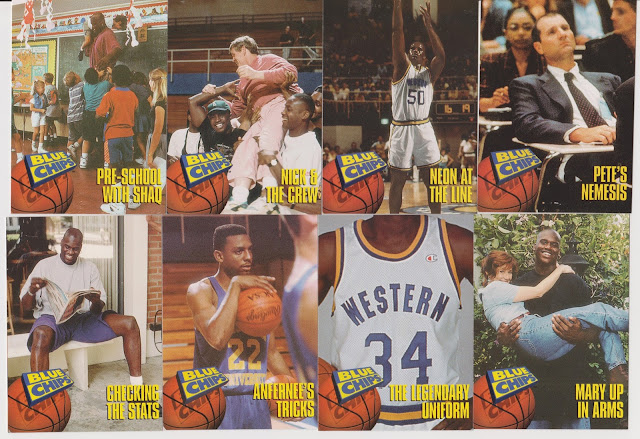 "Hey guys, we couldn't get the money to feature Bobby Knight on a card, or Larry Bird. Or even the Dolphin."

"That's okay, we'll put Mary on more cards, and feature the "LEGENDARY UNIFORM".  So again, no issue with all the love for Mary, but in all my years watching this film, I've never thought their uniforms were LEGENDARY.  They are the most basic uniforms I've ever seen.  If I had to rank tv/movie uniforms, it likely wouldn't make the top 50.

One issue not related to these cards specifically but more from the Trading Card Database, none of the cards with Shaq on them are credited to him.  So the question I might ask later on there is should they?  I would think yes, but if you are a Shaq PC guy, do you really think your set is incomplete without these cards?  We'll see.  I decided to show the checklist cards because most of the cards in the set aren't on the Database yet, so two birds one stone.  Though most of my scans came out crooked so I'll have to likely rescan a lot of them.  Oh well.  Let's look at the backs.

Same cards with the backs.  What is surprising is neither the Paramount or the Skybox logo is on the front of the card.  I also just notice Shaq's logo is on his cards here.  That is kind of cool.  As you can see on the last checklist, there are more than 90 cards, but the first 90 are the base set and that's all I got and really wanted.  One more thing about the back, they use the same photo for the front and back, and that means if a face is blurred on the front, its the same on the back.  Very odd, but oh well.  I do think the non-scene cards could have used other photos for the back or something else.  I don't need the same photo twice.

So overall, I have to admit I was a little disappointed with the set on quite a few levels, but overall I'm still happy I got the set.  It was cheap enough (even without Ebay bucks) that its not money wasted, and I'm glad they are now in my collection.  I'm just glad I didn't buy a box of the cards which I considered once.  I played it safe and got all that I needed.

So that wraps it up for today, I hope you enjoyed these last two posts, and I hope to have a couple more posts up next week.  I've been scanning more stuff lately so it could be good for the site as well.  Speaking of the site, I had an issue with commenting the other day, I think its more of a Firefox thing, but in any event, I might start thinking of a new layout soon.  I was going to wait until the summer, but I might move it up to see if any catch my eye.  I think changing the look every couple years keeps the site fresh, and honestly I'm not in love with the current look like I thought I would.  So anyways, just rambling now, so thanks for reading, have a great weekend, and if you are expecting bad weather, stay safe.