In January, thanks to some Ebay bucks, I managed to get a couple sets of cards I'd had my eyes for a while so today I thought I would show one of the sets off.  In addition I will show a couple other goodies I picked up along the way.  So let's dig in. 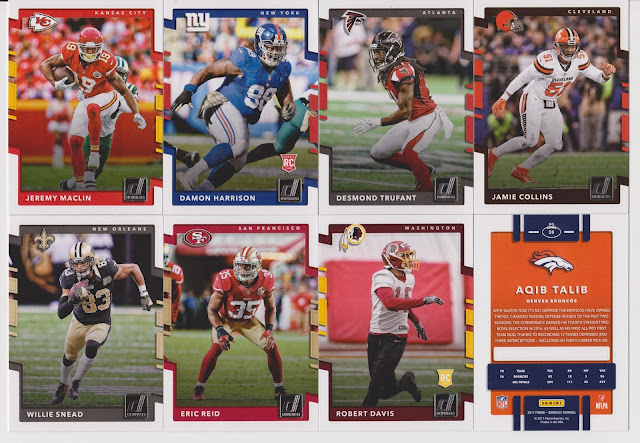 Before I start I wanted to show a couple packs of cards I bought from my local convenience store- Casey's.  I decided to give the NFL a try since they only had 2017 baseball cards and I still don't plan on buying any packs.  So I tried my luck on this pack and was really happy with it.  I got a Jeremy Maclin card which is about the only one I would want.  Overall I like the design of the set, and I think Panini did a good job with this Donruss set.  I decided to show the back of the Talib card because I don't like him, and figured it was a great way to show the back of the card.

So the second pack I think was even a better pack. 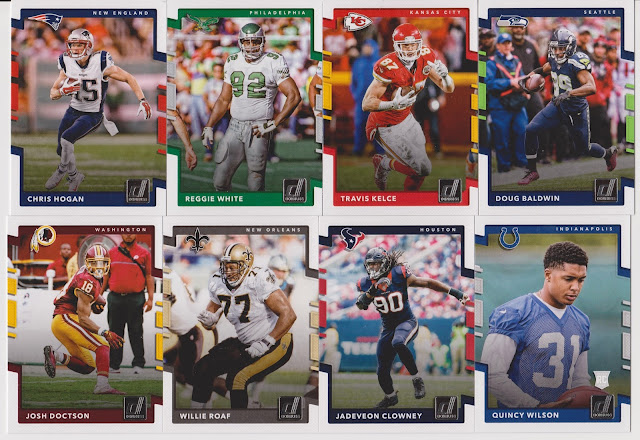 I planned to post these before the Super Bowl, thus the reason a Patriots and Eagles cards are first.  Chris Hogan actually had a good game.  Though the bigger card is the Reggie White.  This card pops!  Sure its not an action shot, but who cares.  I'm not a fan of having tons of legends in current sets, but its not like you see Reggie White cards all the time.  That card made the pack.  However, next card I pulled was a Travis Kelce card, and while I'm not in the market to collect all the Chiefs, I might only have a couple Kelce cards so this was a nice addition.  I doubt I buy anymore packs, but it was fun to open a couple.

Speaking of opening, I got a card in the mail from my sister the other day.  I wasn't expecting it since it was a couple weeks before my birthday but I was pretty happy.  I opened it and it was a birthday card with a cat, which I really liked.  When I opened the card up she wrote it was a combination birthday and Christmas gift since we didn't actually get to meet up for Christmas.  So what did she get me? 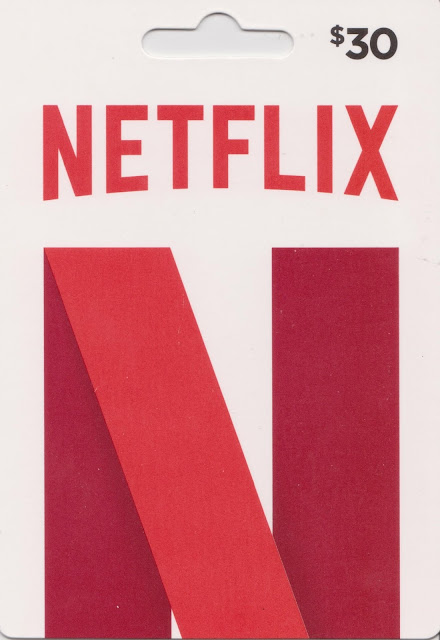 Sweet!  I usually get a free trial around July so I can binge the shows I like for a month, but this should get me about 3 months (using the cheapest option) so it will give me more time to explore.  I will likely wait about a month or two to use it so I can hopefully catch the new seasons of Ozark and Orange is the New Black.  I'm sure I'll find more to watch, and might rewatch some Daredevil and try some of the Marvel shows.  We'll see.

Okay, so now its time to see the first of two sets I bought from Ebay.  I bought them from the same seller, and they arrived a couple days sooner than I expected.

DAREDEVIL!  For those unaware, I was a big fan of the movie, even though I never read the comic books.  The movie released on my birthday in 2003, and I think I just wanted see something on release date.  I never did see it in theaters, but once it came out on DVD, I bought it and really liked it.  A few years ago I discovered that they released a trading card set, and I have had my eye on it since.  I finally pulled the trigger and got it.  I was pleasantly pleased with the design of the cards. 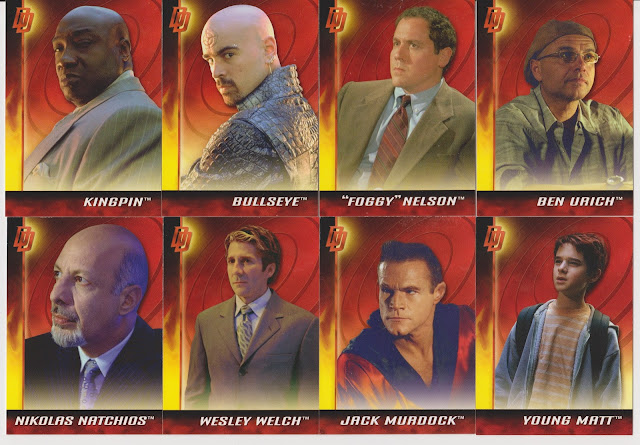 I love how all the cast is featured on the cards, similar to the Transformers set Topps would release later.  The only thing is the cards don't mention the actors names.  Even on the back there is no sign of the actors name.  In fact, I believe only Jennifer Garner and Ben Affleck are mentioned by name on the cards themselves.  Its not a huge complaint, but it would be nice to have the actors names be acknowledged.  I do think that the inserts featured their names, but I only got the base set. 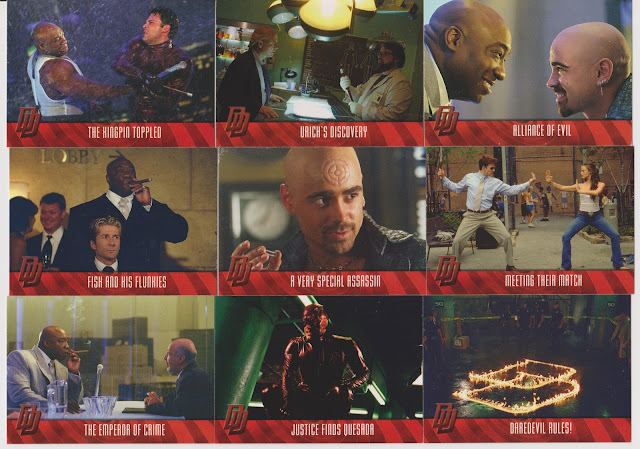 There is some really nice cards showing some great scenes, but I also feel they missed out on some other major ones.  For instance, Daredevil standing over Kingpin who is on his knees which is a major scene to me.  Small complaints, but oh well, I did get a card with Kevin Smith on it, so there's that.

The back of the cards are nice, they talk about the scenes in question.  The Behind the scenes cards give a nice detail about the filming, but as the next scene shows, it takes a bit away from the movie as well. 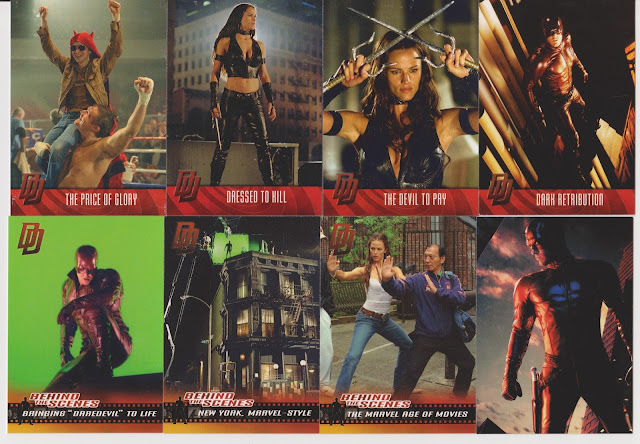 While its obvious they used CGI for a lot of the movie, the bottom two cards showing the green screen took some of the magic of the film away from me.  I have to admit the high rise green screen is kind of cool, but I could still have done without it.

Overall though I wasn't disappointed in the set, and I'm happy its in my collection now.  One day I might try to get some of the autograph cards if I find them cheap, I usually spot the Young Matt Murdock cards around, but I doubt I'll get them.  Since I bought the Director's Cut and still haven't watched it, I think now is a good time to check it out.  I might wait until the 14th to watch it, just so it will be the 15th Anniversary of the release.

Well, that wraps up part one, next time I'll show another set I bought, and might even have another Ebay win I got that same week as well.  Thanks for reading and have a great night.