I got caught up with a few other things, and now the Daytona 500 is getting close to starting so I better knock this out real quick.  Last time I posted some COMC cards I got last Black Friday, and today I'll show the rest.  So let's dig in. 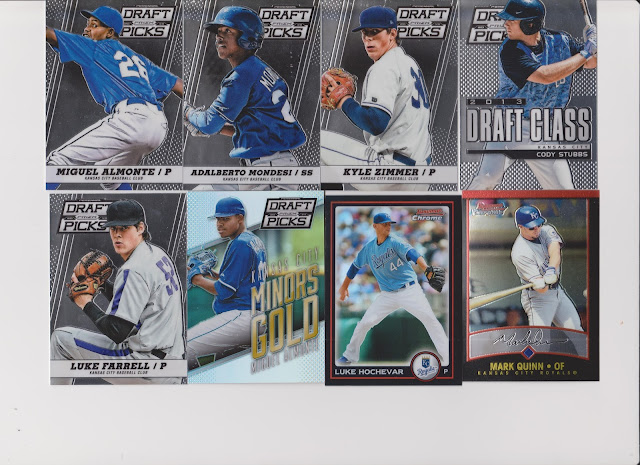 Let's start with shiny.  I've been building up these cards for a while, and good thing too since these look to be the future of the Royals.  I just heard Hosmer signed with the Padres, so a pretty much full on rebuild appears to be on the way.  I usually don't care about getting the Prizm cards but they were cheap enough to just get. 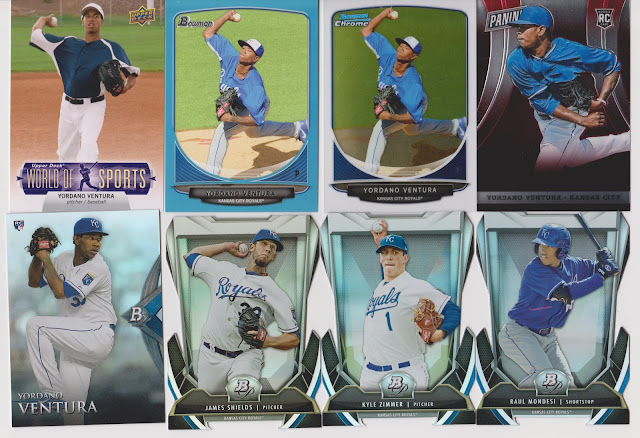 After Yordano Ventura's death last year, I started looking for cards I didn't have of his and stocked up before prices got too high.  It still hurts that he's gone, but knowing I added a few of his cards to my collection eases that pain a bit.  The Bowman Platinum cards I really liked the look of so I added them too. 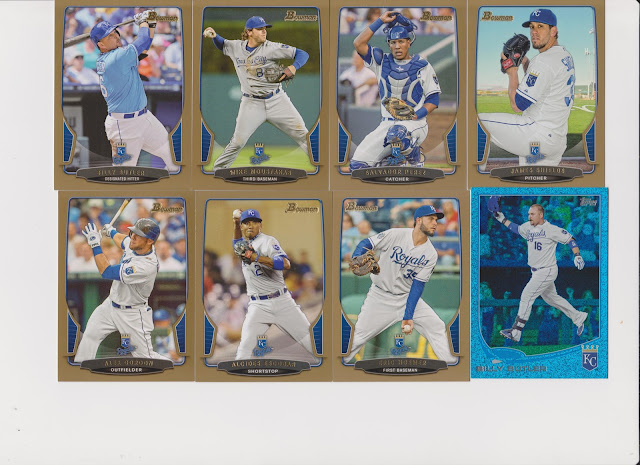 That there is some gold!  I don't try to get too many of the parallels unless I have a card to begin with, so I had a start.  I added these pretty cheap as is the norm, so this helps this collection out a lot.  The Butler at the end is the Blue Sparkle cards from a few years ago which I'm still slowly trying to build but I finally bought this one because it was almost half the price it was normally listed as. 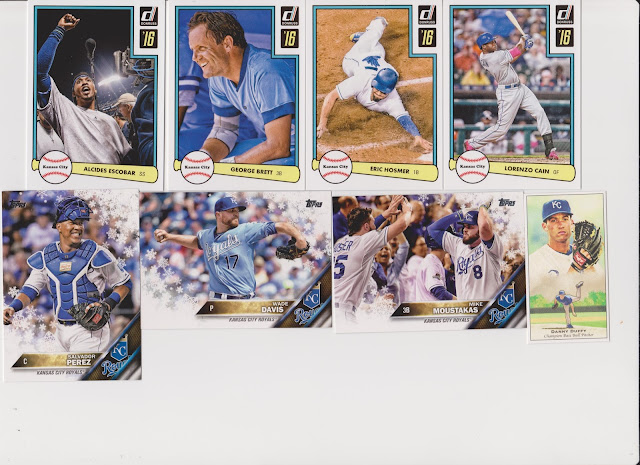 With my 2016 focus mainly on Topps, I didn't spend any time on Donruss, but I did end up with one or two before, so I tried to build the Royals team set so I could finish it.  I do like the look, and I got another George Brett to add to my collection so there's that.  The bottom builds on the Holiday cards from 2016.  I'm not going to build that set, but I think I have the Royals covered now,  I have the checklists updated so its easy to check.  The Duffy card  is the second Royals card I have from that set, and I think that might be it.  There could be one more card too, I'm not sure. 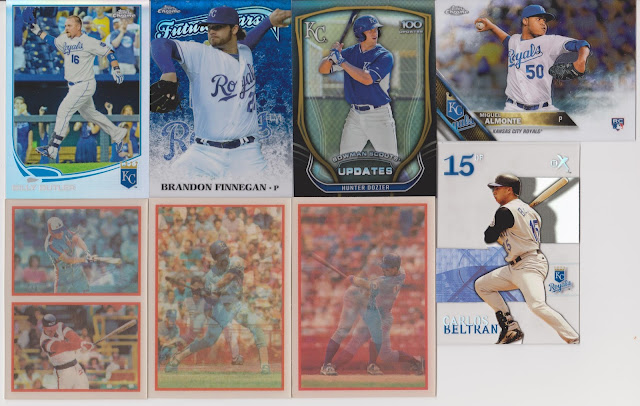 More Royals goodness, now with more Sportflics!  I think that finishes up that set as well.  Be on the lookout for Hunter Dozier this year, he could make a splash.  I was also happy to add a Royals card of Carlos Beltran.  Its nice to find them cheap.  It would be nice if he decides to take a spot on the Royals staff and eases his way into the manager spot.  Ned Yost said he'd manage the beginning of the youth movement, so I'm not sure if he'll stick around more than a year, but Beltran would be perfect to take his place. 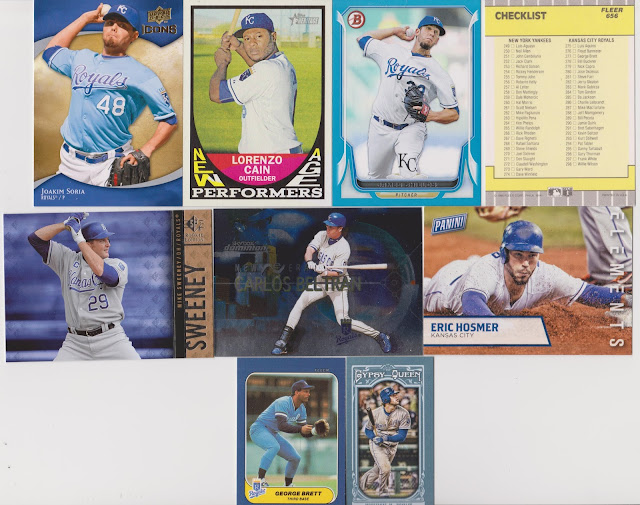 HOLD ME CLOSER TINY ROYAL!  The George Brett mini was the last card I needed from the Fleer minis set, and I'm happy to finish it.  I also was happy to finish (I think) the other Fleer set, which was just the checklist.  I was also happy to add yet another Royals Beltran card.  The others are nice as well, but those are the ones getting love from me right now.  I'm in a rush, Daytona is about to begin. 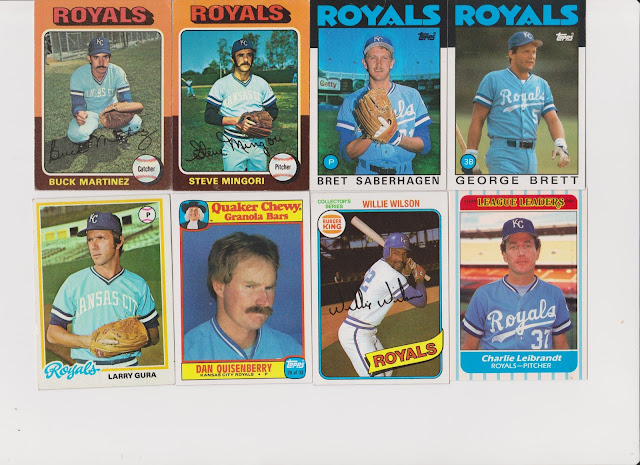 To close out this post, we'll go old school.  Buck Martinez and Steve Mingori are from the 1975 Topps set, and since I already have the George Brett, the rest should be easy to get.  Aside from any other Royals I'm missing from that set, the only other card I may seek out is the Robin Yount Rookie which would look nice on display next to the Brett Rookie.  Next we jump 10 years to 1985, with another George Brett, and another Bret, this one of Saberhagen.  I'm pretty sure those are the main ones in that set, so I should be able to get the rest easily.  Bottom row starts with Larry Gura, and honestly I forgot the year, but I think its an 81.  I have a couple already, but not in a real rush to build it, as I figure I'll get it done at some point.  I was happy to find the Quaker card of Dan Quisenberry as I want to try to get as many of his cards (Royals or otherwise) as possible, and this was one I didn't have.  I like oddball cards anyways, so this was a nice addition.  Speaking of oddballs, its not often you can find a Burger King card, and I'm glad I have one now.  I would like to finish this set sooner than later but also as cheaply as possible.  Lastly is a Charlie Leibrandt and again I forget the year as its not in front of me.  I was too young to see him play for the Royals, but it was still a nice card to add.

Overall I was very pleased with all the additions I made to my collection thanks to COMC and have already started buying more cards which I hope to build up and get around November of this year.  Since I know they are safe, no need to rush them here.  Plus if I get one before then, I could always try to flip the card on there.  So that wraps up my COMC purchases.  It also wraps up this post, which surprisingly I got done before the Daytona 500 started.  I remember it starting much earlier than it does now, but NASCAR and TV are two things that don't seem to mesh well together these days, but that would be a rant I've done too many times.  So thanks everyone for reading and I hope to have another post up sometime this week, but for now I have racing to watch, and some more scanning to do.  Thanks for reading and have a great day.