I will likely open a pack of any type of cards if given the chance.  Especially if they are music related.  I am a big music fan and will listen to almost anything (I've even given Jazz more of a chance in recent years).  I've had music related cards in the past of Yo MTV Raps, and the Procards ones in the early 90's.  I'm not against getting them again at some point, but they never did much for me besides winning a radio contest once because I had a Morrissey card handy.  My favorite radio station at the time (R.I.P. 98.3 The Buzz) would ask trivia questions each day during the lunch hour.  This was around the time the internet was catching on more and more, but I didn't have it on at the time (I think I still had dial up).  Anyways they asked a question about Morrissey and I just happened to have the card close by, and it had the answer on it.  I think it involved on of the albums.  I forgot what I won on that particular contest, as I used to win a lot of radio contests.  That would be a fun blog post to revisit at a future date.

As for now though, we are getting silly.  Silly CD's that is. 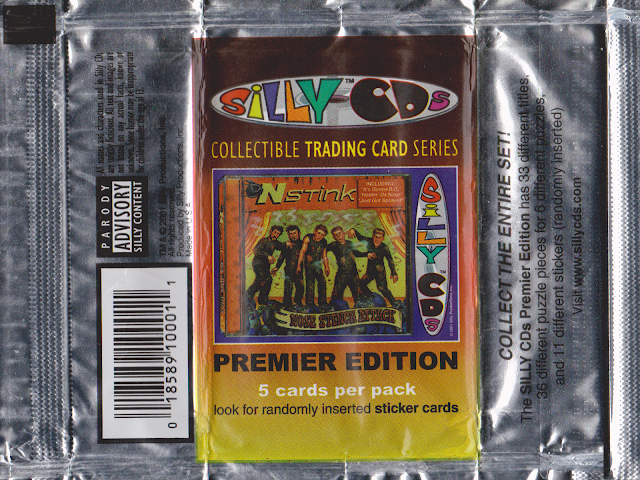 I have heard of these for quite a while but never had any.  It was fun to open once, but even though the base set is 33 cards, I have no intention of getting the complete set.  I was hoping to get Spitney Beers cards (which is of course the parody of Britney Spears), but no dice.  Instead, I did get some ok cards I guess.

I got more cards than the 5 the package indicated at least.  No Britney but I did get Pristina Eggulera.  I was never a fan to be honest, but seeing her getting egged did make me chuckle.  As you can see on the checklist cards, they had a mix of (then) current to older acts.  I will admit I like the R2/D2 one and my favorite might be the No Trout one.  I was a big fan of No Doubt, and the Tragic Kingdom album was their best.  I still have it somewhere, and know most of the words to most of the songs (even ones that never got airplay, which wasn't a lot).

The backs of the cards all looked the same only varying the card number and artist.  It would have been a bit more fun to see better back sides of the cards, maybe showing mock track listing or a biography of the artist, but oh well.

The other two cards (which were puzzle pieces) depicted Carless Suntana (which is kinda dumb), and Nixon Chicks (which was even worse).  I think they could have been a bit more creative.

Sorry I have no more scans, but I did think about if they decided to make a new set and who would be on the cards.  I didn't get very far, and after the names I came up with, I'm not as harsh on them now with their names.  Here is what I came up with.

That's it.  Maybe some of you have better suggestions.  Overall, I like the novelty of these cards, but there wasn't much execution beyond coming up with silly names.  Bland backs that were all the same, and a pretty small base set really doesn't make it worth it to get.  I spent 2000 credits on this pack on Listia, which is more than I should have bid, but I don't regret it.  It was fun to open.  I only bid on it (I did a Get It Now) because it was during a contest Listia was running and I needed to win an auction.  It was the easiest way of doing it.  It did help me accomplish some goals at least so it helped in more ways then one.

Lately Listia credits have skyrocketed and it means less auction wins for me, which I'm okay with, but it does suck that some of the surveys I took before is worth 2x to 5x the credits now.  I'm sitting on around 40,000 credits which depending on when you read this is worth about $6.  I'm not complaining because it was mostly free points, but I think I might start selling stuff so I can get some more points and start winning stuff again.  For now, 1-2 wins a month is fine with me.

Thanks for reading today, and I hope everyone has a Happy New Year.  I should be posting some of my Christmas items soon, and have a few more things to talk about too so I should have a few posts coming.  I also plan to do another MLB Hall of Fame ballot this year since I had fun with it last year.  Have a great day!