What does the Turkey say? Part One

Last month like many others I participated in Black Friday sales on the site COMC.  For those new to my page or never heard of COMC, it is Check Out My Cards.  Its a site where you can buy cards usually at a good price.  This year I was lucky enough to win one of their Facebook contests and got $5 in credit, as well as doing some of their challenges getting more credit, so I had quite a bit more of a budget than I thought I would.  The best part of COMC is you can buy cards at any time, and then wait until special sales periods where the offer free shipping so I took part of that.  In total I got about 30 cards, and while that may not seem like a huge haul, it allowed me to find some cards I was looking for and find some I wasn't aware of.  Today I will show off a few of the cards I got, with the rest being shown at a future date.

A trio of former Mizzou football players.  All three made it to different levels in the NFL.  One made it to the preseason (Michael Sam), one is making his mark as a rookie (Shane Ray), and one is still trying to get his breakout spot (Chase Coffman).  I've never met Chase Coffman I don't think, but I have met Shane Ray and Michael Sam, and both were very nice.  I said Ray would be a bigger NFL star than Michael Sam even before most, but I don't think Sam really got to show what he is capable of.  If you agree or don't with his lifestyle, I think I'd like to see more of what he can do on the field before I would call him an NFL bust.  Plus hey, he was a 7th rounder its a bit hard to be a bust when drafted that low.  None of these cards were on my radar initially, but I liked them and so I got them.  I might have even gotten the Ray card already by the time this shipped, so next year I need to work better on seeing what I have and what I don't.

These were three more cards I didn't initially seek out, but when I saw them I decided to get them.  I'm not much of a fan of the Prizm cards, but the Danario Alexander card was really cheap (I think in the 30 cent range), and it was one I didn't have.  I've met him and got his autograph before and so it was a no-brainer.  I wish he wasn't so plagued with injuries or else he might have been a good weapon for the Rams.  As it is, I'd say his NFL days are over and its a shame, he's a really nice guy.  Maybe he could be a coach somewhere.

The George Seals card I bought back in August I think.  I was going through Mizzou players who played in the NFL, and saw his name.  I searched to see if he had cards, and this one popped up at a pretty decent rate.  I grabbed it, and now I can mark another former player off the list of guys I have a card of.  While I doubt I get every card of every former Mizzou player, having at least one of each would be a nice goal.

i have a few Kellen Winslow cards, but when I saw this one, I knew I would get it sooner or later.  Sooner prevailed as it was within an acceptable range for me, so I nabbed it.  I'm a sucker for patriotic themed cards so seeing this made the decision even easier. 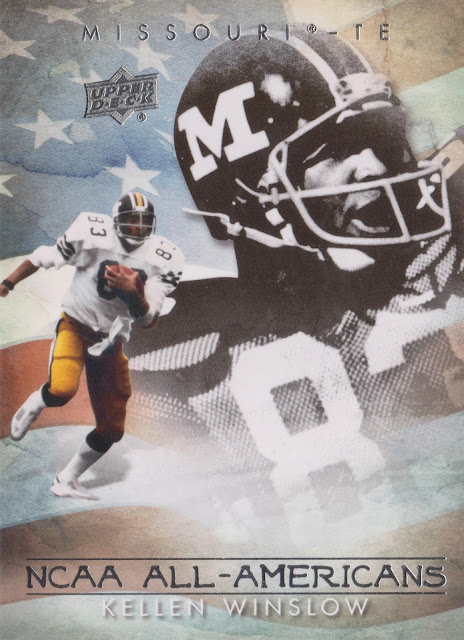 Upper Deck sometimes gets a lot of flack for their cards, and some they deserve, but when they hit, they hit it big.  I wish I knew about this card a lot sooner.  Let's take a look at the back. 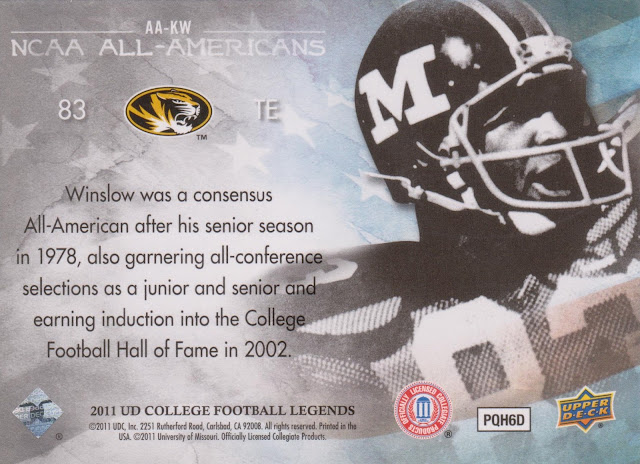 Even the back is nice.  Sure they recycled the photo from the front, but I can't complain about it at all.  This is an all-around great card.

Here is the final batch of cards for today to show off.

Let's start with the John Brown card.  For a long time I've been looking for one of his cards, and finally I found one I liked enough and had the dough for it.  Brown played for Mizzou and is one of the greats I didn't have a card of.  As I said, I've been looking for a while, so when I saw this, I still sat on in for a bit.  I think one or two sold before I decided to buy it though.  I figured he wasn't a real big name and the price might go lower.  I don't think it ever did.

Next to John Brown is Stephen A. Smith... Wait I'm sorry, its Marv Roberts.  I think he bears a good resemblance to the ESPN personality (I refuse to call him a journalist anymore).  The reason I got the card wasn't for his looks though.  Despite not have a post on my other blog for months, I still would like to acquire at least one card of ever team that has called Missouri home.  This card represents the Spirits of St. Louis, the ABA team whose owners made out like bandits after the NBA merger.  I don't think I'll get anymore Spirits cards, so seeing this one cheap I went ahead and got it.  This isn't the only Missouri Sports team I got in this package, but you'll see more on that later. 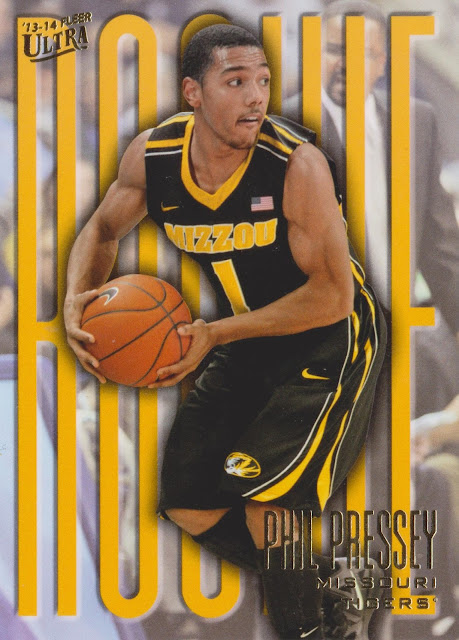 I have one or two of Phil's cards already, but I didn't know he had any representing Mizzou. I like to get the players in Mizzou gear when possible, so when I spotted this I kept an eye on it.  I don't know if I like the giant lettering in the background, but otherwise, I like this Ultra offering. 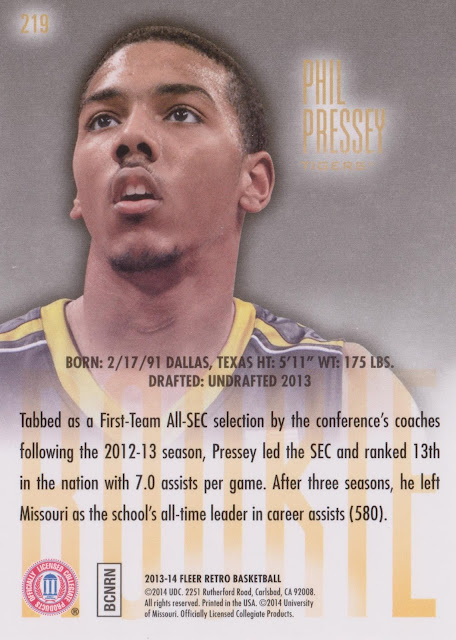 I thought he was starting to show off some of his skills in Boston as a rookie, but it looks like he's bouncing around some now from team to team.  I felt he should have stayed his Senior season (as I usually do for most college players) but also felt he was ready for the NBA.  As I've admitted before, I don't follow the NBA as much as when I was younger, but I hope he's picked up somewhere and makes a name for himself. 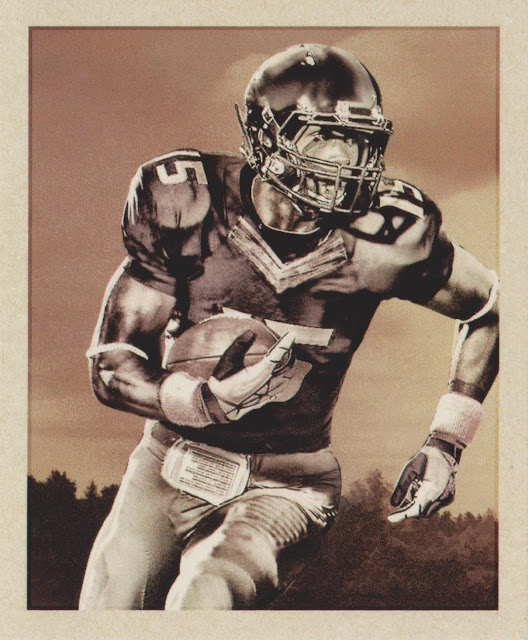 DGB! DGB!  Here's a guy who I don't know where to put in my collection.  He will go in my Mizzou collection as he went to Mizzou, but he's also from Missouri, so he could go into people from Missouri collection.  A few years ago he could fit into my Titans collection (it was mostly filled with Steve McNair and Eddie George cards), but I've dismantled it.  I guess technically he's an Oklahoma Sooner, he never played a down there, so can they really claim him? 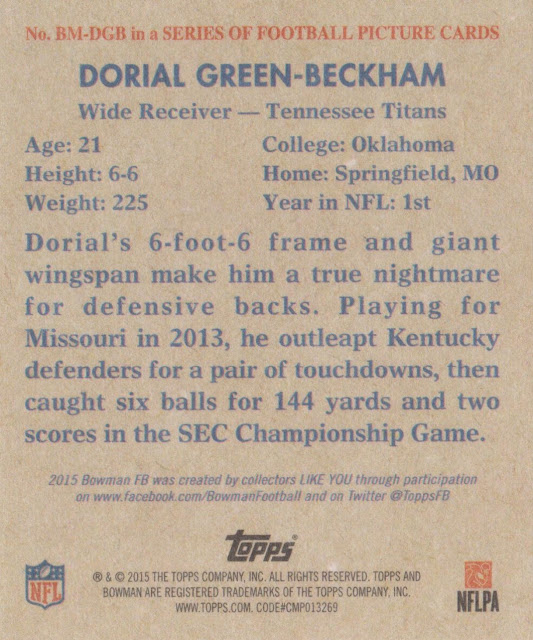 According to Topps I guess they can.  Still not a fan of minis, but this was a decent price.  Especially after his semi-decent rookie campaign.  I won't pretend to be his biggest fan, he is one player I never met while he was at Mizzou, but that doesn't take away from my perception of him.  I just never thought he lived up to the hype that was created for him out of high school.  Add to it his run-ins with the law at Mizzou and I just couldn't hail him as the greatest recruit Mizzou ever got under Pinkel.  Having said all that, I hope he has a long and great career in the NFL, but at the same time I hope he keeps his head screwed on right and matures as he gets older.  I think his maturity is his biggest problem right now.  He has the ability, no doubt.