It's been a long month and it's been quite a while since I scanned some stuff so today I figured I'd clean my desktop off some.  Not a lot of stuff to show but it will knock out a couple folders so that's good enough for me.  Let's dig in. 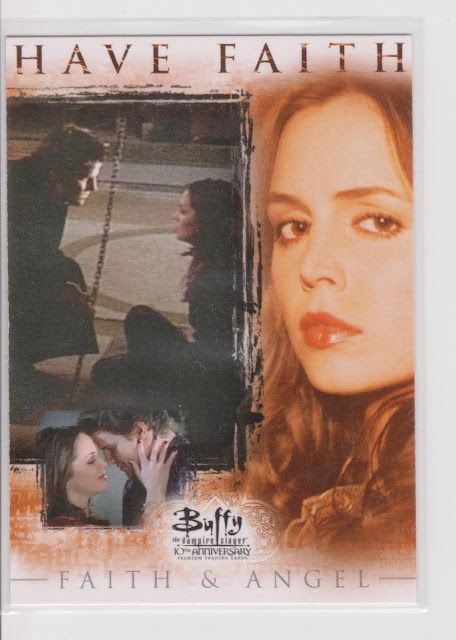 Um, I think I got this on Listia.  I haven't won anything on there in a really long time so I'm not sure.  I still have whatever they call credits but hardly visit the site much anymore.  Once I run out I'll stop going.  I like Eliza Dushku so if I see a random card of hers I'll keep an eye on it. 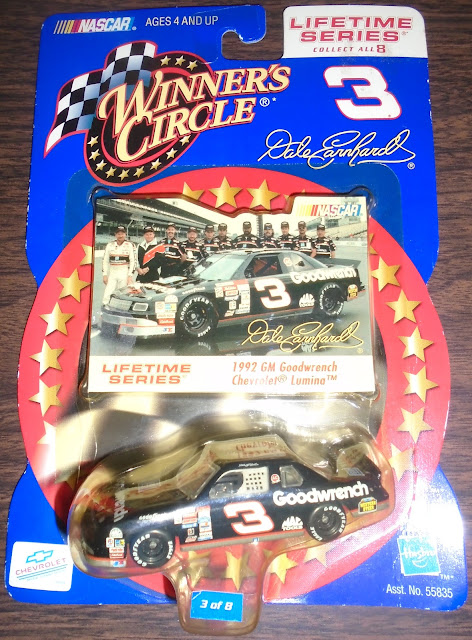 I found this in a box recently while cleaning.  It's a lot more yellow than this picture shows and I'm tempted to open it up.  I remember when I bought this, a few weeks after he died at Daytona back in 2001.  It's rare for me not to open stuff so I'm happy I've kept it sealed this long, but the yellowing is kind of getting to me, and I have a bit of room to display it now.  I can also scan the card in the Trading Card Database if it needs to be, so there's that. 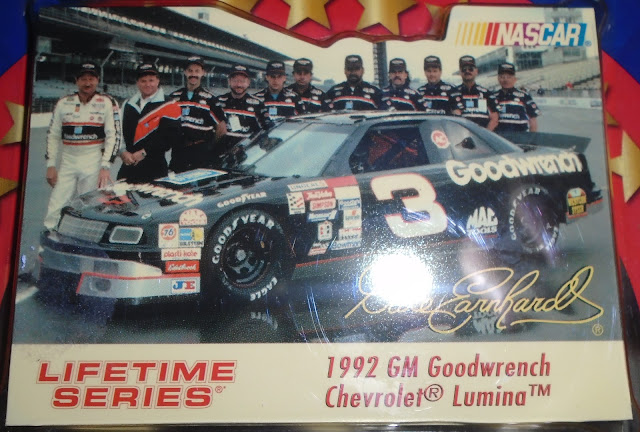 1992 was around the peak time of NASCAR for me, I had really got into it as a kid and there were a lot of names that could win every week.  I also liked the car designs, and to be honest, I liked the "southern roots" NASCAR more than the modern "corporate NASCAR".  Recently I've looked at adding all 8 cars of this set and they aren't priced too bad on Ebay, but its something else I guess I don't really need.

Alright, let's get into baseball cards. 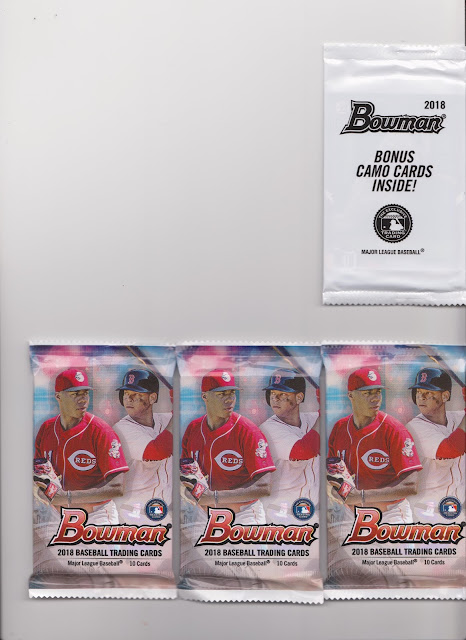 I don't remember when or where I bought these, but my guess is Casey's back around August.  I haven't bought much 2018 product, and honestly not too upset about that.  The appeal to these however was Hunter Greene, as I hope he can be a big star after reading an article about him in Sports Illustrated for Kids.  As for anyone else in the set, I wasn't aware of who they'd be going in, so I wouldn't know most of them likely.  Though being Bowman, I forgot how much I hate their numbering system and how they mix minor league and MLB guys together.  Anyways, let's see what I got. 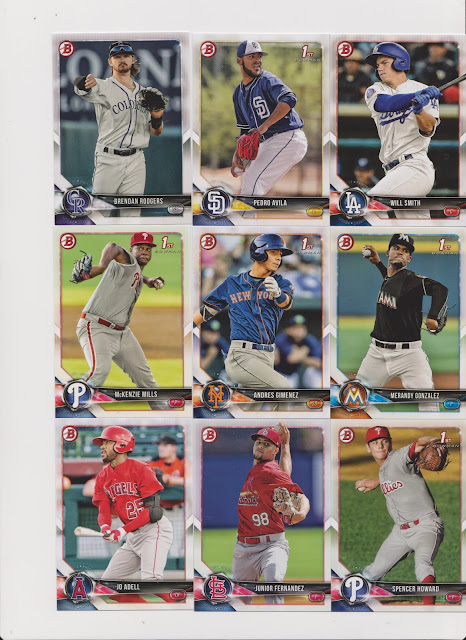 I don't remember which cards came from what pack, and I think I scanned them out of order anyways, but here is some of the cards I got.  I never heard of THAT Will Smith, so I was a taken aback when I saw it.  Nothing stood out to me at the time, and nothing does now.  That might not be a bad thing for now, but hope these guys make it big. 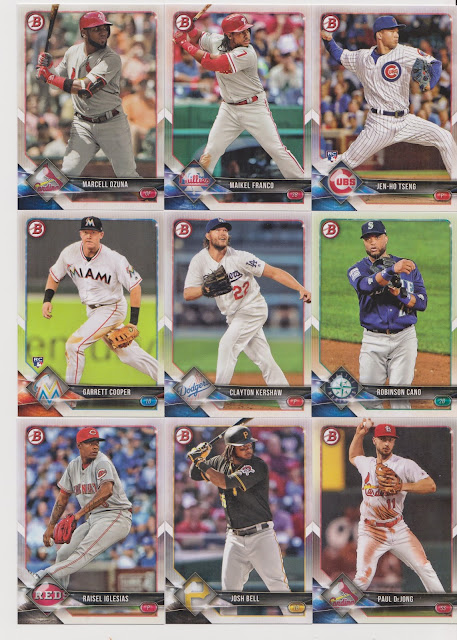 Okay, I've heard of these guys, at least most of them.  BOO Cano!  None of these really fit my PC, but it was nice to find some players I'm familiar with at least.  If any would one day be in my PC, it might be Paul DeJong.  Don't get me wrong, I have some Clayton Kershaw cards now, but I doubt I'd ever make an actual collection for him.  He's a really good pitcher but if I did PC's for every "good player" I'd have 10,000 PC's. 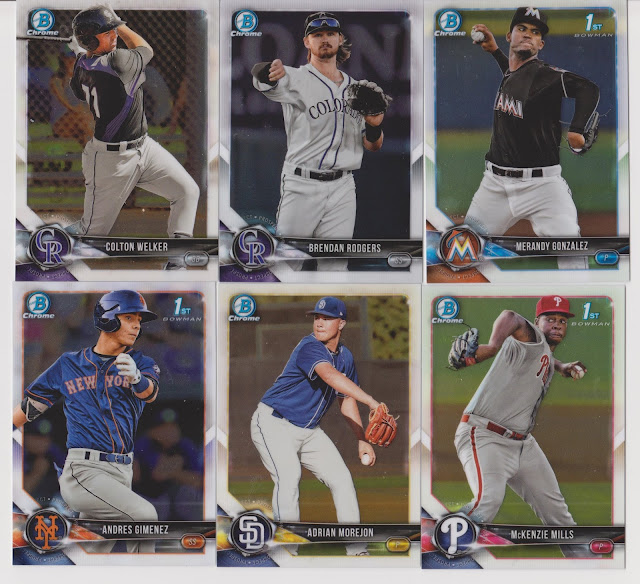 Chrome cards... yawn.  Now I remember why I never buy Bowman.  Are these Bowman Chrome, Bowman Chrome Prospects, WHAT ARE THEY!!!  I've heard of a couple so at least that's good.  At least they could have used different photos of Brendan Rodgers between the regular Bowman (or Bowman Prospect or whatever it was in the first scan) and this Chrome card.  Maybe they spend too much time with the numbering of the cards to have time to find different photos. 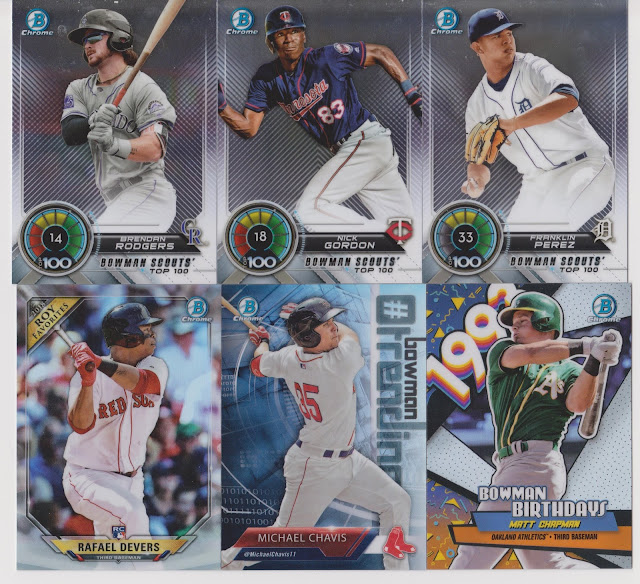 Here's some names I'm familiar with at least.  Granted I don't watch as much baseball as I used to, but I've heard of half of these guys before I opened these packs, and yet another Brendan Rodgers.  At least card had a different photo.  The best card so far is likely the Rafael Devers card.

So far I've noticed no Royals which is a bit upsetting, but I'm use to it by now.  Also why I don't miss buying so much new product.  Welp, one pack left, the bonus pack.  Not sure what appeal it has, but let's look at them.

Eh, to me it looks more like grass on the field than camo, but I have to admit, I actually like the border.  Never been big on the whole camo thing for cards (or jerseys... especially you Padres), but these seem to work.  What doesn't work is no Royals found in the pack, and no Hunter Greene.  Not even a Hunter Greene in Camo Green.  I can't say it was money wasted, as I enjoyed opening them, but it may not have been money well spent.

Well, that clears up a couple folders and that allows me to crop more scans and I still have a ton of stuff to show, including a recent trip to Kansas City, so hopefully I'll be back again sooner rather than later.  As for this post, that pretty much wraps it up.

Thanks everyone for reading, and thank you for keeping on reading even though I'm posting much less than even I anticipated.  I get a kick out of writing them while I'm doing it, but its just getting motivated to start doing them that I don't enjoy.  Oh well, I hope everyone has a great Fall season, and hope it doesn't start snowing too soon.  Lucky so far I haven't heard that word much in these parts yet this year, but I'm sure I will soon.  Have a great weekend.