While I've fallen somewhat behind on showing items I've bought at my favorite local second hand store, I can't say I've bought a lot of stuff as of late.  However I have a couple posts to show of items I've gotten.  This one will focus on my most recent visit about 2-3 weeks ago.  So let's dig in. 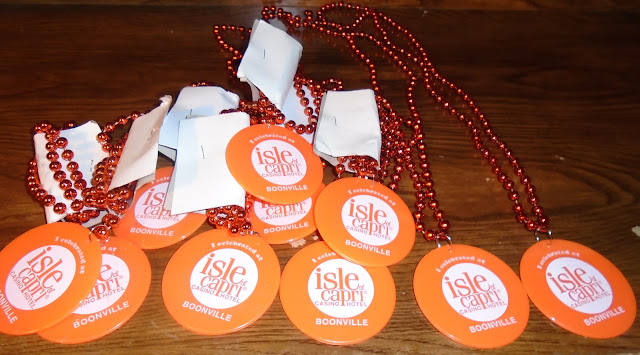 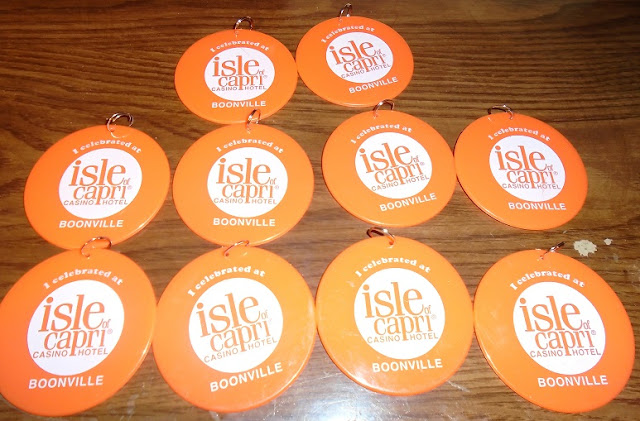 Let's start with something I was going to use for a project.  As some of you may or may not know, I was once a really big fan of the Miami Hurricanes football team.  This was for most of the 90's into the mid 2000's.  I started to lose interest around that time because I was partially burnt out from sports and because I started becoming a fan of Mizzou football.  However, I would still root for Miami if I saw them on TV.  It's been a few years but I've been able to watch most of their games on TV this year and became a fan again.  One thing they have is called the Turnover Chain.  When someone gets a turnover (INT or fumble or whatever) once the play is over, they usually race to the sidelines where someone or they themselves put on this heavy Mr. T like chain around their neck and pose for the crowd.  It's hugely popular and I decided I wanted to make one.  However I'm cheap and don't have the cash for a gold chain so I thought about how to make one.  Then I thought I could use beads.  This store has a ton of these that they basically are two steps away from tossing, so I got 10 orange beads with a casino logo piece on each (which I already took off) for a nickel.  After I got home I couldn't figure out how I wanted to actually make this chain work, and then Miami started losing and I basically lost interest in it.  I still might do something with it though.  I thought about making a Mizzou chain of some sort and dipping these in black and gold paint but I'm not sure.  I just remembered though that the store also had red and green beads so I might make a trip and stock up on some.  They could work well with something else I bought that I'll show in a bit.

When I was a kid, we had something similar to this that we use to put our mail in.  When I spotted this, I figured it was worth getting for nothing else but to remember my childhood.  However the one we had was real heavy, and this is really light made of Aluminum I guess.  Still I'll find some use for it. 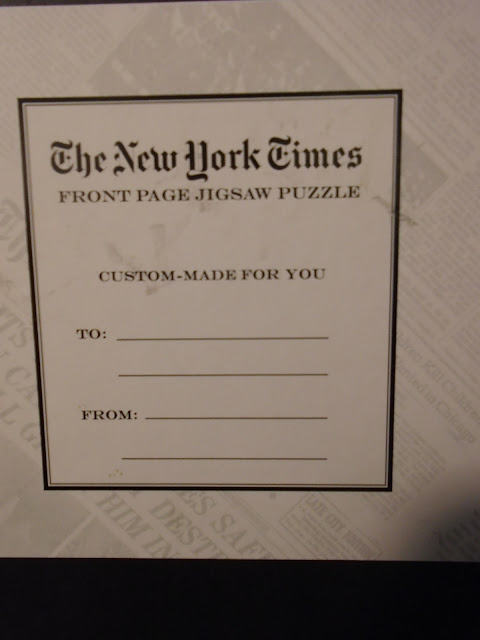 My mom likes puzzles and so this was on the 10 cent table and figured why not.  I forgot what the date was for this puzzle, but I don't think it was a historic one.  Either way a puzzle for 10 cents isn't bad. 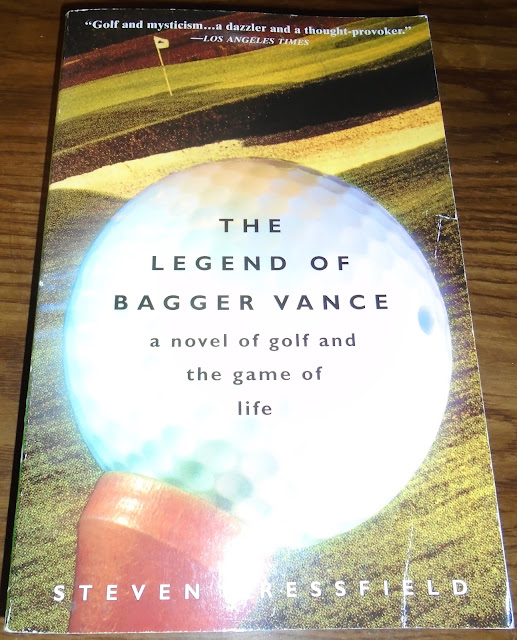 Time for books.  Even though I'll likely never read them.  However when my mom and I go, she usually finds about 5 or 6 and I find a few as well.  It's usually 10 for a quarter or a quarter each so 10 books it is.  This was a last second grab so we could get to 10, but I have to admit I did like the movie of Bagger Vance so maybe one day I'll give this a shot. 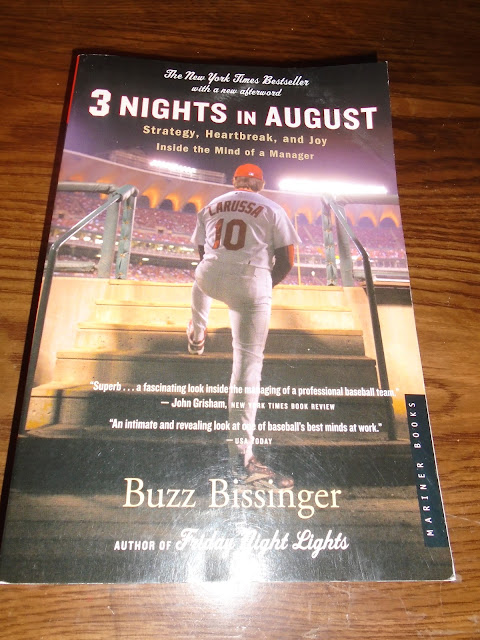 When I saw this book, it was worth grabbing.  I've heard about this book and so I couldn't pass it up.  I might even read it soon.  I was reminded of it just a couple days ago when I saw that it was Darryl Kile's birthday.  His death is mentioned in this book and while I can't remember all the details of what this book is about, I still think it will be a good read. 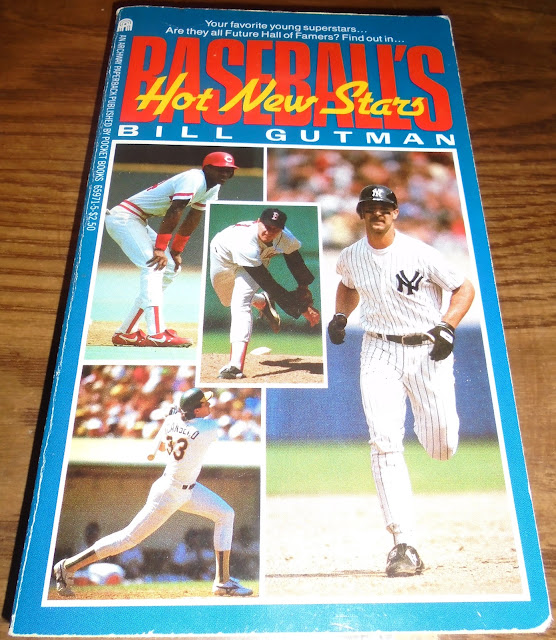 Jose Canseco?  Roger Clemens?  Hottest New Stars?  You know this book is old.  Its still in pretty good shape too I have to admit.  I thumbed through it when I got it but haven't read it just yet.  I don't think there would be too much information about these guys in this book I wouldn't know already, but it could be fun to check out.  I don't think they make books like these anymore but if they did I wonder who they would include.  My guesses would be Mike Trout, Bryce Harper, Aaron Judge and a few more that in a few years we'd laugh at when someone called them a "star".  Not to take anything away from them, but it was always fun revisiting these books to see the hits and misses they made on their selections. 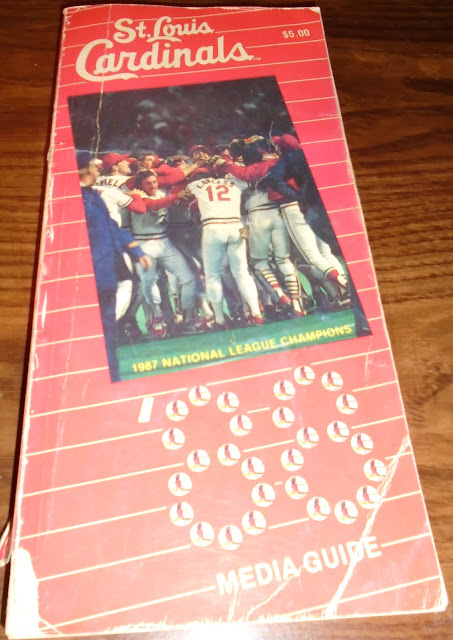 The whole reason I got books at all on this trip was because of this one.  A 1988 St. Louis Cardinals Media Guide.  This book is awesome.  I love the information included in any media guide, but coming off a World Series, I like to see what they include.  I'll never pass up a Media Guide for under a quarter, and this was no exception.  Now if I could find a few more like these.

I got another book but didn't photo it.  It was a kids book that had a bunch of lists and information.  It was pretty cool and I did read that cover to cover already as it had many interesting tidbits in it.  So that was my trip and I think I came out pretty good.

I have a couple more pics to show, this is from a trip I made to Dollar Tree yesterday.  Since they seem to have abandoned sports cards at my local store, I have to find other stuff.  Thanks to a recent blog post on Dino Drac, I found something I had to get.

I seriously bought a Christmas Tree for a buck at Dollar Tree.  It is 18 inches high, but to be honest, we don't have guests over much, so this is the perfect size tree.  It included the base as well, and its pretty much ready to go out of the box. 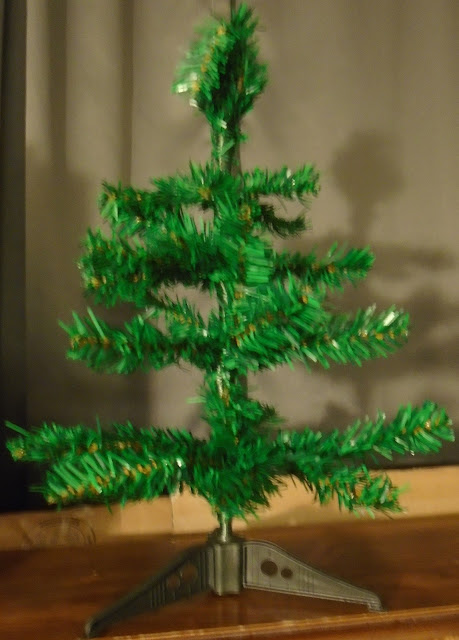 Some may think its a cheap way to celebrate the holidays, but I don't care.  In fact, it sits perfectly on top of my desk and its in front of the window as well.  Now I may have to go back to Savvy Seconds to see if they have any green or red beads and I can decorate this up quite nicely.  I had other reasons to go to Dollar Tree and I made a trip to Walmart so its not like I went out of my way just for this, but I'm glad I got it.

So that wraps things up for today.  I have another Savvy post that I might have up this week that is from a few months ago and features all cards.  It should be fun to look back at since I have slightly forgotten what all I did get on that trip.  We'll see I guess.  Anyways thanks for reading and have a great week.  If your area is getting hit with this cold spell, I hope you're all safe.  I know I'll be safe inside, staying warm by the Christmas tree.  Too bad Dollar Tree doesn't sell fireplaces.  Oh well.

P.S.  Since getting my new computer and starting to organize a bit, you might see a few minor changes to my site.  Nothing big but I might consolidate some of the categories up top to make it easier to navigate.  I thought about doing a redesign, but that might be months away.  For now these are just small things to help me and you see what I have and don't.