My posts have been few and far between, and when I have posted they have been a lot of musical posts.  Sorry about that, but today is another musical edition.  I took a bit of a break from blogging and collecting as of late, but I had my reasons.  However, things are starting to look up and I might get back into all of it soon.  Nothing bad has happened, I was just in a funk.  Though I was having computer issues, but I managed to find a good laptop on Black Friday so I was able to upgrade.  Since then I've had to move all my stuff to the new computer and figure out my favorite sites again, and figure out where the new computer put all the apps and programs I use.  Luckily, most of what I use is still working, and I even managed to finish some custom cards I will show later.  With my computer issues out of the way, my next step is a big one.

Beginning soon I will once again wipe out my collection on here and Trading Card Database.  The reason is two fold.  First because this year I really fell behind on what I have and I need to figure it out.  The second reason is because in order to do that, I needed more organize better.  My plan was to get a couple 3200 count boxes or maybe a couple 5000 count boxes so I could expand my Royals collection, then also get rid of my binders to save space.  After a rough estimate, I figured I'd need almost 2 boxes just for the binders alone.  So since Ebay was nice to give me bonus Ebay bucks a couple days lately, I managed to snag 5 boxes holding a total of 25000 cards.  More than enough for the binders and my Royals collection, as well as my Mizzou collection and even my Related To Missouri collection and completed sets.  Then I can more easily sort my excess cards and figure out what to do with them.  I'm waiting to figure out the best way to separate the cards in the boxes (I used index cards but didn't like them), and once I figure it out, I should start soon.  I'm thinking using craft stick would be good as dividers and much cheaper than other alternatives.

When I start doing that, I will wipe out my two accounts on Trading Card Database.  One will be used only for set building and complete sets (my second account), and my main account will be for Royals, Mizzou and whatever randomness I collect.  It will make it easier to sort since some cards I know I have but not sure if they are in my sets or in my collections.  Now if I get doubles I can include them in both.  I'm hoping to start this massive project by the first of the year.

Having said all that, I have been hesitant to sorting any new cards I've gotten lately, but today I did decided to scan some cards.  I scanned a lot of stuff this year I never got around to, so maybe next year I will show it.  Today's cards though all have a theme of music.  So let's get into it. 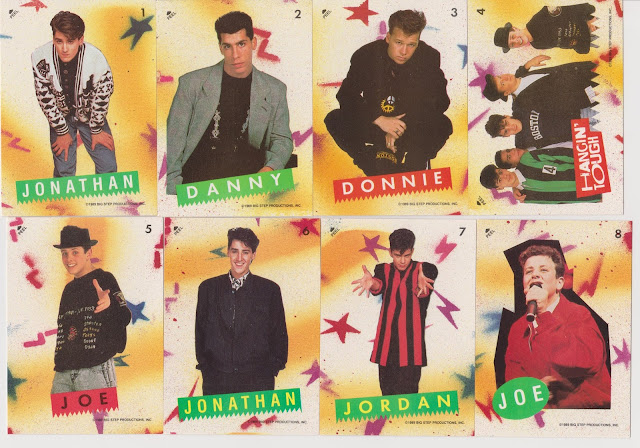 Really?  I bought New Kids On The Block stickers?  The answer is yes.  Though I had my reasons, unfortunately I ordered the wrong ones.  Now you may ask "How does one order the wrong NKOTB stickers, and is there really a RIGHT NKOTB sticker set?"  The answer is yes to having the right ones, and I didn't do due diligence on ordering the right ones.  While I've been away, in the back of my mind has been a sticker project I wanted to work on.  I don't want to give too much away right now since its still in the planning phase, but I needed a couple New Kids stickers.  I didn't need the whole set, just one of the group, I think one of Donnie, and most importantly, one of Joey.  I really thought the last one shown is the one I needed. When I got these, I realized it was the wrong one.  There are two sticker sets, and it appears I need the yellow version instead of the red version.  Now the question is do I want to go through the hassle or just say screw it, this one will do.  I haven't decided yet. 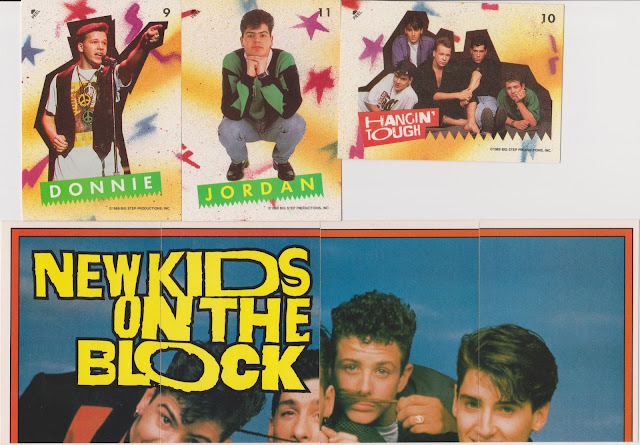 The good news though is that this is a complete sticker set and it was cheap.  I even got bonus ebay bucks for them, so I didn't lose much on it.  Once I feature this project I mentioned, I'll decide if I will break this set up or go ahead and get the right cards.

I had a specific reason for these stickers, but even if I didn't, its still pretty cool to have some trading cards of boy bands.  New Kids got cards.  Backstreet Boys got cards.  I think One Direction got cards.  But you know who DIDN'T get cards? 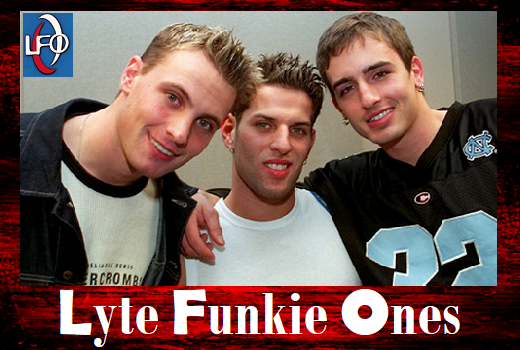 The Lyte Funkie Ones!  That's right LFO never got trading cards.  So for the first (and likely only time ever) I created LFO trading cards.  I had my reasons for it which I will mention in a moment, but look at the rest of the 5 card set I created.  I should mention I haven't created cards in over 6 months to a year and these seemed kind of rushed, so once I get back in the habit, the quality should improve. 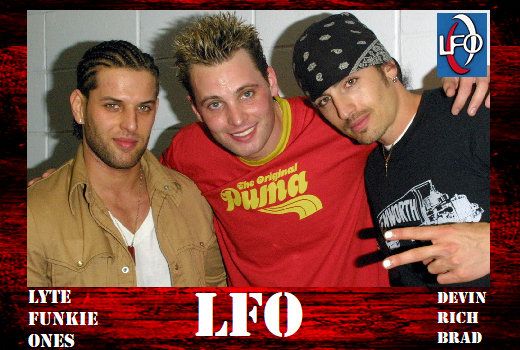 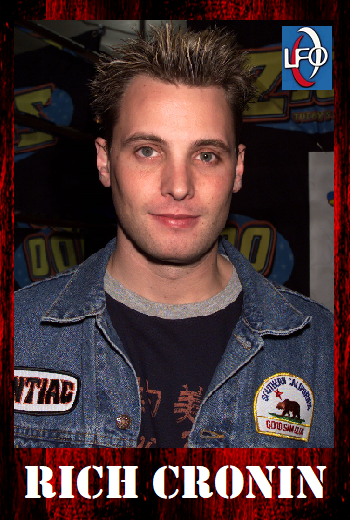 Summer Girls is one of my favorite songs ever.  I know its not a songwriters masterpiece, but it was a teenage pop song that hit when I was a teenager.  It bordered on novelty and for those who didn't take it serious appreciated it more.  The lead singer of LFO was Rich Cronin.  I love how on the first card he is wearing an Abercrombie & Fitch shirt.  You'll get it if you listened to the song Summer Girls.  Sadly, a few years ago Rich Cronin died from a stroke as a result of leukemia at the age of 36.  It was really a shame as I had hoped one day they would return for at least one more album. 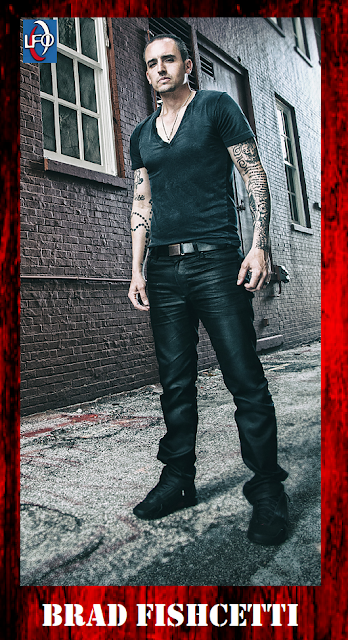 Rich and Brad were original members of the band.  Brian Gillis was also in the band, but left just before they hit it big.  After the death of Rich, Brad and Devin decided on a couple occasions to go on tour together.  Today Brad among other things is a pro-life activist.

*Side note, this card is really bad, but I liked this photo so I used it.  Since its not a real card, I don't care all that much. 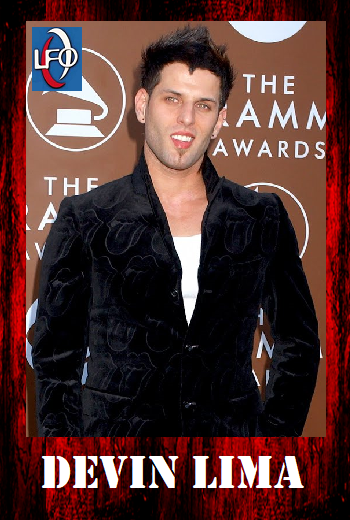 Devin Lima joined the band just before they hit it big and has been the driving force behind the band after Rich's illness and death.

The reason I made these cards is because of Devin.  After a short tour this summer, Devin announced he has stage 4 adrenal cancer.  He turned 40 years old this year, and it really struck me upon hearing this news.  Two thirds of the band have/had a form of cancer way too early in life.  My sister had stage 4 cancer, and a friend I know also has it, and it really rattles you.  All cancer sucks, but basically if you have stage 4 there isn't a lot you can do but pray and get everything in order.  I hate to sound grim like that, but it is like that.  I hope for peace for Devin and all his family and friends and fans.

So I'm sorry I brought everyone down, I hope I can lift you back up.  Maybe I should get Silly. 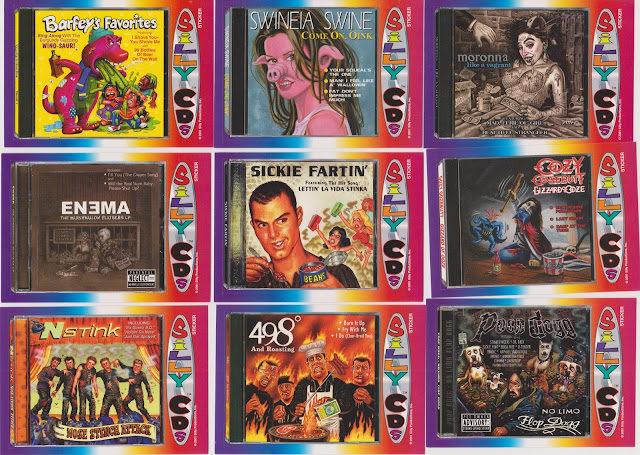 BARFEY?  MORONNA?  NSTINK?  These are some Silly CDs!  Not just that but stickers.  I've seen the cards for this set a lot and got a few off Listia, but I've never seen the stickers.  So when I was still on Ebay, I figured I'd go ahead and get the complete card set and the sticker set was included.  They are basically the same as the cards, but at least I don't have to worry about building it now. 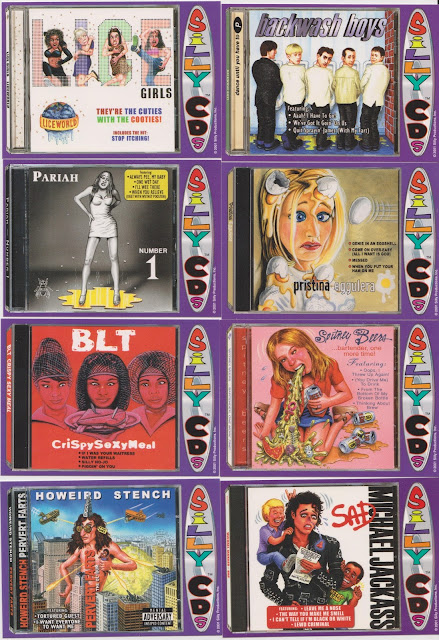 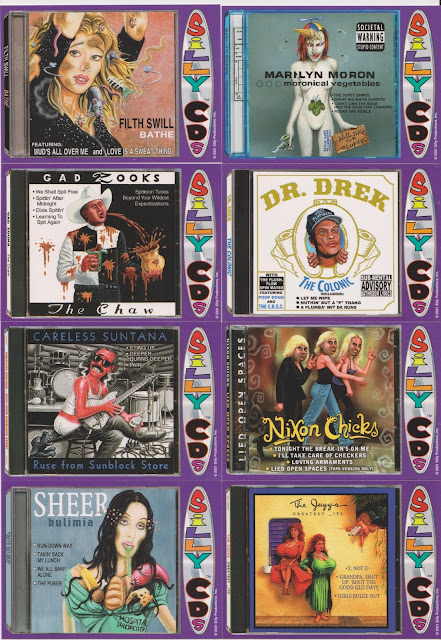 They also made puzzle sets for some of the cards.  I am missing one piece to finish the Santana one, and need 5 of the 6 of the Dixie Chicks.  While I'd like to get the Santana piece, I don't care about the Dixie Chicks one.  If I were to build another puzzle set, it would be the Britney Spears set. 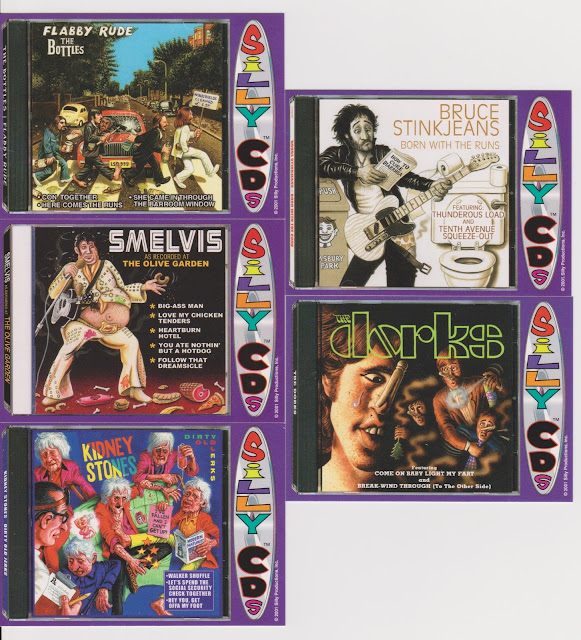 Even classic artists were parodied.  Though these are made as a joke, I think releasing a set of music cards just showing album covers would be a fun set.  The front could be the album cover and the back could be either a bio of the artist or talk about the album.  Maybe both.  This was an easy 35 card set, but it was fun to finish.  While I didn't do much with cards this last half of the year, it did make me enjoy these new cards to my set.

So with that I will wrap it up.  I have a lot to do, but I thought it would be fun to post.  Maybe my next post won't be about music, but who knows.  Maybe I should do a musical post EVERY OTHER TIME...


The good news about all this is I had fun writing this and lately I've come up with ides for blog posts, so it looks like I'm not quite gone from the blogosphere just yet.  Thanks to all for the kind words and I hope everyone has a great holiday season.  Have a great weekend!