I may or may not have mentioned it on here on recent posts, but I decided to transport all my cards from binders to boxes.  I figured I would save space doing it and would be easier sorting the cards instead of moving a bunch around in pages each time I tried to put them in order.  So a couple months ago I decided to look on Ebay for some boxes.  I was helped in this because I got an email for either 8 or 10% Ebay bucks for purchases, so I figured I could make some of it back.  I also found out that Ebay decided to get rid of the $5 rule so even though I might get 2-3 Ebay bucks a period, now it doesn't matter.  So with all that I started looking at some 3200 count boxes.  After looking for a while I saw a 5000 count box for sale.  I thought it might be overkill but then I thought about it.  My Royals collection is starting to overfill the 3200 count box I have now, so I could upgrade to a 5000 count box.  Then I decided to check how many cards I had in my binders.  Maybe 1 5000 count box would work for all of them.  After coming up with a rough estimate I realized I have probably over 6000 cards in binders so I decided I would look into the 5000 count boxes more.  No real deals stood out, but then I found one for 5 boxes, so 25000 cards which would be great for me.  It would allow me to organize a little better cards I hope to someday give out to some bloggers.  So after little deliberation I decided to order them.


When they arrived I figured they would be easy to assemble just like the 800 count boxes I bought last year.  I was wrong.  Luckily though it didn't take long to finish though and the boxes were done.  Since then I have been figuring out just how to organize cards and decided first I pretty much needed to wipe out my collection on Trading Card Database and figure out the best plan of attack.  Since I have two accounts there, I used my secondary account first and wiped out all the cards on there.  Since that time the database has allowed to having multiple collections on the site, but I'm sure I'd mess up and combine them at some point, so I'll do it this way.  So I decided my secondary account, 2ndGenCollector, will now be used for set building and complete sets.  Since those are mostly my secondary focus, it made sense.  My main account, jupiterhill, will be used for all my Royals, Mizzou, and PC cards.  As of yesterday I have emptied that account as well, and I have started adding sets to my secondary account.  I figured if I got them out of the way first, it would make it easier.  I think I'm almost done with most of them, so soon I will move onto the Royals cards.

So it begins.... the long  process of cataloging all my cards yet again, but as a collector I admit I enjoy it.  I'm not sure how long it will take, but I figure it will take quite a while.  The upside is once done, I should know where cards are much easier and can scan cards easier for this blog and for the Trading Card Database.  While I am doing that, I will also be updating my want lists too.  Once I am done with all that which I have a feeling will take quite a long time since I'm in no real hurry, I will probably redesign my site too.  I figure by then it could be summer, and it will be 2 years since my last one, and that was how long between doing it last time.  I think I'll go with a much simpler design next time with less navigation.  Its not rocket science, its just talking about cards, I shouldn't need 55 pages of stuff to go through.

So with that, the fun is about to begin.  I still have stuff to blog about and will post here and there.  In fact I have a COMC order to show and a few other things as well, so I will be around, I just won't likely be posting daily or even weekly.  I am shooting for 2-3 posts a month though and then ease back into 4-6 a month, maybe more but once I finish all my sorting.

So since this has been a long read, I'll show off a pack of cards I bought about 4 months ago on clearance at Walmart.  Not much to say about them, but it was cheap football cards.  At the time I was still collecting them.  However since I've pared down all but just ones I collect and gave the rest to my friend.  He can enjoy them and maybe get his son into collecting too.  Anyways here are the cards.

I forgot what year these were, but glad I got the Duke Johnson.  Though I am not a fan of these cards. 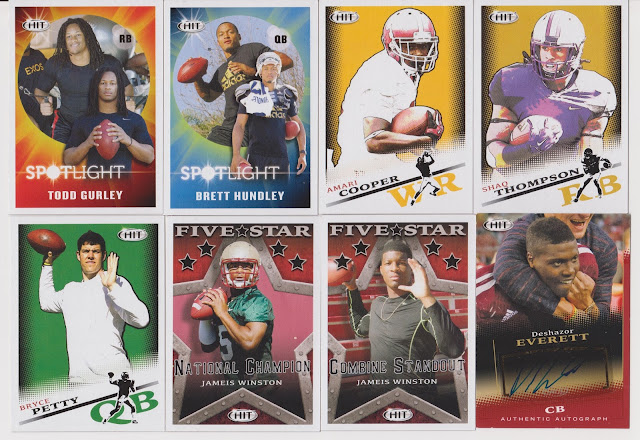 It has been a while since I got actual cardboard cards, not some glossy paper.  Overall not a bad pack I guess with the Gurley (who I collect) and a couple Jameis Winston cards.  I don't think the autograph card was guaranteed in the pack, so that was a pretty sweet bonus.

Here is some more cards.  I can't remember if I bought them that day as well or later. 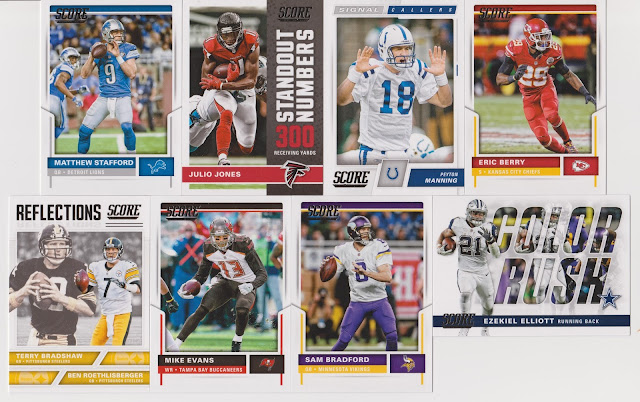 The more I see Score cards, the less I like them.  I loved their 90's baseball designs, but the last decade with Panini, they have been too cookie cutter to me.  Having said that, I was happy with the pack I got, as I can add the Berry card to my collection, and without trying to hard to buy more football cards I don't need, will slowly build an Ezkiel Elliot collection.  If Big Ben wasn't on the Terry Bradshaw card I'd been happier.  Overall though I think I will keep all these cards.

So with all that out of the way, its time to begin my journey into sorting cards again.  I think I am happiest when I'm doing that, so it will be fun.  Thanks for reading and if I don't post again soon, have a happy holiday season.  That's not a war on Christmas, just don't want to not include other holidays.  I'm thinking of having a post or two remembering those we lost this year, but maybe not the the length I did last year.  Anyways have a great day!

Email ThisBlogThis!Share to TwitterShare to FacebookShare to Pinterest
Labels: NFL