As Christmas arrives, my friend already dropped off some great gifts, which I will be showing soon, but I thought I would discuss how much progress I've done with updating my collection in just the last few days.  I decided to shift my focus right now on updating all my Royals cards.  Its what my main collecting focus is on anyways, and would make things much smoother getting it out of the way.  I figured I would work backwards starting with 2017 as I'm more of a right to left type guy anyways.  It has taken a while, but I soon be working on the 2013 cards I have and continue down the line.  It hasn't been too difficult so far, the biggest issues is the numbering of Bowman cards and how Bowman Chrome belong in the Bowman set, and Chrome Prospects go in both, and they make retail versions which are the same cards but different numbers.  I usually do those last so I can take a break afterwords.  Besides that, everything is running smoothly.  As I sort through them in the box, I also update my want lists and what I have.  If you happen to check out my want list (which again is mainly for my use and not a solicitation for cards), you'll notice a lot of blue.  For the 2014-2017 sets, the charts are all blue except where it shows what cards I want.  So basically those years are all updated.  As I write this, 2013 is in all blue, which mean it hasn't been updated and I'm working on it.  As I go down the line, as I work on each year, I will do the same making it easier to know what is updated.  Once finished, I might switch it back to all white, but this will give me an idea on what I've done especially in case I do get cards while I am still updating.  I haven't done the same for completed team sets, but I have started to add spaces between years to make it easier to read.  As usual, if you notice sets that aren't mentioned in either list, it means I have no cards from that set and won't add them until I get at least one card.  It makes it easier for me to see.

Once I reach 2010, the rest of the 2000's should fly right by since it was while I was out of the hobby.  Once I get things organized, it will be a point of focus in the next couple years.  After that, the 90's will take some time as that is where the bulk of my cards are from (as well as the late 80's).  It will be fun to go through them again.  In fact once I get a lot of things out of the way, I'll consider building a few of those sets.  They were childhood sets, and will be great to build again.

So with that update, I figured I'd show some cards.  A few months back I bought a pack of wrestling cards on clearance at Walmart, and now's a good time to show them. 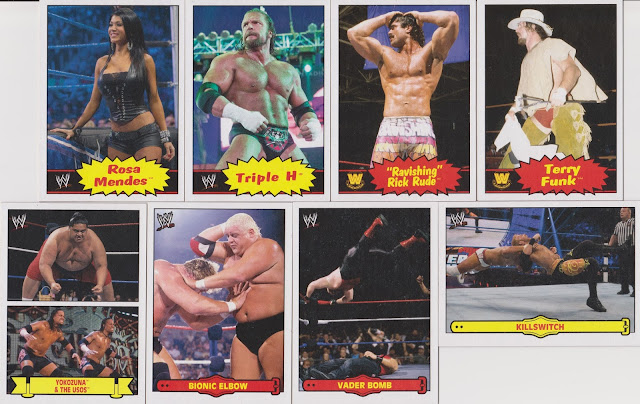 I didn't put too much of a thought into these when I grabbed them, I was just in need of a fix.  When I opened them, I realized it was a set from a few years ago that I was not so open about building.  I have no real desire to finish it, but I was happy it wasn't a terrible looking set.  As for the cards, who could be mad getting Rick Rude, Terry Funk, and Dusty Rhodes cards?  Or Vader?  This was a pretty good pack.  I need to see what cards I have, but I'll do that once I finish working on these Royals cards. 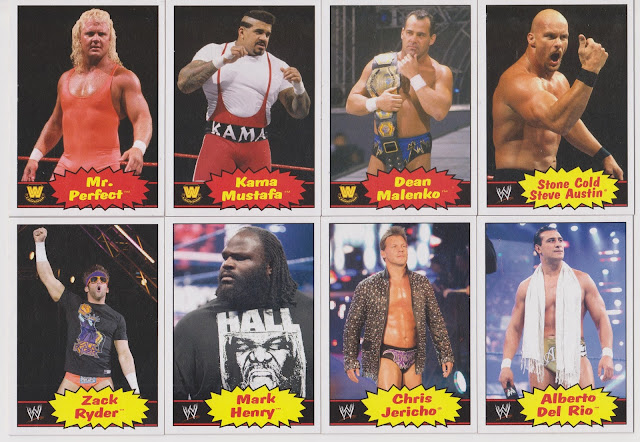 If you said the Mr. Perfect card is my favorite wrestler in this batch you'd be mostly right.  Only Chris Jericho and Dean Malenko makes a good run for his money.  I think if you got into wrestling after 2005, Dean Malenko might be the best wrestler you've never seen before.  Luckily you can see a lot of his matches on WWE Network.  As for these other guys, Mark Henry is another one I like.  I'm not really disappointed in any of the cards I pulled to be honest.  I keep forgetting to look for more each time I go back, but I might next time.

So overall a good pack and I can't complain about them.

Well that wraps it up for today, I need to knock another year or two of Royals cards out so I can get some desk space again.  Thanks everyone for reading and have a great day!