Last weekend my town had city wide garage sales.  Its not very big, so around 15 or so sales.  The plan was to hit them on Saturday.  It just so happened about 10 or more towns in the vicinity also had city wide sales, so I figured I'd hit a few other towns on Friday, then hit mine on Saturday.  The problem was though the weather forecast was really hot, and with a late start it was inching toward 11 before we hit the first sale.  So after about a little more than an hour and 12 or so sales, it was too hot and we called it a day.  The next day a brief heavy rain made us believe most of our towns sales were closed so we didn't even attempt to hit any on Saturday.  All in all, I was okay with hitting a dozen, and hope I get the chance once or twice more this summer.  Having said all that, I have two posts to show.  Today's will show one sale I went to and the cards I found. 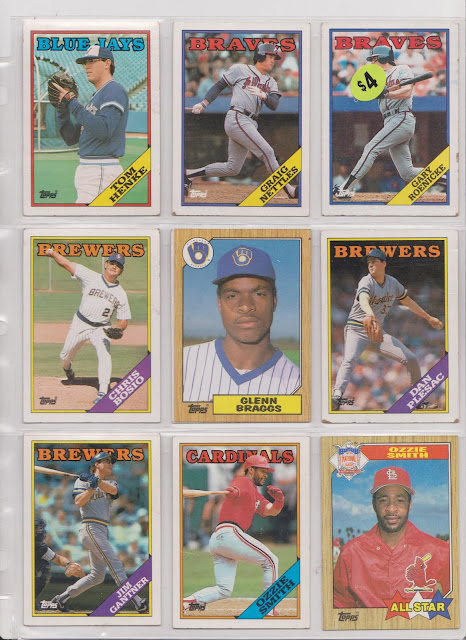 Hidden on a table under some other items, all I saw was the $4 price tag and BRAVES.  I moved the stuff and found some pages of cards and picked them up.  They were all rubber banded together, and I was intrigued.  However I had doubts when looking at the top page.  A couple Ozzie Smith's which I may or may not have, but this reeked of late 80s early 90s "every collector has these" cards.  However on the back I felt something that wasn't a card page.  It felt like paper. 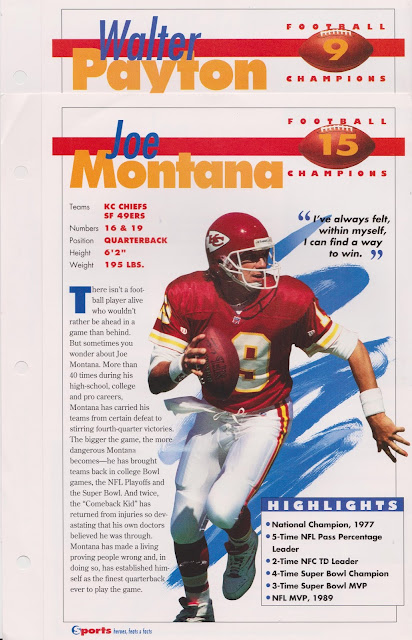 I turned it around and saw that these pages were included as well.  The back page was the Joe Montana page and that made me a little excited.  I remember having these as a kid, and in fact still have the binder I put them in.  I don't know what I ever did with the pages themselves.  I'll show the other included in just a bit.

At this point I had a little bit of hope it was more than just the same run of the mill cards, but still 4 bucks was a bit more than I wanted to pay for a few sheets and some old cards.  So I flipped through a couple more pages of cards. 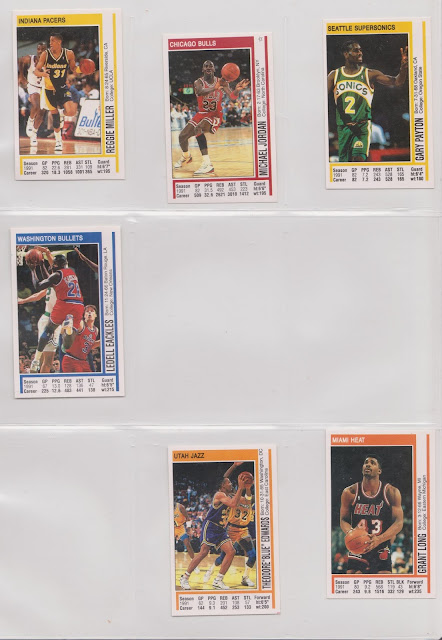 So, all the pages aren't full, but I'll look past that.  However I realize this is pretty much all sports, and these NBA stickers were cool since I didn't really collect them as a kid.  Also being able to add a Reggie Miller and Michael Jordan to my collection would be nice.  Even if they are flimsy stickers, both PC's are in need of any help they can get.  Still at this point, while it was getting better, I wasn't sure 4 bucks was worth it.  So I flipped through another page or two. 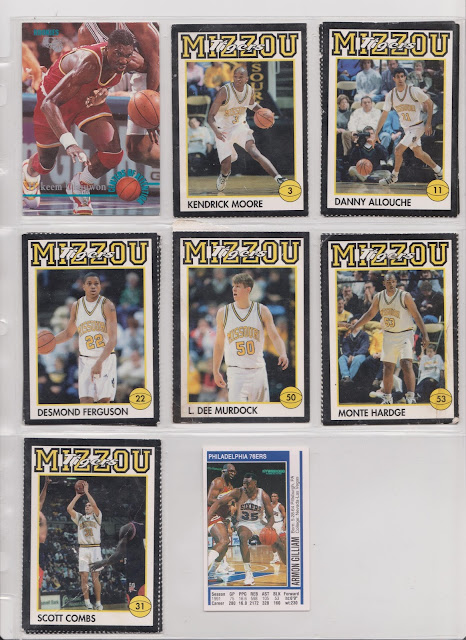 BINGO!  Some Mizzou cards I didn't have and ones I've only ever seen online figured no matter what $4 was worth it to me.  Even as a die hard Mizzou basketball fan I had a hard time remembering any of these guys aside from Monte Hardge.  I noticed there were some cards peeking inside the sleeves too so I was hoping for a full set, but at worst figured they'd be doubles.  They were doubles, but I'm still not mad.  So for 4 bucks I added a wide assortment of cards to my collection.

Here is the rest of the scans I took once I was at home and saw what else was in the collection. 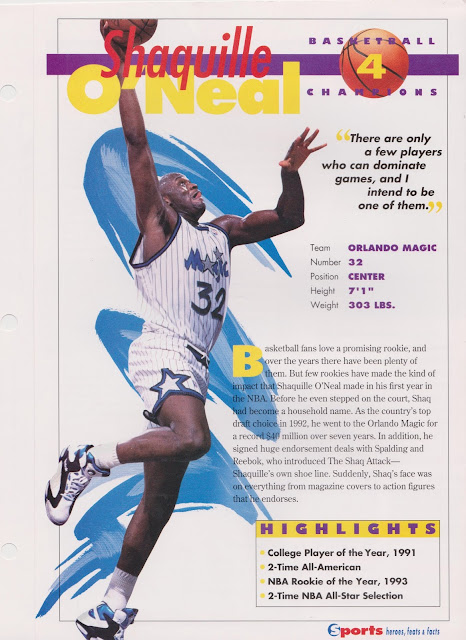 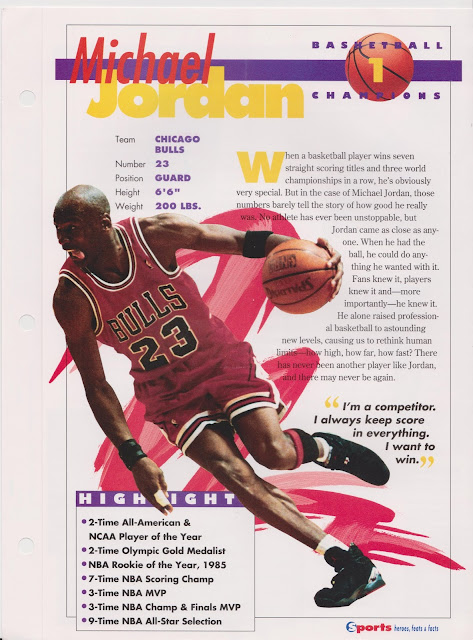 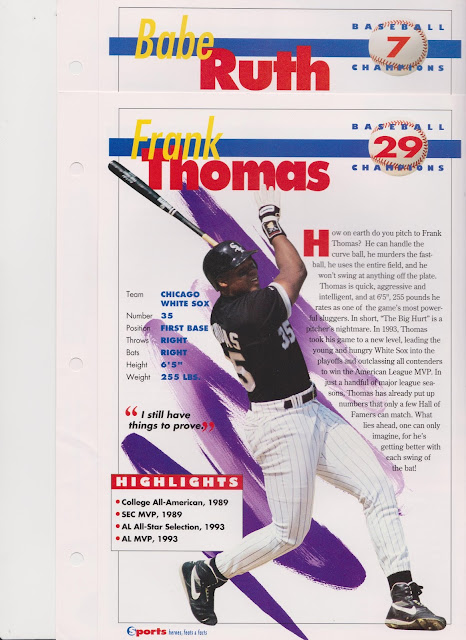 I know Frank Thomas was a big star around the time these came out, but was a bit surprised out of all the players they chose The Big Hurt over the rest of them.  I'd have probably gone with Griffey.  Maybe they had more I can't remember though. 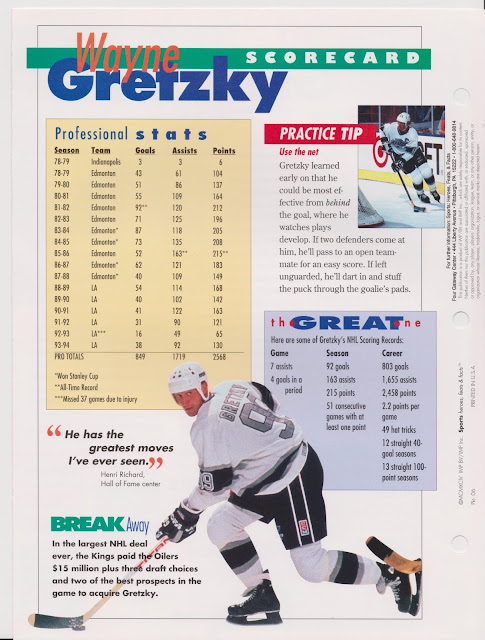 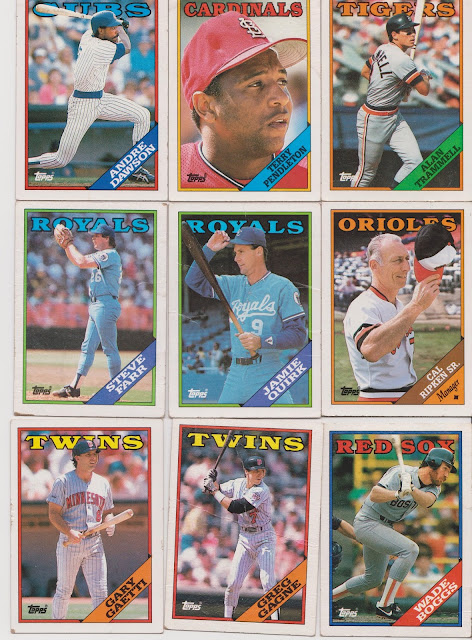 The top cards aren't miscut, I just messed up scanning them.  These cards were well handled, but I'm still not mad about it.  Chances are I have most if not all of these, but getting some Hall of Famers is never a bad thing. 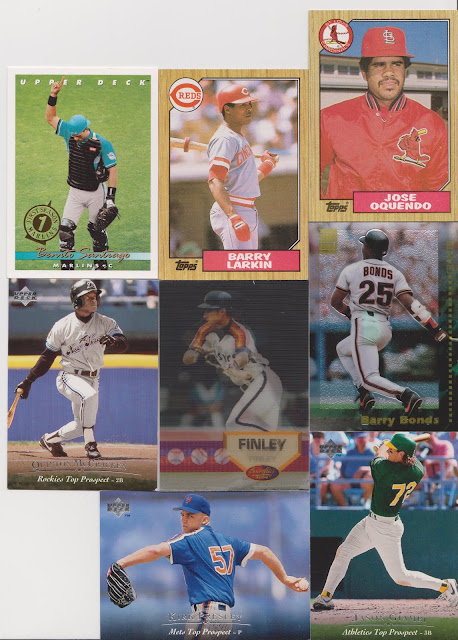 I love those Minor League cards, I remember having the Quinten McCracken and maybe even the Kirk Presley.  The Finley card was nice to get though I might have it already too.  I don't remember having a Marlins card like the Santiago being stamped, so not sure if that was common or if it was a different release, at any rate, I miss the old jerseys, colors, and logos of the FLORIDA MARLINS!  I've always been a big fan of Jose Oquendo, so I was glad to see this card.  Lastly, I was really excited to find that Barry Bonds card.  It will fit nicely in my PC I have of him and I've never seen it before.  Aside from the Mizzou cards, this might be my favorite from all the cards. 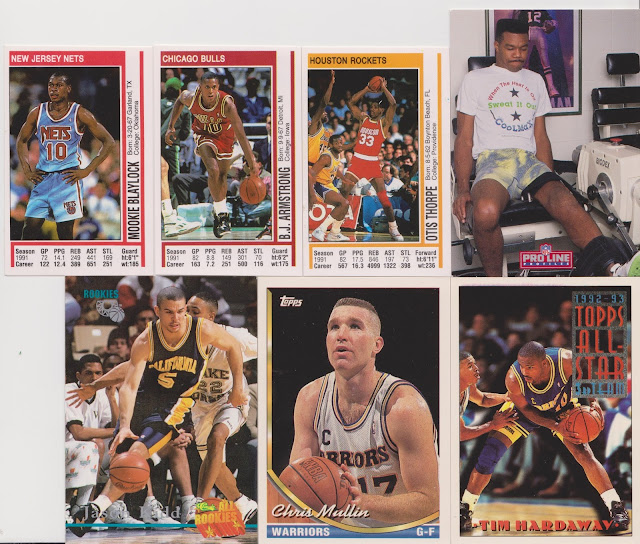 While this was all baseball and basketball, one football card made it in.  A Randall Cunningham card from the odd Pro Line set.  It was kinda fun seeing it as it reminded me of my dad.  Every time he saw Randall Cunningham on TV he would call him crybaby.  I don't know how or why it happened, but I remember him saying "oh, quit showing crybaby" or something similar.  The basketball cards were also nice to find.  More stickers and I forgot the Nets were those jerseys.  I was real happy to find a Chris Mullin card since I don't know if I have any or very few if I do.  Then I looked over and saw that All Rookies card.  After some research I found out it isn't a true rookie card of Jason Kidd, but its still a nice card to find in a collection.

Overall I got about 20 pages and about 130 or so cards and stickers.  So it was under a nickel a card so I can't complain at all.  Especially since I got about half of that Mizzou team set and added a few new cards to add to PC's.

I bought a few other items at the sales too, but no other cards.  Next time I'll show the other stuff I got, and I was pretty happy with the results, especially the very first sale we hit.  All in all, it gave me a spark to hit some more sales this summer.  Even if I don't find cards, just getting out will be fun.  Thanks for reading and have a great week.