Repack Box: Disappointment Until the Last Drop... OR....

Recently I saw a blog post from someone who posted about a $20 box of cards that had a Ohtani card plus 10 packs (and 5 extra packs of Triple Play).  I saw my local Walmart had some for sale and I figured if nothing else, maybe the Ohtani and a couple other cards would make me break even, and I could find a few cards to add to my collection.  Let's see what I got.  I was a little disappointed for the first few packs to be honest. 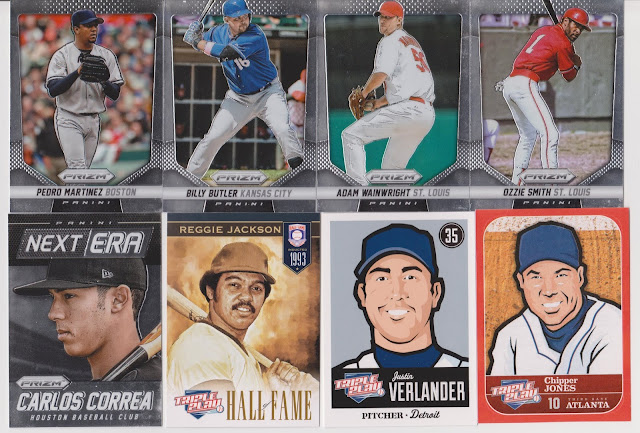 Starting with the 5 packs of Triple Play, I didn't expect anything.  I did get a couple cards I didn't have of A-Rod and Pujols, and the Verlander as well.  The Chipper sticker is new to me, so that was good.  The only thing the set did right was the Hall of Fame cards, and I did get the Reggie Jackson card, so I was quite happy with that.  However, after opening 5 packs of Triple Play, I wanted something better.

Then I opened the Prizm cards.  I actually like these cards, and was glad I got the two packs that came with it.  However both packs felt funny.  Remember opening old wax packs with the gum inside and the gum was in millions of pieces basically dust?  Well that's what these cards felt like.  I'm not sure if they were water damaged at one point or something, but they are off.  After that the thrill seemed gone.  But I did find a few cards I didn't have, even pulling a Royals card I needed.  Ozzie is a new edition as well, and I think Waino and Pedro can fit into my collection nicely.  I also pulled a Carlos Correa card, which I thought was pretty sweet.  Overall the cards I pulled were nice, but the texture of the cards brought my spirits down.  The next packs I opened didn't thrill me much either. 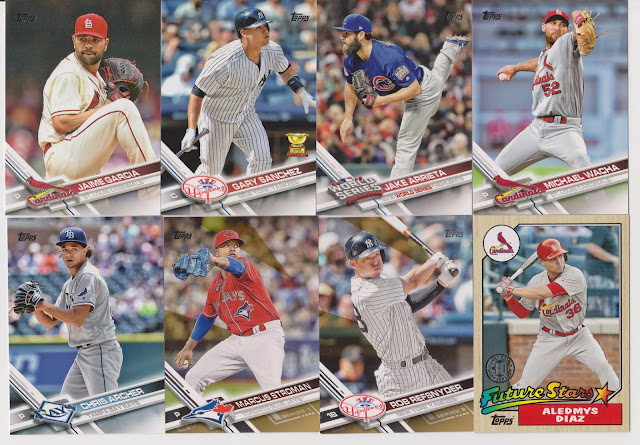 Last year I hated the design of the 2017 Topps set so much that I avoided buying any.  I got three packs in this box, one series one and two series two.  Maybe it was reverse, but still I didn't care all that much.  My biggest gripe was it seemed the logos are stretched way too much on some cards, and other logos are so small.  Plus the design itself doesn't do anything for me.  At least 2018 looks better.  As for the cards I got, I pulled some good players so there's that at least.  Another Garcia and Wacha to add to my collection, and I guess I could start building a Sanchez collection.  I like the Archer card, I'll say that much.  I also got a couple gold cards, which, eh, do nothing for me.  Never really heard of Refsnyder before, so I guess I need to start watching or listening to more games.  The Diaz card is nice too.  I'm not ready to say I like the set, but I couldn't be too upset with what I pulled. 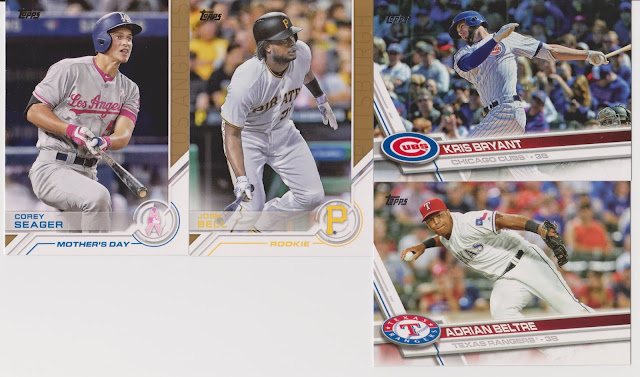 The Mother's Day card looks like the Rookie card.  I'll be honest though, I like that design much more than the base cards.  I was glad to get a Kris Bryant card as he's another I guess I should start building a PC for.  Also glad I got the Beltre card.  I never was a big fan of his, but I don't PC him, and figured I should have a couple of his cards now he has 3,000 hits.  Besides Pujols, I'm not sure when we'll see another player hit 3K.  It might be a while.  I'm probably missing someone though.

At this point I might have miscounted how many packs I got of each.  I think each set is represented in these scans so no big deal.  Anyways, at this point I wasn't too impressed with the box.  The Ohtani card looks like about 4 bucks in value if I tried to sell it, but I figured I'd keep it.  I'd be lucky to get half my money back.  Again, I'm not seeking to get rich on these, but I'd like to get at least equal values when I get these boxes, or at the least a fair amount of cards to add to my collection.

So, let's look at the Ohtani card. 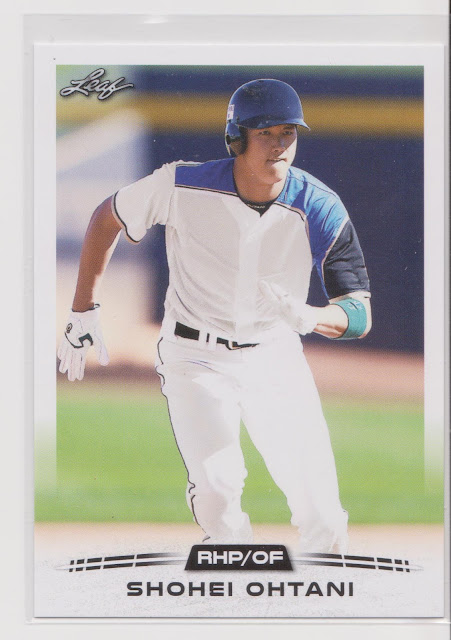 Eh, its a Leaf card.  I didn't expect too much and I already saw the design, so it is what it is.  The card isn't on the Trading Card Database last I checked so I can add it on there.  Its another Ohtani card I can add to my collection, so I'm happy.  It wasn't the reason I bought the box anyways, but I was pleased it wasn't the same 2 I see elsewhere.

So let's open another pack. 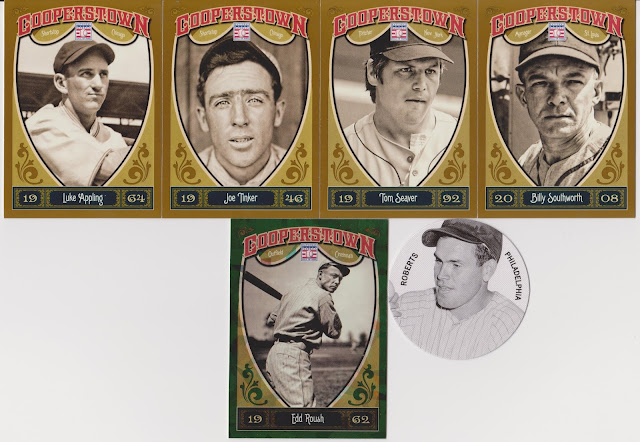 I liked this Cooperstown set, but never saw any for sale so I only get them in boxes like these.  I opened it towards the end because it was a hobby pack and was hoping for something good.  I can't say any of these really fit any PC's I have, but it was nice to get a Seaver and the bottom two cards.  The scan is hard to see but the Edd Roush is a parallel card.  I would call it Green Camoflague, but forgot what the name of it is.  It was a nice pull.  I also like the Roberts card, but still prefer my cards to be square or rectangle in nature.

So with one pack left, another hobby pack, I was ready to admit defeat.  No way I buy another box of these, even if I need a fix.  This box did nothing for me.  But at least I got another Stars and Stripes pack, and a hobby pack at that.  One day I'd like to finish that base set. 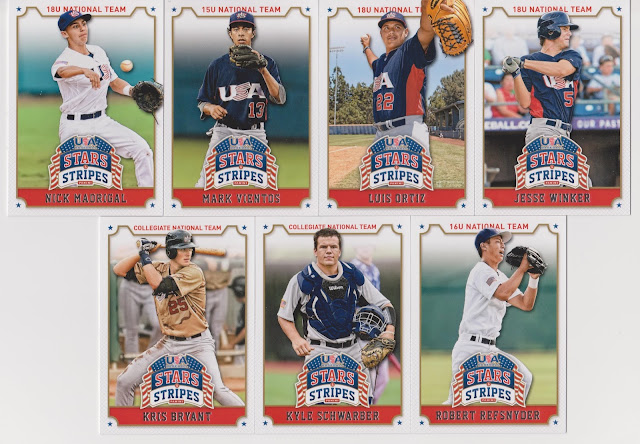 I haven't checked to see what I already have, but this looks like a good pack.  There's another Rob Refsynder card, maybe I should start a PC.  The big thing in this pack was getting the Kris Bryant as he was the guy on the packs, so I felt like that was a victory.  Also getting the Schwarber card and this pack salvaged the box somewhat.  Still not buying another, but it gave me some closure.

Wait though, hobby packs are EIGHT cards to a pack, this is only 7 cards.  I forgot to show one off. 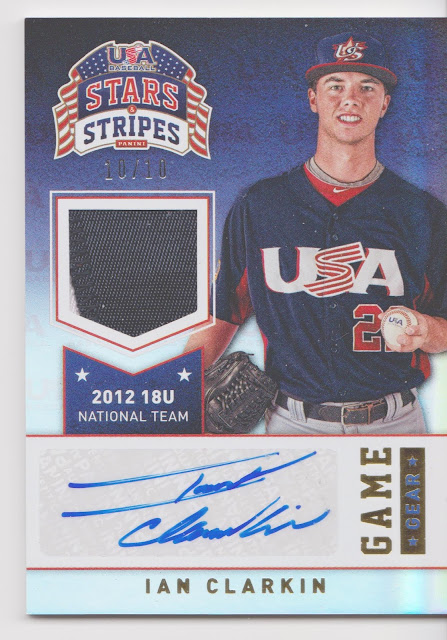 WOWZA!  I can't say I know Ian Clarkin, but this is HUGE!  I pulled an auto card, also a memorabilia card, and on top of that its SN#/10.  AND its 10/10!  Now normally I don't like to make money off cards, but I'm really going to have to consider putting this on Ebay.  It won't make me rich, and chances are I won't make my money back for the box on this one card, but the final card of the box really pulled me to even or maybe ahead.  I can't be mad at all now.  I have to scan this card really good because I can't find the actual card on the Database, as none like it have been scanned yet, but once I do, I might put it up on Ebay.

So this box went from Bust to Breakout thanks to the final card of the final pack.  It felt a little heavy when holding it, so I am surprised it hadn't been picked over before being placed in these boxes, but I guess it shows that you never know what you can find in these boxes.

That wraps it up for today, I should have another blog posted soon but don't hold me to it.  Might even have a couple.  I've been scanning more and should get caught up.  Also in the process of going through cards I should get rid of and might start catalogging them into the database, but we'll see what happens.  Thanks for reading and have a great day.