Tripping Out: WRAP IT UP ALREADY!

The downside of not posting much is when I string out posts over a period of time and then never complete them.  A couple months ago I did two blogs on a trip to Kansas City, yet I left out the part that attracts the most readers: THE CARDS!  So now before I start scanning more cards and posting other stuff I've found in storage its time to wrap it up and show these cards.  There were some good ones. 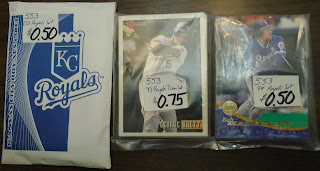 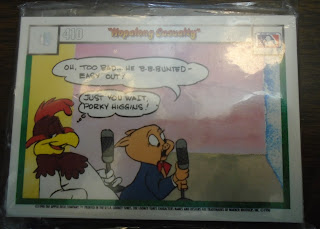 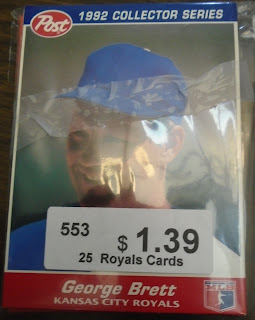 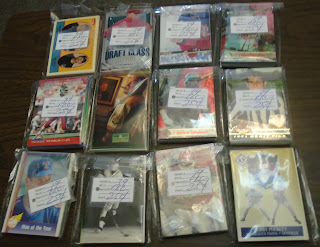 I posted these last time to give you a taste.  I scanned a page for each pack, so let's get Looney first. 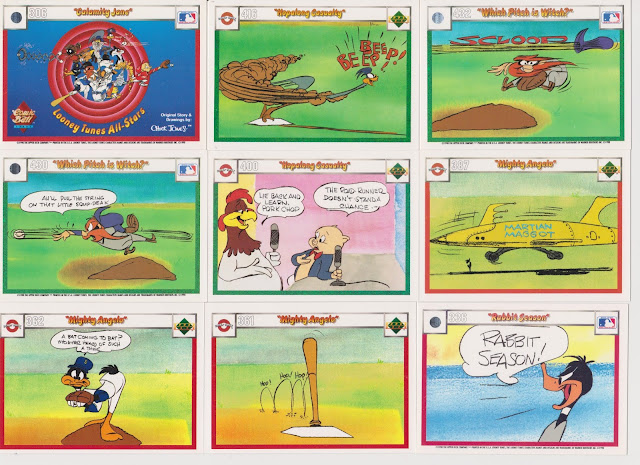 I wanted these when I saw them because it reminded me of Christmas either the first or second year I started collecting.  I got a mesh Christmas stocking with all kinds of random cards, and among them were a bunch of these.  It was fun to look through these again, and maybe one day I'll work on the set, but no rush now. 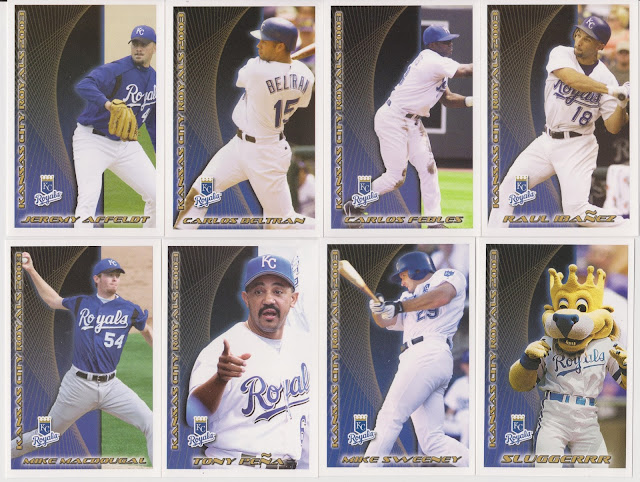 When cheap enough, I'll buy Police sets all day.  Being in the KC area its the best chance to find and buy them.  Since I don't carry a phone with me, I was mostly blind with what I knew I had, but I did make a quick list in case I found some team sets.  I remembered I had 3 KC Police sets already, and knew this wasn't one I had.  Check one more set off I don't need to find. 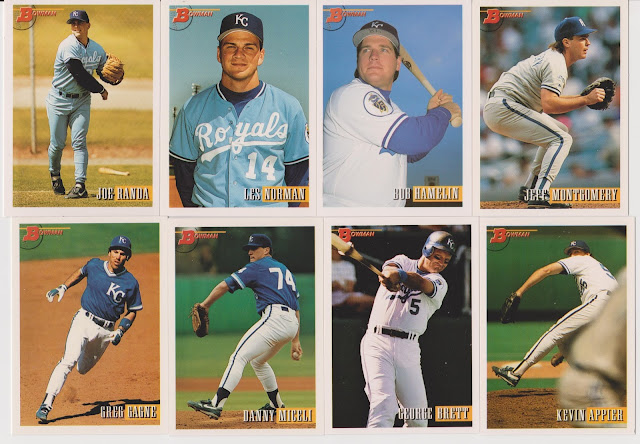 75 cents for a Bowman team set?  Great.... except I think I realized after I got home a couple cards were missing.  Not a big deal, but a little bummed.  I got George Brett, so I got the major card of the set, so it should be easy to finish when I decide to do it. 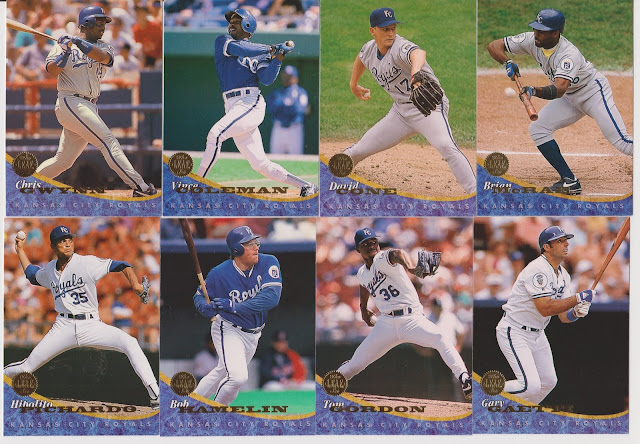 Another team set... and another one that might have been missing a couple cards.  Again, cheap enough to not mind too much.  I knew I had some of these, but getting to get the complete team set was a major point for getting it.  I think between what I had and what was included I did complete it, so I need to check into it.

The next pack was 25 Royals cards.  I knew I was going to find the quarter packs later, but I saw this pack with a George Brett Post Cereal card I didn't have, and $1.39 didn't seem like much of a risk. 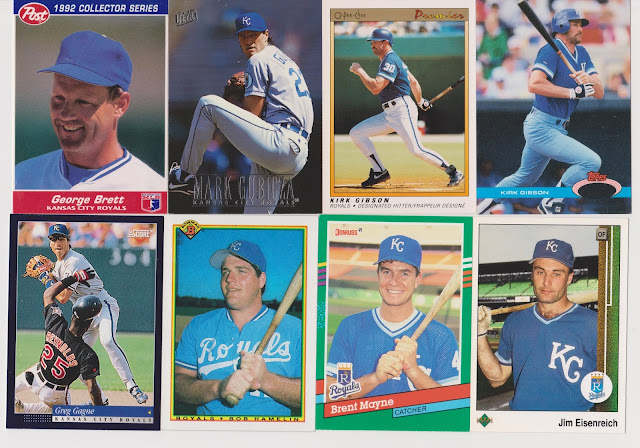 Okay... so the reason I really wanted to go back was the chance to get quarter packs.  While I could have spent more time looking and buying more packs, I bought 12 packs for 3 bucks, and I'm happy with the packs I found. This seemed a bit bait and switch seeing the Pro Set card on top and the rest of the cards from the same set of Score.  However, I'm not mad because I really like that Score set.  I also got cards of some Chiefs as well as Art Monk, Jerry Rice, and Richard Dent.  FOR 25 CENTS! 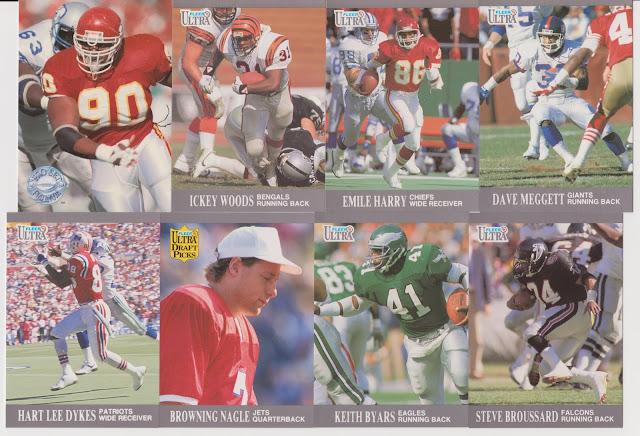 Seemed like another bait and switch, but again, I found a few cards I liked so I can't complain.  I didn't do the Ickey Shuffle finding the Woods card, but I was happy.  I also had Tecmo Super Bowl flashbacks finding the Emile Harry card.  Again 25 cents, no issues. 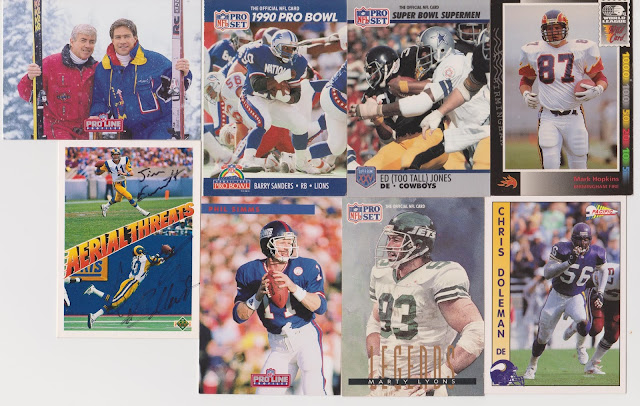 I didn't realize I bought so many football packs until I got home, but oh well.  The cover card was the Pro Line card which looked odd to me being a football card, so that was worth the quarter.  Going through the rest of the cards, I was happy to find a new card to add to my Barry Sanders PC.  I think I pulled my first Ed Too Tall Jones card too.  Then I pulled that Aerial Threats card.  Did I really get an autographed card stuck inside a quarter pack?  I was pretty excited to be honest, but then I noticed in another pack or two that I pulled 2-3 more autographed cards and I realized I was either really lucky or these weren't real.  It would be really cool if I got lucky, but I found those odds to be outstanding.  I tried to compare the signatures but didn't get anywhere, so I figure at worst I have a few cool cards they have a story behind them.  The other cards were Pro Set ones that were "signed" on the back.  Still, a good pack. 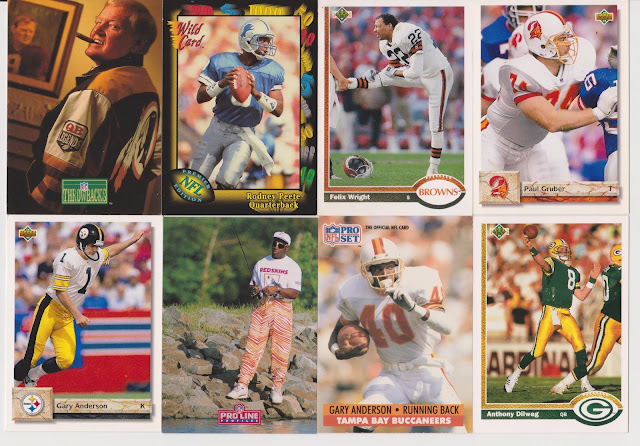 Another football pack, and I was pleased with the variety even if I didn't collect too many of these guys.  Overall I bought 4 football packs for a buck, and I will never complain about that. 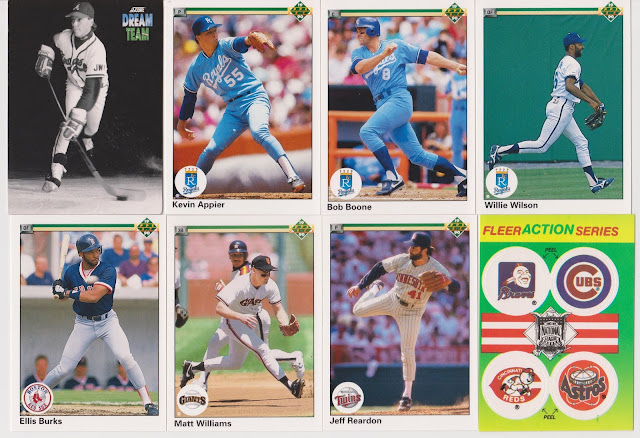 A baseball card disguised as a hockey card?  Sure why not.  Glad I got it for that, but also found a few Royals cards, so that was a great pack.  I think the sticker card was even a bonus card, so that made it better. 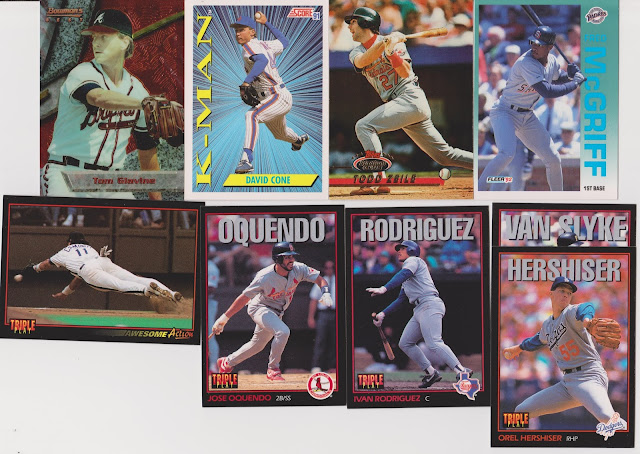 Tom Glavine doesn't really fit into a PC, but I liked that card so I got it.  I was glad I did since the 92 Fleer of McGriff was included as well as all those Triple Play cards.  While basic, that is what the newer Triple Play cards should look like.  Though to be honest among the three years the Triple Play cards came out in the 90's this was my least favorite set.  Still its one I would chase one day. 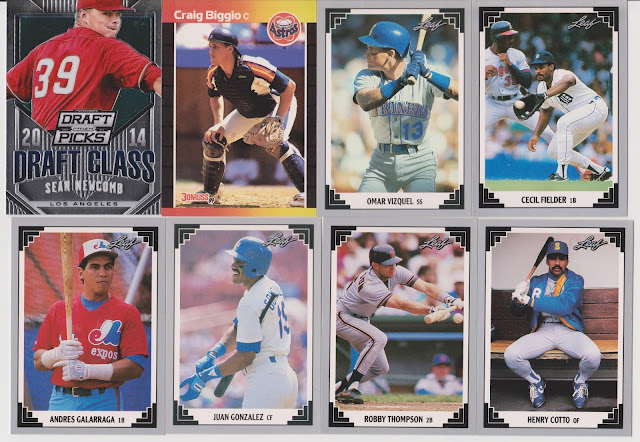 I got excited finding the Sean Newcomb card since it was newer than most the other cards I saw in the bin, but was disappointed more from that set wasn't included.  I wasn't a fan of the Leaf set prominently featured in this pack, but some good names were included.  Cecil is a PC so that was a bonus.  Also glad to get a Biggio as a catcher card. 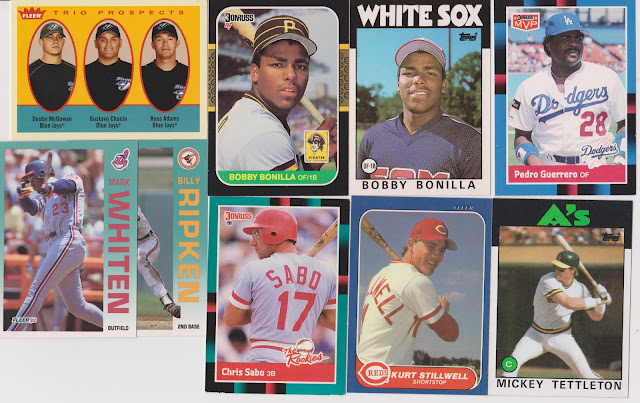 If I could replace any pack I picked up, it might be this one, but I still can't complain since I got the Bonilla cards as well as a once Royal Kurt Stillwell and the Chris Sabo card so the pack wasn't a total bust. 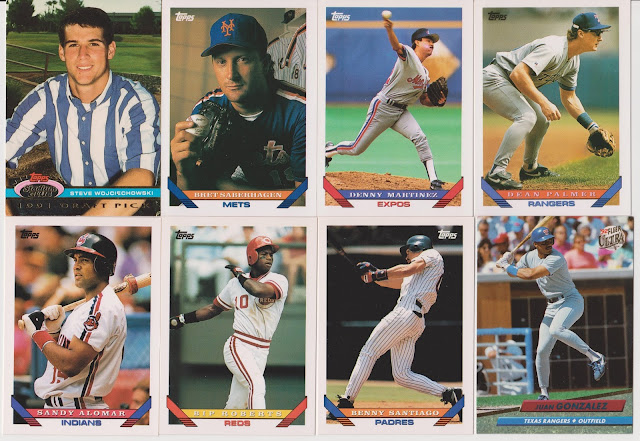 Senior Portrait cards are always cool to see but I'm glad the majority of the pack was 93 Topps.  I also can say I got Bipped.  I think Juan Gone is a borderline PC but after getting these packs, I could really add to it if I start one. 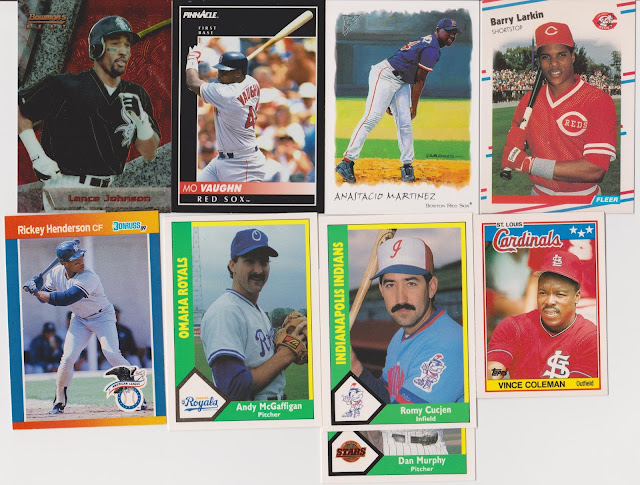 Lance Johnson is nowhere near a PC to me, but it was Bowman's Best, like the Glavine, I had to get it.  Though the best part is the minor league cards as well as the Coleman and Henderson cards.  This might be the best pack I got to be honest. 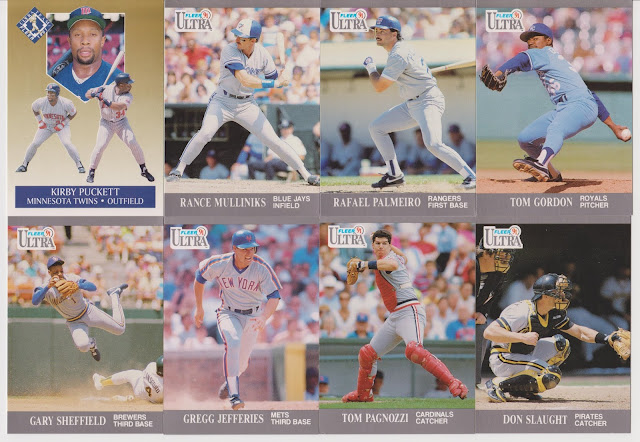 Kirby Puckett is vastly underrated in my collection, so much so that I don't PC him, but this card I really wanted so the pack was worth it just for that card.  However finding the Jefferies, Pagnozi, and Slaught cards really added value to this pack in terms of happiness.  Plus you know, another Royals card, but I think I had that one already. 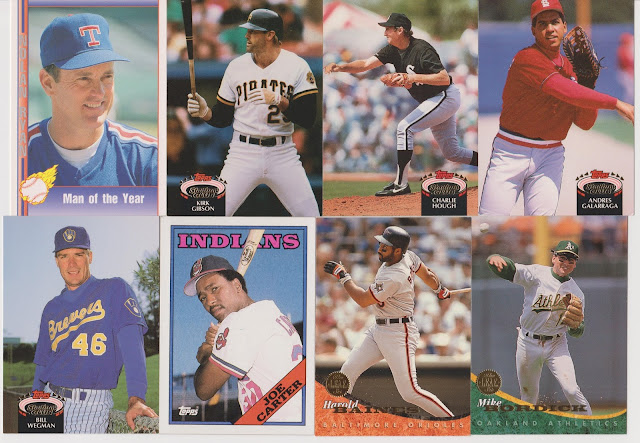 Last pack and really, I was hoping this pack was full of those Nolan Ryan cards, but alas I came up short.  Still though, some very solid names in this pack including a guy who's been talked about a lot lately- Mr. Harold Baines.  I think I did good with this pack.

Overall, 12 packs for 3 bucks, I think not only did I get my money's worth out of it, but I had more fun opening these packs then I do buying a 10 pack box of current product for 20 bucks.  Sure most if not all of the cards were from the "junk wax" era, but it reminded me of my youth and I had no hopes of possibly pulling a parallel 1/1 card that could be worth hundreds.  I got 300 cards for a penny a card and you can't have much level of disappointment in that.

I know I didn't scan EVERY card, but these were the highlights, and just think if I did scan the rest, it would take forever to write this.  So I think I've posted enough for now.  Now that I wrapped this up, I can catch up on about two months of other stuff I've found or need to scan, so I should have plenty to write about, that is IF I decide to write at all.  A couple days ago I got some cards from COMC so I should scan those in a few day, so maybe I might have a couple more blogs before the end of the year.  Thanks everyone for reading and I hope everyone has a great holiday season.  I think my family will celebrate Christmas in early January so that should be a lot of fun.  I think I might introduce my nieces to Viewmasters and the tons of reels I have.  I even have a projector so you can view them on the wall.  Hmm, maybe that's another blog post... I guess I have more scanning and photos to take.  Have a great week everyone!