More cards from Julie, and yet still no Hot Dog

Yesterday I showed off some older cards I got in a package sent by Julie from A Cracked Bat: Baseball Cards and a Hot Dog.  Today I will be showing off some of the newer cards from the package.

Since starting my blog, and holding a few A&G cards in my hand, I have started to warm up to them.  I think the biggest reason is the card stock itself, not so much the design.  I am a fan of borders, but A&G seems to have too much white on the card for my liking.  Anyways, I like these cards, and these three were the core of the team for 2014.  My only fear for Perez is that he becomes injury prone.  As much as I want him to come back, I don't see Shields coming back next year.  As for Gordon, he was just awarded his 4th Gold Glove award (Perez and Hosmer also got Gold Gloves), and I see Gordon as this team's Mr. Royal.  Among all time Royals, he may not be the name most people consider, but I would put him in the top 5 all time just because he has remained with the team as long as he has, and has said he would take an option when his contract comes up despite the risk of losing a good payday.

I am much more of a fan of Topps Heritage.  I love this Gordon with the KC on the grass behind him.  Just like yesterday, this is a posed shot I am okay with.  He looks focused and not staring directly into the camera.

Jason Vargas I was a little rough on this year (the same can be said on my harshness of Jeremy Guthrie), but overall had a good season. While I didn't agree with it at the time, he was a solid addition to the team, and hope he continues his success next year.

Emilio Bonifacio was one of my favorite Royals heading into 2014 (only behind Perez and Hosmer, and probably Gordon).  Then he was placed on waivers.  He was picked up by the Cubs and started te season on fire.  Then he came back down to Earth.  I think he went to Atlanta at the trade deadline, but I always held out hope he would go on a tear again.  I hope he is playing in the majors again next year and hope I get to see him play (either in person or at the least, on television). 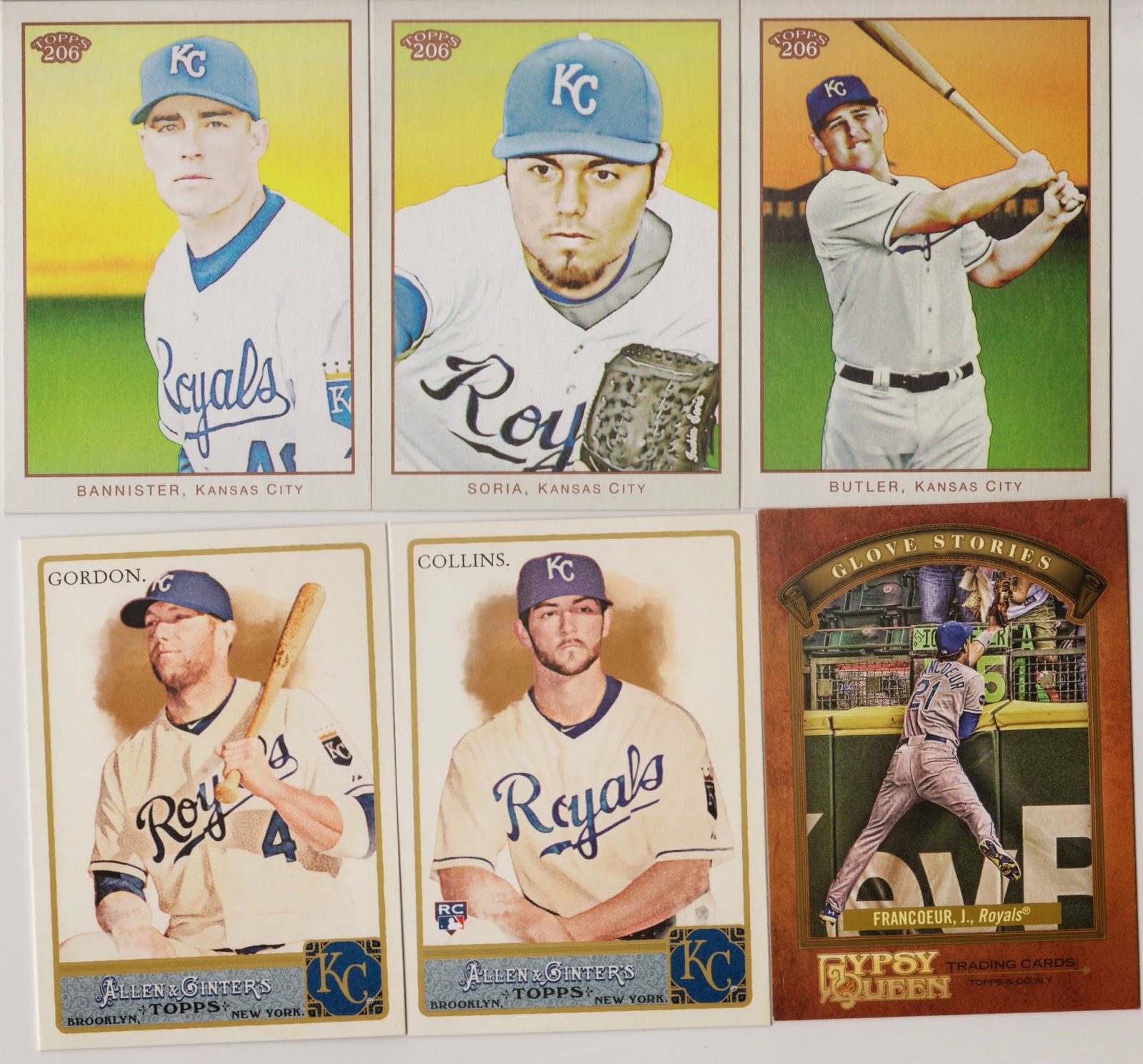 The Topps 206 line I remember from a few years back, as I liked the set some.  I never cared for the name, but prefer them over A&G.  Brian Bannister and Joakim Soria are obviously no longer with the team, but I enjoyed watching them as Royals.  I absolutely love the Billy Butler card.  While I guess officially he is no longer a Royals player (the team paid him $1 million to buy out his contract in hopes of re-signing him for less then his $12.5 million team option), I expect he will be back in Royal blue before his playing days are over.  If not now, he will go the Mike Sweeney route and sign a one day contract and retire.  Though I think he will be back in KC next year, I have mixed feelings about it.  I don't like a team having an exclusive DH player, but he can still play 1st base if needed.  I would prefer a hitter who is more versatile in the field and on the base paths.

I never saw these A&G cards before.  I actually like this design.  I think it has to do with the border and the design the most, but its not as much white.  I'm not sure how many Tim Collins rookies I have, but adding one more to the collection is not a bad thing.

The Gypsy Queen card of Frenchy I never seen either.  Jeff Francoeur endured a lot of stuff from Royals fans his last year plus on the team, but after he was gone from the team, I started to like him again.  One of my favorite stories of 2014 was the prank that his team pulled on him.

Before I go on, let me say I love this design.  I would not mind seeing a base set looking like this.  These are 2014 Topps Stickers.  They look and feel much better than the stickers Panini put out for the sticker books in the 80s.  These feel more like cards, mini cards at least.  The photos they used on the cards are pretty solid too.  After I saw these I looked up the other cards in the base set, and I may try finishing it up sooner than later if I can find them at decent prices.  I like how Sluggerrr has his own car...sticker.  I do wonder why Topps never names him on any of the cards.  They name Wally the Green Monster every time he is on a card.  Every Sluggerrr card I've seen just says Kansas City Royals.  Even the Mascot cards.

Living in the middle of nowhere I have been getting jealous of all the other bloggers showing off their 2014 Stadium Club cards.  I have yet to see them on shelves, though to be honest, money is a bit tight, so its not like I'd buy too many.  Thanks to Julie, I finally have some cards to put in my collection.  While it doesn't make me think back to the old Stadium Club sets, I still like the design a lot.  I am a fan of borders, but this design really works, and the card stock is nice and the photos are crisp.  I like how they didn't take all the photos from the same game either.  I can't wait to finish up the team set, and find a few others I've seen around (like the Clemente). 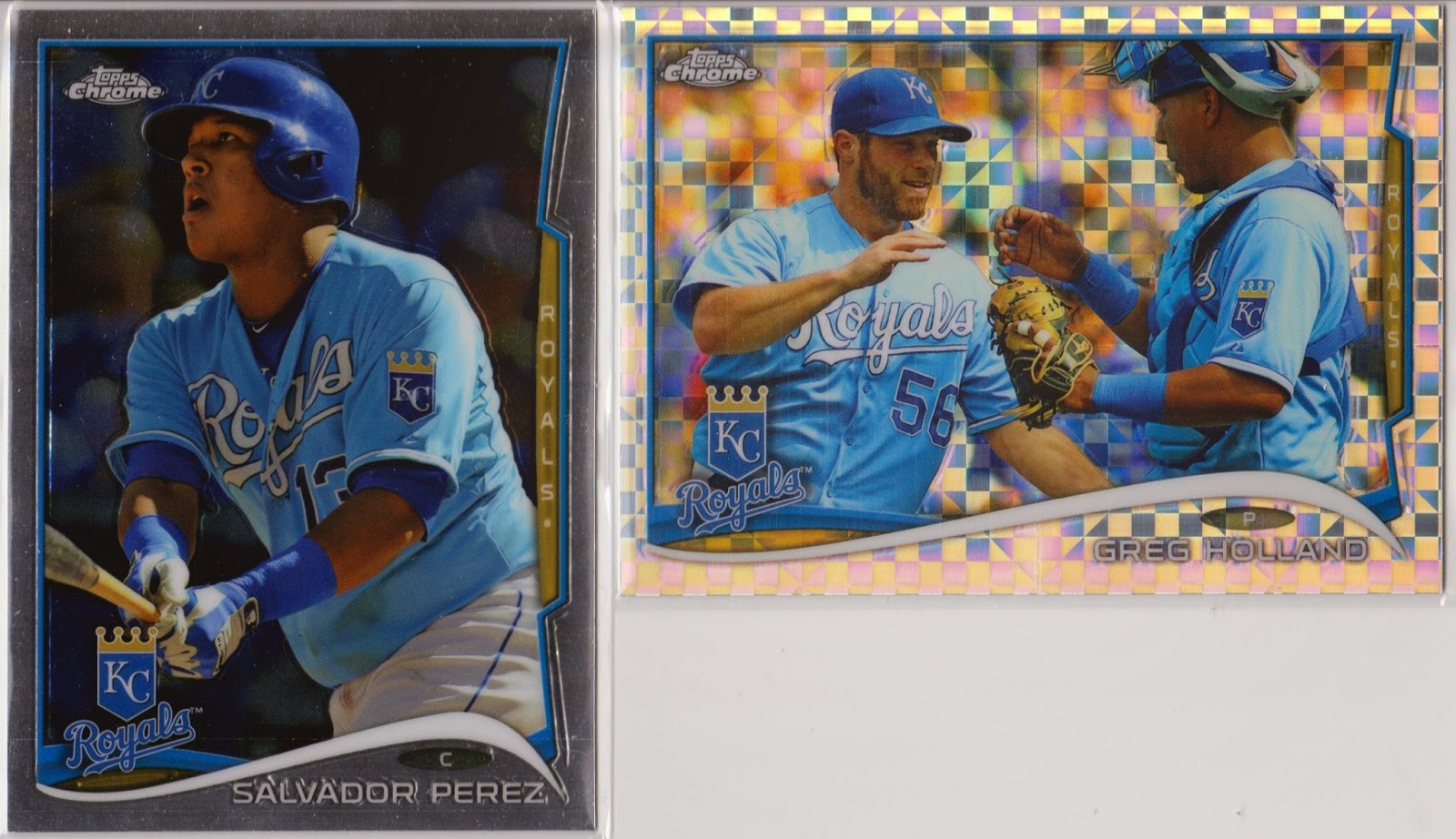 We finish up this package with a couple more 2014 Topps cards.  The first is a Topps Chrome of Salvador Perez.  With him winning the AL Gold Glove for catcher, it is no longer hyperbole when I say Salvy is one of the best catchers in baseball.  As I mentioned earlier, if he can stay healthy, I see a long career.  If Billy Butler isn't retained, I can see Perez splitting time catching and being a DH next year and in the years to come.  While I'm not as enamored with Chrome as I used to be, it works really well with the design of the Topps set.

Greg Holland was on fire this year.  He has really started to make a name for himself, so much so some writers believe KC should trade him to get the max value for him as he might not be able to get any hotter.  This Chrome refractor card isn't done enough justice with this scan.  I don't know how many refractors I have, but its not a lot.  This is going to look great in my binder.  Now I just need to find some 8 pocket pages to display it properly.

Overall, I can't say enough to thank Julie for sending me these cards.  I already know I can't send anything that will match these cards, and before I even got the chance to, I got another package from her.  I will show them starting tomorrow.

I am working on my want list and completed sets lists slowly, but just updated them a couple days ago.  The want list only shows sets that I have at least one card from and shows what I still need to complete the team set.  If a set is not listed there, I have either not added it yet, or I don't have any cards from that set.  The completed set list shows all the team sets I have completed, and range from base sets to insert sets.  It doesn't matter if there is only one card in the team set, if I have all of them, it is a completed set.  Like I said, I hope to be updating them more soon.  As I do I will try to time stamp the last update I made.  As I finish it more, I will try to make it easier to read and access.

Thanks you for reading and have a great day.