I'm not sure I want to do this, but I still can't get it out of my mind.  I'm talking about the Chiefs vs. Broncos game from last night.  From start to finish I can't think of a worse game I've seen in a while.  I felt the ending of the Sunday Night game was bad, and the early Monday Night game wasn't much better, but this game took the cake... then proceeded to fumble, stumble, intercept, and penalize the cake to top it off.

Let's start with the finish first because that will be the most talked about.  Well, the Jamaal Charles fumble (his second of the night), it wasn't exactly the finish, but it might as well been.  Even when KC got the ball they felt like they already lost, I mean if they hustled back to the line, there was a chance for a final attempt at a comeback!

Anyways, the second Charles fumble really stunned almost everyone I know watching the game.  Many questions arose from the play such as:

"WHY DID THEY RUN THE BALL, WHY DIDN'T THEY JUST KNEEL DOWN?"

"WHY CAN'T CHARLES HOLD ONTO A FOOTBALL"

"HOW DID WE JUST LET PEYTON SCORE"

"DID THEY REALLY CHOKE THAT BAD ON NATIONAL TELEVISION?"

"WHAT WAS ANDY REID THINKING?"

I had to paraphrase some of those due to vulgarities but you get the idea.  For those who may not be aware, here is what happened.  Less than a minute left and after Peyton Manning lead a drive to tie up the game, the Chiefs ran the ball at around the 20 yard line hoping to either run out the clock or surprise the Broncos and score an 80 yard touchdown (or something similar).  What happened was the Denver defense snuffed out the play and Charles fumbled the ball, allowing a Broncos player to scoop it up and waltz 20 yards for an easy TD.

It was crazy enough to drive a sober man into drinking... then driving... then proceeding to drive off a bridge!

If that recap is all you've heard about the game, then you might think a last second blunder ruined a good game.  However, that wasn't the case.  No matter who came out on top last night, I wouldn't declare either team a victor.  Sure a win is a win, but I'm sure neither team can be too happy with their performances last night.

Let's back it up a give more of a recap.  Peyton Manning did eclipse 70,000 career passing yards last night, becoming only the second man to only Brett Favre to do that.  2015 Peyton Manning is a knockoff of Peyton Manning in his prime though.  Having said that, sure he will still have flashes of greatness, but all he has proved so far this year is that he's no longer the undisputed best QB in the league and he may not even be the disputed best.  Sure I'm not a Manning fan, and I don't like the Broncos, but his first two games this year should cause concern for Denver.  Part of that could be he doesn't have the same amount of weapons but if that is the case, the rest of the offense needs to step up quick.

Before I go onto the many flaws on the Chiefs, let me also say I wasn't too pleased with all the penalties last night for either team, but especially the Broncos.  An uncalled for roughing the passer and twice getting unsportsmanlike conduct penalties on late hits to Jamaal Charles were too much.  I never advocate for hurting players, but if they would have done it again, I would have been all for retaliation on the Chiefs part.  Fortunately neither Alex Smith or Charles were injured on the hits, but it still doesn't justify dirty plays.  Unlike baseball (which I'm also not a fan of dirty plays, but much more lenient on retaliations), football already has enough contact that players trying to take out players is not needed.

Okay on to the Chiefs.  Let's start with a troubled spot for the Chiefs for a while, the offensive line.  The O-Line need to block better and protect the quarterback and the running backs.  If Alex Smith felt less pressure he would have more time to connect with the wide receivers which still haven't caught a touchdown in over a year.   Hopefully the line can improve in the weeks ahead and make Smith's days easier. 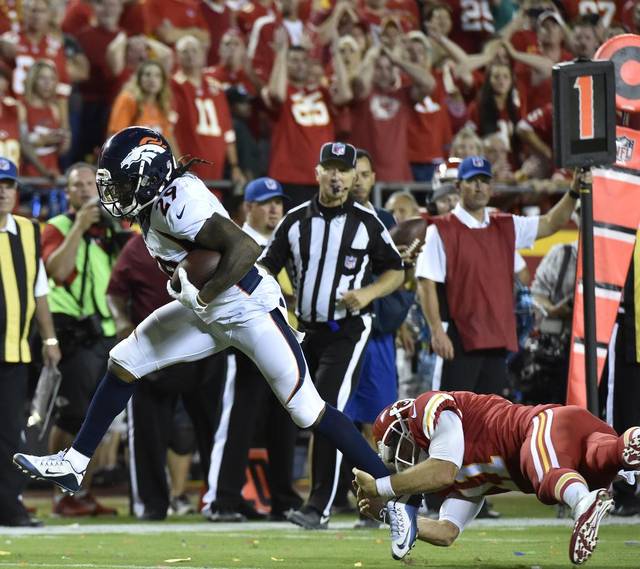 Speaking of Alex Smith, he needs to find more options to pass to. It seems he has found someone in Travis Kelce, but he still isn't connecting with the receivers.  On the radio broadcast last night, they tried to play it off that Smith and Jeremy Maclin are still trying to mesh.  They've had all preseason and 2 regular season games, and both are veterans, they should already be connecting by now.  On top of that, Andy Reid coached Maclin in Philadelphia and backup quarterback Chase Daniel played with Maclin in college at Mizzou, both Reid and Daniel should have eased Maclin and Smith into working together better by now.  Even if they aren't gelling just yet, that's no excuse for the other receivers Smith can't connect with.  This is Smith's third year in Kansas City and as an offensive leader of the team, he needs to make sure his teammates can work with him.  If he can't than maybe its time to go.

I'm not saying bench him and put in Chase Daniel, though I wouldn't be completely against that idea, I'm just stating that Alex needs to step up and prove he is a team leader.  I will admit he does get a lot of the blame, but when things go right the quarterback usually gets most of the praise, so it's only fair. 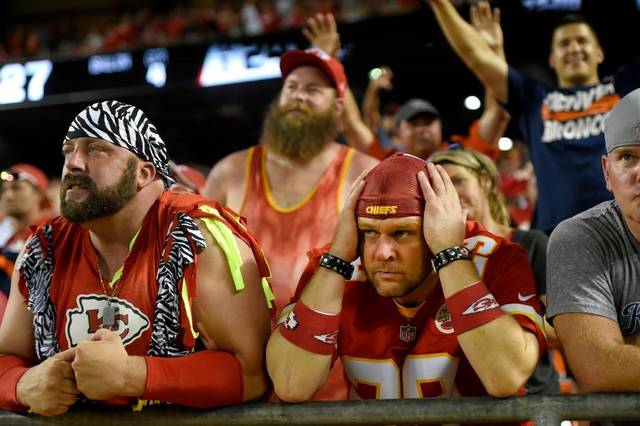 The wide receivers need to step it up too.  They need to catch the ball, and if they can't at least put themselves in the position so defenders can't easily intercept passes, tipped or otherwise.  Maybe Jeremy Maclin hasn't gelled with the team yet, but he needs to soon.  I am a big fan of his, but a lot of his critics say he just isn't a #1 receiver, its time to step up and prove them wrong.  He isn't the only one though.  De'Anthony Thomas moved from running back to receiver this past offseason to add depth, its time to use him.  Frankie Hammond and Jason Avant also need to become threats too.  The bulk of the passes can't continue to go to Travis Kelce even if he is a bright spot.

Now on to the running backs.  The aforementioned De'Anthony Thomas was able to become a wide-out because of the depth at running back.  Nobody will displace Jamaal Charles yet, but having Knile Davis as another option is always good to have.  Especially if Charles is making mistakes like last night.  As much praise as I hear Charles get, I also hear a lot of negatives too.  He has no stamina (which he is getting better at since Reid came on board), he can't hold on to the football (which is what happened last night- twice!).  They told a story that Charles carries a ball around the practice facility with coaches trying to knock it out.  I've heard that other teams do that too, unfortunately they are college teams.  By the time you're in the NFL (especially as long as Charles has been), you shouldn't have to do that drill.  Sure mistakes happen, but these weren't simple mistakes.  He simply need to protect the ball better.  Even the CBS announcers squared in on it at the game last night after his first fumble.  When the league knows your weakness, you become a very big liability.  Hopefully he can recover from this quickly.

After the game ended I watched my twitter explode on who should get the blame.  The consensus was in dispute.  Charles took the blame post game, so did Andy Reid.  Overall the entire team shoulders the blame for this one, Smith, Reid, Charles, the offensive line, De'Anthony Thomas, Jamell Fleming (who Manning personally used to burn all night), EVERYBODY!  Not one Chief can really hold their head high after that performance.

In total Alex Smith had two interceptions.  Jamaal Charles had two fumbles.  De'Anthony Thomas had one fumble on a return.  FIVE TURNOVERS!  Peyton Manning even managed to throw a pick as well, in one of the only bright spots for the Chiefs.

So were there any other positives?  Sure, Charles ran for 125 yards, and Knile Davis had a nice rushing touchdown.  The Chiefs defense held Denver to 61 rushing yards total.  Jaye Howard got seven tackles and added six more including 2 sacks.  Also of note is Derrick Johnson inched closer to the Chiefs all time tackles record as he notched two more.  Hoping to score the record against Denver, he will have to wait until next week where he only needs 5 more.

Next week is a long time for Chiefs fans waking up still trying to let go of the game from last night.  A tough loss or an ugly loss is never easy to get over, but add in the fans have 4 more days to ponder it makes it seem like an eternity.  The next Chiefs game is 10 days from now!  It is a Monday Night Football game against the Packers.  Hopefully the Royals can provide some relief until then.

Some people may think I'm jumping to conclusions and getting worked up over one game.  That is likely true but I needed to vent.  I am still in disbelief over the game.  I'm not ready to call for heads to roll like in 2011, but I do think the Chiefs need to correct some critical problems before they become weekly problems.   It's only one game, and let's just hope it stays that way.

Thanks for reading this really long rant, and I hope you all have a great day and weekend.  I hope your team fares better this weekend.