Okay, so its time for the final installment of stuff I passed up, next time I'll show what I got.  So let's get on with this stuff I didn't deem worthy of adding to my collection. 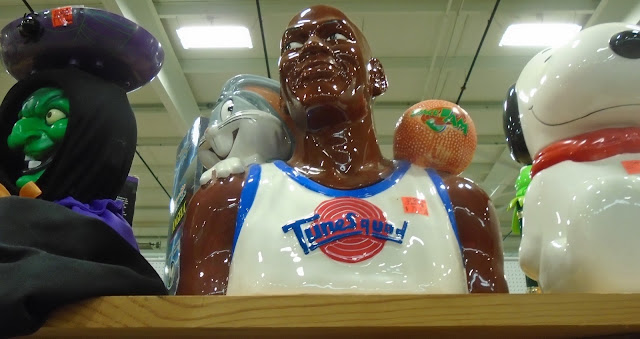 I spotted two of these in one day.  This one was a lot more expensive, but I still thought it was worth it to take a picture of.  I never understood the appeal of collecting cookie jars, but after the last few years of seeing odd ones, I understand now.  I'm glad I don't collect them though.  The Snoopy one on the right would be kind of cool though. 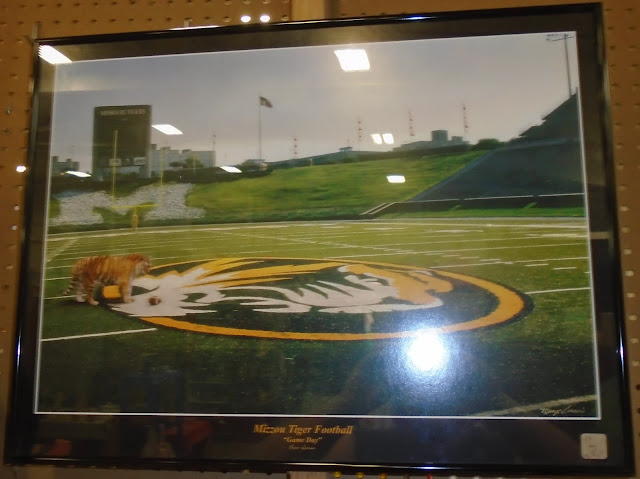 I liked this print when I saw it for a number of reasons.  First it would be cool to see an actual tiger in the middle of Faurot Field, and I've heard rumors of people wanting a live mascot (could be cool, but I'm against it), but there are other reasons I like this print.  Mainly the scoreboard.  I can't pinpoint the year this was from but its been quite a while since that scoreboard was around   In fact I think they've had two since this one was used.  The concourse is also smaller and some of the buildings in the background aren't there anymore either.  Mizzou has really expanded the last couple decades, so this brings back a few memories.  While the print was worth the price (I believe it was $15), I passed because I have posters now I want to hang and have no room. 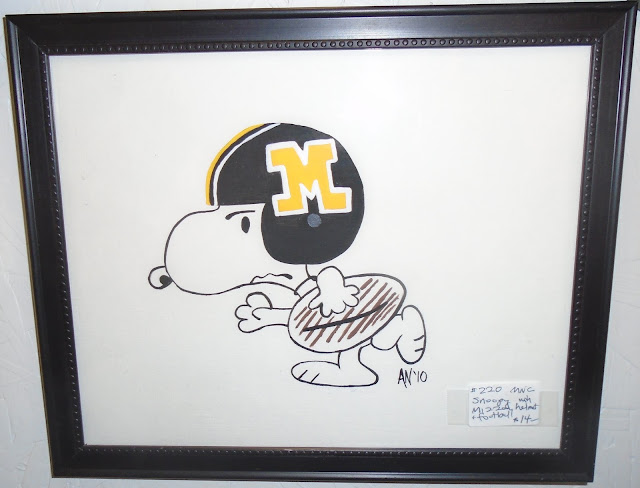 I like Snoopy drawings even though I will admit I'm not the biggest fan of Peanuts.  I like them but I don't watch the specials on TV and hardly read the old strips still in papers.  This was a little simple but I liked it enough to snap a shot of it.  A couple days ago my friend posted a program on his Facebook site (which is a spin-off of his blog Talkin' Truman) and one of the photos reminded me of this drawing.  His Facebook page is here for those interested.  He posts a lot of cool stuff and its more accessible to him then the blog.  I can't wait to see the pictures he posts once the season gets started.

Okay, now its time to move to the front room of the Mall.  At this point, I was getting a bit hot and tired so I didn't take as many pictures.  Though next time if I start in the front I might take more.  At any rate, here is a few I took. 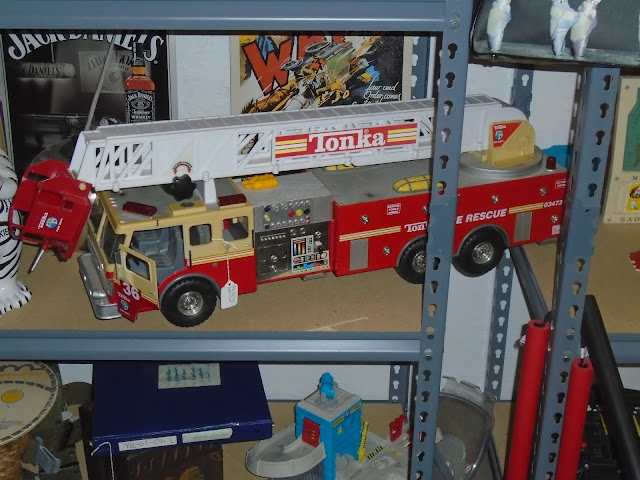 That fire truck is massive for a toy.  It didn't surprise me it was a Tonka.  I never had one this cool but I remember telling my mom about how I still thought about the one I did have growing up.  She forgot about it but I described it.  It was a two piece one that had a giant ladder that was attached to a string so you could crank it up and down.  I had fun playing with it but then the ladders broke and so did the string so I stopped playing with it.  I doubt I still have it, but if I do its a rusted mess that likely isn't salvageable.

This one is a lot more modern and I like how it has the bucket at the top.  This one is probably newer than the actual fire trucks my town still uses.  I could see myself if I had the room, I would possibly have a toy room, but since I don't I had no need for this. 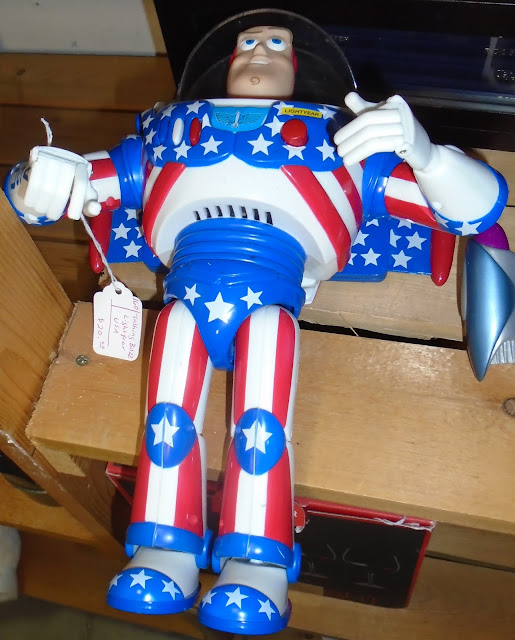 TO AMERICA.... AND BEYOND!!!  This was an interesting piece to me.  Next to it is another variation of Buzz Lightyear but I liked this one much better.  I've never seen variations of Buzz before, but this is pretty cool.  I could totally see myself using this as a decoration but the $20 price tag was a bit steep for just that.  I didn't try the buttons or anything or even look to see when it was made, but it did catch my eye so it was worth a snap. 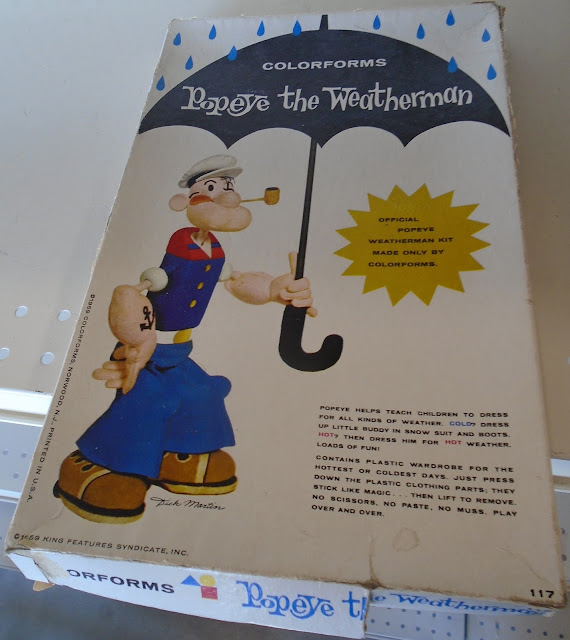 This also caught my eye and I wasn't sure what exactly it was.  I can't see Popeye as a weatherman though.  "THE FORECAST TODAY IS HOT AND WINDY!  WELL, BLOW ME DOWN!  EAT SOME SPINACH AND COOL OFF INSIDE!"

I do love the creativity of older toys and how simple they were.  The best part is I bet this got many hours of use out of it too.  I guess this isn't exactly a toy, but still it gave kids more imagination, and who knows this piece alone might have inspired a Popeye fan to become a meteorologist.  I always thought it would be fun to be one until I found out it took lots of Science and Math, my two least favorite subjects, so I moved on.  Though I sympathize with weathercasters more than most people.  Imagine if you had to predict the future and only got it right half the time, you'd either be a sports pundit or out of a job.

Okay this final piece struck me as odd, and I really can't describe it, so here it is. 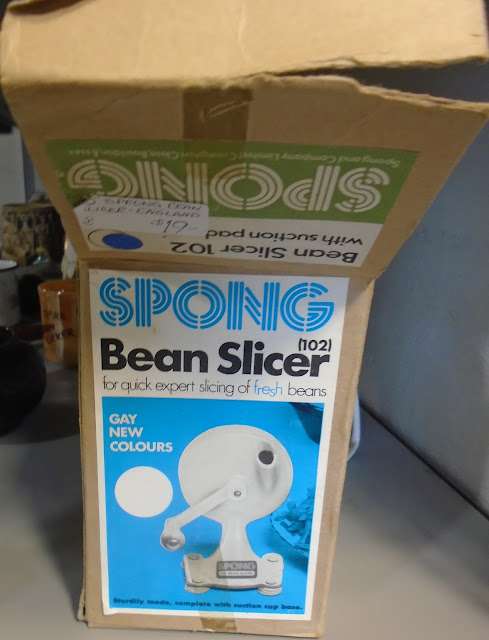 A BEAN SLICER?  WHAT IS THAT?  My mom replied "I've been on this Earth a long time but I've never heard of a bean slicer".  After a few days of pondering I still cant wrap my finger around it. 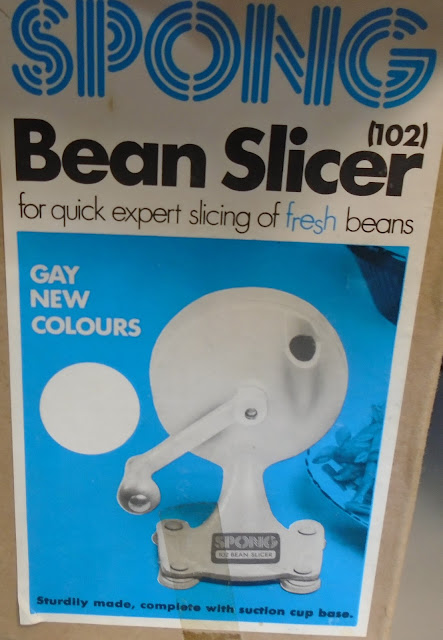 A few things intrigued me though.  First is obviously this is old because of the condition of the box but also because it was acceptable to say "GAY NEW COLOURS" on the box.  I bet that wouldn't pass today, though I still use the word in that context sometimes.  Second it is old because of the spelling of the word colours.  Maybe this was adapted from a British version, or more likely it was more in vogue to spell it like that back then.

Also, when has WHITE ever been a NEW or even a HAPPY color?  I didn't understand that, however since the box was open the slicer was actually an aqua-ish color, maybe seafoam green, something like that.  I guess that counts.

I wonder how many they sold just on the addition of the suction cup base?  All in all, it was an interesting piece to find, right at the front of the store, but one I had no need or desire to get, so I passed it up.

As I said I passed over a lot of stuff in the front of the store, but next time I might take more photos.  So that concludes the stuff I passed up, next time I will show you what I did get.  It wasn't a lot, but it was a few things that made me happy and were cheap so I got them.

Email ThisBlogThis!Share to TwitterShare to FacebookShare to Pinterest
Labels: Mizzou