Last month was my birthday, I didn't make much of a big deal about it and didn't really want anyone else to either.  I wasn't that that I'm getting older and don't want to be reminded of it, I just didn't have plans and well, didn't want to be reminded of it.  It was cool though and it allowed me to do some stuff I wanted and needed to get done anyways, so it all worked out.  Now I'm almost caught up with my collection, and have even contemplated working on some projects around the house after watching some DIY shows.  I've also been going though a bunch of stuff of mine and getting rid of stuff I don't need in an attempt to downsize.  Its a slower process than I am hoping, but the progress I make is pretty big so again, I'm happy.

I had some stuff I wanted to give to my friend so I stopped by his place a couple days before my birthday to drop it off, and he actually got me something for my birthday (which for the record is also Valentine's Day).  I never expect anything, but when he gives you gifts, you can't help to be amazed at how he finds some of this stuff, and usually how frugal he can get it. 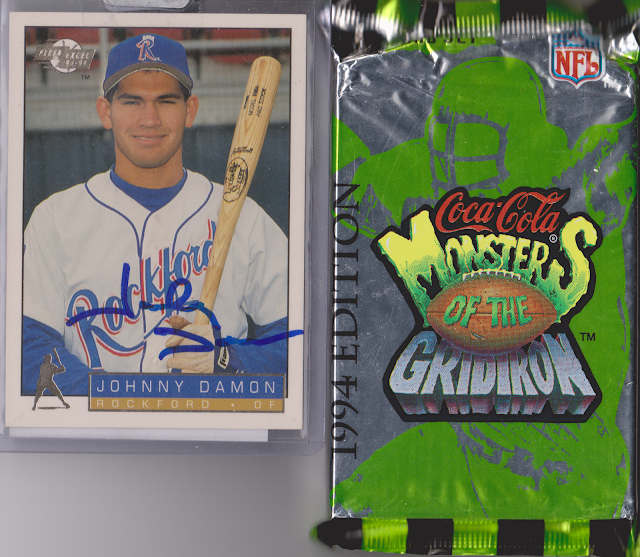 A JOHNNY DAMON AUTOGRAPHED CARD?  Are you kidding me?  This is also the perfect card to get signed too.  I was amazed he found one, and he even said it was cheap (his definition of cheap varies from mine, but I figure he didn't spend very much on it).  I would be happy with an autographed card of any type of Damon, but having it Royals related makes it the best.  I also already have a copy of this card, so I don't have to search for another one.  Speaking of Damon, I recently updated my Damon cards, and at about the 100 card mark.  I have mostly Royals, and a good amount of Red Sox and Yankees, but I could improve my Indians, Rays, Tigers, and A's cards.  It would be nice to get to 150 or so by the end of the year, but I'm not trying to push too much since I have a lot of other stuff I want to get done (non-card related), so I'd like to spend my time on that.  Once that clears up, maybe I will try again.

Beside the beautiful Damon card is a unopened complete set of Coca Cola's Monsters of The Gridiron 1994 Football cards.  I've mentioned in the past its a set I was trying to complete, and may have mentioned its one I'd like to finish without any help.  My friend told me he found a cheap auction with two complete sets, and he kept one.  So besides it being a gift, I'm not turning it down.  Initially I thought about opening the cards to showcase them, but I think instead I will keep the package sealed.  I usually can never keep stuff sealed, but this gives me a chance to still complete the set by myself, and it gives me an unopened pack to boot.  I think I'm about halfway done with the set anyways, so if I try hard enough, I should get most of it completed by the end of the year, again, once I finish outside projects.

I would love for Coca Cola to bring back this set again, and I think it would be an amazing marketing ploy. Everyone says crazes comes and goes, and aside from gaming cards, its been a while since major companies used trading cards as a way to entice consumers.  Who knows, maybe it could spark the hobby again.  Speaking of which, I'm happy to hear Panini has the license to NASCAR, I can't wait to see those cards.  Also, does anyone know if Topps is releasing Olympic cards this year?  I usually hear something I think by now, but haven't this year.  I wasn't a fan of their last set they made, but who knows maybe if they make new ones I might like them.

Since I'm scarce on scans today for the topic I thought I'd show off a couple more on recent Listia wins. 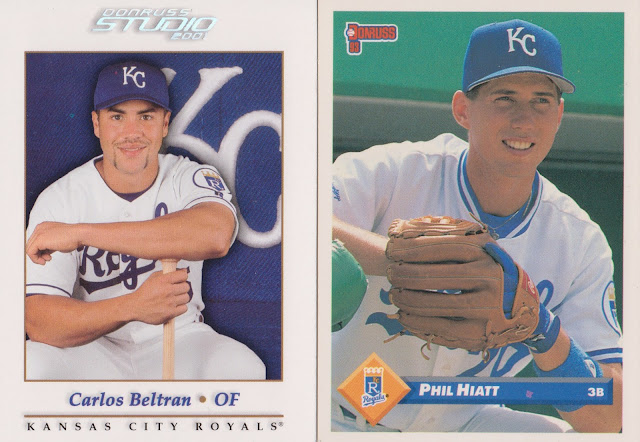 I won the Carlos Beltran card a while back after I updated my Royals collection and saw I didn't have it.  When it came, the seller threw in some other Royals cards.  Most of the other cards I had, but the Phil Hiatt was one I needed.  So it was pretty cool to not only get bonus cards, but one that I needed anyways.  The Beltran card actually was my first Royals card in that set, so it allowed me to add another set to what I have.  In the coming weeks I might make a Just Commons order to fill some of those sets in (also gives me a chance to add some more Damons too).

This final scan is a mixed bag. 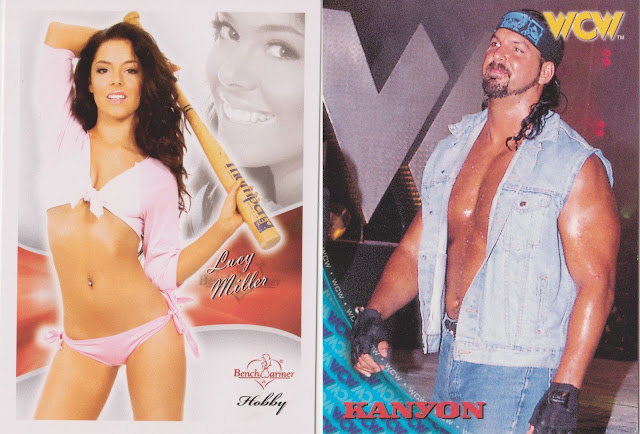 Let the record show that I don't really collect Benchwarmer cards.  However I see them pop up quite often on Listia, and for the most part they get too pricey for me.  When I made a list of goals for 2016, one goal I had but forgot to mention was to add a Benchwarmer card to my collection.  The only catch was that the card had to depict baseball on it.  For those unaware, Benchwarmer cards depict many topics, but the majority is sports.  They get half naked girls and put them on cardboard.   I would have like to have gotten an autographed card, again it didn't matter of who as long as baseball was depicted on it.  Those go for crazy prices to me, but this one nobody bid on and the starting bid was 399 credits with under an hour to go.  I placed my bid and was shocked to see I won as the only bidder a short time later.  With this out of my way, I might look for an autographed card cheap, but otherwise I have no interest in getting anymore from this set which has been coming out since 1993.  The only exception is if I find some cheap ones of Maria Kannalis who I kinda have a thing for.

The other card I also got cheap.  And you must ask yourself "WHO BETTER THAN KANYON?"  If you answered NOBODY, then cool, we both liked WCW, if you had no clue, that was one of Kanyon's catchphrases.  This WCW card is from their 1998 set I believe, maybe their 1999 set (I confuse them, I have a few of both).  I didn't get it on the basis that I'm a huge fan of Kanyon, though I did like him.  I got it because it was cheap, and because I like the late 90's sets WCW produced.  While I have nowhere near a complete set of the 1998 Topps, 1999 Topps, or the 1999 Topps Embossed sets, if I find them cheap here and there, I will pick away at them.  This particular set actually had a Jay Leno trading card, and I owned it at one time.  One day I would like to finish all three complete sets, but I'm a bit conflicted because I really don't want to expand my wrestling card collection much.  From here on out I think I'm going to pick up cards bit by bit instead of buying packs, to cut down on doubles or cards I really don't want.

I think this is a good stopping point for tonight, I have a few things I need to finish tonight, and might binge watch more of a late 90's TV Drama I found on Youtube the last couple days (Savannah was my show in 1996 and 1997 thanks to Jamie Lunar).  Thanks for reading and have a great night.

Email ThisBlogThis!Share to TwitterShare to FacebookShare to Pinterest
Labels: autographs, Beltran, Damon, Monsters, Put Your Name On It, Royals, WCW