Odds and Ends and Listia

I've been sidetracked the last couple days doing some cleaning, and working on a couple projects.  One of which is progressing a bit faster than I thought.  When I finish it, it will be showcased on here, as it is related to trading cards.  Actually two projects I'm working on are related to cards.  A third project is a nightmare waiting to happen, but I'll have fun doing it.  In the meantime, lets look at some cards.

All four of these cards I won on Listia.  I was pretty sure I didn't have the Anthony Peeler card, but I'm not positive.  For now it goes into my Mizzou stack until I get them all sorted out.  I have a pretty good amount of his other cards, especially his Lakers cards, so its likely I already do have it.

Next is Jack Rudnay.  I won't lie and say I remember him, but it was cheap and an older Chiefs card.  I'm not trying to get every Chiefs card ever, but I thought it would be a fun card to get.  I just now noticed that the Chiefs logo is missing from his helmet, I wonder if it was a licensing issue.

The Kamala card won't be mine for long.  When my sister gave me some WWE cards, when she looked through them she jokingly said "If you got a Kamala card, I would possibly have to take it".  I didn't get one that day, but a short time later I did see this Kamala card on Listia and nobody else bid, so I won it.  Its funny how many of the Legends cards don't go for much, but a Heath Slater card will get some good bidding wars, I guess its because he's on TV.

Lastly is a David Nail country music card. I had a slight interest in this set when it came out and I like the design, but the reason I got this card was because he is a Missouri native and went to Mizzou (he's also a huge Cardinals fan).  I can't say I listen to a lot of his stuff, but the Mizzou factor made me make a bid on it.  It didn't go for much, so I now have it.  I'm watching a few more cards in that set, but otherwise have no plans to work on it.  What is nice about this card is that I believe its the gold variation card, so getting it so cheap is a plus. 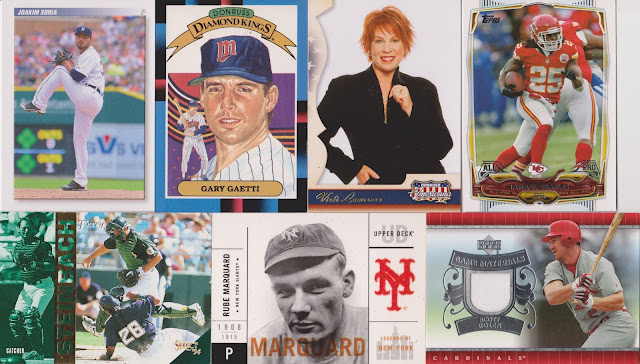 The Joakim Soria card is another Listia pickup.  On the back is a few Bible verses and he tells his story on when he accepted Christ into his life.  I never heard of these types of cards until recently but I guess a few athletes have them.  This card will fit into my "Once Royals" collection, but I mainly got it because I liked the idea of the card.  I hope to find more like these one day.

The rest of these cards I can't remember how I got to be honest.  The Vickie Lawrence card I've had for a long time, I pulled it out for some reason recently (I was watching Mama's Family a bit lately).  The Jamaal Charles card I just had nearby, so it got scanned.

The Gary Gaetti and Terry Steinbach cards were part of a repack I've had for a bit, but never got around to scanning.  They were the only cards I really cared about, so I decided not to scan it all.  The Gaetti will also go into my "Once Royals" collection, and the Steinbach likely won't go into my collection.  I just liked the card and forgot about how much I liked the Select brand in the 90's.

The Rube Marquard card I have no idea how I got it.  Maybe it was in the repack too, but I stumbled on it the other day, and I liked it.  The Mets logo has a felt feel to it and overall its a cool card, so I kept it and is now in my collection.

Lastly is a Scott Rolen relic card.  I've had this for a few years, and thing it was in a repack box I got at Walmart long before I started this blog.  I was going to send it to someone but at the last minute I decided to keep it.   I like the design of the card, and I don't pull too many relics so it still has some meaning to me.

At this point, I'm out of scans, and so I think I'll stop there.  I hope to have some more scans soon, but I have more cleaning to do the next few days, so might be a bit busy.  I will say I found a few cool things I can show in the future while cleaning, so when I post next it should be some goodies at least.  Not all is card related, but its still fun to look at stuff again.