It's time to get back to work.  I'm so far behind on posting that I can't scan anything until I show some stuff off.  Today I will show off some 2015 Score Football since its almost Football time. 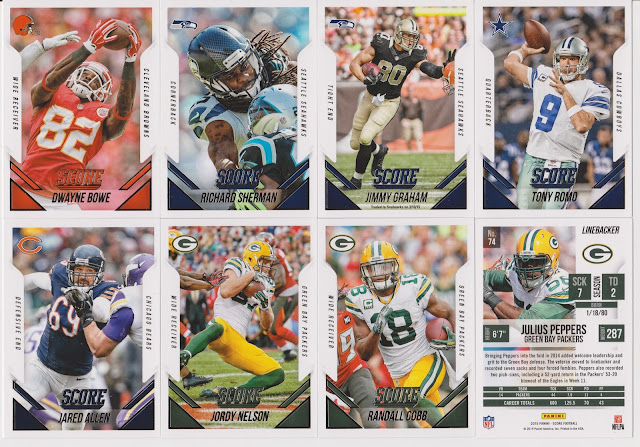 No photoshopping Dwayne Bowe into a Browns jersey.  I am still a bit sad to see him go, but I am glad I got this card.  One thing is for sure, that wasn't a touchdown catch, unless it was from the year before.

This was a megapack with I think 40 or 50 cards and I can't complain on who I pulled.  The design isn't too bad either.  A little excess white border, but at least they went for a different design this year.  The backs also look nice too.  It's not a bad guess to think I would buy more packs, because I likely will.  I'm not his biggest fan, but I'm glad I pulled a Sherman, same goes for Romo.  I might add Allen to my former Chiefs section of the binder too.  Bowe will go in the regular section since he's still in the jersey. 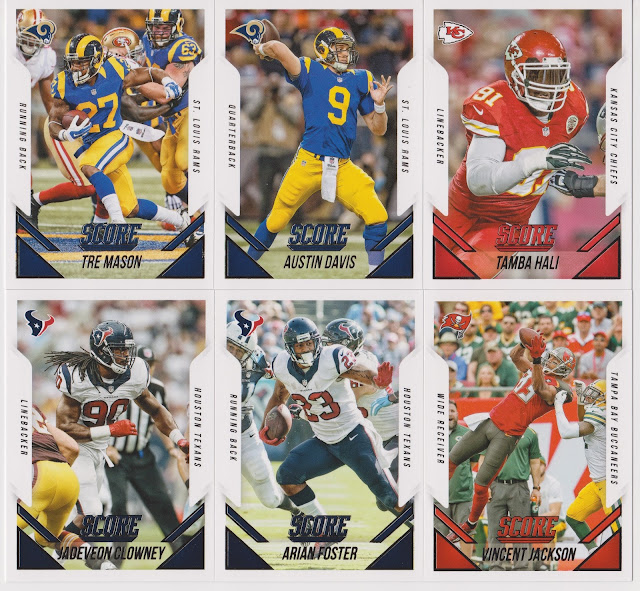 Rams throwback jerseys, I like!  I'd prefer another Ram over Austin Davis, but oh well.  I like the Mason card.  I also got another Chiefs card.  This time a current Chief.  Cool beans!  Add in a couple big name Texans and a Bucs player, and this is a nice pack.  If this was 2013, I would add Jackson to my Bucs binder, but I abandoned the team I cheered for since 1991 after the 2013 season.  A lot of factors played into it, including poor play, management, and my passion for the Chiefs.  When the Bucs announced new jerseys (which I still don't like), it gave a great time to break away.

Okay, how about some rookies? 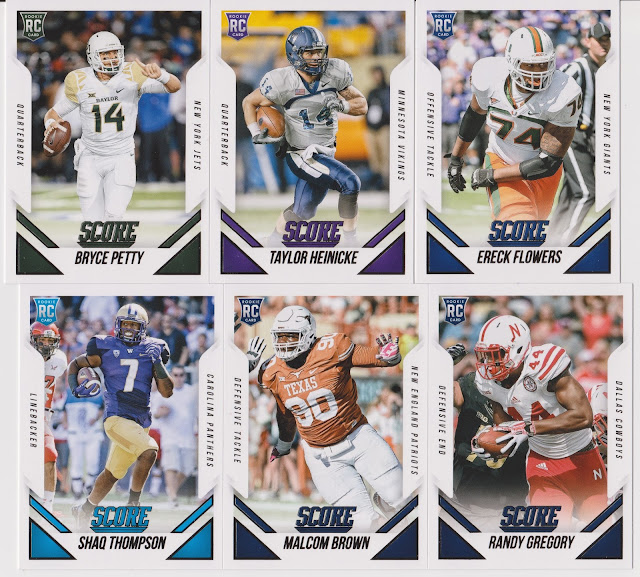 I think I did good on these too.  I would have liked to get a Missouri player, but I can't complain.  If I decide to keep my Hurricanes binder, Ereck Flowers will have a spot in it.  Even though I don't get to see Miami play much anymore, I still enjoy watching them play.

Ok, so now onto the inserts. 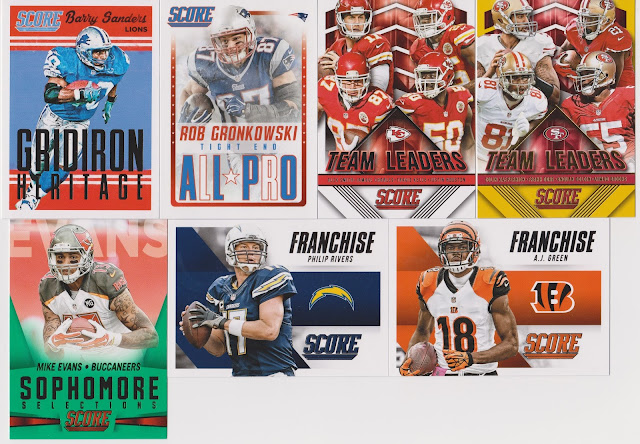 Let's start off with a bang!  Barry Sanders, heck yeah!  This is my favorite card of the pack.  Sure the jersey might almost bleed into the background, but its Barry Sanders.  I think the reason I loved watching football on Thanksgiving was seeing Sanders play.

The Franchise cards of A.J. Green and Philip Rivers are okay I guess, but do nothing for me.  Same for the All-Pro of Gronk.  Though I will say if it was a different player I might like it better.  Same could be said for the Sophomore Selections, but despite who is on it, this is a nice card.  I'm not mad for pulling it.

Last are the Team Leaders cards.  The regular version of the Chiefs was nice to pull, but the gold variation of the 49ers really pops.

Overall I'm happy with how this pack turned out.  I may not buy another big pack, but if I find smaller ones, I might get one from time to time.  I hope to find a Maclin card in a future pack.

Since football isn't everyone's cup of tea and I haven't posted in a while, I'll show a baseball pack I got recently.  My mom picked it up at Dollar Tree on her last visit, so here it is. 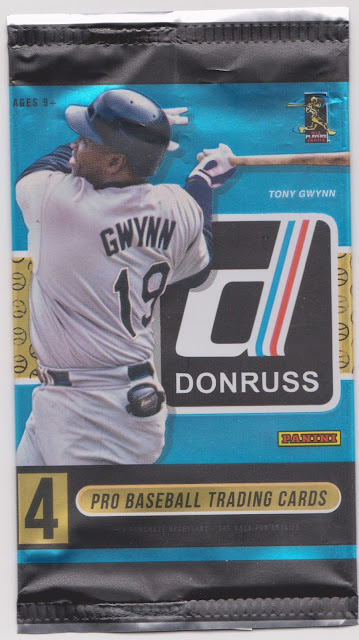 I guess a quarter a card isn't bad, but I'd at least like to see them licensed for that price.  I told her not to buy anymore of these on future visits as they aren't worth the price.  Anyways, let's see what I got.

I must say for a $1 pack, this one wasn't too bad.  The Kluber and Votto cards make it worth it I guess, but I might like pulling the Santana card more.  So while it's only 4 cards, I could have done worse.

How about a couple more baseball cards? 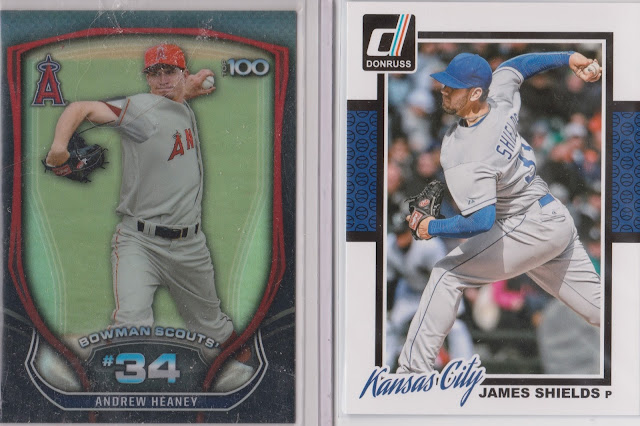 I won these earlier in July pretty cheap on Listia.  I think I already had the Shields, but even if I did, I could give it to a friend.  the Heaney I knew I didn't have and only bid because it was cheap and I've actually heard of him.  I have no real interest in getting all 100 of the cards, but I have a couple now.  It will be interesting to see how some of them do after being traded at the deadline.  Heaney has had a solid year in the majors this year with a 5-1 record and an ERA under 2.00.  Maybe this card will be worth something soon.  If it is, I'll find a better card holder for it.

Well, that will wrap it up for today, its good to be writing again, and I have plenty more to write about, thanks for all the comments lately, and I've been reading a few blogs lately, I hope to be catching up in the next few days.  Thanks for reading and have a great night!

Oh, by the way, in case you missed it, I posted a new post on the Missouri Sports History page honoring former Buffalo Bills running back Curtis Brown who passed away last week. It's not much, but its got some good feedback from a few people.