I am online quite often, usually because I'm bored or to take my mind off other things.  As a result, I search for freebies and contests. Until I started this blog, it was mainly just for random stuff.  In the last few months, I have retweeted a lot of contests on Twitter.  I have been fortunate enough to win quite a few.  Top that off with the amount of blog wins I've won lately, and I have been blessed.  So much so that I have decided to take a break from entering contests for a while.  I will still try to promote them but I want other people to have a chance to win.  I'm not sure how long this will last, so I could enter one tomorrow, but unless it is something I've been dying to get or something truly amazing (like a win i should be getting in a week or two), I think I'll let you guys try to win.

The reason I bring it up is because recently I got a package in the mail called a Duck Pack.  Duck Packs holds contests on twitter, and I won one a while back.  Since I fell behind, I'm just now showing it off.  You should really follow if you don't, I really enjoy the tweets.

Here is what I got. 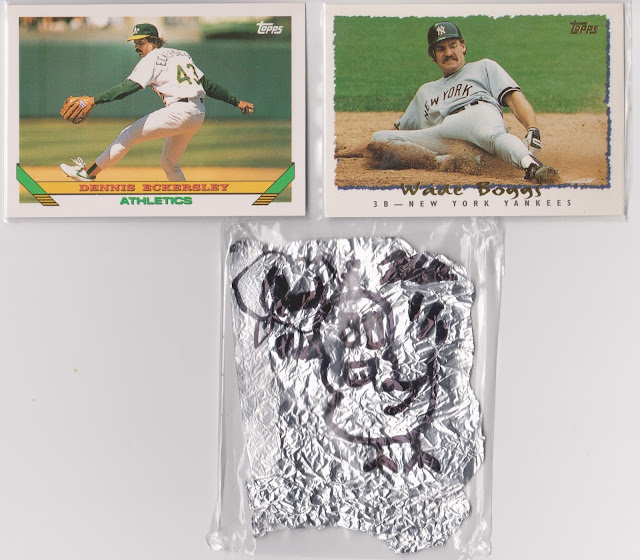 I got a drewing! (That's how Simon would say it on Saturday Night Live, never cared for the Mike Meyers character, but I've been saying it a lot lately).  I actually got two drewings (rolls off the tongue doesn't it?) the other is scanned later and is on the other side.

The pack begins with a couple great players I loved watching growing up.  Dennis Eckersley is one of my favorite pitchers ever (well in the top 25- among ones I've seen pitch), and Wade Boggs was so cool when he was in Boston.  He was also close friends with Mr. Perfect, so that isn't a bad thing either. 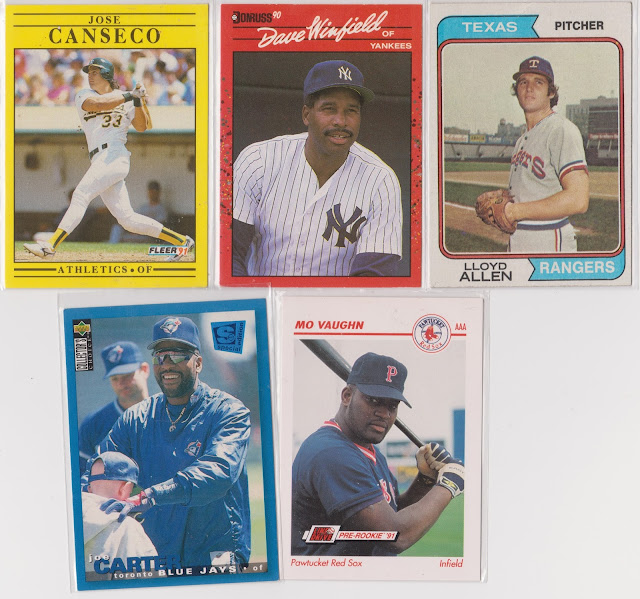 These aren't really cards I needed, but they are all solid players so I'm not complaining.  1991 Fleer, WILL YOU STOP STALKING ME!!!!  1990 Donruss is more like a creeper, I see them around but they scatter before they get spotted too much.  The Lloyd Allen is new to me, and I like it.  I also love the Joe Carter.  The blue SE version of a Toronto Blue Jays legend really stands out.  That is definitely binder worthy.  Same goes for the Mo Vaughn.  While I whittle down the Red Sox collection, Mo is one I plan on keeping for now.  This pre-rookie is one I've spotted before but never had.  It has found a good home.

So now let's look at some newer stuff. 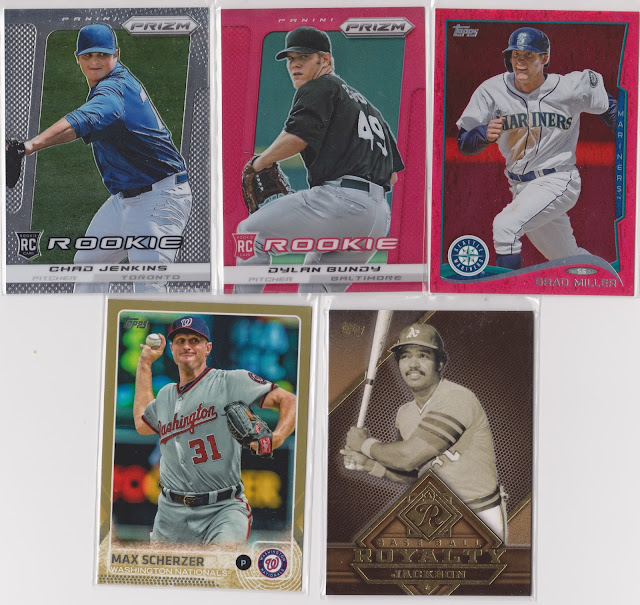 A nice couple rookies in Chad Jenkins and Dylan Bundy, I'm glad I got the Bundy.  I might already have one or two of his other cards in my others binder, if not, this one is going in.  The Brad Miller might go in too unless somebody wants it, than it won't.  I like the parallel designs, but don't have a lot of them.

The Jackson card is amazing!  That is from the 2015 Topps set, and I am going to look into the rest of the insert set.  It really pops.

Finally is the Max Scherzer Gold parallel.  This is my favorite of the Duck Pack.  Even if I didn't collect Scherzer for my Mizzou collection, I would still collect him because I've always liked him.  He would fit quite nicely next to my Justin Verlander PC, but as it goes, this one will go into my Mizzou collection and since their colors are black and gold, this will stand out even more.

Finally is a couple more great cards and another drewing. I CAN'T STOP SAYING IT!  Typing that in all caps made me sound like Regis who randomly shouts things. 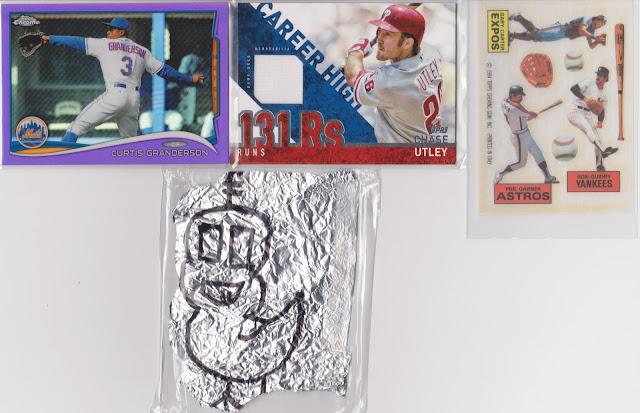 I wish I could draw that good, but I can't.  OK, so the Curtis Granderson is a really nice card.  I don't see him play much, but I think if I had MLB TV I would likely watch a lot of Mets games.  Especially since I couldn't watch the Royals or Cardinals.  I watched a few during my free trial and I kind of like their team.  Next I'll mention the rub-off or whatever it is.  I've seen other bloggers talk about these, but I've never had one.  Now I do.  Nice to have the Gary Carter on it, I wish I saw him play more. I also wish the Expos were still around.  Since its so flimsy, I'll keep this one in the penny sleeve.

Lastly is the Chase Utley relic.  I've always liked Utley somewhat, but never went out of the way to get a card like this.  This one is really nice I must say.  I also like the jersey style he's sporting in the photo.  I always preferred the darker red color for the Phillies compared to the brighter red.

Thanks again to Duck Packs for the awesome cards.

I think I'll post another scan too to clean my computer up before scanning more soon.  These are random ones I've gotten recently. 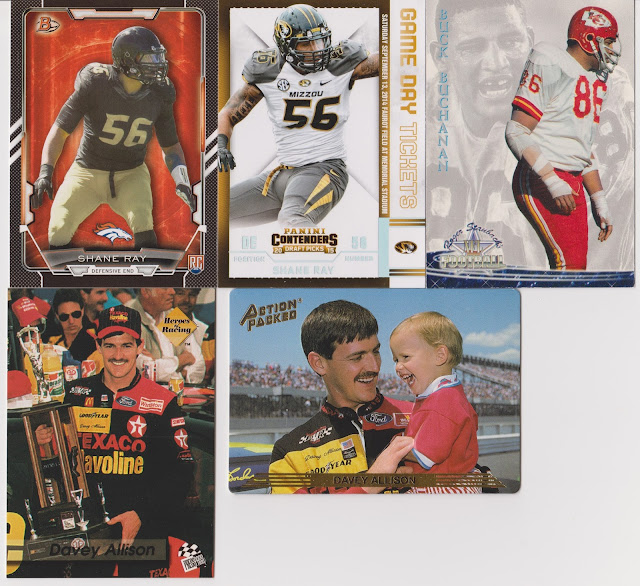 The two Shane Ray cards were given to me by my best friend.  I had cards for him, and he had extras of these two.  I've been looking for some good cards of Ray, and actually almost bought the Game Day Tickets one a day before.  Now to find the other Mizzou guys with cards in 2015 sets.

The Buck Buchanan card I won on Listia.  Simply labeled "buck"  I figured I'd bid if it was cheap and it was.  One annoyance on Listia is when people don't describe the cards or label them but if it results in me getting them cheaper that way, its a good trade-off.

The last two are of Davey Allison.  I've been buying them up a lot lately, but I really was a fan of his.  Allison cards don't fetch as much as Danica or Dale Jr. cards, but that's fine with me.  I will buy all the Allison cards if they are cheap enough.

So that will wrap it up for today,  I still have a few more posts before I am caught up, but I do like how I'm not pressed for a topic, so this is a bit fun.  Thanks everyone for reading, and have a great night.