Catching up on Listia and a MAJOR WIN!

I haven't bid on much on Listia much lately, mainly because I haven't been on the site.  So the good news is that I can catch up on all the winnings. 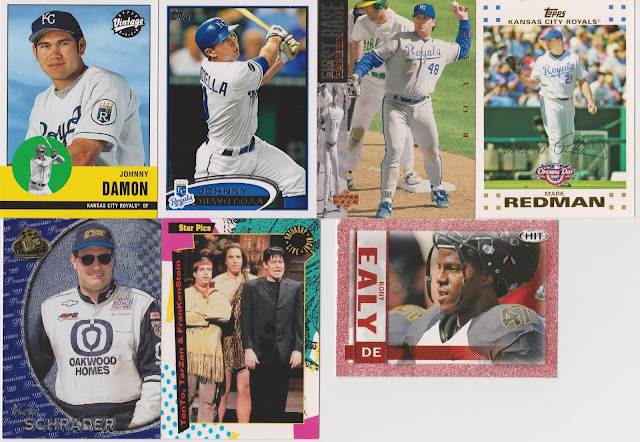 I won the Johnny Damon card dirt cheap, when I got it in the mail, the other three Royals cards were included.  I like sellers who add bonus cards.  The Damon is on that I needed, but I likely would have bid on it even if I had it.  I think it was under 100 credits.

The Ken Schrader card I got as it was cheap as well.  I wanted to add it to my collection of people from Missouri, even though I have a couple other cards of his.  I like this one as it shows his face so thats good.  When I got it, this card was a lot nicer than it scans and is a nice card for a Racing card.

Next is a Saturday Night Live card.  A lot of them popped up lately, and was a bit more than I wanted to pay, but I bid on it just because I remember the sketch, and think my sister would like it.  This is one of the few sketches I believe Phil Hartman broke up in.  It was always fun to catch.

Lastly is a Kony Ealy insert that I've eyed for a bit, and finally found one cheap enough to get.  Ealy was always one of my favorite Mizzou players and one I knew was primed for success before most people noticed.

The Madison Bumgarner cards I felt I showed already, but were in my scan pile.  They were two separate auctions, but both were real cheap.  I'm still mad at him for preventing KC a World Series, but when you find star player cards cheap, you bid.  The Donruss set has really grown on me.

I showed off a Jeremy Maclin card a few months back from the Clarity set, and didn't plan on buying others, but again, this was cheap and fits into my Chiefs collection, so I bid.  I didn't expect to win, but when I did I was happy.  I'll need to find something to store it in as its too think to put in a nine pocket sleeve.  I'm not ready to move my Chiefs collection to a box yet because its too small.  One day I will though.

Next is the most recent win I got on Listia, but also a huge contest win on Twitter. 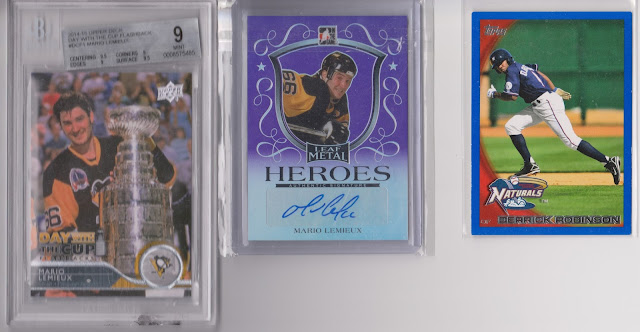 The Derrick Robinson card I won on Listia last week for I think 50 credits.  I think there was a mixup though because I was only supposed to get a base set card, but got an insert.  I haven't heard a lot from Robinson, but since he plays for the Northwest Arkansas Naturals, he's a Royal to me.  If I tried hard enough, NWA is only a 4 hour trek from my house, I could go see him play.  I could also save an hour and see them play in Springfield and see both the Royals and Cardinals AA teams.  I have plans of doing that one day.

OKAY!  I mentioned a while back I would stop entering contests for a while to spread the love.  I have been on a nice streak, and I think I entered this shortly before or after that announcement.  I made an exception that if it was a super awesome contest I could enter (I have only entered 1 or 2 since).  This was a huge exception because while I admit I'm not the biggest hockey fan, Mario Lemieux is a legend.  A twitter person named Hockey Cards held the contest, and I got it late this week.  Now I thought it was an autograph and a relic, but I'm still happy because the autograph is what I wanted the most.  The Beckett rated 9 card is lovely though.  My first Beckett graded card, and the plastic is thick.  I thought about popping it open, but I'm afraid I'd harm the card, so I'll keep it in the case.

The autograph was the one I wanted though.  In fact if it didn't include a signature I wouldn't have entered.  Hockey Cards (sorry for no link, trying to write fast before the laptop crashes), sent the cards and I didn't realize it was from Canada, so for the second time in a month, I've gotten a package from foreign soil.  Just call me Mr. International I guess.  That is unless Pitbull objects, than I guess call me something else.

That will wrap it up for today.  I alluded to laptop problems again, and I plan on doing a factory reset soon.  If I screw something up, I'll still have the desktop, but likely won't be writing daily.  Until I get the laptop back to normal, it will be spotty when I post new blogs.  Thanks for sticking around, and have a great weekend.