It's been a few days, and I think I will need to take action with my computer.  However, I won't neglect my blog so how about some cards.

Okay, so these might have been my nephews, I found them cleaning one day. Otherwise I have no idea how I got them.  That's not to say I don't like them.  The backhoe card is pretty cool.  The excavator card though, not so much.  A daylight shot would have been much nicer, however at least they are both action shots.

So what would be on the back of these card?  Well, look for yourself.

These are pretty cool describing the machinery and a nice touch to include the Ertl versions as well.  It may be a bit wordy for kids, but I think its much better than other cards I've seen so I might keep an eye out for these.  I think I know a couple places to get them, I just never go there.

Okay, how about some sports card? 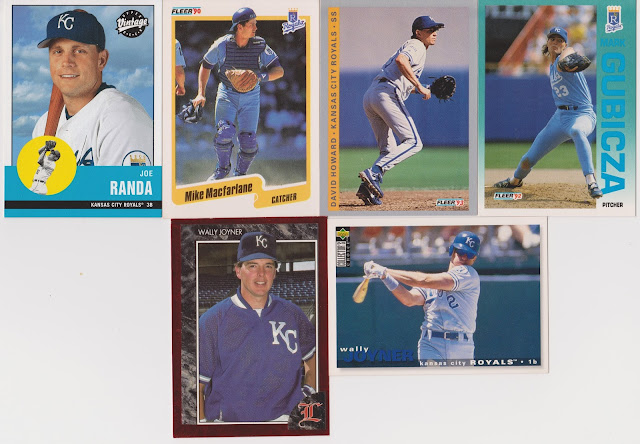 The top row was a Listia win over a month ago.  I only actually won the Randa card I think, but got the other as bonuses.  I believe I had all of them aside from the Randa, but free is free.  The Randa card itself was cheap, so the seller likely lost money in the deal.  I have a few of these Vintage cards now but this might be my favorite so far.  I love the sky in the background and while its not an action shot, it still looks good on cardboard.

The bottom row I also won over a month ago (in fact I haven't won an auction in almost 3 weeks because I haven't been bidding).  It was also cheap, and while I knew I'd get both cards, I only wanted the card on the left.  It was from a magazine or something, and I'd never seen it before.  At first I thought it might have been a Broder, but its legit.  Again, it was cheap and not a risk even if it wasn't a real card, so no loss either way. The card is much nicer in hand, but I'm not sure if I like the design or not.  The bordering is unique, a countertop surrounded by a picture frame is not my idea of a great design, but it has some appeal to it.

One last scan for today, how about another pack of 2015 Score Football?  I mean it is football season in some sense. 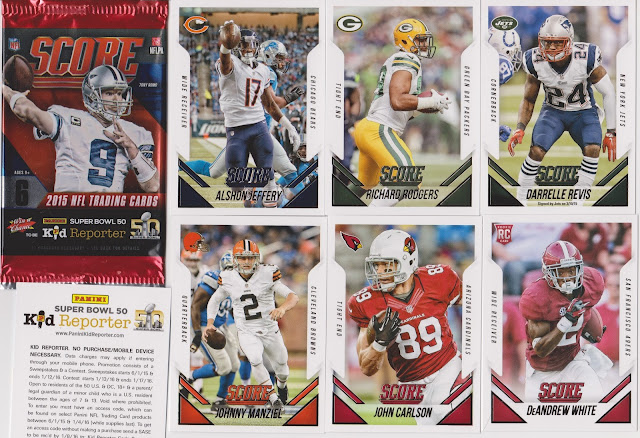 I got these just for a fix, and I'm indifferent with the results.  On one hand its nobody I collect, but I did pull a Manziel, so it almost evens out.  The design has grown on me a bit, and while I'm not a fan of die-cut designs I think this could make a decent parallel set with the white border removed.  I also one of those Kid Reporter cards.  I'm not sure how well that worked out last year, but it must have went okay if its back again.  It is a nice way to get kids back into collecting I guess, but it has no value for me.

That will wrap it up for today.  In my absence lately I have worked a bit on my lists, and sorted a few of my other collections as well.  I'm in the process of getting the rest of my cards all in one place, then havoc will begin.  In the end though, I will have a ton of cards to give out, starting with ones who have been gracious to send cards to me.  So even if I'm not on here as much, I will still be working on my collection.  It's good I got a nice desk when I did, or I would be totally lost.

Thanks for reading and have a great day!