Not as many scans for the 1972 Street & Smith Baseball magazine so I'm adding something else to this post.  More on that later.  This issue didn't have a cover so I don't know who it was on this cover, but here is what was inside. 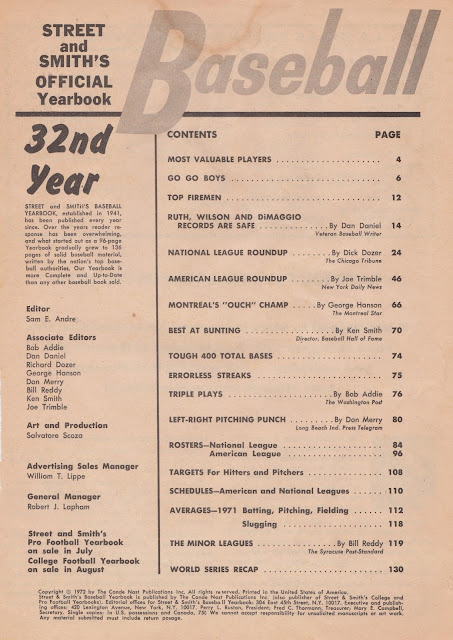 Not much to say about this, but it was in essence the cover since the actual cover was missing.  It is nice to see a nice thick book just for baseball, but back then it was still the #1 sport, so it made sense. 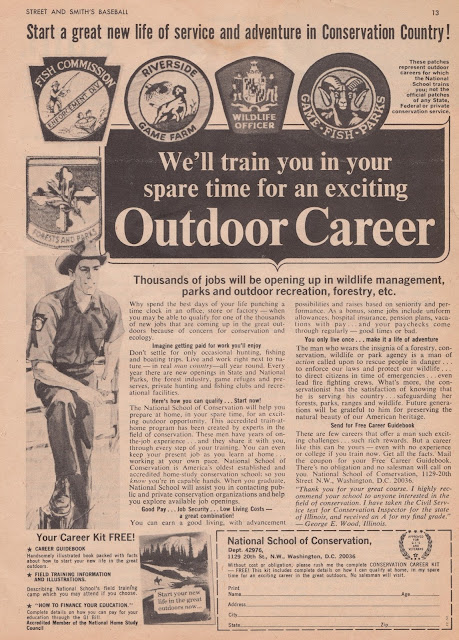 I'm not real sure why I scanned this, but I thought it was cool so I did.  I'm not an outdoorsmen, but at times I wish I was more of an outdoors person. 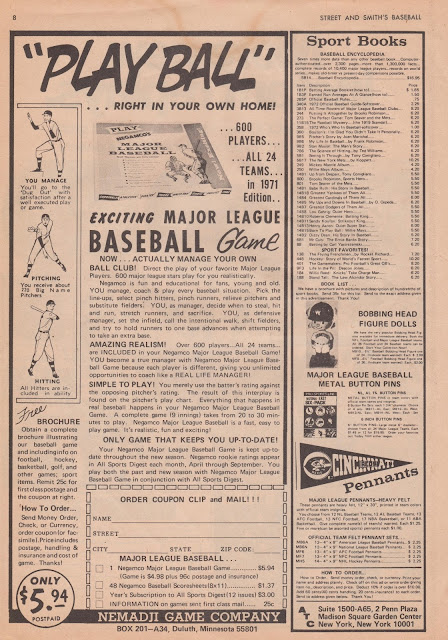 A little bit of everything for sale here including bobbleheads and pennants.  I have a couple bobbleheads, but have a few more pennants.  I actually prefer pennants more and would like to get more even if I have no room.  I need to get a Royals one.  I found a bunch of cheap ones a while back but they were Braves, Cornhuskers, and another team I don't care for but I still got them.  I don't have them in front of me or else I'd take pictures. 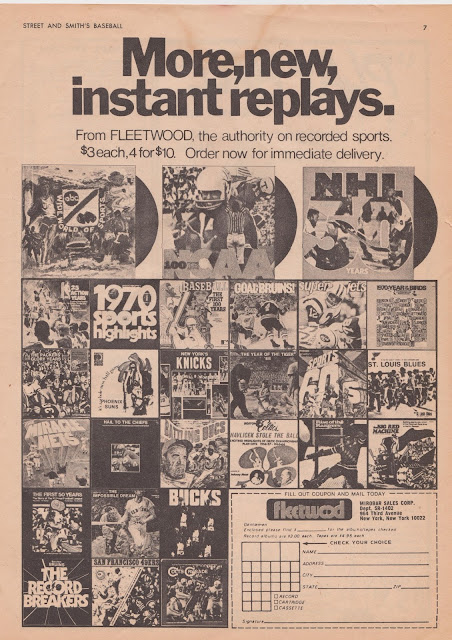 More records.  These scans are a little underwhelming I must admit.  I didn't scan any of the articles or the roster for 1972, but probably will on future ones.  I just wasn't impressed with this issue.

Since it was a weak issue, I decided to show off a scan of stuff I found recently in a box at my house.  I've been cleaning some and came across random stuff and here is what I found. 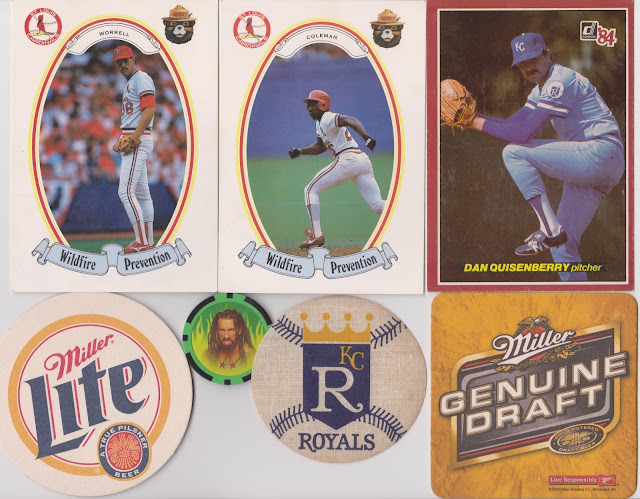 Jumbo sized baseball cards.  The first two are of St. Louis Cardinals by way of Smokey The Bear.  I'm not sure if my dad had these or not, but at some point they came into my hands.  I'm not sure what to store these as they are too big.  I might try to put them in a sleeve for photos but not sure I have any extras.

The Quisenberry one I will store in the Royals box I have or make a small box for other Royals cards.  I'll figure it out later.  I'm glad I found this.  Looking at those old magazines, Quiz doesn't get the respect he deserves as a closer.  He was the man for many years, not just in Kansas City but the leader of the American League, he deserves more credit.

The bottom row has a couple beer coasters which I bought a few years back at Cargo Largo.  It was like 100 or 250 for like a buck or something and while I don't drink, I kinda liked them so I got them.  I still have a ton of them, but not sure what to do with them.

Also found a Royals iron-on patch that looks cool but I'll never use.  It will go in that Royals box whenever I make it I guess.  As a project in FACS class (Home Ec for older readers) I was going to sew a vest together and put patches and such on it, but I never finished it.  It's amazing how many projects I never finished in that class yet passed it.  Sewing wasn't my strong suit though, but I liked doing some of the other stuff.  My favorite was The Hottest Soup EVER which my friend and I just dumped the hottest stuff we could find in it.  We got an A but I think my friend and I was the only one who actually tried it.  Too bad I didn't actually have a list of ingredients.  Though my best thing I baked was a Twinkie Cake which still gets rave reviews.

Lastly is a WWE Chipz um... chip or magnet or something of I think Tyler Reks.  I liked Tyler Reks, but he never panned out.  I think this might be one of my nephews, I'm not sure.  I might have another one or two.  I never got into them.  I did like the old baseball coins Topps made though and have a few recent WWE ones too.

So I guess thats it for now, thanks for reading and I have a couple more issues scanned already so I hope to crank them out quickly but I won't guarantee it.  Enjoy the upcoming week.