A while back I bought a few magazines from Savvy Seconds.  They were a quarter a piece and I only bought them to cut some stuff out and to toss the rest.  After doing that to a few before I tossed them I decided to keep them in case I needed to wrap stuff.  The books set me back $2 which isn't bad, but none were it real great shape.  They were old however, so some held up better than others.

Did I mention they were old Street & Smith's?  Today I will show a few scans from the 1973 book.  To be honest I wasn't super impressed with it, but with all the information I can find on the internet, this isn't like it was all new information to me.  So here is the scans. 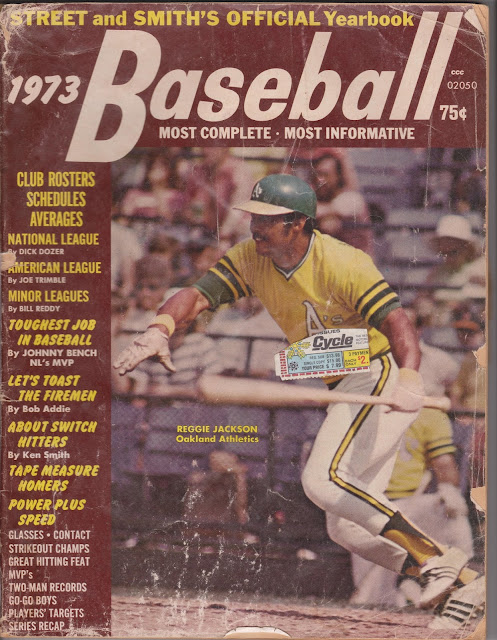 Hey, at least it had a cover, unlike half the other ones.  The Cycle sticker thing was indeed on the cover when I got it. 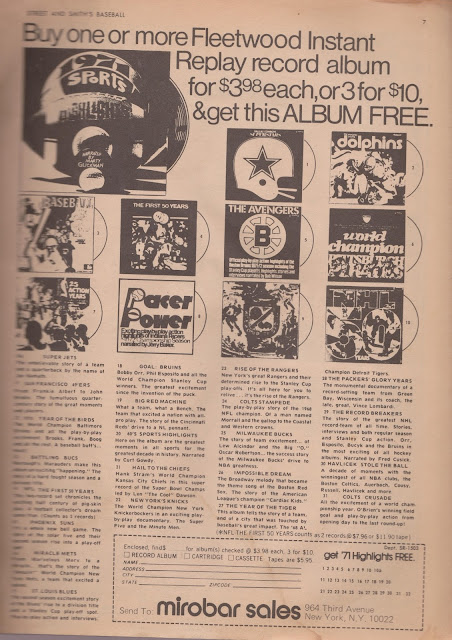 This looks pretty cool, I have seen one or two of these online, but never in person.  I have seen a couple Marching Mizzou records before though.  The day I scanned this I happened to have The Facts of Life on and Blair mentioned one of the roommates in the sorority was listening to the 1975 Daytona 500 album non-stop.  Jo replied "the second side is pretty good".  I liked Jo I think the best.  Anyways, if I had the room and found some of these I would likely get some of these. 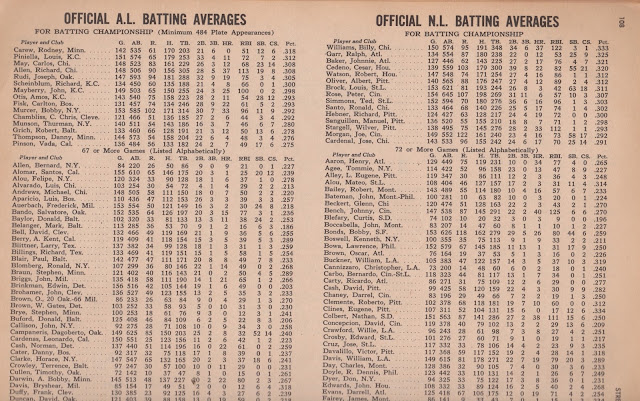 Look at this list of names.  Also some pretty amazing number too.  Last night during the ALCS the announcers mentioned Jose Bautista was a Home Run hitting machine.  He does hit a lot of home runs, and I like him, but it showed his batting average was .250.  That isn't something I would brag about.  It seems lately though a .300 hitter is fairly rare, which is a bit sad, but at least it usually means better pitching, which I am a fan of. 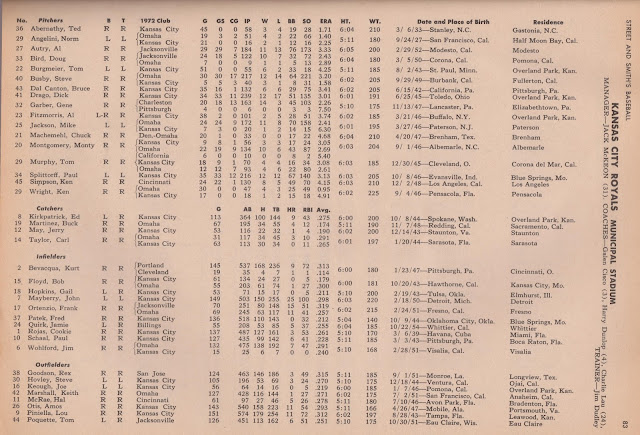 In the words of Rube Baker in Major League 2 - "Check it out man, I'm on the rooster!"

Its refreshing to know that I know a lot of these names, and the ones I don't I hope to know once I get their cards.  My focus isn't really on cards from before I was born just yet, but eventually I do want to get them.  At any rate I do need to get more John Mayberry cards, he was a nice guy when I met him. 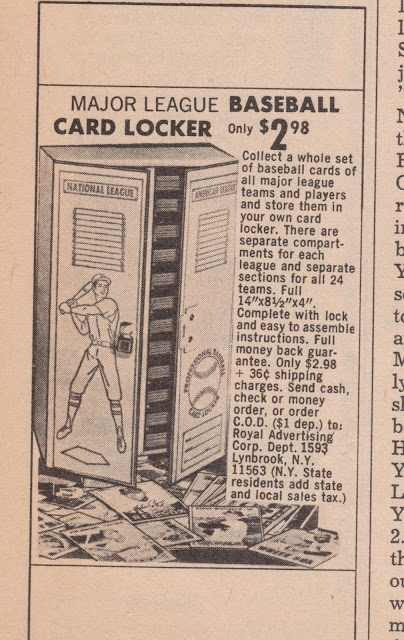 I never had a locker like this, but it would have been cool to have as a kid.  Today I don't think I could fit many cards in it.  Now that I think about it though, I have a full size plastic locker somewhere that I could use to store cards.  I might have to look for that and use it.  I can put a lot of cards in there. 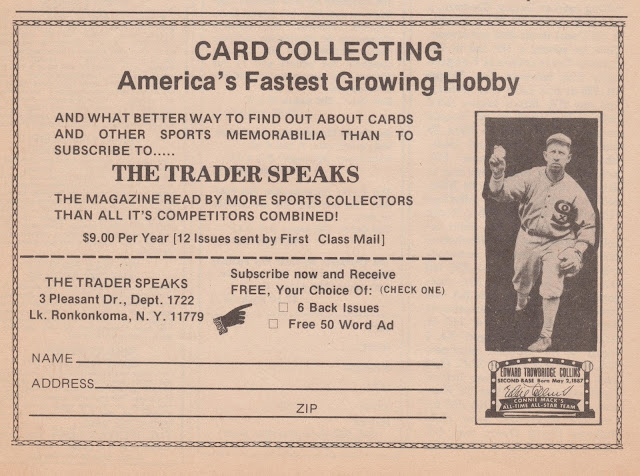 I don't think its the fastest growing hobby anymore, but it would be nice to see new collectors and the hobby get a resurgence.  Instead of people ripping packs just for relics and autographs.  As for The Trader Speaks, I never heard of it, but I might look into it and see if I would have liked it.

Okay, so I have one final scan for today.  I still have quite a few left to show, but only a couple scanned, so you might see more popping up soon. 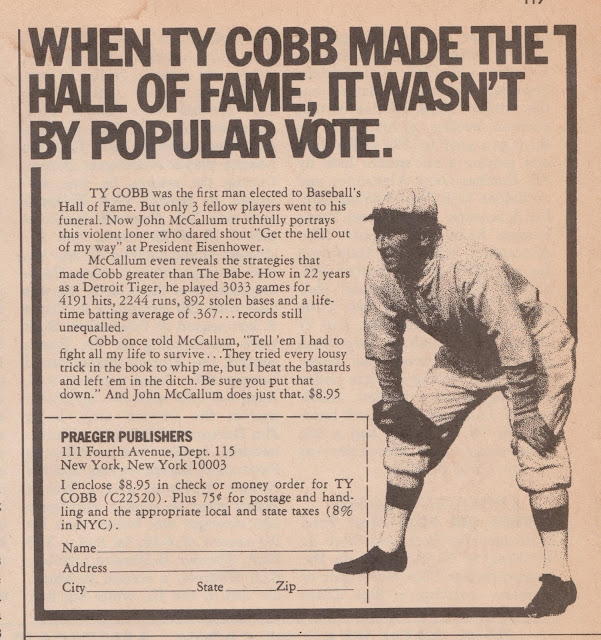 This really caught my eye when I first saw it.  Is this stuff really true?  I've always heard he wasn't the nicest, but I don't know if I ever heard actual stories.  This sounds really interesting now.

So I guess that wraps it up for today.  I haven't been talking about the Royals in the ALCS or the playoffs in general for a couple reasons.  Mainly due to the fact that most of the games is one Fox Sports 1 and I don't get the channel.  In fact last night's game on Fox is the first game I think I've seen them play this postseason.  I've seen the NL games a few times, but none of the Royals.  Even the radio has missed a couple games so some I was completely left in the dark in.  The other reason I haven't wrote much about them is despite not seeing much of them this postseason, I am just trying to enjoy it as a fan and not trying to come up with posts to write for each game.  I enjoy making the posts I did last year, but this year I get to enjoy other fans tweets pre game and Facebook fights with Cardinals fans a bit more since I'm not scrambling for content.  Game 2 is about to begin, so I'm going to go, but I hope to write some more soon.

Thanks for reading and have a great weekend.  I hope your team or teams do well in whatever sport they play as long as its not the Blue Jays (no offense, but I want my Royals to win!) and as for the NL team, I have no real favorite, as I just didn't want the Giants, Dodgers, or Cardinals to make it.  Even if Toronto wins I'm happy because I can be happy for whichever team wins it all now.