I'm writing this in advance of getting dental work done.  I don't normally pre-write blogs, but figured if I wanted to stay on track with writing one each day to end the month, it might be best.  By the time you read this I should be fine, as I will schedule it late and post it earlier if I remember.  In the meantime, let's get to today's post.

I mentioned I'm not big on Garbage Pail Kids cards, but I've been buying some packs partly for the Presidential cards, and partly to fill a card fix I have.  I think I'm done with GPK, but might as well show off what I did get.  Maybe I'll buy more, or even find some on Listia, but for now, these are what I have. 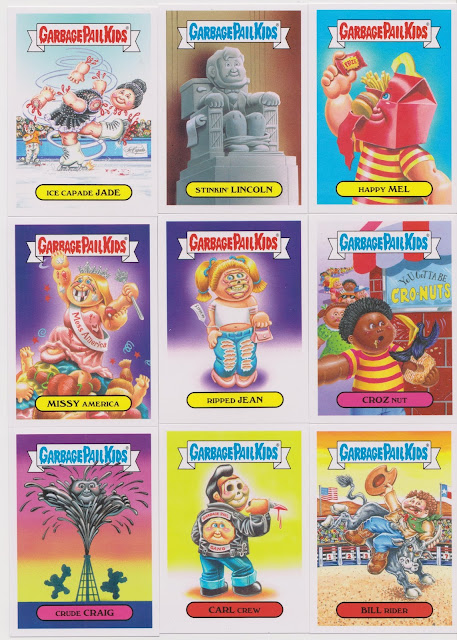 I don't have much to say about any of these to be honest, I just needed to post something.  The Missy America is kinda cool, same with Happy Mel.  The other Stinkin' Lincoln is nice to have too.  This one much nicer.  Not a bad pack.  I'll show the variation card in a minute. 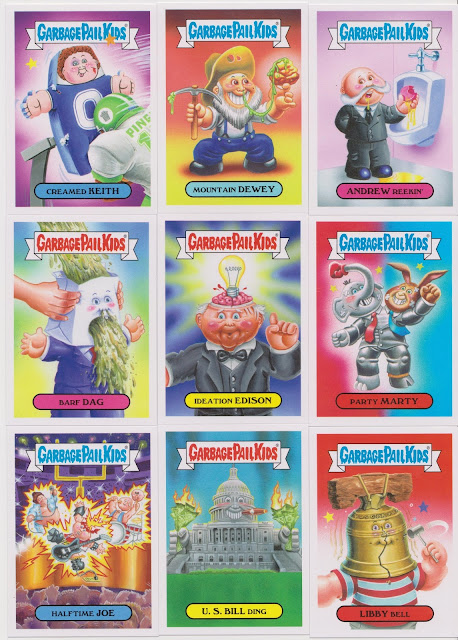 Mountain Dewey and Libby Bell are my favorites here.  Though this pack did have better cards.  Could have done without the Barf Dag one though.   This might be my favorite pack I've gotten so far.

Here are the variations for both packs, I forgot which went with which pack. 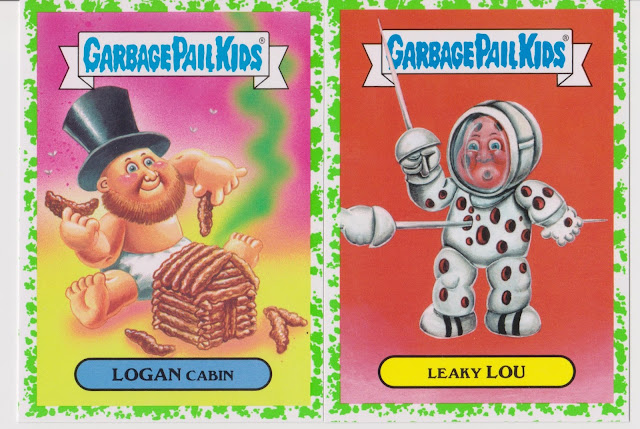 There's that one again!  This is under a different name and a green variation.  I guess they have two different names for each card.  I don't follow enough to really know all this, but I guess its cool to have both versions.  The Leaky Lou one is okay I guess, I just don't care for it. 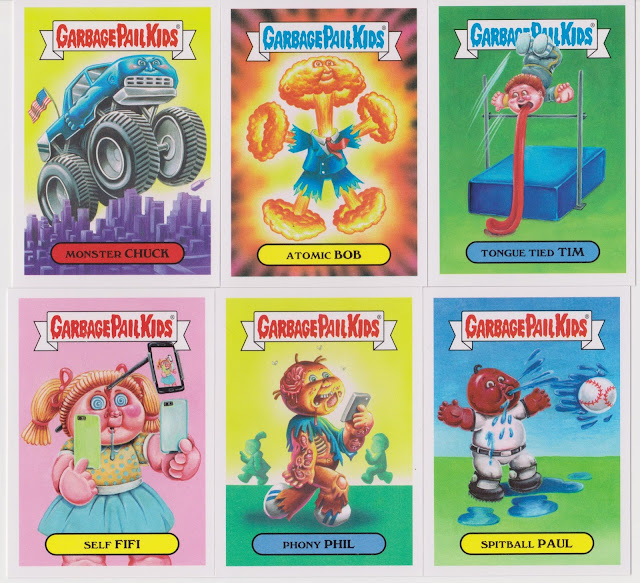 I bought one other pack, and this one wasn't bad either.  I like the Spitball Paul, Phony Phil, Self Fifi ones.  The Monster Chuck one is nice too, but it doesn't really stand out.  Overall another nice pack.  Here is the rest. 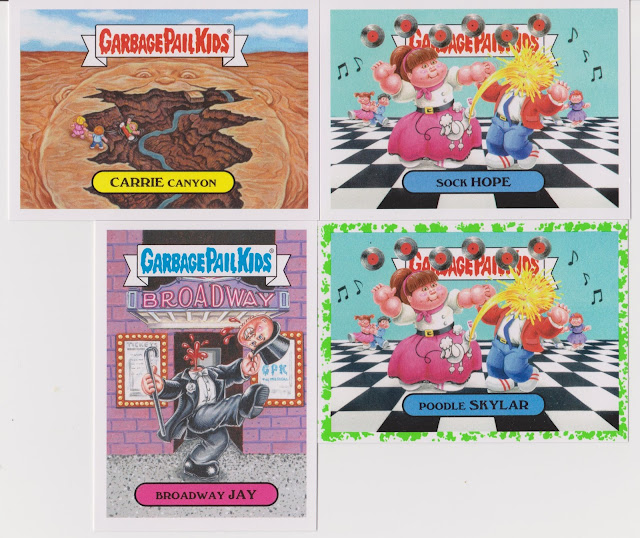 Sock Hope and Poodle Skylar in the same pack, one a variation. That's kinda cool, but its not the best card.  I don't fully get some of the cards though, so some go over my head or just don't make sense.  The Broadway Jay I get rhymes, but don't know why he's decapitated.  Oh well.

Overall not bad cards.  If I had a checklist on Trading Card Database, I'd add what I have and see what I have left.  I don't want to be the one to add the checklist because the numbering on these cards are screwy and I don't want to mess it up.  Once its added (it might be haven't checked in a few days), I'll scan and add the cards to the base.

I also got a couple other packs of "silly cards" recently on Listia.  Originally I planned on giving them to my friend for his birthday, Happy Birthday to the proprietor of Talkin' Truman on Facebook (his spring game pictures are amazing), but kept them instead.  I still need to find a gift for him.

These are troll cards if I ever saw one. 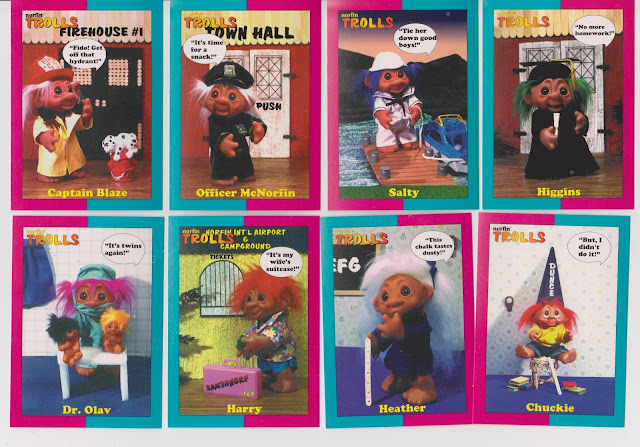 These were cheap is excuse number 1 I give for why I actually bid on them.  However as plain as they are, the set isn't too big so I could see myself bidding on more if they are still cheap.  The packs were randomized though which was odd.  Pack one had cards 1-6 or something all in order, and the second one had cards 13-18 or to some extent, again all in order.  That's nice when seeing what you have, but sucks when buying blind packs as you'll get all new cards or all doubles.  Oh well.

Not sure what to say about the cards themselves though.  They are pictures of toy trolls in front of things.  I guess its ok, but nothing real spectacular.

Here is the rest. 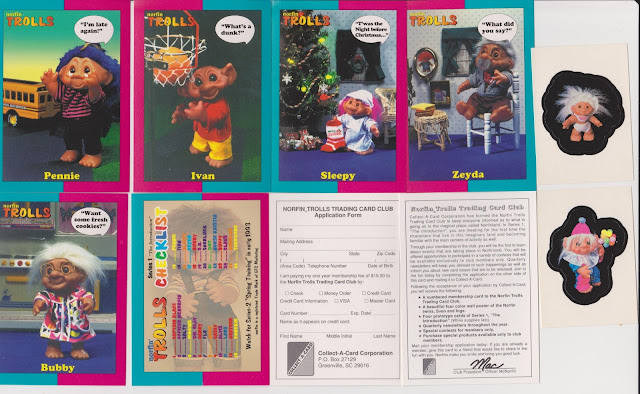 More of the same, the checklist might be the back of all the cards I can't remember.  Also got two stickers, but I don't really plan on using them.  I would keep them on card, but they are really small (like a cracker jack prize size) so they could get lost easily.  I might keep them on there.  Also included in each pack was an application form for the Trolls Trading Card Club.  I showed the front and back in case anyone wants to join.  I doubt they are still taking applications as these are 25 years old, and I think this was the only set they made.

Not real flashy, but like most companies in the early 90's Collect-A-Card was trying to cash in on cards of whatever was hot, and they tried their hand at this.  It really shows they made cards for anything.

In some ways I guess they still do, but with limited shelf space at places like Walmart (at least in my store), I don't see too many non-sports cards anymore. Its usually a couple boxes of whatever is in season, and a ton of Pokemon and Magic cards.  Sometimes I see Walking Dead metal tags, but not a lot.  They show a box of wrestling cards too sometimes, but not a lot.  Maybe when I get time and feel better I might make a trip to the closest card shop.  I might do it during the next card show and knock out both at once.

That wraps it up for today.  I've scheduled this for late at night so if its posted earlier then I am feeling fine.  If its posted late, it just means I'm not up to doing much online (it might be best to stay off the internet today if I'm on something), and hope to be back to normal on Friday.  If for some reason I don't return Friday, have a great weekend.  Thanks for reading!