Random Rumblings from the Sports World

The big talk today is about Alex Rodriguez.  He showed up to spring training two days earlier then many expected.  I'm sure the Yankees were like the party goers in the early scene of Wreck-It Ralph (IT'S A-ROD, SOMEBODY GET RID OF HIM!), sorry I watched it a couple times this weekend, not a bad movie.  Anyways, he was bombarded by the media wanted to talk to him. 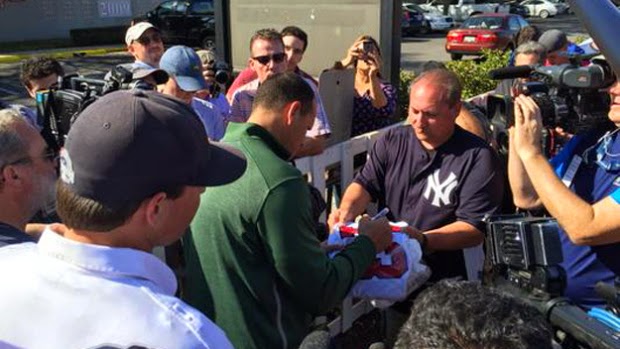 I don't feel sorry for athletes much.  This is no exception.  As an athlete I believe the media has a duty to get the latest (not when they are eating or stuff, but at the ballpark or media days).  I'm sure A-Rod expected this, and probably came early to avoid more media.  Anyways, I was watching video from ESPN and they asked him everything under the sun.  From the chopped video they showed, he said all the right things.

Now if you believe him or not is up to you, but the way I see it, he is another year older, and likely another year wiser.  He had a year to reflect on all his mistakes and prepare for his final shot at staying in MLB.  Now it is all up to him on how he responds.  He will be rusty and the Yankees could dump him, but I would like to see him play again somewhere (maybe not in Kansas City, but somewhere else unless he agreed to a small no-risk contract).

What will make it tougher for him this year if the Yankees keep him is the fact that Derek Jeter won't be around.  Jeter still being around would have caused the media to split a bit more between the two, allowing Alex a better chance to transition back.  I believe one of the reasons Jeter retired last year was to avoid the circus this year.  He didn't want any part of the firestorm Alex will bring.  Also having Jeter they would have helped A-Rod more with them being teammates so long.  Now it seems Alex will have a us against the World mentality because not too many will be in his corner.

Will Alex Rodriguez be able to return to past greatness or will he wilt like a dying flower?  Time will only tell. 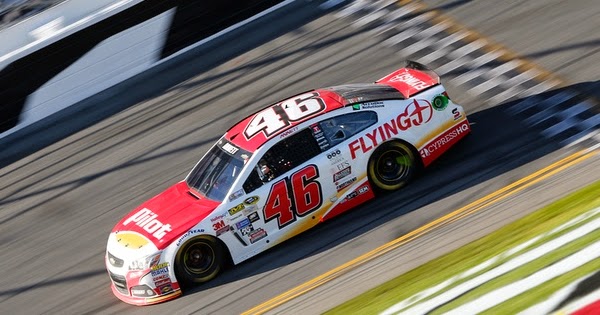 Moving on, a lot of storylines were made heading into the Daytona 500 yesterday.  Would Jeff Gordon win from the pole in his final start at the biggest race of the year?  Could Tony Stewart or Carl Edwards finally win the Super Bowl of Stock Car Racing?  How would Regan Smith and Matt Crafton fare as replacements for the Busch brothers?  Who would breathe on Danica's car causing her to crash?

Okay that last one is a bit harsh, but some of the analysts I think are starting to realize the success or failure of Danica now falls on Danica herself.  They didn't spend the whole race talking about her, and it made it better.  The Gordon talk was a bit much, but it was justified.  In the end, I was happy with the finish.  I rooted for three drivers yesterday, one who I thought had a good chance of winning, and two who I just wanted to finish in the top 15.  The two I wanted to mention first are Michael Annett (pictured above), and Sam Hornish Jr.  Annett drives for Pilot/Flying J and I am loyal to the brand.  Hornish I have followed for a few years and was upset he didn't have a ride last year.  It was great to see him have a full ride this year and at the top level no less. 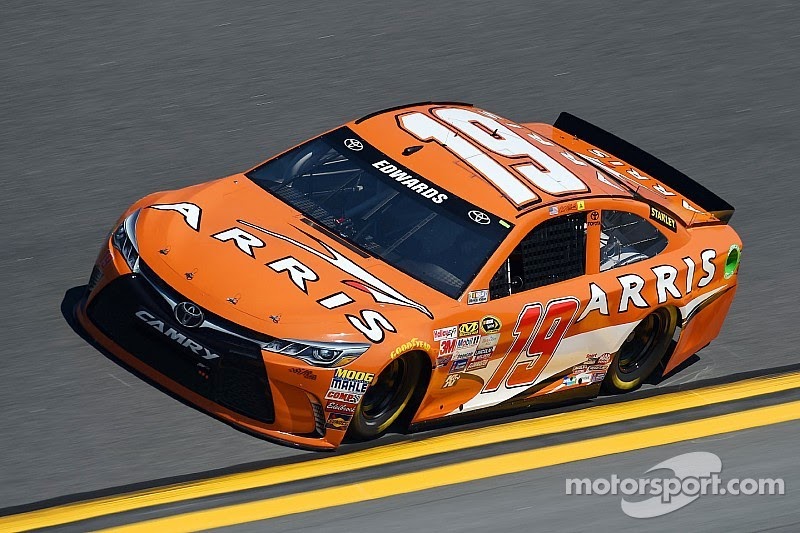 The other driver I rooted for was Carl Edwards.  With a new number, sponsor, team, and now with Toyota, King Carl had a real good shot of winning.  I root for him on occasion because he is a local guy and I like him better than most of the other contenders.  I'm still getting use to the new paint scheme and the number #19, but it shouldn't take long to accept it.

In the end my only complaint was the timing of the commercials and I'm still not a fan of red flags so often.  I understand its for safety, but I think it takes away from the race with stoppages as often as they do.  I know they only did one yesterday, but it was within the last 10 laps and it caused a reset that made the finish a little less exciting.  My thoughts on red flag stoppage's not involving weather can be summed up easily...

The final topic I will discuss today was one I was shocked at last week.  Kevin Garnett is back in Minnesota!  I have stated for the most part I never had a official team to root for in the NBA but in the late 90's Kevin Garnett was one of my favorite players.  So much so that I started to root for the Timberwolves.  It didn't hurt that I liked their jerseys too.  However they never contended, so when KG went to Boston, I followed him and rooted for the Celtics.  Since then, the T-wolves have become an afterthought. 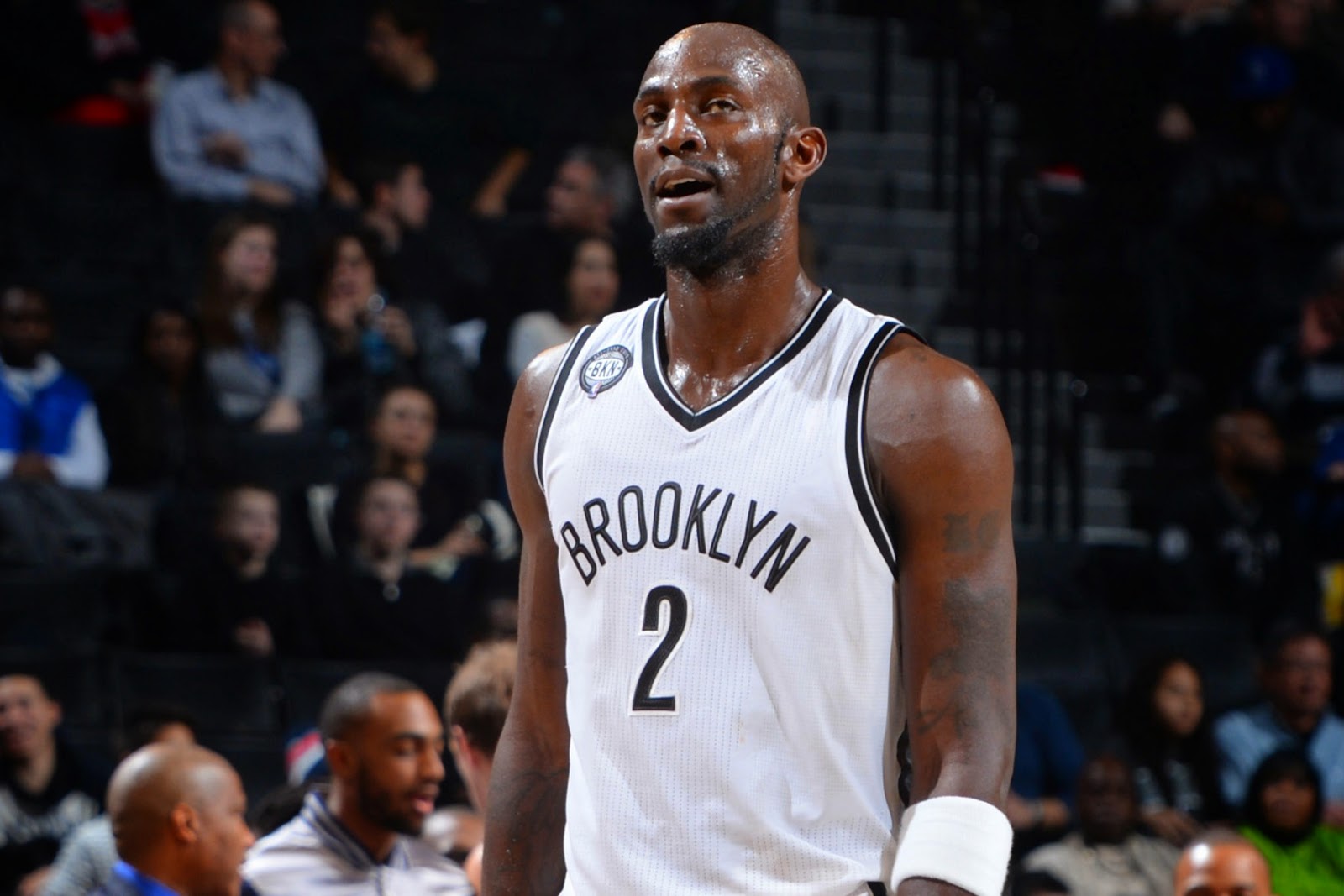 After he went to Brooklyn, I lost interest in him for the most part, and this year I have been rooting for De'Marre Carroll and the Atlanta Hawks.  However things could be changing soon.  IN A BIG WAY!

The rumor mill is saying that Kevin Garnett wants to BUY Minnesota!  Well, not the state, but the team.  The story is him and Flip Saunders wants to buy the team.  If that happens, I may have a favorite team.  I think it will be a great spark for the team, and could be a turning point in the franchise.  I haven't followed the NBA a lot in the last few years because I'm not a LeBron fan, and the Heat winning all the time didn't interest me.  This year has been odd though.  Atlanta and Golden State are the hottest teams, the Heat are stumbling, Cleveland and LeBron started slow, Kobe is done. The NBA is going through a transition soon.  Kobe should retire soon.  LeBron's best years are behind him and the league needs a new star.  There are many options and things are looking brighter.  The Spurs are also about to change too.  Depending on the health of Chris Bosh, the Heat aren't what they use to be.

All that being said, there is no dominant team in the NBA, and that is causing a lot of excitement.  So how does that bring excitement to Minnesota?  It allows them a couple years of staying out of the spotlight and create a buzz in Minnesota and then exploding just like the Clippers and Warriors have done recently.  A league with parity will always be more exciting then a league with the same teams winning all the time (which is why MLB has been better lately as the Yankees aren't as dominant).

I can't wait to see things change in Minneapolis and give their fans a chance to see a quality team for the first time in years.

That will do it for today, thank you for reading and have a great night.