Breaking in the new Dollar Tree

In a previous post I mentioned a new Dollar Tree opened near where I live.  I like the store and will probably be back there soon enough.  However, and I hope its just because they are new, their card selection is very minimal.  As a result I only bought 2 repacks, both from the only sports box they had- 30 cards from all-sports.  I usually pass on these, but figured if people bought a lot (or even any) they would expand the selection.  Anyways here is what I got from the two packs.  I didn't scan all of them, but about half from each. 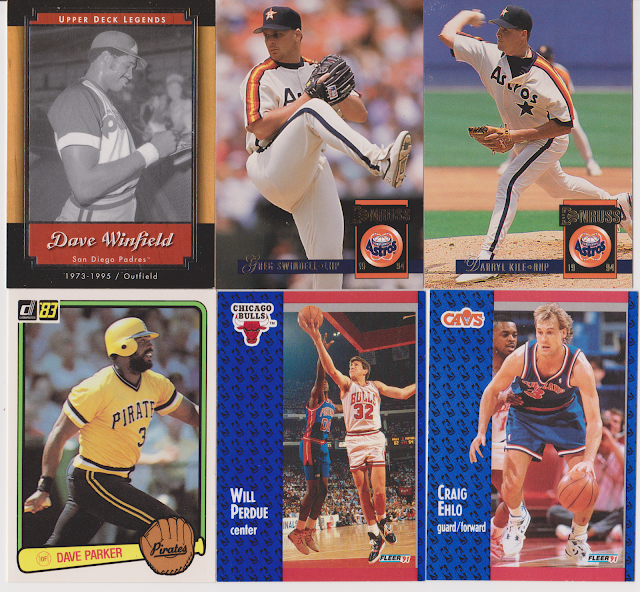 I didn't look at who was on top of the packs this time, I didn't see them until checkout time, so I just grabbed a couple.  The Dave Winfield was a nice pull I thought.  So was the Dave Parker, which I love that color scheme.  A couple Astros from the same set, glad I got a Darryl Kile, though I have others of him.  Also a couple basketball.  White guys playing basketball, at the height of White Men Can't Jump no less.  I remember seeing Will Perdue play on TV, though not sure if I ever saw Ehlo play, thought I heard of him.  I have a Cavs hoodie from this time period, but not wearing it now since I don't want to show support to the current team (they just beat the team I was rooting for- the Hawks). 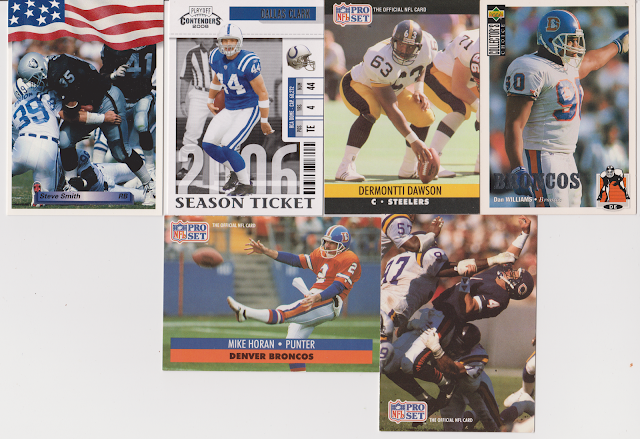 Let me say I hate when people say 'Merica, it sounds so disrespectful.  However if one card represented that sentiment, it would be this set Steve Smith is on.  A close second would be the Stars & Stripes set around the same time (maybe a few years earlier).  I picked the Collector's Choice card because I thought it looked odd.  I guess its because I was use to the signatures on the cards and not a huge BRONCOS at the bottom.  I also got a lot of Pro Set cards.  Nice to pull the Dawson one, and a nice Punter card displaying the old Broncos logo, which is nice.  The other one depicting the Bears being mauled, I just thought was a funny looking card.

Overall, the Parker and Winfield slightly win out, making it worth it to me.  Okay, pack 2. 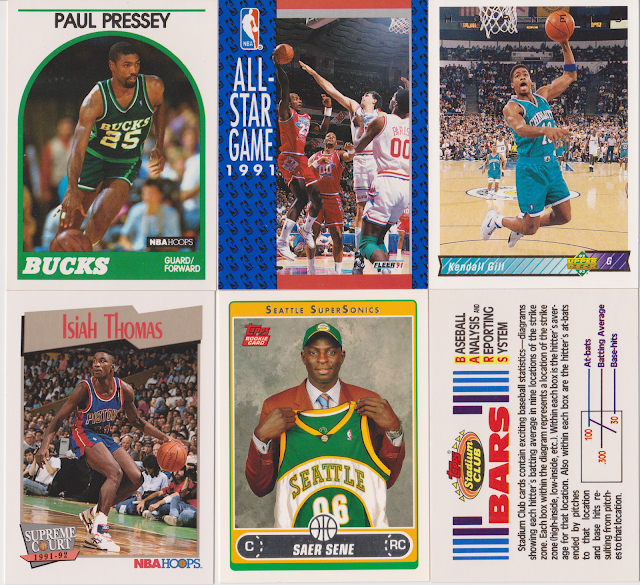 First card I pulled was the Paul Pressey.  I will tell you right now, this pack was worth it.  My first one of him, and it made me happy.  I never saw him play, but his kids, Matt and Phil went to Mizzou and all we ever heard was how his father Paul was in the NBA, made him out to be almost as good as Jordan.  Phil is now in the NBA with Boston, and I have one of his cards, so I might place them together even though Paul didn't go to Mizzou.  Still, a nice one to pull.

Speaking of Jordan, I pulled a Jordan card.  Not my first time, and not one that got me too excited, but at least its a name.  Kendall Gill I was happier to pull, because I liked watching the Hornets play in the early to mid 90s.  I think mainly because of the team colors.

Isiah Thomas will never be one of my favorite players, but again, glad I got some names in this pack. One of the only cards I have of him, though not one I would ever pursue.  Next is Saer Sene, talk about name value!  Ok, I never heard of him, and that Seattle jersey looks horrible.  Next is an old insert card that actually counts as one of the 30?  At least I got a Pressey, Jordan, and Isiah in the pack so I guess it evens out.  Unless something really cool is in the pack. 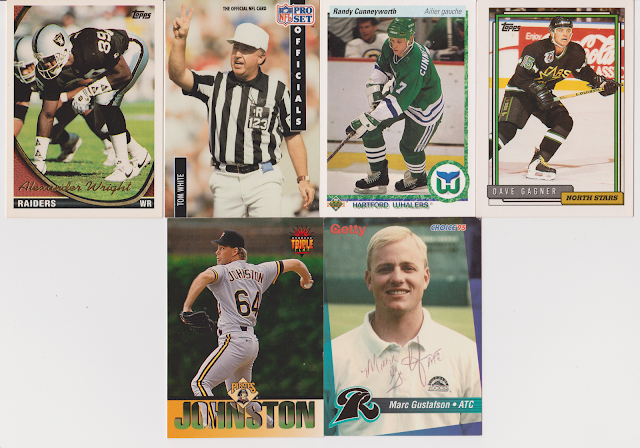 A GOLD CARD OF ALEXANDER WRIGHT!  THAT MAKES UP FOR THE CRAPPY INSERT!  Ok, my sarcasm is a bit rusty, but still a gold card is still a nice pull in any repack even if it isn't a big name.  A referee card too, which I'm not complaining about.  With so many useless inserts these days I wouldn't mind an insert set for referees.  Just imagine the market for an autographed Ed Hoculi card (I likely butchered his name, but wouldn't have if they had a card for him in a current set).

Whalers and North Stars!!!!!!  Teams I miss dearly in a sport I hardly ever watch.  I know hockey fans are everywhere, but I still think hockey shouldn't be played in places like Florida, Texas, Phoenix and southern California.  I was really happy when the Thrashers moved from Atlanta and reformed the Winnipeg Jets.  Again, not a hockey fan, but I would root for the Whalers every year if Hartford still had a team.

Joel Johnston isn't a name to excite many, but I loved this design from Triple Play, so I liked this card.  If I ever built complete sets, I would like to chase down those 90's Triple Play sets.  They always appealed to me likely because they were cheap.

Finally is... Marc Gustafson, a trainer for a minor league team... and it has his name on it... wait, IS THAT AN AUTOGRAPH?  It's not everyday you see an autographed card in a repack, less likely one in ink pen form, and to boot, one of a trainer.  Could it be he really signed it?  If the answer is yes then this is AWESOME!  He may not be famous, but an autographed card in a repack.  IF NO, then this is AWESOME!  If he didn't really sign it, then someone forged it.  They didn't forge a big name like Derek Jeter or Mike Trout, they forged an athletic trainer for a minor league baseball team.  That would be cool and sad at the same time.  Either way it is a win.  I think its real, and its spectacular.

Thanks for reading everyone and have a great night.