What About The Game?

I mentioned a couple weeks ago that I went to a Royals game.  And it was rained out... I have described almost everything about the day... EXCEPT THE GAME!  Well a rain delay prevented me from seeing it, but I got a ton of pics from around the stadium that day including the Hall of Fame.  If you follow me on Facebook you might have seen them, if not, you are in luck.

Now I took too many pictures to post them all here, so the best thing to do is just share that link and let you see for yourself.  However not all the pictures I took made it into the album.  So I thought I would share them on here.  Nothing impressive, but a little incentive and insight into what I think about when I walk around a rainy stadium hoping for the game to start. 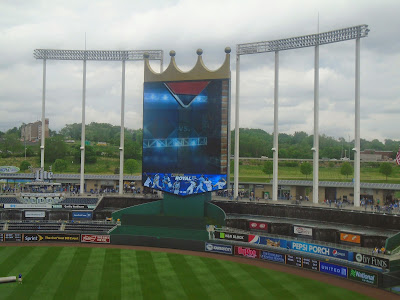 This photo is from the approximately 7 minutes we sat in our seats if it was even that long. 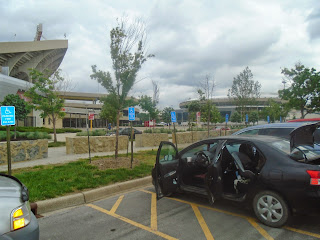 The focus isn't supposed to be on the car, the focus is for those who haven't been to the Stadiums in Kansas City called the Truman Sports Complex, just how close the two stadiums are.  We parked in front of Arrowhead Stadium and was still really close. 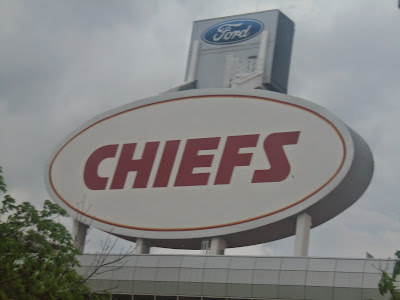 I usually get a good shot of this jumbotron when I'm inside Arrowhead, so I thought I'd get a good one while outside the stadium. 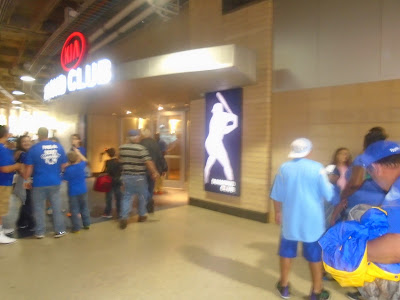 Made it inside the stadium and the idea of this photo was to take a picture of the batter (as shown).  It was one I liked so I took a shot.  It was a scrolling image, so I think I timed it good.  That is an entrance to the Kia Diamond Club, one of the few spots my friend and I didn't get to explore.  Maybe next time. 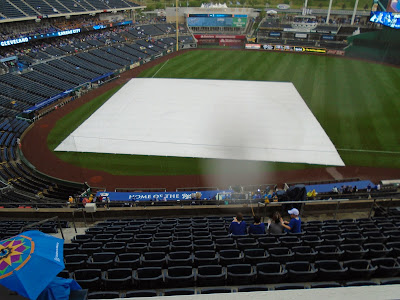 This wasn't from our seats, but after it started to rain.  When we first sat down, the usher told us it was about to start raining.  The grounds crew just finished putting the tarp down.  What was amazing was that it was "Kids Day At The K" an annual event where kids from all over come in as school groups and before the game have all kinds of events like science and other learning events.  That started 3-4 hours before the game was to start.  All of the events went off without a hitch.  In fact they wrapped up as we were parking.  It was timed perfectly for the kids, and while many schools had to leave before seeing the game, quite a few stayed (including my local school) who got to see a win. 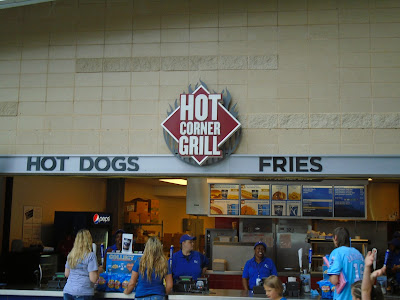 HOT CORNER?  That sounds like a blog!!!!  This was the closest eatery by our seats.  However if you've seen me discussing it or even the media, I would not recommend eating at either Stadium at the Truman Sports Complex.  While I ate at both last year with no problems, it was later revealed there was a plethora of health code violations and to this point there still are.  I planned on getting a souvenir cup and soda at the game, but didn't.  Even that was a risk.  I hope it is corrected soon because Hot Dogs at the ballpark sound great right about now. 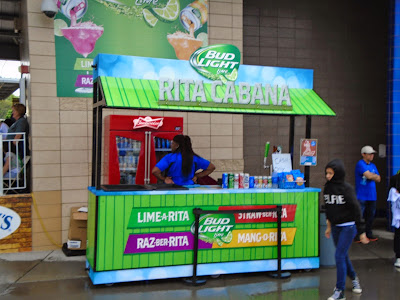 Now this stand might have been safer as I don't think it was run by Aramark who runs most of the stands.  I was questioned why I would take a picture of this stand when I don't drink.  The answer isn't a great one but here it is.  I thought it was funny they had a stand at a Royals game.  On the last season of Celebrity Apprentice, the groups were tasked with doing a commercial for the new flavors (the besides the Lime-a-rita).  On one team was Johnny Damon and Ian Ziering.  Damon of course a former Royal (and the main reason I watched) created a tune for his team, so it ties into me taking this picture (YES, I'm a dork).  In the end, their team lost.  Since Damon came up with a lot of the stuff on the task, he was fired.  However before that, Ian argued that if they used his tune they would have won (and basically everyone laughed at him).  He wanted a song done to the tune of La Cucaracha.  Even Trump said it was horrible, but Ian was being a... Ian and put himself into a position where he got himself fired.  So it sucked Damon was fired, but so was Ian, so it was a bit easier to swallow.  So now you know why I took a photo of this when I should have just passed it without batting an eye.  Sometimes I think too much. 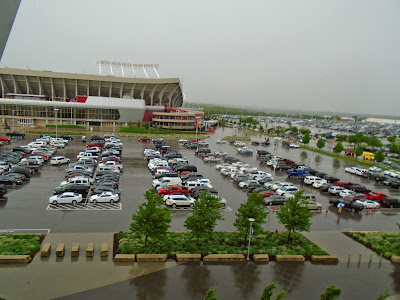 At this point the game was supposed to be starting, and while everyone else in our group stayed close to the seats, I wandered a bit.  I got this shot of Arrowhead from Kauffman which I think turned out good.  If I remember I will try to do the same when I go to my next Chiefs game. 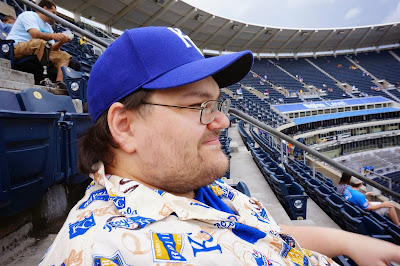 The remaining photos are from my friend.  This was from the brief moment we sat down in the seats.  For being the 400 level, I think we had good seats, and wouldn't be against sitting there again in the future. 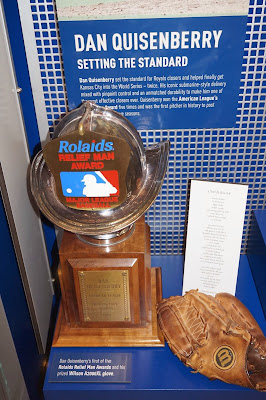 My friend and I kinda went a divide and conquer route in the Hall of Fame to get as many photos as possible.  This is one of my favorite photos he took inside the Hall of Fame.  Quiz won quite a few awards in his career. 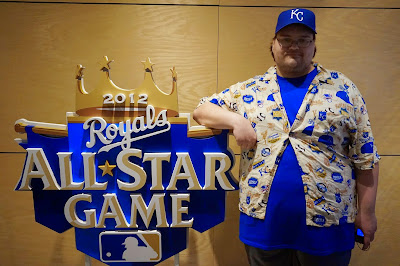 As we entered the Hall of Fame we saw this display of the logo from the 2012 All-Star Game.  We each got a snap with it. I really wanted to go to that game, a friend of mine I think did go to it.

Before I continue let me apologize for the shirt only having one button buttoned up.  I didn't plan on doing it but the wind was making it fly like crazy (which I could have unbuttoned inside but didn't).  I got a lot of rave reviews for the shirt though, so if I go to another game, I will absolutely wear it again.  I even took it to the game last year, but didn't wear it. 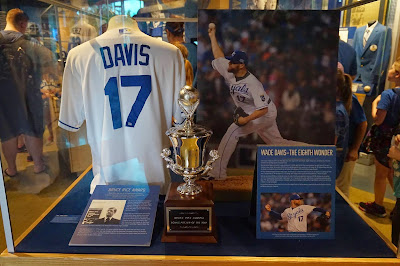 I was the only supporter of Wade Davis it seemed heading into last year, but by the end of the year, he had many more supporters.  This was also just as you entered the Hall.  They had a ton of stuff from last years team in the Hall.  Now I wish I was able to check it out last year to see what they had to remove to include all of it. 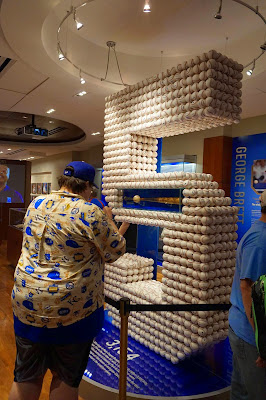 We each got a much better shot of this, but at least my friend had one where I'm in the shot.  For those of you who don't know about this- George Brett obviously wore #5.  In his career he had 3,154 hits. This display is of 3,154 baseball to show all of his hits.  In the middle is the ball and bat he used that garnered his 3,000th hit.  The balls are screwed and glued together and is somewhat unstable as someone is there to make sure you don't touch it. 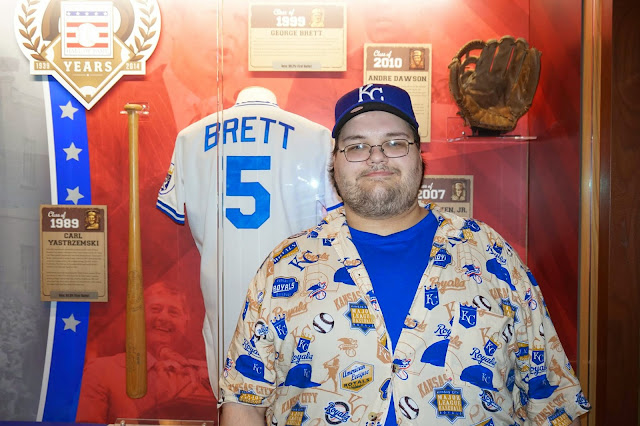 Inside the Royals Hall of Fame was a section of items that were on display from the National Baseball Hall of Fame.  Included was this George Brett jersey.  I believe it is from either 1986 or 1987 as it had a patch on it to honor or support Dick Howser. 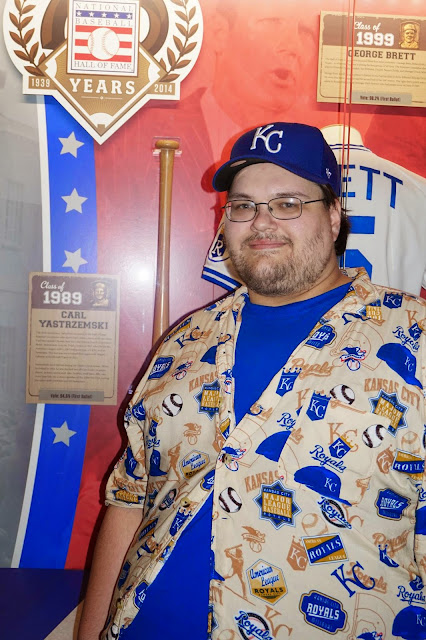 Yes next to is is a Carl Yastrzemski bat.  I was pretty excited to see it.  Also included in the display were items from Cal Ripken Jr., Andrew Dawson, and Willie Mays among others.  Really a nice extra I didn't know about.  This place really had so much to take in that I'm sure I could see new stuff everytime I would check it out. 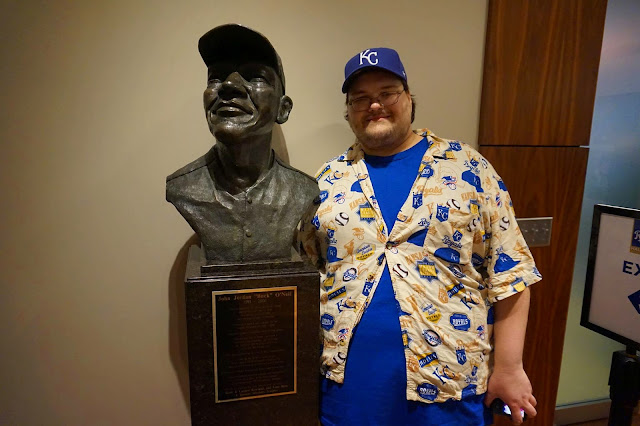 Another picture I was really glad I was in was this one standing next to a bust of Buck O'Neil.  One day I want to visit the Negro Leagues Museum which is also in Kansas City that Buck had a huge hand in creating.  Buck is an icon in the City, and it was an honor to get a photo.

Finally before we left was a wall of plaques, which I assumed were members of the Royals Hall of Fame, all the names were there- Brett, Saberhagen, Willie Wilson, Amos Otis, Ewing and Muriel Kauffman, and so on.  One name really stood out to me. 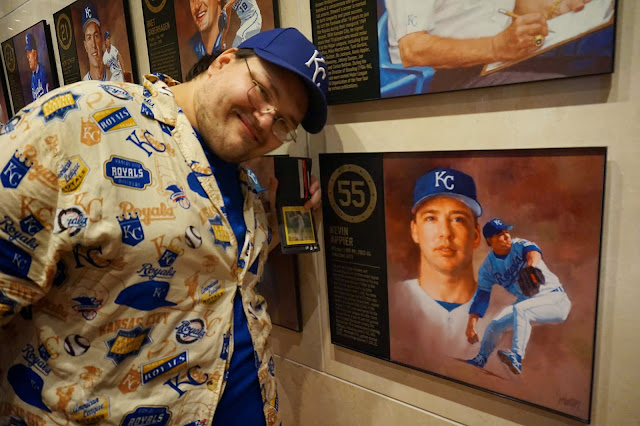 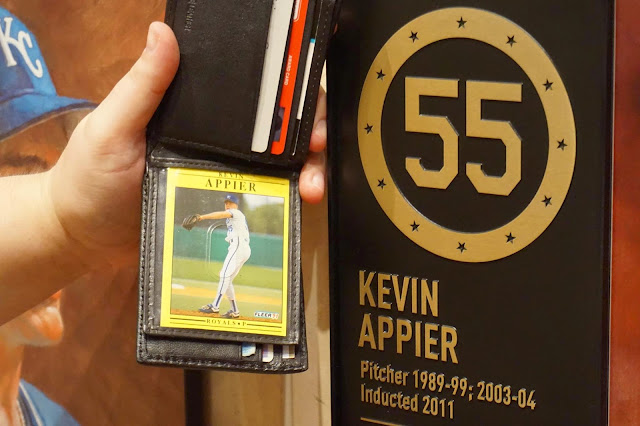 WHY!!! IT'S MR. WALLET CARD HIMSELF!  I carry the wallet card with me all the time but never think about it until its too late.  Seeing his name sparked me to remember and so I was able to get a couple shots to prove I still carry it.  I really did like Appier so I was excited to see him inducted into the Hall of Fame. 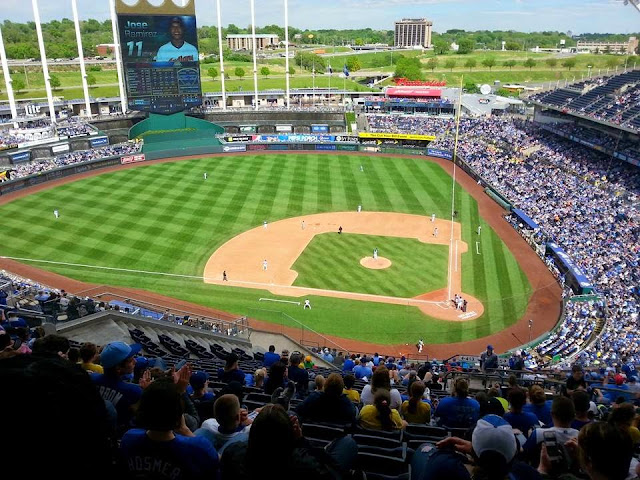 After it was announced it would be 2 more hours before a decision we decided to leave.  30 minutes later it cleared up and they played.  It sucks, but oh well.  Another friend of mine went to the game with the school and took this shot once the game got underway.  Still pretty packed considering a almost 3 hour rain delay which most of the crowd was school kids.  As a matter of fact attendance this year has been off the charts.  Not to mention the local TV ratings have dwarfed anything else on TV.  I'm glad people are showing their support again.

Thanks so much for reading and have a great night.