In a similar vein to my Ebay posting where I show items, I stumbled upon a site last night and thought I would show off some items.  This is not an endorsement of the site or the items, it is purely just a post showing off random items.

A couple weeks ago I heard that famed Cardinals announcer and former Cardinals player and also former Mizzou player Mike Shannon was auctioning off some of his possessions online on a site called Lelands.com.  I largely forgot about it until last night when I was on a St. Louis TV station website reading about the going ons in the Central West End distract of St. Louis.  It's one of the nicest areas and the most desirable place to live in the county but unfortunately it has had an uptick of murders there lately.  It started a couple years ago when a former Volleyball player was killed in her car during mid-day in a likely robbery attempt.  Since then crime has gone up.  I keep up on the CWE as some call it because it is close to the hospital my sister had to go to for her cancer treatments.  I walked around the CWE a few times, and once even walked almost a mile in the distract.  I was a bit nervous, not because of being in a big city, but I had to haul two suitcases around the area so it was obvious I was an out of towner and a likely mark.  I had no hassles and it was a very nice area.  It borders Forest Park which is a place you must go to if you visit St. Louis.  It was home of the 1904 World's Fair and the current home of the St. Louis Zoo, St. Louis Science Center, and so much more.

Anyways, while getting caught up on all the news from the CWE, I saw a story on the auction for Mike Shannon's belongings.  Since I had nothing better to do at 4 AM (besides planning future blogs) I decided to take a gander at the items.  I decided to make a blog of it and show off some of the items. 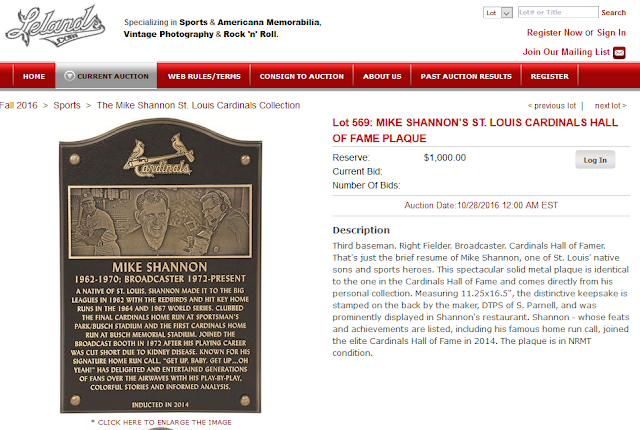 I'm not sure why Shannon is auctioning this stuff off or if it has anything to do with him closing his restaurant in St. Louis this year, but it astounds me the items people choose to sell.  Then again, maybe he wants to see the pleasure of a fan buying this and make a few bucks on the side.   I like this piece, but I don't think I'd bid even if I had the money. 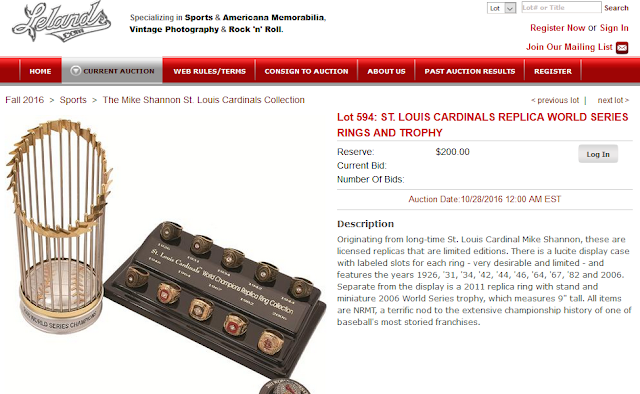 I can understand selling these off, and I don't think that is a crazy reserve.  I wouldn't mind having the trophy, but I don't think I would bid on this either. 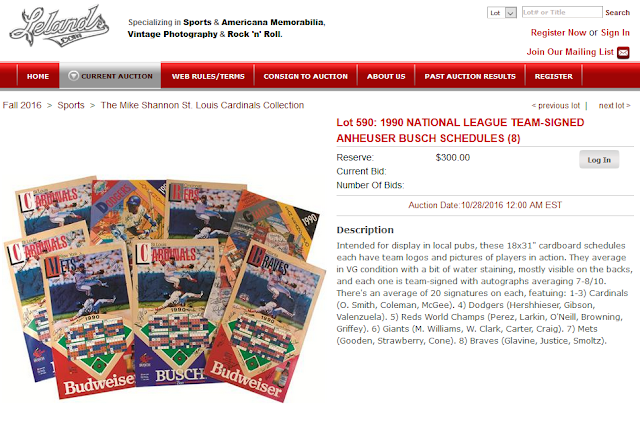 Now this one I'll be honest with, I'm a sucker for this lot here.  If I did have the extra money, I would likely bid on it.  Look at that list of amazing of names its a who's who of star players of the era and reminds me of when I was first getting into the game.  I am also for some reason a fan of beer advertising even though I don't drink. 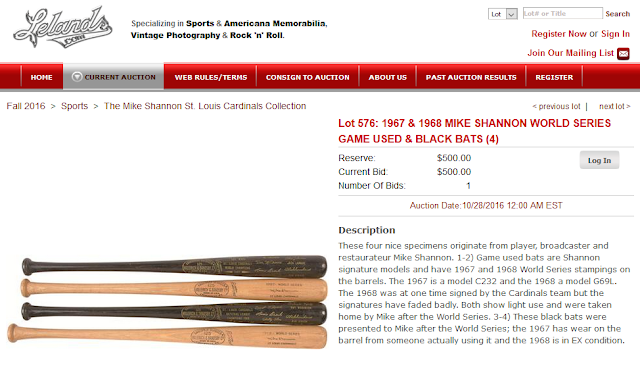 This is another item if I had the expendable money I would bid on.  I won't lie and say I'm a huge Mike Shannon fan, but the guy did go to Mizzou, and I've heard him on the radio since birth even when you couldn't understand what he was talking about.  His run is almost over but I would like something of his and I like bats.  I don't have many (but I do have a Hal McRae mass produced bat which is cool). Everyone knows Roger Maris as a Yankee, but forget he was also a Cardinal.  I never got to see him play and I probably disservice him by not ranking him high enough as best players, but I will say that what I do know of him, I felt sorry for him a bit.  I have a DVD of the HBO movie called 61* and it was a really good movie.  It dealt with the race to 61 home runs in 1961 and people hating on him because they didn't want Babe Ruth's record broken.  As the season progressed you could see the damage it had done to him.  I highly recommend the movie if you haven't seen it.  It's been a while since I've seen it so maybe it's time to dig it out again. 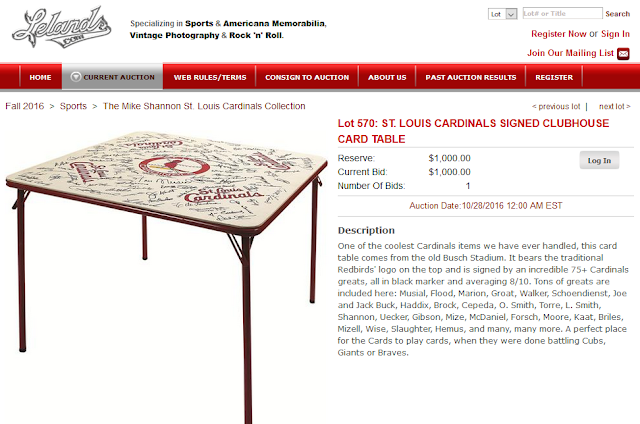 You have to admit, the names are cool especially the greatness of those players (and Bob Uecker too).  However I like that this comes from Old Busch Stadium and has the old Cardinals logo on it.  I really liked the circle logo they used and wish they would bring it back at least on throwback nights.  As for the table itself, just imagine the stories it could tell, and imagine those players sitting at the table at various points through the years and through their time as Cardinals.  $1000 bucks may seem steep, but I think that is well worth it, even though I would never be able to sniff it much less bid on it. This is the final piece I'll show, and its a beauty.  Anymore its a 50/50 guess if an item it really game worn, but since it come from the man's actual collection, I believe it is.  The younger generation may only think of him as the old cranky announcer, but he was no slouch as a ball player.  To be honest this items deserves to be on display at a museum more than it needs to be sold.  I hope if he has other game worn jersey's at least one ends up in the Cardinals Hall of Fame if they have one.  As much as I harp on the Cardinals, they have a rich history and it needs to be properly displayed.

In total there are just over 30 items up for bid in the Mike Shannon Collection and the auctions end around October 28th, so enough time if you truly wanted to scrounge the money together and make a bid on something.  The website is www.lelands.com.  I'm not being paid to endorse them, I just found it fascinating, and after I saw these items, I saw they have much more items up for auction as well.  If you are a super collector or merely want to kill some time, its worth checking out.  They have everything from Crosley Field Stadium seats to Roberto Clemente signed photos, to a Notre Dame stool signed by Rudy and so much more, even some Ali items.  I bookmarked the site and hope to find more items on there and who knows, maybe I'll do more posts about it in the future.

That wraps it up for today, I know its been a bit slow around here lately, but I hope to be more active next month.  I needed a little break and I'm still on a good pace to break last years post count so I'll work hard on that.  Thanks so much for reading and have a great weekend.