A Second Slice of COMC Goodness

Last time I showed off the mostly non-baseball cards I got on a recent order of COMC.  Today its the baseball portion.  Let's dig in.

You know how I say I need to organize better?  The George Brett card is a great example. After getting this, I realized I now have 3 of them, so this one went to a friend.  It is a nice card and was cheap though so I can't be too mad. The Mike Sweeney card is from a Post cereal set and the only Royals player in the set, so I finished a set.  Double points.  The Santana I likely overpaid for especially since it was likely a dime on Just Commons, but I am close to finishing the set, so it isn't a huge deal.  It was a card I liked and needed so it worked out fine. 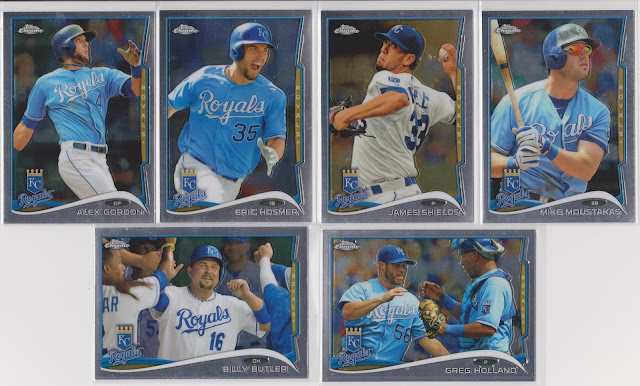 2014 Chrome for cheap?  Sure why not.  I've mentioned Chrome isn't my thing, but when it comes to team sets I can't discriminate.  A solid bunch of cards and it helps to complete it faster, so I got that going for me.

Now these are a different story (and the Cain card is fine, just a scanning mishap).  I've been picking these cards up piece by piece and have only a few left to get to finish the team set.  It is a perfect parallel set for the Royals and I love getting these.  I was surprised to see so many of these names going as cheap as they were.  I have my sights set on a few more as we speak, and with a recent win on the COMC Facebook page (which I noticed AFTER I shipped these cards), I have a bit more dough to spend on these.

The Chris Getz is also a nice looking Royals card, and I can tell by the State Farm bullpen in the background that shot was taken at The K.  The person most likely coming out of that pen?  Greg Holland of course.  This is a nice Elite card, almost perfect minus the logoless hat.  Great job with that card Panini.  The same can be said for the 2015 Donruss of Brandon Finnegan.  The hat may not have a logo, but it is a bit more discreet and not too noticeable.  I'm going to miss Finnegan in Kansas City, but with the rumors that at best he'd be stuck in the bullpen, it may not have been a bad trade.  Finally is the Foster Griffin card.  I will admit I don't know a lot about him, but this isn't my first card of him.  If I find them cheap, real cheap or on Listia, I snatch them up.  It could be a great or a terrible investment, but we'll find out in a couple years.  For now I'll keep looking out for them, the same as I did with Cody Reed, who I think could be the wild card in that Cuerto trade. 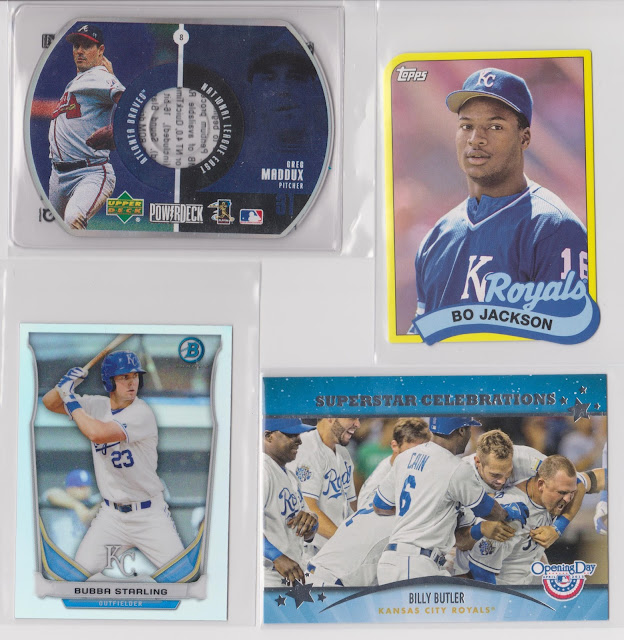 I hear rumors that Bubba Starling was part of trade talks too, but luckily we held onto him.  It could be a good thing too if Alex Gordon decides to test free agency and Rios and/or Zobrist won't be back.  We have talent in the outfield, but another one waiting in the wings is never a bad thing.

I got the Superstar Celebrations card a while back and may have gotten an additional one in a trade, but its still a nice card and completes an insert team set, so again, double points.  The Bo Jackson one was also cheap enough to get even though I wasn't sure I needed it.  I did at one point but in any event, I have it now, so that's all that matter.  The mini die cuts aren't my favorite but these aren't too bad.

Finally is a card(?) that I got a few months ago when it went on sale, and one I might have been most excited to get.  With close to 150 different Greg Maddux cards, I'm starting to search for more oddball cards not in my collection.  This CD card was one I have been almost salivating over, and while they may not hold much value now, it is worth a lot to me.  It would be fun for a company to explore this idea again since more stuff can be crammed on a CD now, but with them becoming more obsolete, I doubt it happens.  It would still be fun to see cereal boxes filled with these showing the players top plays and maybe a short interview.  Possibly make it of former players or Hall of Famers.  I think they would still sell well.

Another Maddux oddball I've spied lately is this Fun Pack card.  It wasn't cheap but the price finally dropped enough to justify getting it.  This set doesn't appeal to me as much as it did when I first found a pack of these last year, but it is still different and I enjoy seeing them.  It won't stop me from getting a few more including the Royals team set.

Next is some former Mizzou pitchers.  We'll start with the John Dettmer autograph.  I have quite a collection of Dettmer's cards I picked up cheap last year on COMC but an autograph one never made it to my collection.  This one I spied for a while, and finally I snatched it up with a June sale on the site.  It didn't set me back much, and now I'm happy to have another Mizzou signature.

The Max Scherzer I just found recently and bought it within a week of first seeing it.  I've always liked Scherzer, so when he pitched the near perfect game, I knew prices of his cards would maybe jump.  I got this before that happened (if it did indeed happen) and I'm glad I have a minor league card of him.  This set I have a few other cards of but my next one I hope to find cheap is Moustakas.  As for Scherzer, I hope to find a cheap autographed card one day, but not sure how realistic that will be.  Maybe I can find out next time he'll be in Columbia and get one in person.

Lastly is Dennis Musgraves.  Dennis has a very few amount of cards and none are from his playing days (as far as I can tell).   I've searched for over a year for a card of his, and finally found it recently and cheap enough to buy instantly.  I don't want to give away too much of his story because I would like to get more information on him and use it in an upcoming post on Missouri Sports History.

So this concluded an awesome batch of cards I got on COMC, and I am already working on another batch of cards, but will likely hold off on getting them shipped until their next free shipping event likely in November.

Thanks for reading and I hope you enjoyed these posts, have a great night.