Custom Cards- More From The Olympics

I was thinking today that I should do some sort of custom cards for the World Series.  My take was going to be something along the lines of the movie Major League vs. Rookie Of The Year, or the Indians vs. the Cubs.  Before I thought much beyond that though, I realized I still hadn't completed the Olympics set from a few months back.  So I decided until I finish it, I won't do other custom cards, except on super rare occasions, and even then it will be limited.  So today I spent some time making a new batch of Olympic cards, and once the dust cleared, I still have about 30 or so cards left to make including one whole insert set I haven't even designed yet.  However, I knocked out about 10 or more today, and that was a good start for me, so let's take a gander at what we have. 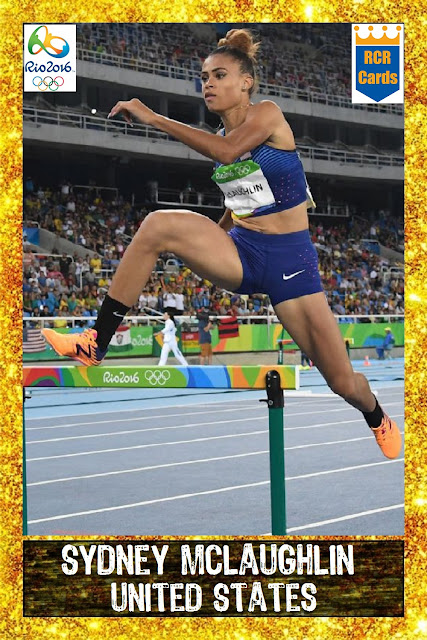 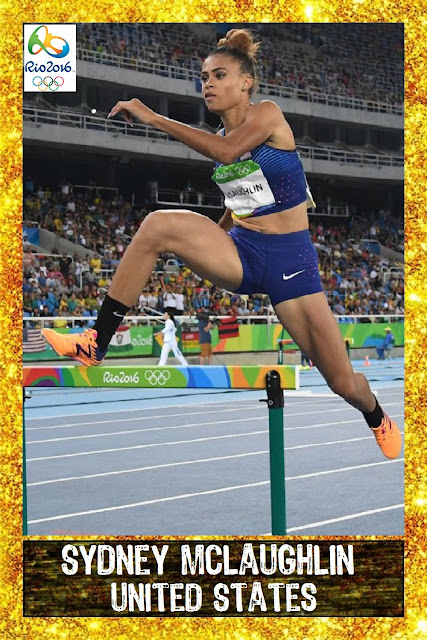 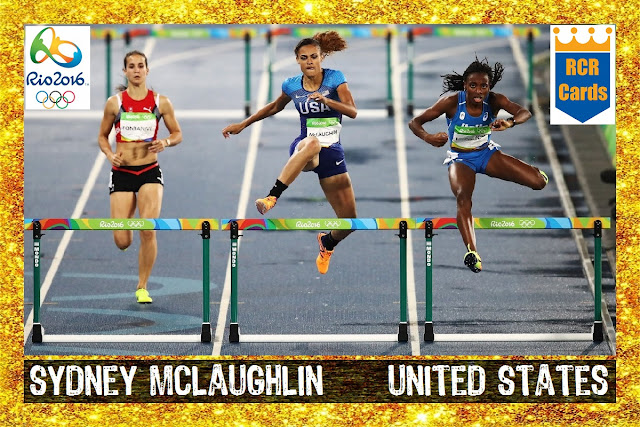 Let's start with a request I got the last time I posted some of these cards.  One of the comments I got was from Chris who asked if I could do a custom for Sydney McLaughlin who lives in his vicinity.  I was more than happy to do it, but since I didn't know a lot about her I was sure which photo would look best.  I decided on these two photos because of the action of the photos.  I included two copies of the first one in case Chris wants to print a copy and didn't really want my logo on the card.  At any rate, it was fun to work on these, and I also got to make a rare vertical card for this set. 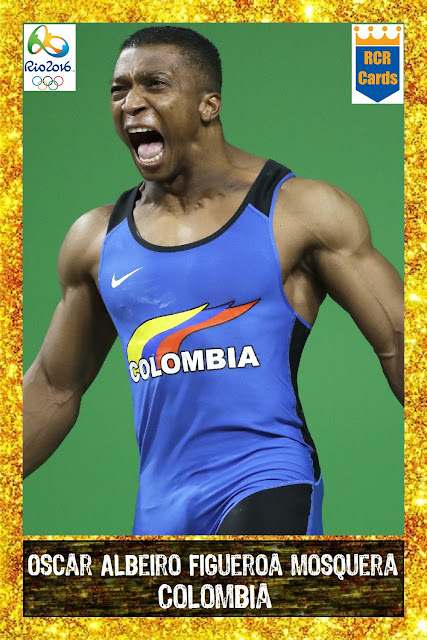 Well, for the most part rare.  A lot of today's cards actually worked better in the vertical format, so I went with it.  This card I think is the lone card representing Colombia, and if there is any light at the end of the tunnel, its another country I have completed. 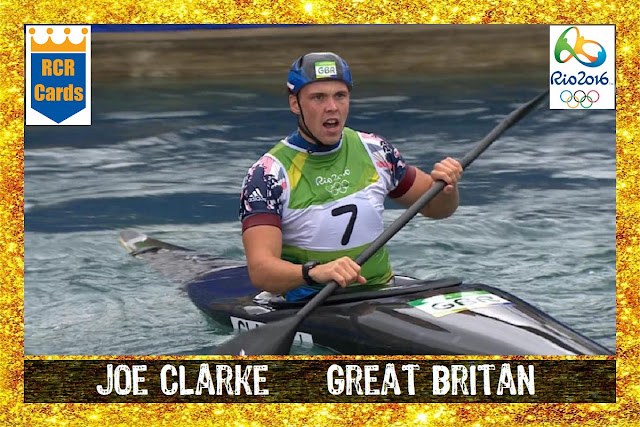 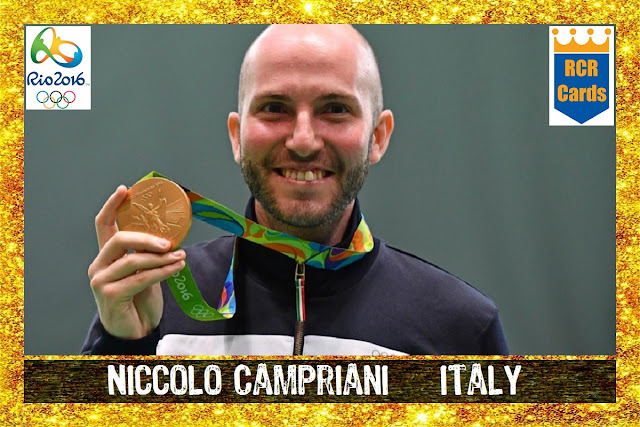 I apologize for not remembering what sport most of these athletes competed in, but like trying to get a lot of countries, I tried to get a variety of sports as well.  Luckily if you like a card and want to know more about the athletes, you can simply google their name and find out more.  If you search for Mr. Campriani though, his name is actually written as Niccoló Campriani.  I couldn't get it to look right with the font I used so I figured I'd just do it the way I did.  On the bright side, I found a site that shows me how to actually write the special characters so I learned something today. 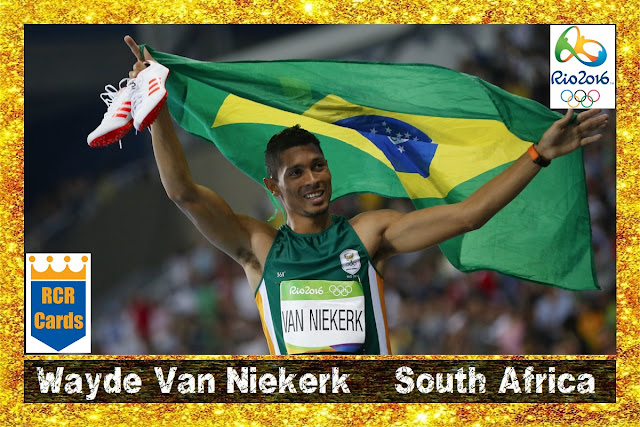 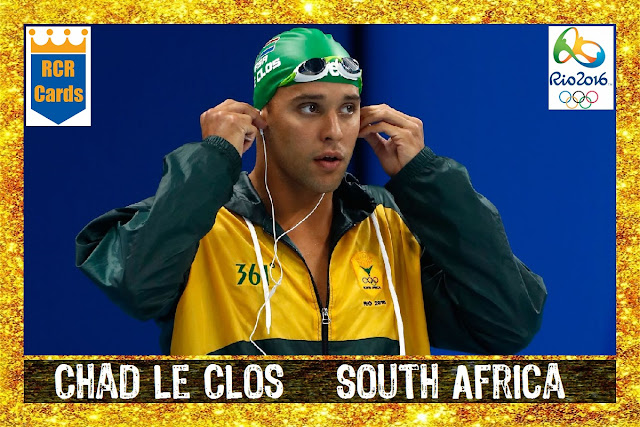 The Niekirk I actually finished right after I showed the last batch, its just been sitting there alone until today.  As for Chad Le Clos, its like I've become a fanboy of his.  I am pretty sure though this is the last card I have for him, though I can't guarantee it.  I saw a commercial a couple days ago for HP I think that did a parody of Le Clos and his pregame warm up where Michael Phelps made that meme-worthy face.  In the commercial Phelps makes that face again and Jim Parsons (Sheldon from Big Bang Theory) comes in and said he should get a HP computer and he wouldn't make that face, more or less.  Then they pan out to see an actor mimicking the Le Clos warm up and Parsons asks Phelps what is he doing.  Phelps responds "I have no idea."  Not a bad commercial, but its not like the Ice T commercial from Geico that makes me want to stop what I'm doing and watch it every time. 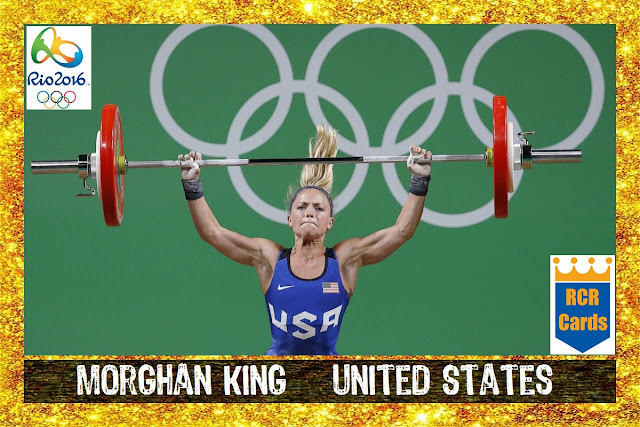 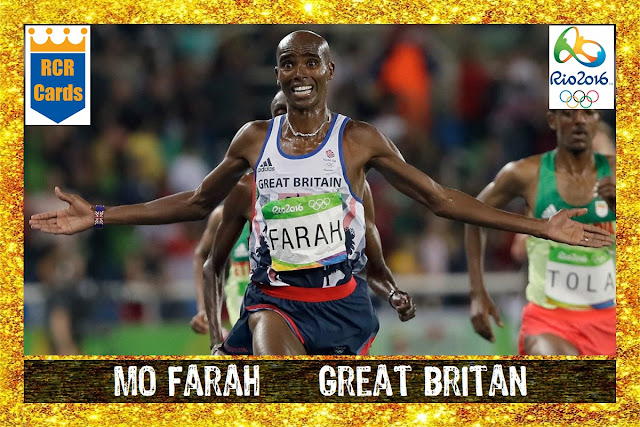 I'm not real impressed with the finished product on the Morghan King card.  Something just doesn't feel right about it, but oh well.  I don't know anything about her, but at the time I thought it would make for a good card.  Mo Farah on the other hand I did hear of and I wanted to include a card for him.  I think it turned out better than I hoped, but I wish I didn't have to crop it as much as I did.  Oh well, it could have been worse. 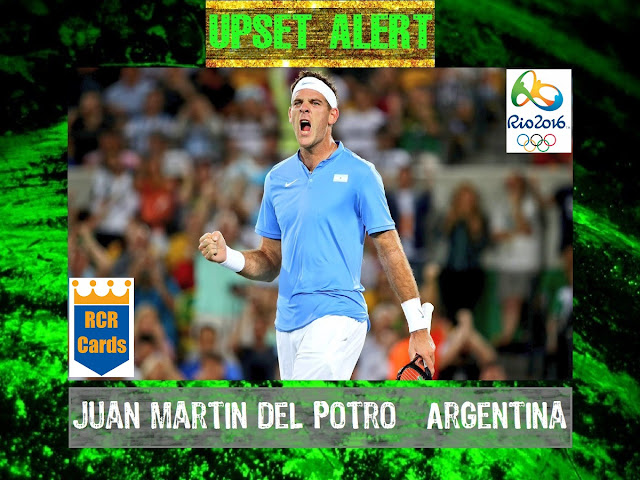 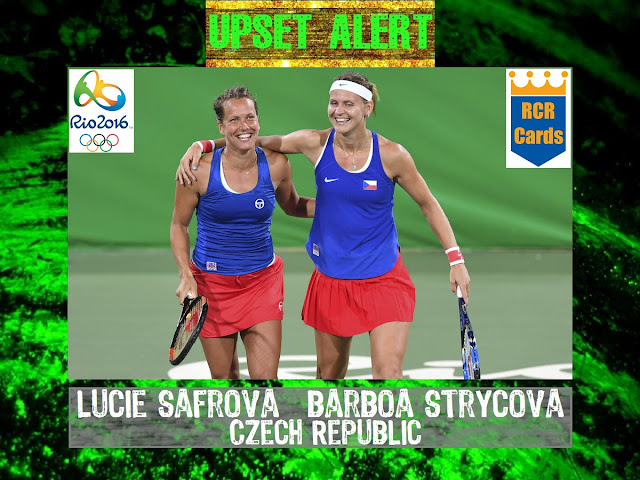 A couple inserts, both the Upset Alert series, and both from the world of Tennis.  The Tennis portion of the Olympics started off very odd with the amount of upsets and the stars who you thought would dominate just puttered.  I like the finished product of these, but I admit I still made the border way too big, and it made for a tougher design for cropping the cards.  When I work on the other insert set I'll have less of a border, but still need to find a good balance to make it different from the base set. 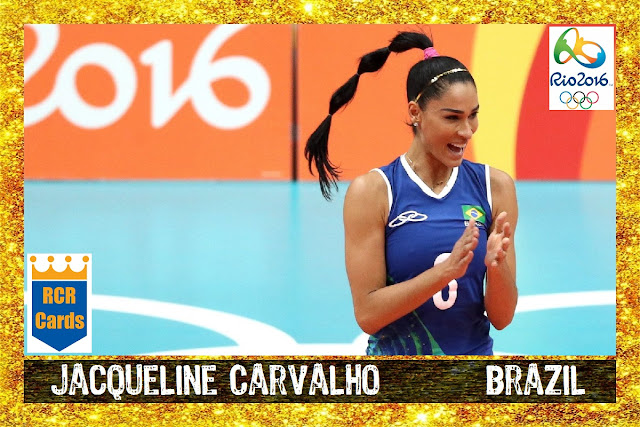 This is the first card I worked on today, and I like how it turned out, aside from spacing issues on the name and country.  I never heard of Ms. Carvalho, but when I scoured for pictured on the first day of the Olympics (or the first week), I came across this photo, and for the hair alone I wanted to make it a card.  Brazil is represented well in this set, but if I found more photos like this they would have been included as well.

Okay, so the star power may not be that big so far, but with a couple more cards, lets change that. 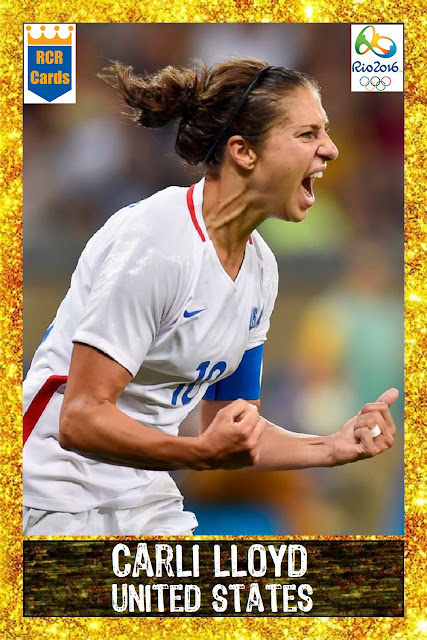 Another vertical card, this time for Carli Lloyd.  It just worked better for the photo, and I think it turned out great.  I didn't watch any soccer in the Olympics, but Carli Lloyd became a household name this year.  It was only fitting to include a card for her.  This might be my favorite card from this batch.

So one card left and its another vertical card for a United States star.  I still have plenty of names to do cards for, but it was time to make one for this track star. 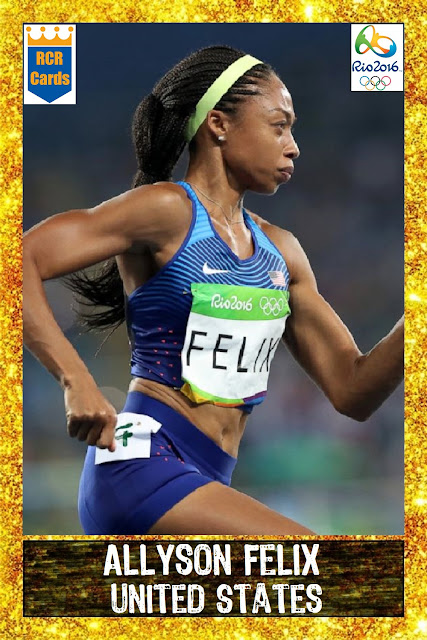 Track and Field and Gymnastics are the two events I love watching in the Olympics.  So already knowing a good amount of the names in track, the hype machine was in overdrive for Allyson Felix.  She's a great athlete and deserves it, so I had no problem with it.  However for these Olympics, I just wasn't into watch the Track portion as much as in past years, and I missed most of the events Allyson competed in.  That being said, I already had a good idea she would get a card in this set.  In fact if I had a list of 20 Americans who would get cards in this set, she would likely been a top 5 name for me to include.  I know I mentioned I didn't want all the big names because I wanted to focus on everybody, but I still needed names people are familiar with.  I hope I didn't disappoint.

So that wraps up another batch of customs.  I will try to work on another batch the next couple weeks, but don't have high hopes.  In the meantime, I still have other things I'm working on, but tonight I need to finish this so I can start watching the World Series.  While I'm happy for both cities and teams after having long droughts in World Series championships, I'm rooting for the Cubs.  Anyways, time to go so thanks for reading and have a great night.

Email ThisBlogThis!Share to TwitterShare to FacebookShare to Pinterest
Labels: Custom