What's In The Box

I was having a crappy day last weekend, and so when I had to go to Walmart to pick up a few things, I though I would check out the cards and see if anything was different.  Something was, but not what I expected.  They moved the sports cards slightly, and I'm actually a bit happier because of it.  It used to be at the end of a long aisle with Pokemon and all that stuff, but they always put that chain up preventing you from going down the aisle.  However it was located right as the sports cards started meaning the only way to look at them was to either look as you first enter the store (if you remember), or swing around past the checkouts before you actually check out which could get looks like you are about to steal a cart full of stuff.  Now because of placement, I can look at the cards just before I checkout, and Its better because that way if I don't have the extra cash for them, I simply don't have to get them.  That is I can look if they aren't using that checkout.  Which they seem to use half the time, but that's a different rant.

Anyways, since its been three weeks since I've last seen their selection, I was a bit excited.  However, nothing really amazed me.  I was about to just pass on them, but in the back of my mind I was thinking how I've been feeling and how crappy stuff has been, and said screw it, I want to open something. 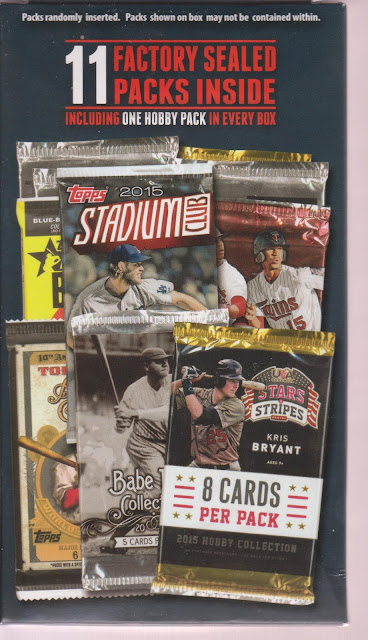 Hmm, 11 packs one being a hobby pack.  I guess with packs costing about 2 bucks a piece at the least these days, this isn't a bad deal for 20 bucks and you get a hobby pack, which is nice since I haven't bought a hobby pack in, well... I can't remember if I ever have. 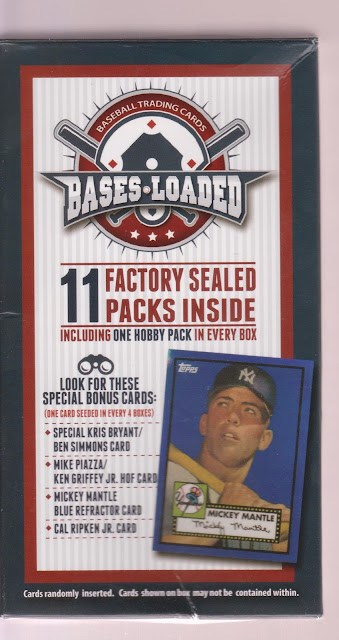 Interesting bonus cards, I don't figure I'll get any, but who knows.  Before I show the contents, I did have a little shock after looking at the receipt.  On the display shelf it didn't have a price listed, so I assumed it was 20 bucks.  When I looked though, it was only 14 or 15 bucks.  This makes it a little nicer since now these are basically one buck a pack with the hobby pack being around 4-5 bucks, which I assume is about the going rate.  So before opening it I got excited. 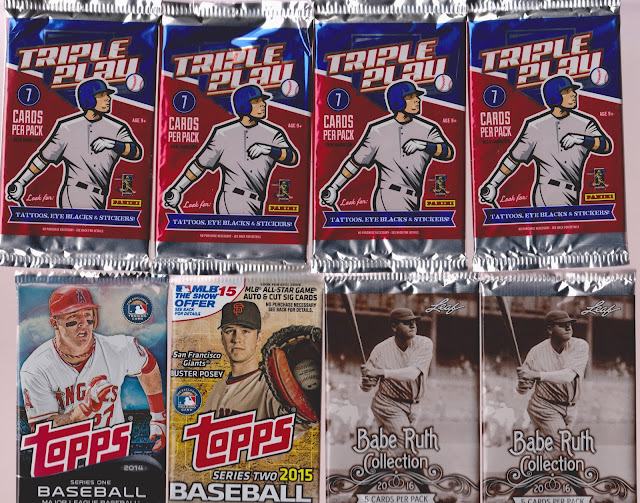 POOP!  Look at all those crappy Triple Play packs.  Can I complain about them?  I mean I did figure there would be crappy packs, and if they are dollar packs, these would fit in, but still, I was hoping I was done with those cards.  I wasn't too bothered by the two Topps packs though I've ripped enough already, but still these aren't too bad.  The Babe Ruth packs were new to me, and I never figured I'd buy the box I've seen of them unless they drop to 10-12 bucks, and even then I'd consider it.  But anyways, 4 packs I can handle, and 4 I should keep sealed and give away.

The Draft Picks packs are new to me and I'm a bit torn on because Panini didn't have a license for these cards, but hey, I'll take them over Triple Play any day.  The last pack is the Hobby Pack which is exactly the one shown on the box.  That counts for something right?  Again, unlicensed, but its a Hobby Pack, and who knows, maybe I did pull a Kris Bryant, or a Royals, or someone I've heard of.  11 packs, and like I said, for the buck a pack standpoint, I guess it is fair, but if I bought 11 packs at the same price, none would be Triple Play.

Then I noticed something else inside... a bonus card?  No, it was an Ultra Pro One Touch card holder.  I never had one of these and don't think I've even seen one, so this was pretty cool.  I haven't opened it yet, trying to think of the perfect card to place in it, likely the George Brett Rookie.  It's not a product I would normally buy, but it was really nice to have included.  It didn't mention anything about it in the box, so despite the Triple Play cards, this box I think totally was worth it now.  In fact before opening the packs, I might want to make another trip to get another box.  But alas, I haven't yet, but here's to the weekend.

So what did I get?  Well, let's start with the ones I don't want first, maybe I got some keepers.

Stickers!  I already had the Power Hitter one which I'd bet someones farm (since I don't own one) is supposed to be Albert Pujols, but the others were new to me.  I'm keeping the Verlander since I still like him, and the brick wall one looks cool so that will be kept for now.  I have no desire for the A-Gone, so it will be added to the don't need/want stack that I still need to sort and give to some people. 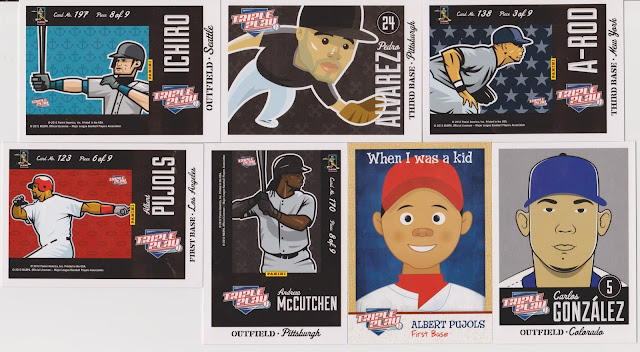 Some more cards, with a couple more Pujols, the kid one I didn't have, maybe didn't have the other one either.  I think aside from the Alverez I'm keeping the rest.  Though Car-Go may not make the cut if I need room.

So whatever, Triple Play didn't give me high expectations, since I've opened enough to know what I could get.  But the last pack felt different and I was amazed at a card I never heard about or seen before. 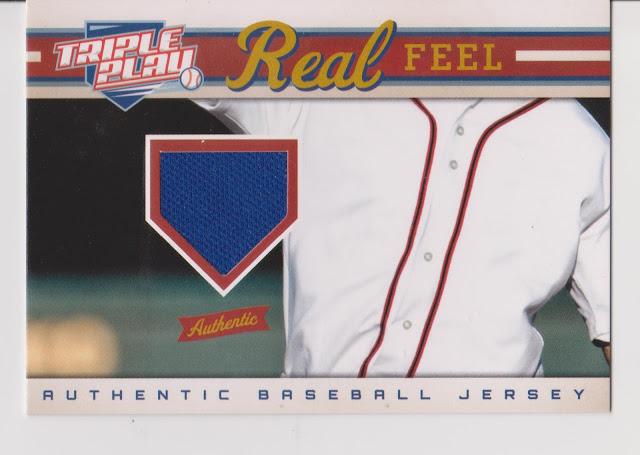 Is that a jersey card?  Why yes it is!  I didn't know they included it in the set, but it appears they did.  Now this is awesome on quite a few levels, mainly it makes me feel a little bad for bad mouthing the set so much, but.... BUT! It's an authentic jersey card of a team they can't name and don't identify a player with.  So it could be a Royals jersey, a Cubs jersey, a throwback jersey of a team, or any other team that has a shade of blue, we may never know.  I am a bit lucky though as one is listed on the Trading Card Database and it's pure white.  A WHITE JERSEY CARD!  I can only think of about 30 teams that could be.

Maybe the back will give us a clue about this jersey. 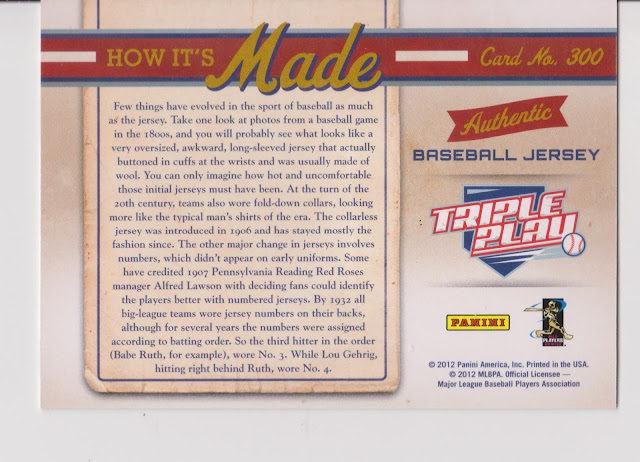 Oh, thanks for the history lesson, but it doesn't help me at all.  Overall though I can't and won't complain about getting the best possible card of the set, and I still have 7 other packs to look at.

What else did I pull in those packs?  See for yourself. 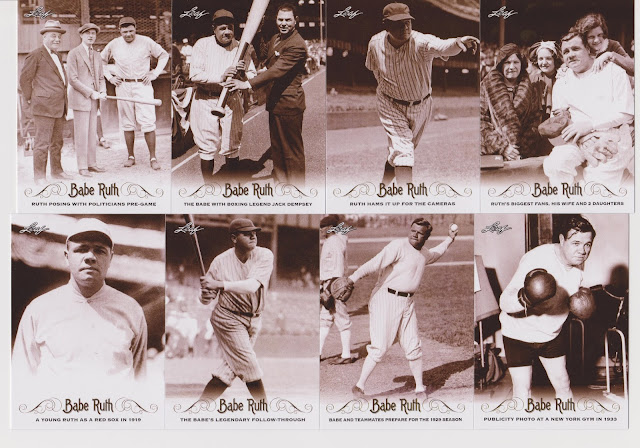 Just like the Pete Rose set, the logos and teams are scrubbed, but overall not a bad set.  Though I will say after opening them I still have no desire to build this set or anything. 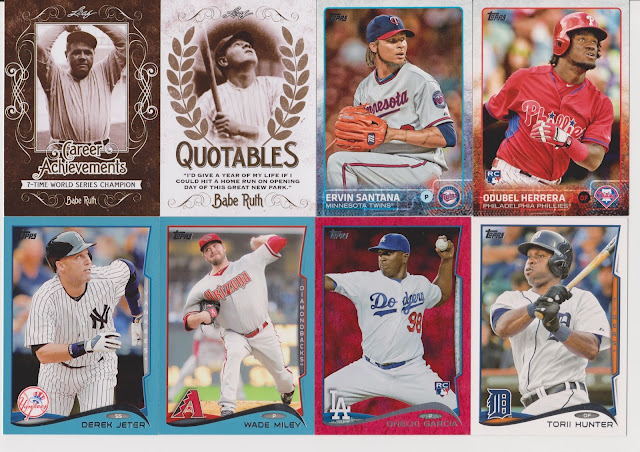 A couple more Bambino cards, both inserts, and both not bad.  They look nice.  As for the Topps cards, again, I've seen them before, but glad I pulled the Jeter and the red one.  Not much more to add though.

Nice Solarte card, and a Ryan Howard I may or may not have.  It goes into my collection either way, so it was a good pull.

So with only a couple packs left I'm not let down, but was hoping for a really big wow card, aside from that jersey card.

Am I asking too much?  Maybe, but oh well, I still have a hobby pack and a couple draft picks packs to open which could be gold! 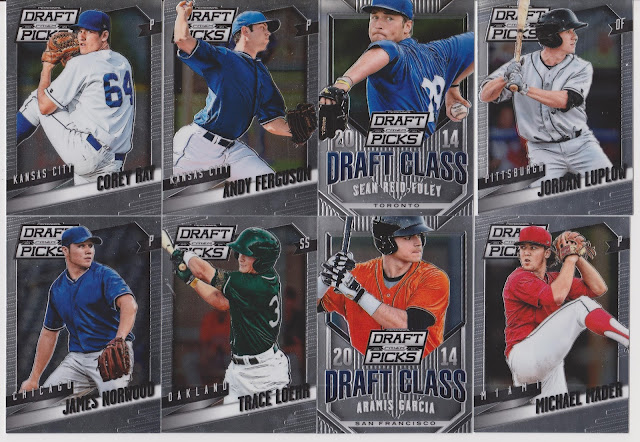 BAM!  A couple Royals (one was in each pack) and some other guys I never heard of.  Though having said that I still like them.  I'm not a big fan of the Chrome or whatever finish, but I do like the design aside from the scrubbing and no team names.  I was happy with these packs. 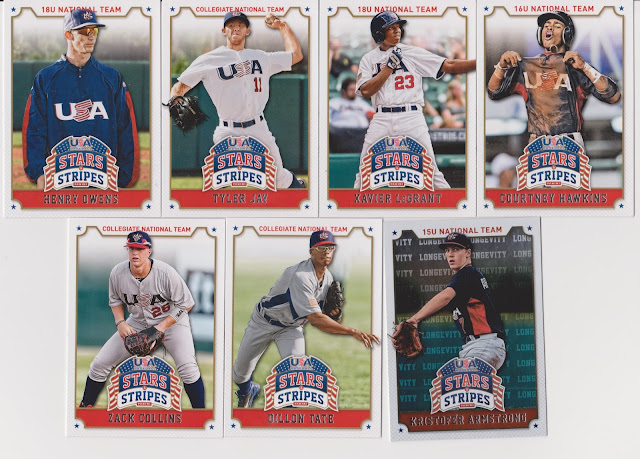 Time for the Hobby pack.  Can you be overwhelmed and underwhelmed at the same time?  I mean I really lie this design, one of my favorites in recent memory, but at the same time, I for some reason expected more from a hobby pack.  I know they the designs don't differ from retail and hobby packs, but while I really like the design, I kind of expected more.  The Longevity card though is a really nice insert card.  In fact again, its one of my favorite insert designs in recent memory, aside from a couple Topps sets.  The players themselves I'm not familiar with, but still, I may look into this set a bit more and maybe one day chase down a few more.

There is one other card in the pack which isn't super special in terms of being an insert, but its an insert and of a player I've heard of so that makes it a big one in my book. 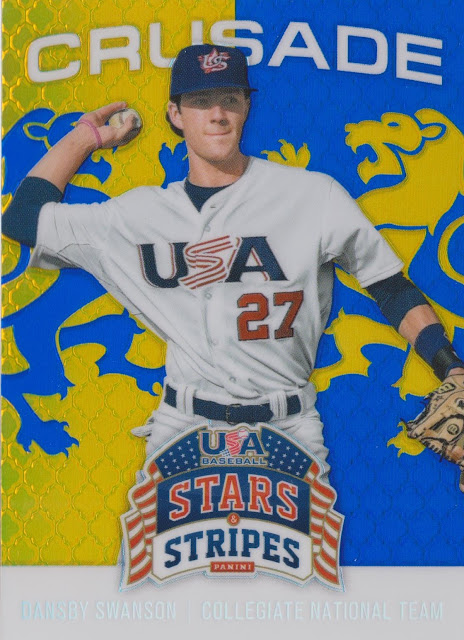 DANSBY SWANSON!  I've heard of him, I can dig this.  From what I've been told this is a Blue Crusade insert card, and while not super special or anything, it still reeks of awesomeness in my book.  *Note to self, when running spell check on here, Ebay is still underlined, but the word awesomeness, a word I've never heard of outside of Edge and Christian saying, isn't.  OKAY!

Anyways, overall I will say thinking about how these were all basically dollar packs and a 4 buck hobby pack, I think it was a fair deal even if I didn't get a bunch of packs I wanted.  The Ultra Pro bonus was nice and added value, but I'm not sure if it was in each box or random, so if I buy another I don't expect it again.  The cards themselves were all in line with the buck a pack price, with only a few true standout cards, but again, I can't complain.  I think having weighed all the pros and cons, I have to say this was well worth it.  I plan on getting another one if I get the chance soon.

What makes this a bit sweeter to me is the fact that I was considering getting a Loot Crate sometime, but was hung up on only getting a few packs for 20 bucks plus.  Sure they are hobby packs, but I like this box I got instead.  I'm guaranteed one hobby pack, plus 10 other packs and a possibility of bonus cards or items.  I know Loot Crate includes extras, including using the box itself as storage, but to me this makes more sense, and if I happen to be at Walmart I can get it now without waiting for it to come in the mail.

So that wraps it up for today.  I hope you enjoyed reading this post.  I'm sorry I haven't been replying to the comments, but I'm still trying to figure out why it won't let me reply to individual comments and I don't want to write a super long reply to everyone all at once.  I will say I've been reading them and enjoy them very much.  Thanks for the continued support from the blogging community, and I hope to make more quality posts soon.  Enjoy the weekend, and thanks again for reading.