Another Batch of Olympic Customs

"It's interesting he has sleep apnea and the first three letters of his last name is NAP!"-John Smoltz

I'm really tired, I really didn't want to do a blog, but I wanted to post some more and knock these out.  Tell me I wasn't the only one who heard this insanely idiotic line from John Smoltz in Game 1 of the World Series.  I thought Harold Reynolds was bad, and before that Tim McCarver, but holy crap that is some major league stretching and terrible announcing from Smoltz there.  I know I shouldn't keep harping on it but these announcers this year are a real snoozefest.  In fact I've almost fell asleep the first two games.  In fact I DID during game one.  I turned my back and closed my eyes (and left the TV on) the moment the Indians hit the 3 run blast to seal up a 6-0 victory.  I'm glad the Cubs tied the series, and hope they can finish it out at Wrigley.

Anyways, because I'm tired, not much talk today, just mostly some scans. 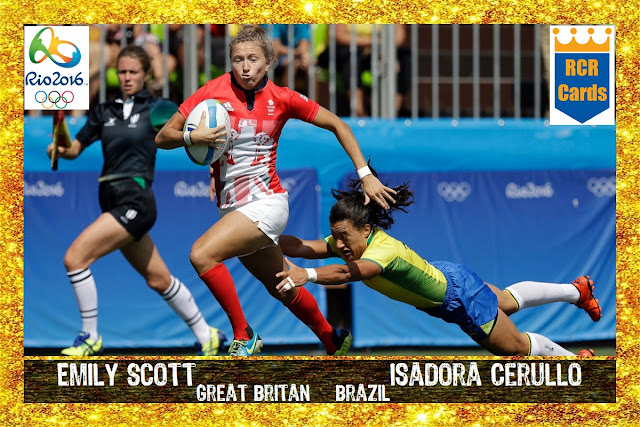 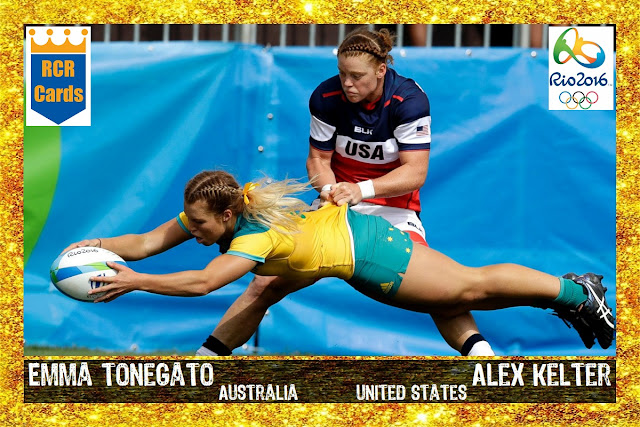 I tried out some action shots on these two with multiple countries.  I would have liked them to turn out better, but I'm not complaining too much. 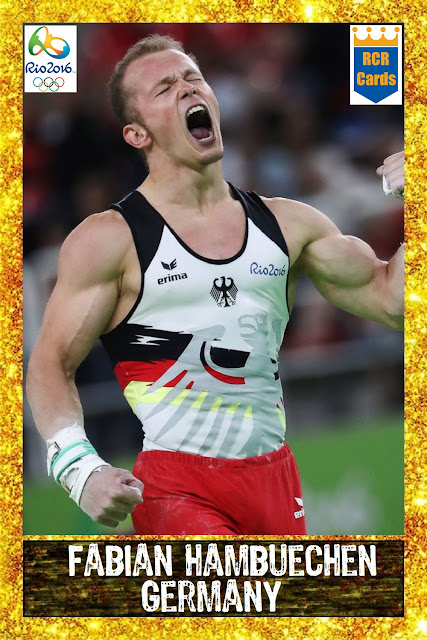 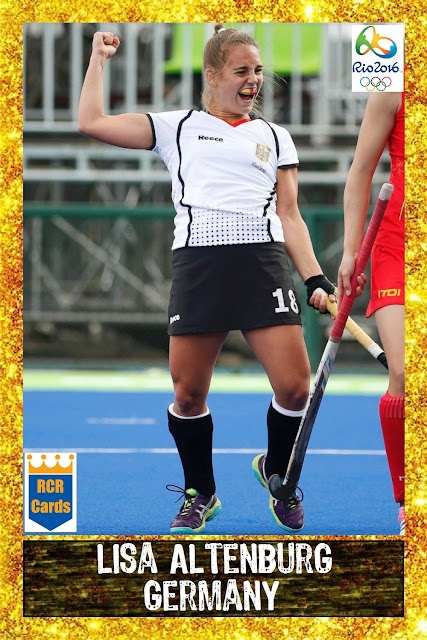 A couple cards from Germany, and I think they turned out fine.  Fabian is a gymnast but I can't remember how he did.  If I did this entire set of just the United States I would have represented the Men's Gymnastics team better but I didn't so they aren't.  Lisa Altenburg I presume is field hockey and I made it a card because I liked the photo. 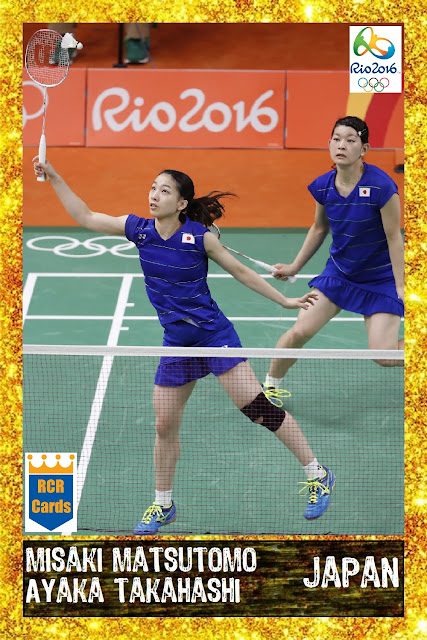 I tried out a team photo on this one and it took forever to make.  The photo wasn't cooperating with me and then the font isn't centered so its a card I almost wish I didn't make, but then again how often do you see badminton cards. 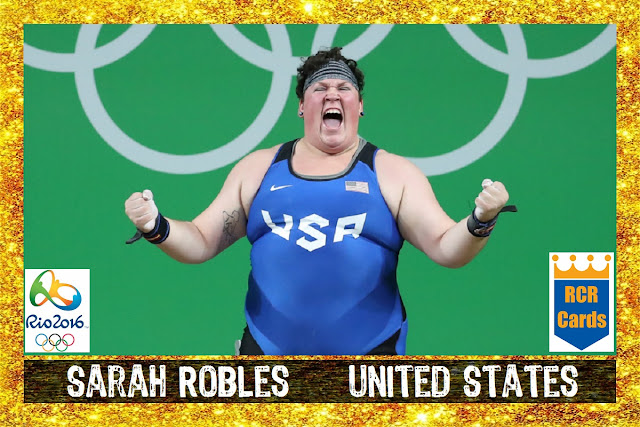 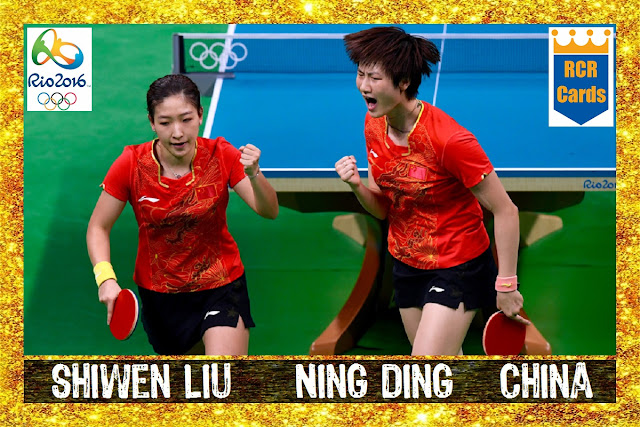 These two cards were much easier to make and were done in a snap.  I think both turned out really good.  If I remember right, WWE was interested in signing Sarah Robles to a contract, but I could be wrong.  As for the Chinese ladies, much like most of the other countries, I just hope I spelled their names right.  I try to double check so I'm sure I did. 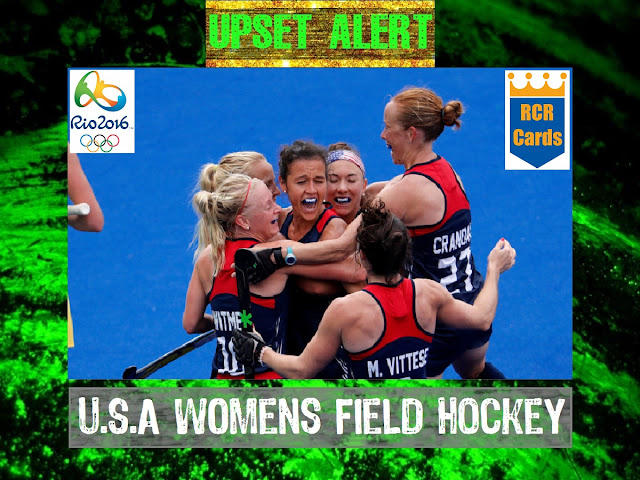 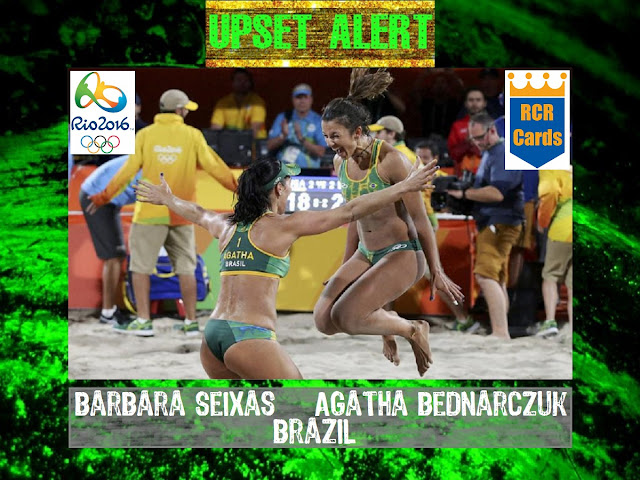 The last two Upset Alert inserts feature a couple teams.  Nobody really expected the Women's Field Hockey Team of the United States to do anything, but they really made an impression.  The Brazilian Women's Volleyball team did pretty much the same thing knocking off the Americans in front of their home crowd.  i think these cards turned out fine, but if I use the border again it will be much smaller, allowing for a bigger photo. 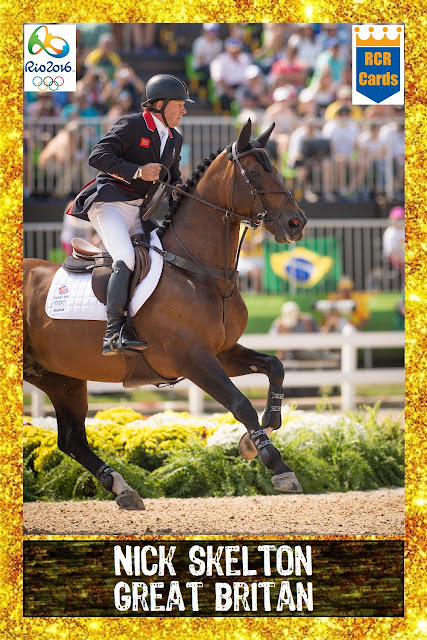 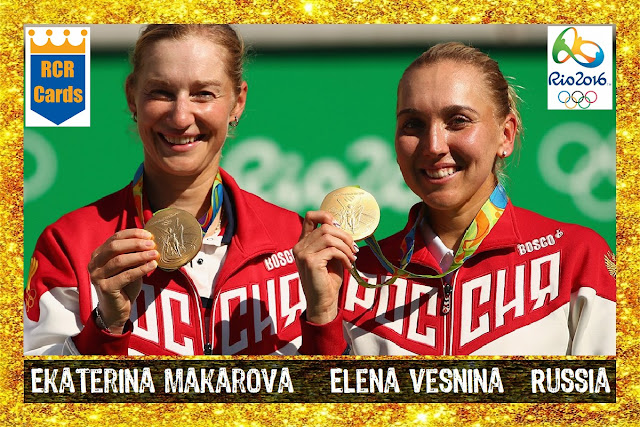 The Nick Skelton card might have been the easiest card I've made so far.  It probably took less than two minutes and only took that long because I had to add the logos.  The Russian ladies took a bit longer, but only because I tried to make the font and location perfect.  I am not 100% happy with the end result, but I'm happy enough.  I feel bad for not remember what event they competed in, but it was 2 months ago, and I'm pretty much over it at this point. 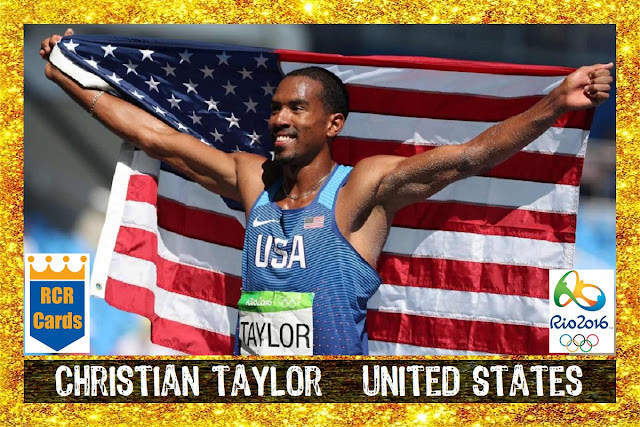 I always am a sucker with the photos of the athletes holding their country's flag.  It is pretty much the only reason I chose Christian Taylor to be a part of the set.  I still have some Americans to make cards of, but this could be the best one I've made for my home country.

It's time for the last card of the day.  I know this batch didn't feature a really high profile name, but I wanted to save the last batch for some of the real big names.  However this last one caught my eyes at the Olympics and is probably one of only two athletes I was for sure going to include. 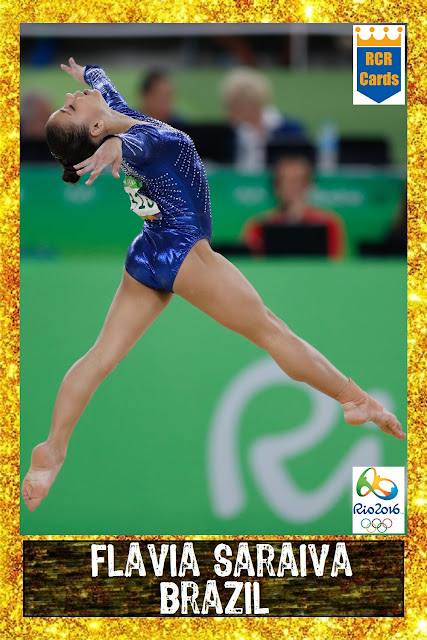 If you watch a good amount of Gymnastics, its a surprise if anything leaves you speechless, yet Flavia did just that at the Olympics.  I expected America to steamroll through like usual and expected a couple threats, in fact I hoped there would be because it makes it much better.  When they showed Flavia on the floor exercise and the balance beam I was just in awe.  What she was doing wasn't as great as how flawless she was doing it.  When I decided to make cards, she was the first one I looked up.  I might have gotten a better photo, but I like this one just fine.  I hope to see her compete again in four years.

So that will do it for this batch, I probably have about 2 or so more posts to do to finish them up including an entirely new set I've yet to show.  It's nothing major, but like I said when I started these, I wanted a bit of a challenge.  Since I can't type so well because I'm about to fall asleep, I guess I'll finish there, thanks for reading and have a great rest of the week and weekend.

Email ThisBlogThis!Share to TwitterShare to FacebookShare to Pinterest
Labels: Custom