So I made a trip to Savvy Seconds the other day.   I saw the same old CD's I've seen for a while, a wide variety, but none that interested me aside from the self titled album from LFO, but I already have it and like 4 of their singles so I was good.  I saw a Twilight soundtrack, and I passed.  Then I saw a Gin Blossoms CD.  New Miserable Experience!  I thought, I'll get that if I don't find other ones I want.  The thing is I already have that album and most their others on my hard drive, and I've seen them live and had the cassette, so I didn't really need it, but hey, 50 cents.
I passed on it though.  Instead I chose these. 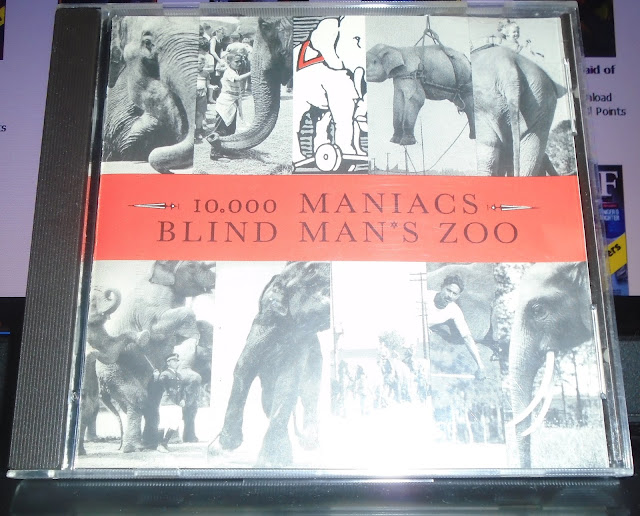 On occasion I'll see the Unplugged album from 10,000 Maniacs, and I think they even had the Tigerlily album from Natalie Merchant, but I already have that.  This was an album from 1989 and while I looked at it quickly none of the song titles stood out.  When I listened to it though I recognized the song Trouble Me so getting one song I like for 50 cents is a good deal.  I think all the songs were pretty good on it, so it was worth it. 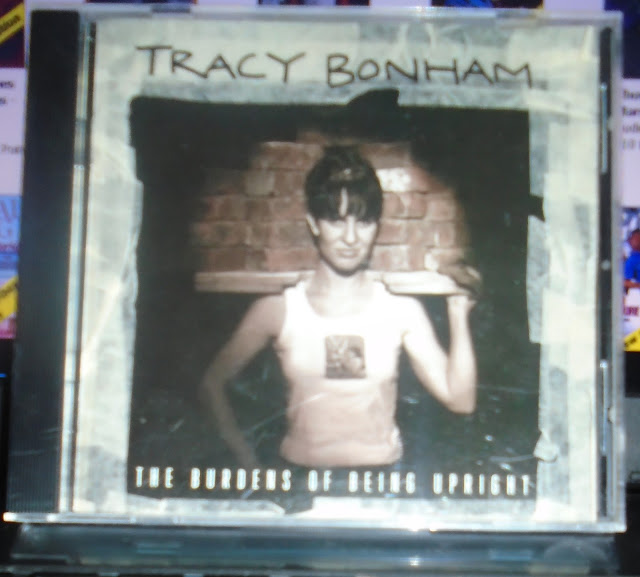 Tracy Bonham has always been an artist I've liked.  She had one hit, it was called Mother, Mother and I really liked it.  As it turns out, it was on this album.  Now I have to admit I have the song on my hard drive, but I'm not sure where I got it from, so having a CD copy of it makes me happy.  Oddly enough another song on the album is called One Hit Wonder.  I thought overall the album was good and also well worth 50 cents. 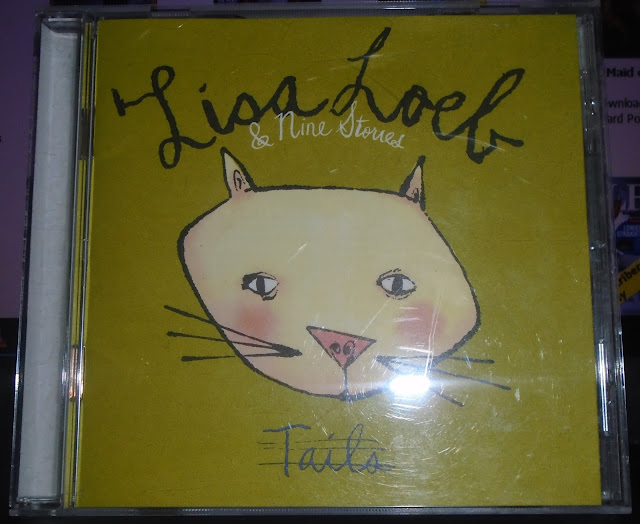 I love Lisa Loeb.  In fact, I don't think I've ever met anyone who hasn't liked Lisa Loeb.  Sure it doesn't come up in conversations a lot, but when it has, everyone has been a fan.  This album does have her hit Stay (I Miss You), but it also has her song Do You Sleep, which is one I like just as much.  Having both songs on this album is well worth the 50 cents.

I also was reminded of Lisa Loeb recently when having a Youtube day and watching old clips of Mad TV.  They did a parody of WB teenage dramas (i.e. Dawson's Creek) called "Pretty Pretty White Kids With Problems", and they actually had Lisa Loeb in the parody singing the theme song.  It was pretty funny.  In another Mad TV sketch Natalie Merchant was referenced (Kenny Rogers played by Will Sasso peed on her, but only after she was dead).

The thing is, I doubt I would have bought any of these CD's if I didn't see this last one first. 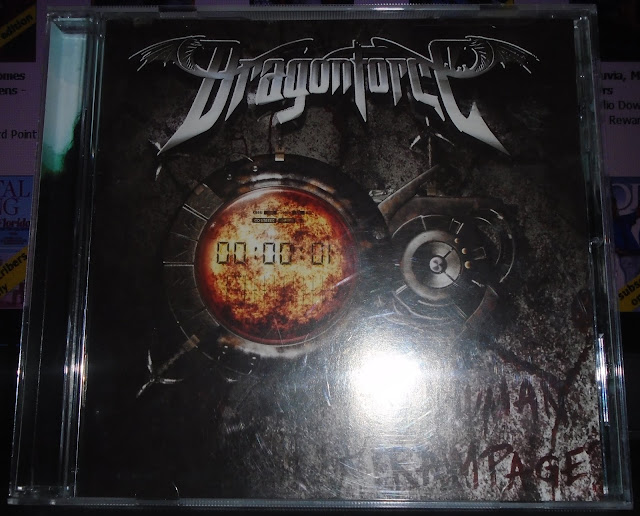 DRAGONFORCE!  HECK YEAH!  A friend of mine introduced me to the band shortly before their song Through The Fire And Flames made its way onto Guitar Hero 3.  I have I think 4 of their albums on my hard drive but never a physical copy.  They play an intense speed of rock music and while its not really heavy metal, its really good rock.  This album called Inhuman Rampage includes the aforementioned song as well as 7 other tracks.  While 8 songs may seem short, the average time of each song is about 7 or more minutes so its an hour long album.


I was so excited that I just wanted to pay for it and get to the car.  I was with my mom and I wanted to see her reaction to this.  She has an eclectic range in music and I get my musical variety from her though we don't really like the same artists.  She likes Don Williams and Slipknot and a mix of everything in between with exception to Rap and Taylor Swift.  As this song started I cranked it up and about a minute in she asked "Who is this?"  I told her "Dragonforce" and waited to hear if she approved.  "I like the drums".  I single out the guitar in most songs, but she can pinpoint the drums, which is cool, but I never thought about them on this song.  Another minute or so goes by... "How do they play that fast?"  I don't have an answer.  About 4 minutes in, and the songs half over, I get anxious... "So what do you think?"...

YES!!!!!!  50 cents well spent.  We may not agree on liking The Beatles, Neil Diamond, Tim McGraw, or Keith Urban, but we can agree on Dragonforce and Trans-Siberian Orchestra, so there's that.  For the record, she likes The Beatles and Keith Urban, I prefer Neil Diamond and Tim McGraw.  But I'm happy we find middle ground.

However, that isn't all.  I also got a couple more items as well.  These were ones I thought about passing up just because of the excitement on the CDs.  However I'm glad I didn't. 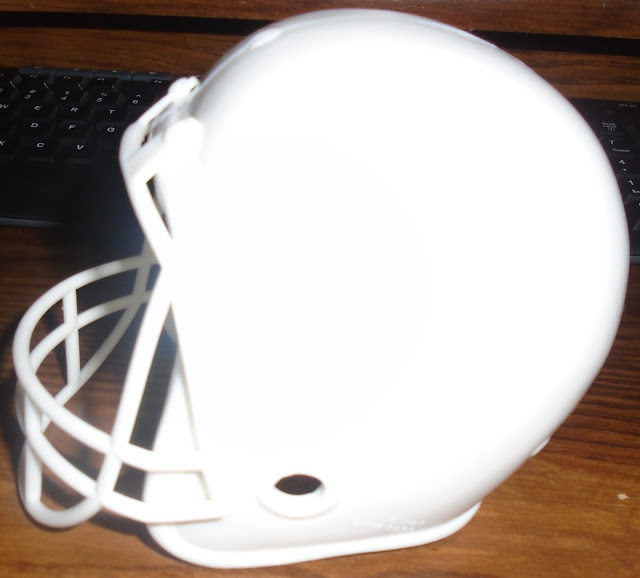 This is a plastic helmet, like an arts and crafts project.  I guess its about the size of  a mini helmet, but it was in a packaging that looked like it came from Hobby Lobby or Michaels.  I paid a buck for it, and I might paint it red and make it a Chiefs helmet, I haven't decided yet. 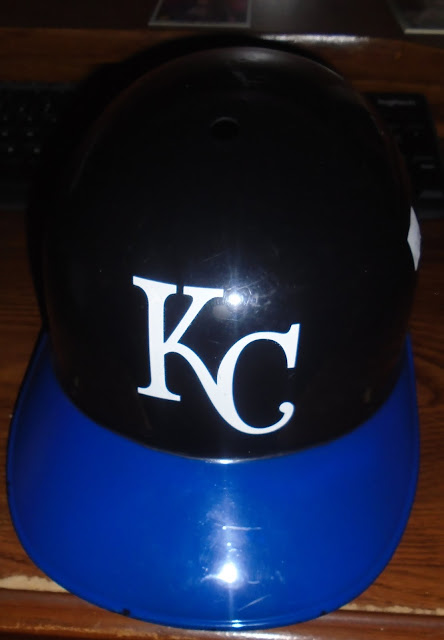 This was also a buck. I have full size replica helmets for the St. Louis Cardinals, and the Texas Rangers, but none for the Royals, so while I wanted one, I wasn't completely sold on this one.  I never cared for the black and blue look, but something was also missing on this one. 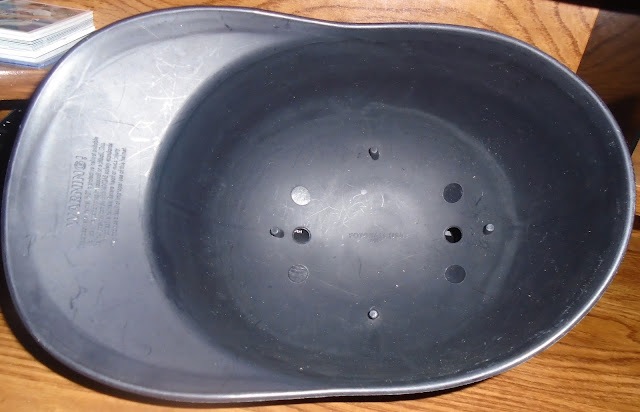 It didn't have the inner piece for it, and I had to decide if I wanted it. I was blinded by Dragonforce but in the end figured I had those other helmets and could used the inner piece from them if I needed to.  I decided to get it. 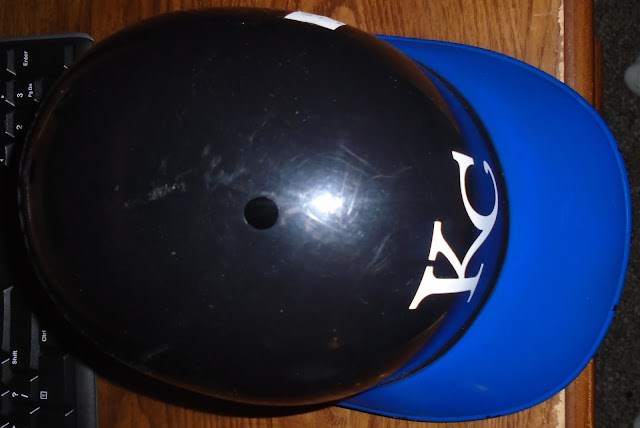 A few scuffs on it, but overall its in great shape.  I'm really glad I decided to get it.  Overall I spent 4 bucks on it and I think it was all money well spent.  I think I'll get good use out of all of the items.

When I got home and after I unpacked the items and put away groceries, I saw the mailman.  A package had arrived.  It was one I was expecting, the last of my Walmart shipment that came last week including the Roku.  These items weren't ones I needed but I still will get good use from them. 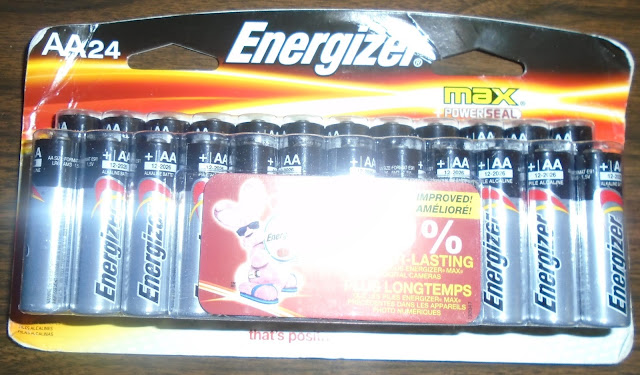 I mainly got these more as a filler item, but I did need some batteries.  These should last quite a while.  The price was also about the price an 8 pack at the local Walmart cost, so it was a good deal.

This last item I've been watching for a while and finally found a reason to get it. 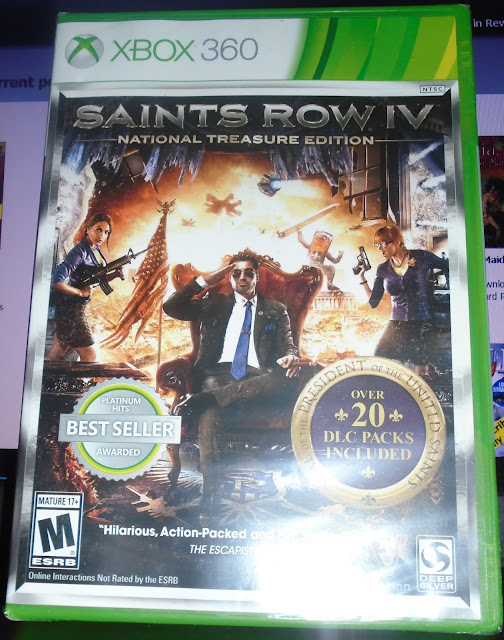 A couple years ago I pretty much beat Saints Row 4 shortly after the game came out.  However I only had the game due to a free trial to Gamefly and had to return it.  Since then, I didn't have much desire to get it, but I had an urge to play Saints Row 2 a few months ago (I don't own Saints Row 3) and when I did I curiously looked up 4 to see what it was going for.  I figured since it was on the 360, it wouldn't be much.  To my surprise they released special editions of the game including this version, the National Treasure Edition which essentially has everything included such as DLC of clothes, guns, and more.  It also had extra missions.  I got this for like 12 bucks, so playing just for a few days I think I got my money out of it already.  I forgot the aliens aspect of the game (which is pretty much most of the game) so its not as fun as I remember it, but I still enjoy it.  Especially getting to play How The Saints Saved Christmas DLC where you help Santa and get a Christmas gun as well as Santa's Sleigh as a vehicle and a Santa outfit as well as an Elf outfit.  Overall this extra stuff is all worth it, so I'm really happy.

I spend a couple hours a day playing it, then messing around with the Roku a couple hours, so I balance it all out.  Speaking of the Roku, I'm enjoying some of these channels, the news is fun, I watched news from Hawaii and then Tampa, then Louisville, KY the other night.  I have about 40 channels added so far all free, so I find stuff to watch.  I watched a movie last night which was terrible and the reason I didn't post this until tonight.  If you have the chance, stay far away from Joe Dirt 2.  It is a horrible movie.  How bad?  Well, I honestly think Kid Rock would have made the movie better.  Yeah, its that bad.  Everything right about the first one, made the second one worse.  I almost feel sorry for the actors as this was horrible.  I don't know why anyone would have agreed to be in this aside from Mark McGrath, who was probably the worst in the movie aside from Patrick Warburton, who I like.

Anyways, I better go for tonight, its late, and I kind of want to catch the new episode of Sports Jeopardy, as its one of the most anticipated shows I've already remind myself to catch.  I noticed the new one is up already so if I don't catch it tonight I might tomorrow.  Anyways, thanks for reading this and I hope everyone has a great week.  Oh, and listen to Dragonforce, it might make your week that much better.